I love period pieces, and I love Jane Austen film adaptations. When combined, there is typically a large gathering of talented writers, beautiful actresses, and a wealth of some of the most elaborate sets and costumes used to create a period appropriate rendering of the Victorian era. So, when I caught wind that someone was setting out to make a new film based on Jane Austen’s novella, Lady Susan, I jumped in without hesitation. I didn’t know a single thing about the story, I just put all my cards on the table, and dragged my sister to local multiplex for an early afternoon screening in early June.

The results were, from both myself and my sister, tepid at best, and in revisiting the film, I think I know why.

Love and Friendship is the story of Lady Susan, a woman who has developed a reputation in society for being an overly ambitious flirt and adulteress. The film opens with her escaping from the estate of one of the men of society, being chased by the man’s wife and the man, as he looks on in distress at her haste. From there, Lady Susan and her friend, whom she drags around and refuses to pay, make a visit at the home of her former husband’s brother’s estate, Churchill, where she decides to set her sights on seducing and potentially partnering with Lady Vernon, the lady of the house’s brother, in order to both make a mockery of him, and raise her status in society. At the same time, she must deal with the return of her daughter, Frederica, whom she cares about only in as far as whom she marries to secure their financial security, and little more, and her goofy suitor Sir James Martin. This all builds into an exchanging of nasty exchanges, the straining of various friendships and relationships, and a series of awkward, goofy situations that build intro a rather muted conclusion. 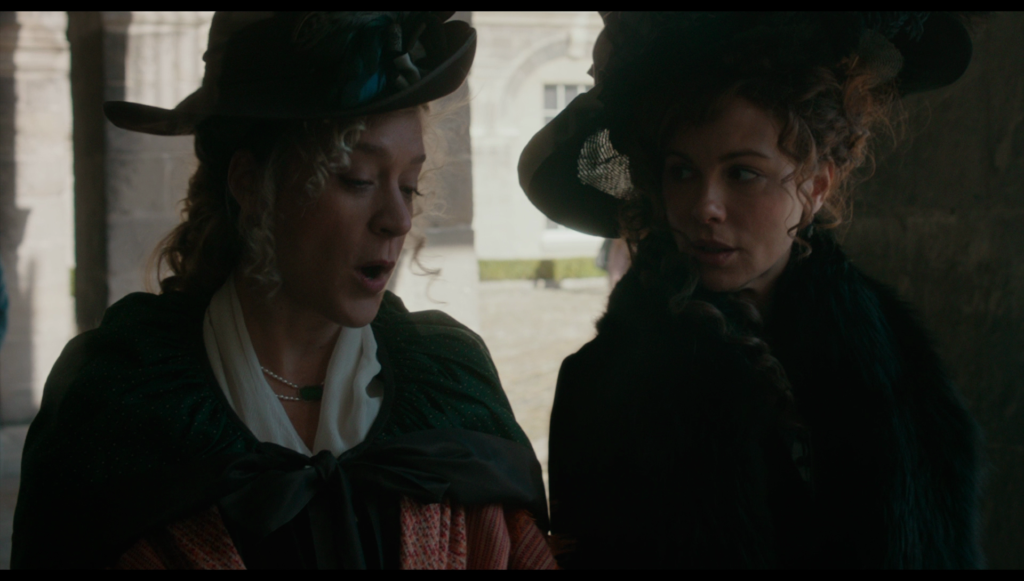 Love and Friendship, especially in the trailers, was billed as a comedy of sorts, and outside of a few interactions with the character James Martin – who is played delightfully by Tom Bennett, it isn’t an outwardly funny movie. Instead, the humor is buried behind some oddly contrasting choices of musical score, and a layer of deception and hostility, as Lady Susan, played with elegance by the always lovely Kate Beckinsale, does everything she possibly can to prove herself to be the smartest player in the high society game at the expense of her friends, and most astonishingly, her daughter. She is a truly awful person, and sometimes it is difficult to dig past that in order to find any humor in the situations presented on screen. Instead, it’s easier to look at the film as almost a caper of sorts, as Lady Susan plays multiple parties against each other, hiding under layers of deceit to mask her nefarious intentions, which in the end seem rather petty.

My first screening in theaters was spent trying to wade through the strangely inept supporting characters, who do little to stop Lady Susan in her conquest, and instead either fall into her traps, get ignored, or do everything they can to support her, to try and find that comedy that was promised – that was a big mistake. As long as you don’t go looking for laughs, Love and Friendship is an excellent period drama, with a fine supporting cast behind Beckinsale, filled out with the likes of Stephen Fry, Xavier Samuel, Emma Greenwell, and Chloe Sevigny as Lady Susan’s American best friend – a character that I feel must have played a more substantial role in earlier cuts of the film, but got somewhat marginalized on the way to the screen. Truly a shame. 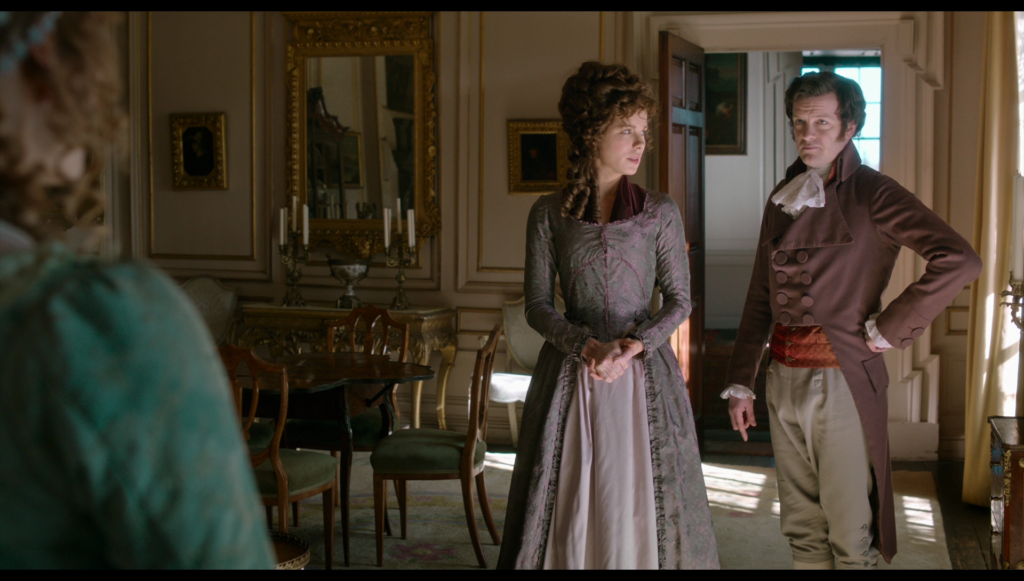 Even though the film is chocked full of wonderful period sets, and elegant costumes that help fully realize the world of Love and Friendship, it feels oddly modern. It feels almost like a reality TV program in the way it introduces characters and has them intersect, and if it wasn’t for the fact that the promotional material said so, I’d barely recognize it as an Austen story. The drama almost feels over the top at times, especially when the character Lady Manwaring is on screen. 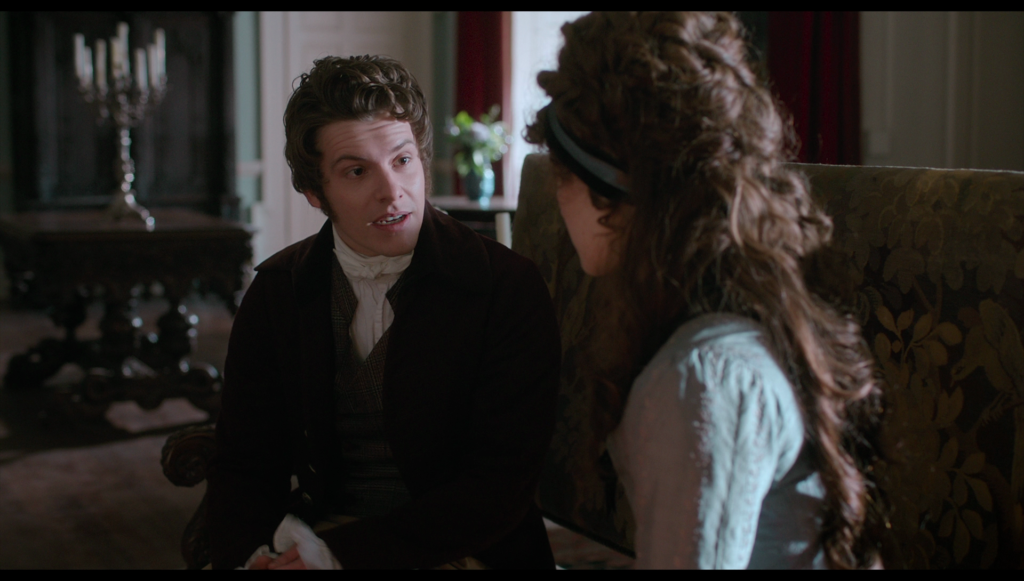 Overall, Love and Friendship is a competent, if not dry and ultimately uneventful adaptation of one of Jane Austen’s lesser known pieces of work, for good reason. The acting, set design, and costumes are par for the course for these types of productions, but I almost wish the film had taken the route that was depicted in the trailers – it would have felt far more fresh, rather than the kind of warn, been there – done that kind of period piece that we got. On my second pass at the film, I found that my opinion on the movie stands – tepid.

Love and Friendship was shot using the Arri Alexa digital camera, and finished in 2K resolution for theatrical projection in the 1.85:1 aspect ratio. Presented on Blu-ray in 1080p, the theatrical aspect ratio is maintained. 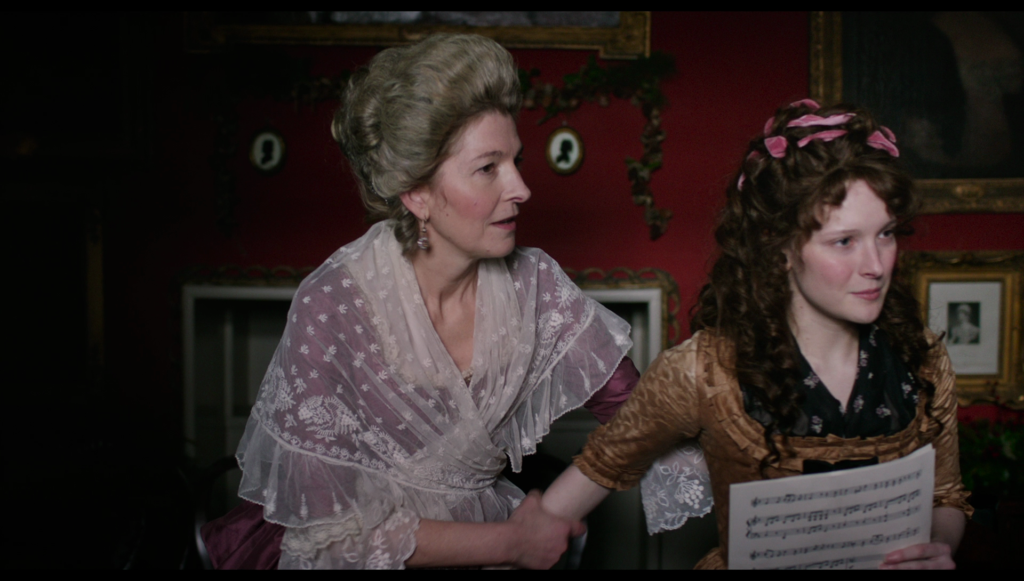 As if mirroring its cold, nefarious story, Love and Friendship proves to be a rather cold viewing experience. The costumes are elaborate, but never quite pop off the screen due to a rather muted color scheme of darker colors, set against a combination of shadows and natural lighting. As a result, Love and Friendship sometimes comes off as looking TV-esque in its depiction of the Victorian era, with flat lighting and very little contrast to go around. The digitally captured image however, is incredibly detailed, and razor sharp, with a noticeable layer of digital noise creeping into the shadowy interiors, and bright exterior sequences. Much like the film, this 1080p presentation is competent, if not unremarkable.

Love and Friendship is presented on Blu-ray with a 5.1 DTS-Master Audio surround sound presentation. 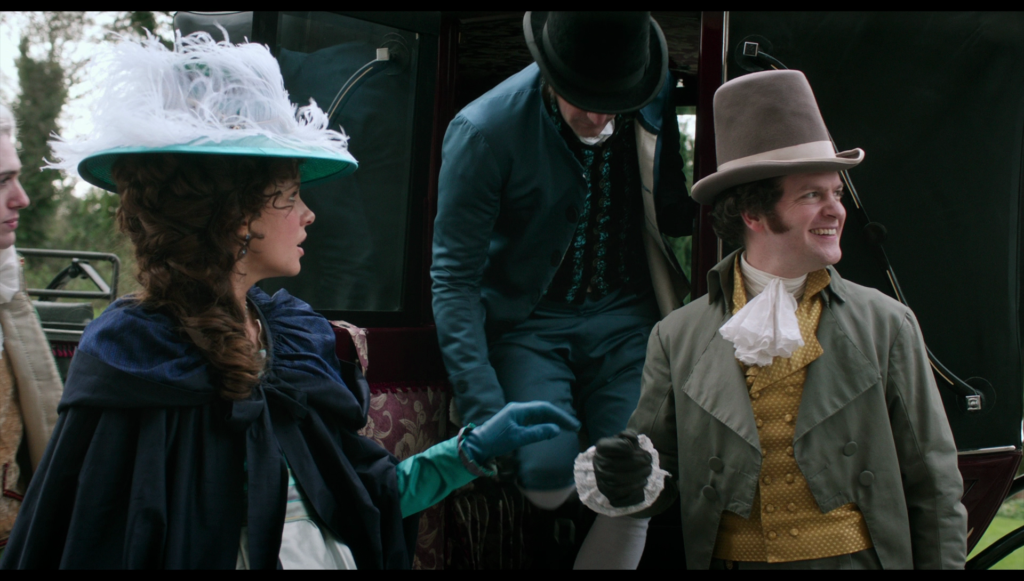 As it is a film driven almost entirely by dialogue, Love and Friendship has an appropriately limited soundtrack, which almost entirely resides in the front 3 channels, with no application of the subwoofer, and almost nothing being tossed to the surrounds. Dialogue is crisp and clear, and the film’s score, composed by Mark Suozzo, mostly resides in the left and right speakers, making room for the occasional piece of dialogue, or sound effect as horse carts move off screen, etc…. I didn’t expect much after seeing the film in theaters, and what we have here is adequate.

Love and Friendship has been released to Blu-ray by Sony Pictures Home Entertainment in a standard blue keepcase. The front artwork features a composite of a few of the main characters from the film, set against a painting of Victorian era buildings and a lovely blue sky. The back artwork features Lady Vernon and her closest friend, Alicia, as well as four still from the film, surrounded by a paragraph about the film, a list of the single feature included, technical specifications, and credits. The artwork is nice, but not incredible by any means.

Behind the Scenes of Love and Friendship – a ten minute feature that explores the making of the film, with the insight of the cast on the various characters and the nature of the film.

With only one feature to its name, and only decent artwork, this one is not a Blu-ray I would buy for value-added material. 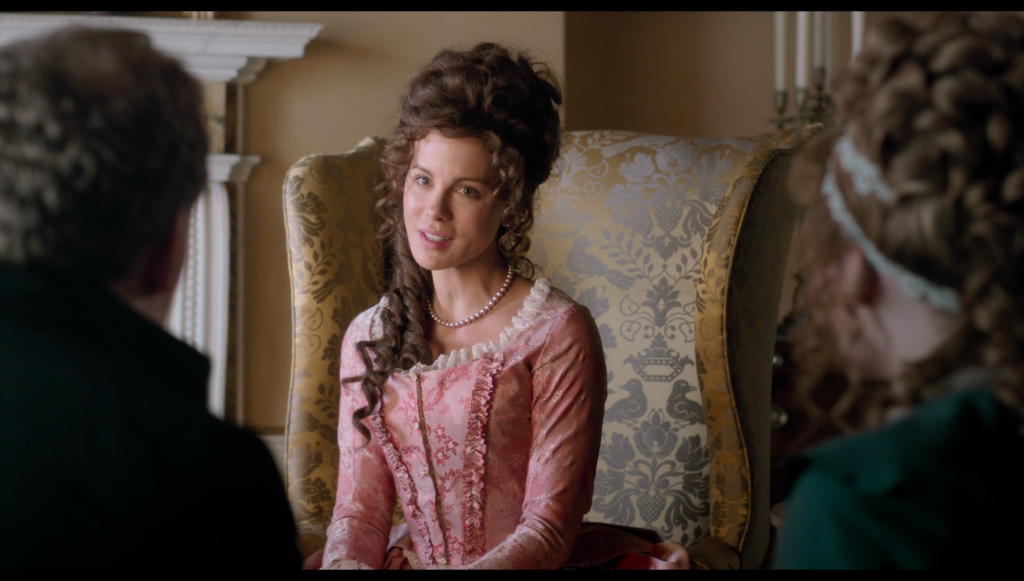 Love and Friendship is a serviceable, if not some times unlikable attempt at adapting one of Jane Austen’s more obscure works. The movie is put together wonderfully, but Lady Susan is such a cold and detestable character, that its tough to find anything in this film funny, which kind of hurts a film that was marketed as comedic. As for its Blu-ray, it features a sharp, but sometimes noisy image, and an adequate soundtrack, but the special feature leaves a bit to be desired. The package looks nice, but it can’t quite hold the weight of an otherwise unremarkable release from Sony Pictures Home Entertainment.