Following 2013’s Olympus Has Fallen, which was the clear winner in the great “White House terrorist attack movie contest of 2013” after beating out White House Down, London Has Fallen was a movie that I went into with high hopes. I had thoroughly enjoyed Olympus Has Fallen, and as a big fan of Die Hard-type movies, Olympus hit on all points for me. Sure, it wasn’t critically acclaimed, but it was a fun action flick with plenty of great one-liners, a great cast, and above average action scenes. Unfortunately, the sequel did not stand up to the first film at all.

One of the first things that stood out to me right away was the “cheap” feel that this movie had compared to its predecessor. In one of the opening scenes, there is an interaction between Vice President Trumbull (Morgan Freeman) and Secret Service Agent and our main character, Mike Banning (Gerard Butler). In their quick conversation, I am almost certain that neither of the actors was actually in the room at the same time. As Freeman’s character speaks, it looks as if he was dropped into a green screen backdrop, and Butler is never in sight, with the camera instead focusing on a close-up of Freeman’s Godly-mug. As the conversation ends and Freeman’s character walks away through a doorway, we only see the back of his body, and I am 100% that this was a body-double and not actually Morgan Freeman. Now, this happens a lot in movies, but wow, this one was bad. The body double was extremely short (Freeman is 6″ 2″) and had a horrible wig meant to look like Freeman’s hair. Sadly, this was just a sign of things to come.

The movie focuses on a massive terrorist attack on London, triggered by the death of the Prime Minister under suspicious circumstances and the subsequent funeral, attended by all of the major Western political leaders. Honestly, the entire premise is ridiculous. First off, if a world leader dies and it is in any way suspicious, there is NO chance that the entire world would convene on his funeral just days later until they investigate the death. Therefore, the entire situation that triggers the story would have been avoided. Once the plot is begrudgingly accepted, the rest of the film is not any better. The one-liners are non-existent, which is part of what made the first movie so fun, and the CGI has obviously been handled by the lowest bidder. This is especially apparent in the helicopter escape scene, as it looks terribly fake and is hard to watch.

That being said, there is still decent chemistry between Butler and Aaron Eckhart, who reprised his role as President, and the film is still a decent “shut your brain off” action movie, but that is not enough to save this movie from being a critical failure. Overall, London Has Fallen is quite the downgrade from Olympus Has Fallen, which was actually one of the better action movies of the decade so far. Sadly, I do believe that it is time to declare that this Franchise Has Fallen.

London Has Fallen was shot on a Red Epic Dragon, which provided a 6K base source, used to create the 2K Digital Intermediate. For a film of this caliber, Blu-ray quality is all that is needed, especially with a CGI-heavy experience which would not translate well to UHD. The video was standard for a 2016 title, with a very smooth, digital image. At times, especially at the beginning, the video looks almost too smooth, like a TV show more than a movie. As the story progresses and the scenes get to be more complex everything begins to look better, but the start of the film just looks off. In the movie’s closing acts, the scenes can be very dark, but the lighting and black levels stay true and nothing looks washed out or so dark that details cannot be made out.

The sub-par CGI is definitely a distraction in the video presentation, and even with the smooth digital presentation, it can be hard to take seriously and distracts from the rest of the image. Colors are pretty drab, which is partly a product of the London backdrop, and partly a product of the film’s attempt at a gritty feel. Overall, the video is above average in the wide scope of Blu-ray, but as compared to its new release counterparts, it falls a bit behind.

Where London Has Fallen truly shines is with its audio. Featuring the newest technology with a DTS:X main track, and a DTS-HD Master Audio 7.1 to back it up, the audio presentation is top notch. This is great news for a film like this, as sometimes a film that struggled to find an audience at the box office could be treated as a second-rate Blu-ray release and packaged with a bland 5.1 track. Thankfully, Universal recognized how powerful the audio would be in some of London Has Fallen’s best sequences, and it certainly packed a serious punch.

The surrounds were in full force, with bullets whizzing by at all angles and explosions pulsing around the room. The subwoofer action was especially impressive, and I was very happy that not only explosions, but also gunshots, punches, and each and every hard landing was captured effectively. As with most action movies, the audio track on this one comes highly recommended, and the future-proof DTS:X presentation will certainly not leave you wanting more.

London Has Fallen features just two short features, which is pretty disappointing for anyone spending $20 on release day. Unfortunately, this has all the makings of a future bargain bin title. Features are as follows:

As for packaging, London Has Fallen comes to Blu-ray with a nice holographic slipcover, featuring a two-disc Viva Elite keepcase with 1 Blu-ray, 1 DVD, and a digital copy that can be redeemed on iTunes and/or your favorite UV provider. Of note is the fact that the slipcover slides nicely on and off of the keepcase; a trait that is sadly not featured on many Blu-ray releases, for whatever reason that may be. 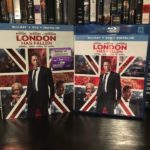 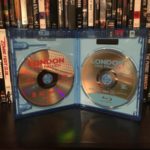 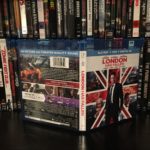 London Has Fallen is definitely a step backward for what could have been a budding franchise, and it is another box-office bust for Gerard Butler. The Blu-ray release offers some standard video and an above average audio track, but with the quality of the movie itself and the lack of any real special features or enticing packaging, this is a release that will see lower price points quickly. I would recommend picking this one up for the technical merits and for a decent movie to watch with friends and have some fun, but I would advise waiting some time and finding a good sale before grabbing London Has Fallen on Blu-ray.

Note: This Blu-ray was sent to us for review. This has not affected the review process or my opinions in any way. If you have questions on this process, feel free to email us at contactus@redvdit.com.