Lizzie is a 2018 American biographical thriller film that was directed by Craig William Macneill and written by Bryce Kass. The film is based on the true story of Lizzie Borden, who was accused and acquitted of the ax-murders of her father and stepmother in Fall River, Massachusetts in 1892. The film stars Chloe Sevigny, Kristen Stewart, Jay Huguley, Jamey Sheriday, Fiona Shaw, Kim Dickens, Denis O’Hare, and Jeff Perry.

Telling the story of the unmarried, 32-year-old woman Lizzie as she is a social outcast that’s been trapped under her austere, domineering father’s control. When Bridget Sullivan, a young maid who’s desperate for work, comes to live with the family, Lizzie finds in her a kindred spirit, and a chance intimacy that blossoms into a wicked plan, and a dark, unsettling end.

The film had its world premiere at the Sundance Film Festival on January 19, 2018. It was released on September 14, 2018, by Saban Films and Roadside Attractions. On October 28, 2015, it was announced that Chloe Sevigny and Kristen Stewart had been cast in an as yet untitled film about Lizzie Borden, with Pieter Van Hees set to direct from a script by Bryce Kass. Sevigny was cast to play Borden, with Stewart playing her live-in maid Bridget Sullivan. The film’s producer would be Naomi Despres, with Paytone executive producing. On May 12, 2016, Craig William Macneill came on board to direct the film. Principal photography for the film began on November 14, 2016, in Savannah, Georgia, and wrapped up on December 16, 2016.

Lizzie is a film that takes a completely new look into one of the more popular and widely known true-crime stories, and gives somewhat of an insight into the story as told from her eyes.  As much as I wanted to get into this story, I did have a good amount of problems as the overall pacing of the story seemed to drag on, and there being a significantly less centralization on the iconic act.  As much as I wanted to really get into the story, those problems created more of a distraction from everything and ultimately left myself wondering when we were going to get to the “good stuff”.  Chloe Sevigny’s performance was really well done, and her characterization of Lizzie Borden was on point with the various articles that I’ve read about her.  Kristen Stewart surprisingly showed some emotion in her performance as Bridget Sullivan, that I think there should have been more focus on those acts and the results of her actions with less direction geared toward the preceding events.

Overall, the 1080p presentation of Lizzie looked really great as I watched this in my living room.  The visuals that accompany the late 1800’s era helped with the overall setting for everything, and the general mannerisms that were executed by the characters were clearly observant and helped to allow with the presentation.  The only part that I had some problems with were when “the event” happened, as there wasn’t so much attention to detail during these scenes, and the struggle or hesitation that Lizzie feels while she’s swinging the axe could have been acted out a little better.  I’m sure there’s some being held back due to the lack of the historical details that are attributed to this, but I felt like Sevigney wasn’t really into her role with this particular part.

Packaged with an English DTS-HD Master Audio 5.1 mix, the Blu-ray release of Lizzie tries to offer an all out immersive experience for its viewers.  While there’s no use of the surround channels with this mix, the movie as a whole didn’t really call for their inclusion, allowing for the primary focus to be in the front and rear channels of the track.  The transitions between those channels were effortless and did a really good job at placing the audience in the middle of the story; while the dialogue is spoken cleanly enough to ensure that everybody could be heard and understood without the need to manually adjust the volume levels.

The Blu-ray release of Lizzie comes packaged in your standard single-disc Blu-ray amaray case.  Within the case is the standard Blu-ray copy of the movie, the disc featuring a piece of artwork that’s related to the movie and completely different from that of what’s on the case.  There are no DVD copies of the movie included with this release; but, there is a digital copy redemption pamphlet for the various streaming platforms.  There is also a slipcover that’s been included in the original pressing of the release that features the same artwork that’s been provided on the case. 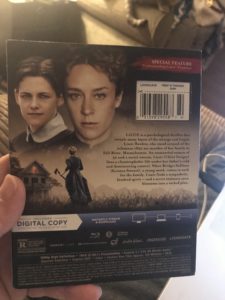 The Blu-ray release of Lizzie is considerably lacking in terms of additional content.  There is a single feature that’s been included that offers some insight into the story of Lizzie Borden, and I really would have liked to have seen just a little more in this aspect, as well as some of the shared experiences that were had with the cast and crew members as they worked to portray this re-telling of her story.  Included with this release is:

Overall, Lizzie wasn’t a great movie, nor was it a nightmare.  I did have some problems with the pacing of the film, and the ultimate end game that was delivered.  However, this is a story that’s been on my radar for quite some time now and is something that I’m sure I’ll do some more reading into in the future.  The overall visual and audible presentation of the Blu-ray release was on par with what I personally expected, with nothing really standing out from other parts of the movies.  There really should have been more included in the special features area of the release.  If you’re considering this release for your collection, I’d recommend checking it out before you commit to adding it to your personal library.  Lizzie will be available on Blu-ray and DVD tomorrow.