As a long-time member of the Reddit community, I was extremely excited to check out Lights Out, the feature-length debut of Director David Sandberg. Sandberg had originally created his short film Lights Out for a short film competition, where it lost out on the grand prize. However, it was also posted to YouTube, and soon after it was posted to Reddit, where the film quickly gained tons of traction and views, and was talked about for days on the popular social media site. Soon after, Sandberg was contacted by multiple Hollywood agents, and began production on a feature length version of the story, with horror movie heavyweight James Wan (The Conjuring, Saw, Insidious) as Producer. The original short film is still on YouTube and can be watched here. I highly recommend checking it out.

Lights Out was released to theaters in July of 2016 and went on to gross over $147 million at the worldwide box office on a budget of just under $5 million. A sequel was greenlit immediately after opening weekend, and Sandberg was also given the director’s seat for the upcoming Annabelle 2. As far as Hollywood success stories go, this is as cool as it gets.

Lights Out follows such an interesting story and premise that I actually can’t believe it had not been done before in the horror genre. The fear of the darkness is such a primal instinct that a film like this will hit even the hardest horror fans with some very serious scares. The film tells us the story of a typical family haunted by a supernatural presence. When the father, Paul,  is murdered at his textile factory late one night by a demon that only manifests in the dark, the same demonic force begins to terrorize Paul’s wife, the mentally ill Sophie (Maria Bello), and their son Martin (Gabriel Bateman). Older daughter Rebecca (Teresa Palmer), the typical rebellious 20-something, is called to pick up Martin at school after he complains about the issues at home with his mother, and Rebecca soon learns that the same demon she fought off as a younger girl has come back to terrorize her brother. As the family fights the demon inside their house, keeping the lights on wherever they can, Rebecca investigates the demonic presence and finds some shocking information about her family’s past. 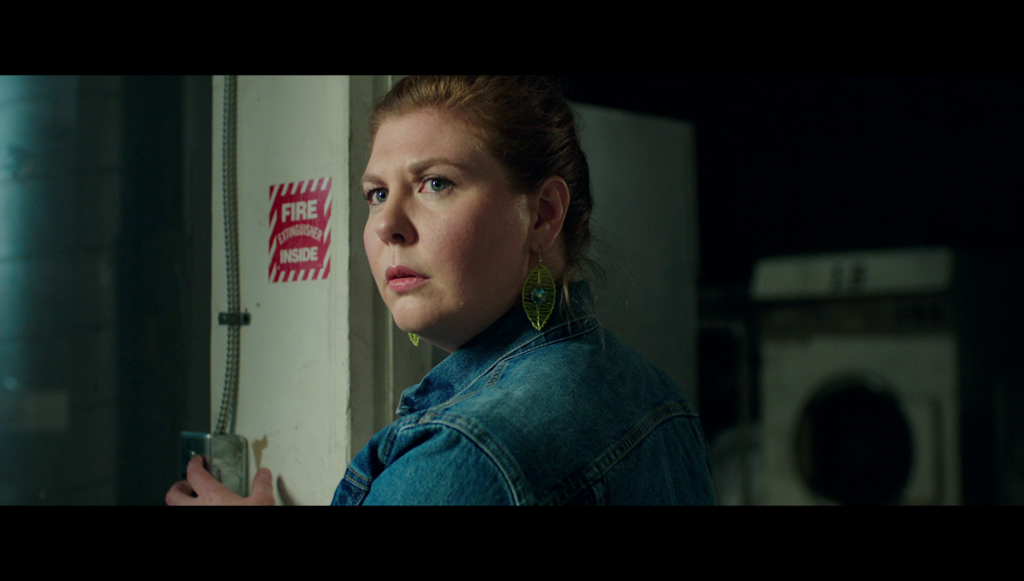 Lights Out is extremely effective, quickly paced (coming in at just 81 minutes), and terrifying. The jump scares are spread evenly throughout the film and definitely catch the audience off-guard, but they are not relied upon. There is a deeper, psychological fear of the dark, and the way that this movie utilizes light, and the lack thereof, as the driving force of terror is extremely impressive. For a feature length debut, Sandberg comes off as a seasoned veteran of the horror genre, hitting all of the right marks and keeping me enthralled for the entire run of the film. The performances by the small cast are all good enough, and overall, it is an excellent debut. 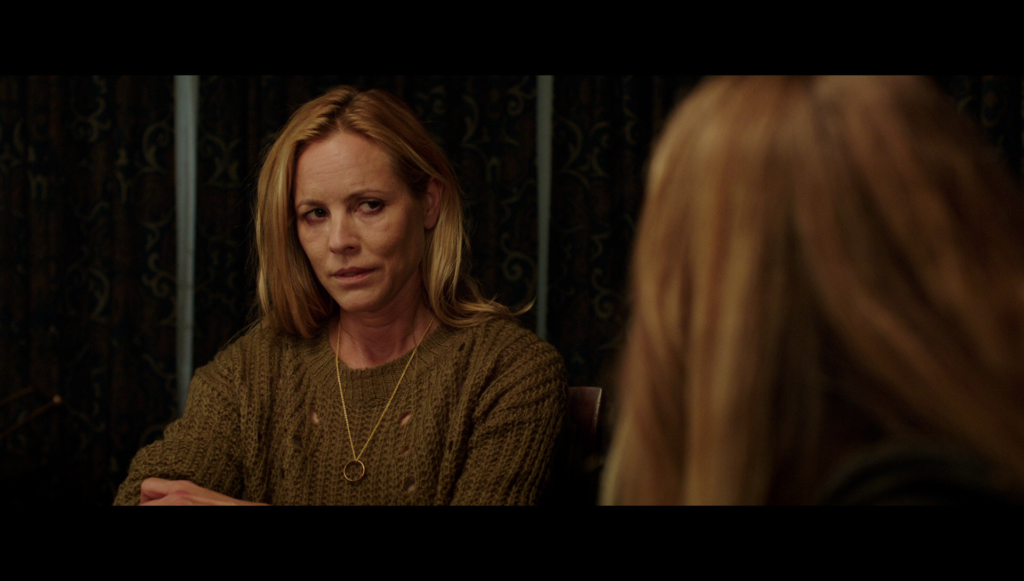 I am interested to see where a sequel would take us, as this story seemed fairly cut and dry and came to a solid conclusion. The initial ending would have led directly into a sequel, but it was revised after scoring poorly with test audiences, and so now the ending really wraps things up nicely. Most likely, the sequel will need to focus on another original story, or maybe a story from the past, like Rebecca’s fight with the demon in the years before the events of Lights Out. I saw a ton of promise in David Sandberg’s abilities to craft an engaging and original horror story, and I am looking forward to what comes next, starting with Annabelle 2, which has plenty of room to improve on the original. Lights Out isn’t perfect, but as a Hollywood debut, this is a very strong entry into the genre and a film which everyone can appreciate because it tackles one of mankind’s greatest fears. Just make sure you replace your lightbulbs after watching this one; you’ll want to keep your lights on for a few days.

Lights Out was shot on Arri Alexa cameras at a resolution of 2.8K, with the final product rendered at 2K for theaters. According to IMDb, most of the effects in this movie were practical, with a limited use of CGI, meaning that the picture is extremely realistic and lifelike; even the demon who stalks our protagonists looks excellent. There was also a note on IMDb about the way the film was lit, where some scenes were shot only using candles or fluorescent lights that were available to the actors in that scene. This makes for a dark, but extremely creepy and unnerving visual experience that constantly keeps viewers on the edge of their seats. However, as dark as the film may get at times, there is never any visual acuity lost that hinders the experience. At times you will feel as if you are completely in the dark with this film, but I believe that this is exactly the environment which Sandberg wanted to create, where you feel as vulnerable as the characters, cautiously moving around each corner. 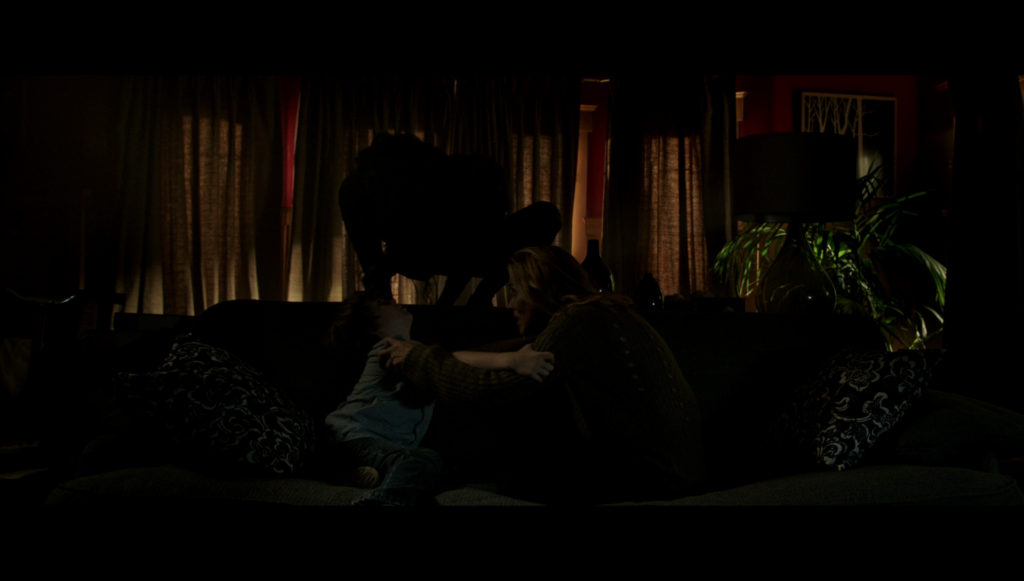 For those looking for a UHD version of this film, I would suggest avoiding the new technology on any platform when it comes to Lights Out. There is no UHD copy available as a physical media purchase, but even if one comes to market down the line, I would skip it. As you can see below, Sandberg himself saw a lot of flaws with the UHD copy available on streaming sites. This complaint would not be unique to this movie, and it does continue to prove the point that the upscaled 4K resolution on many films that are rendered in 2K is actually a downgrade in quality when compared to the 1080p Blu-ray. As we progress further into the world of UHD, I feel that the only real advantage for the majority of films is the HDR technology, and the resolution is actually a negative. What we need is an HDR Blu-ray, without the 4K resolution,

Ugh, there's a UHD upscale of Lights Out for sale on one of the VOD sites. It wasn't shot in 4K so it's over sharpened like crazy.

Audio is so important in horror films, and Lights Out delivers an excellent audio experience. With the vast majority of the film taking place inside one household, there is not a large sound stage for your home theater to push out crushing sound, but it delivers an immersive experience which keeps you engaged and on the edge of your seat. The bass action was excellent, with low sounds like knocks on a door, footsteps on the ceiling above, or demonic groans booming through my PB-2000 subwoofer. The DTS-HD Master Audio 5.1 track sounds great, with dialogue extremely clear, and surround sound action closing in on you at every turn. The film’s score is appropriately creepy and unnerving, and there are plenty of jump scares which rely on audio cues as well as visual ones, so for the best experience, I suggest watching Lights Out with the volume turned up; it will truly terrify you. 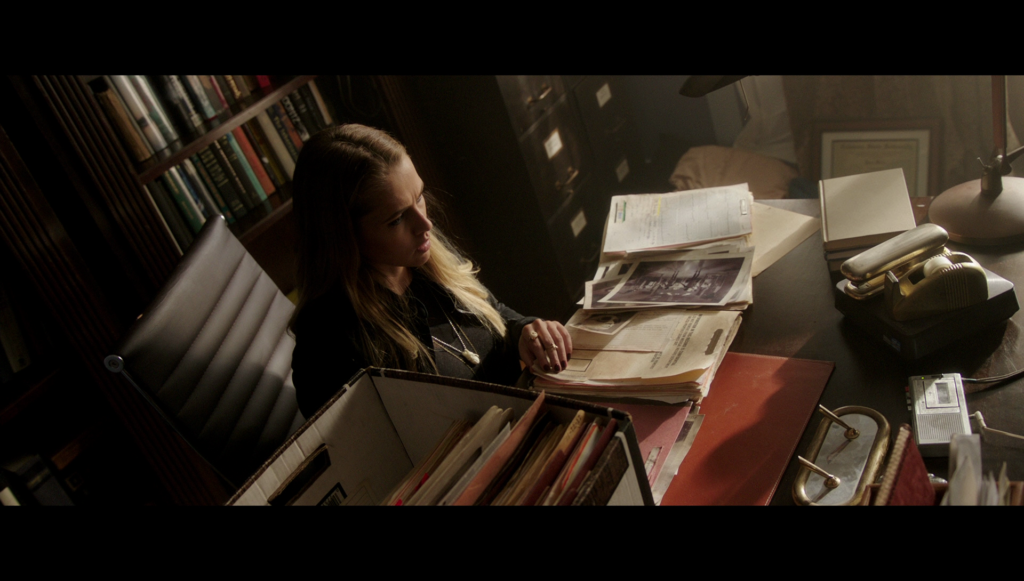 A film like this should receive better treatment on the home media release, as there are so many options for unique packaging or excellent artwork that Warner Brothers could have used for Lights Out, and yet, they declined to do anything special at all. The Blu-ray comes in a single disc eco-case, with no DVD, and a digital copy that can be redeemed on iTunes or UV services. The artwork is pretty much the same as the theatrical poster, and there is no slipcover included, even at the first print run. Warner Brothers continues to deliver great movie experiences, but their lack of focus on the packaging is hugely disappointing for collectors, as they treat even their newest releases as nothing more than older catalog titles in plain, boring, and flimsy packages. There is still money to be made in physical media, especially in the horror genre, but Warner Brothers packages their Blu-ray releases so poorly that they look like bargain bin titles rather than a hot new release. 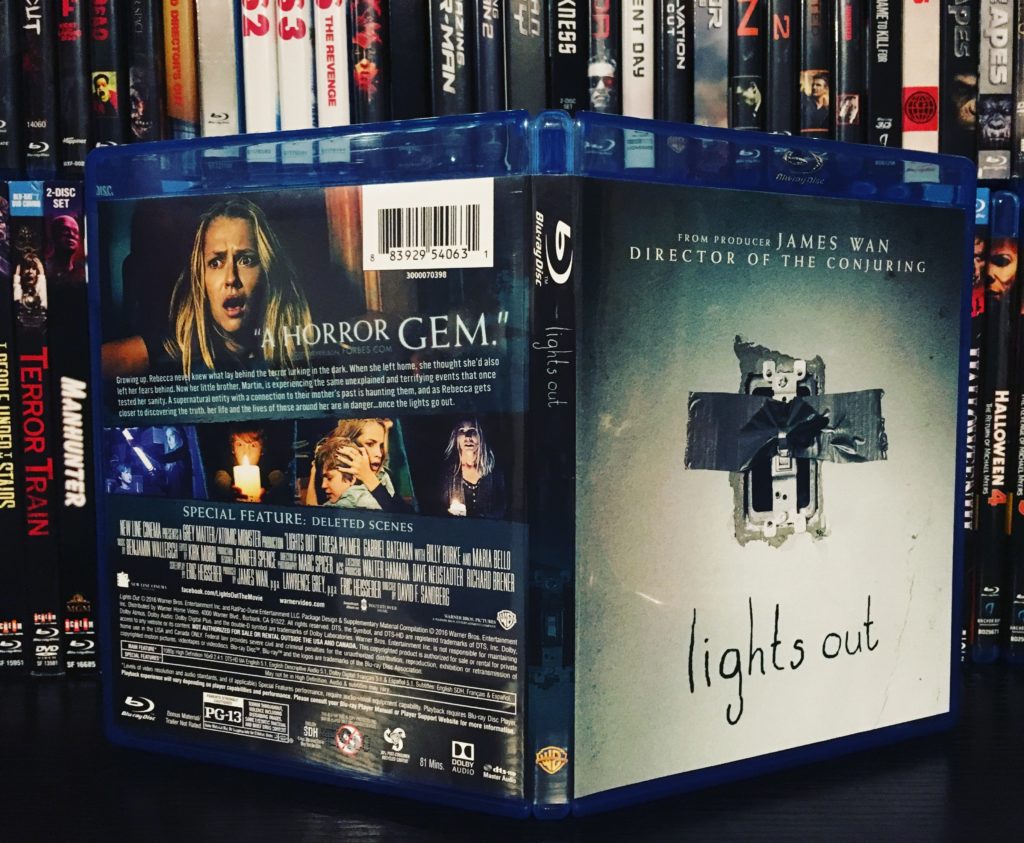 The special features for this release are not much better, with just a set of deleted scenes available on the disc. However, the deleted scenes do feature the alternate ending, so definitely check that out and form your own opinion on what works better. Thankfully, David Sandberg has mentioned on Twitter that he has plenty of behind the scenes footage, and he will likely post them to YouTube or Vimeo in the coming months. Why Warner Brothers did not reach out to him or include this material on the Blu-ray is confusing, but it looks like those who want an inside look will need to go to the Director rather than the billion-dollar studio.

Can you tell I’m frustrated? Warner Brothers – you need to do more. Packaging your titles with flimsy eco-cases, no slipcover, and no attention to artwork or special features is a great way to kill your physical media sales. There is so much that can be done for little cost that would greatly improve this product, but instead everything looks so cheap. These releases do not appeal to collectors outside of those who simply buy Blu-rays for the movie quality. For the average person this is fine, but a little bit of effort would go a long way to promote more sales.

Lights Out is a very strong debut for David Sandberg and a nice addition to the growing list of original horror films that have dominated the last decade. Horror continues to be the only genre that consistently produces new Hollywood names, original stories, and excellent box office returns. Lights Out features some excellent visual and audio merits, and even though the packaging and special features do not warrant a Day One purchase, the ability to support a new director and his vision and also to support the horror genre are reasons enough the recommend a purchase. This would be an excellent movie to watch leading up to Halloween, and one that you can go back to over and over for excellent horror fare. You can find Lights Out on Amazon, or at retailers everywhere.