Every once in a while, a movie comes my way that reminds me how refreshing it can be to take a step back from the Hollywood studio system, one which takes everything to extremes and goes almost too far in order to draw us into the theaters. Sometimes, a movie comes my way that offers a fresh perspective, and reminds me that not everything has to be politically charged, action packed, or loud in order to move me. Les Cowboys, directed by Thomas Bidegain, is one of those movies. 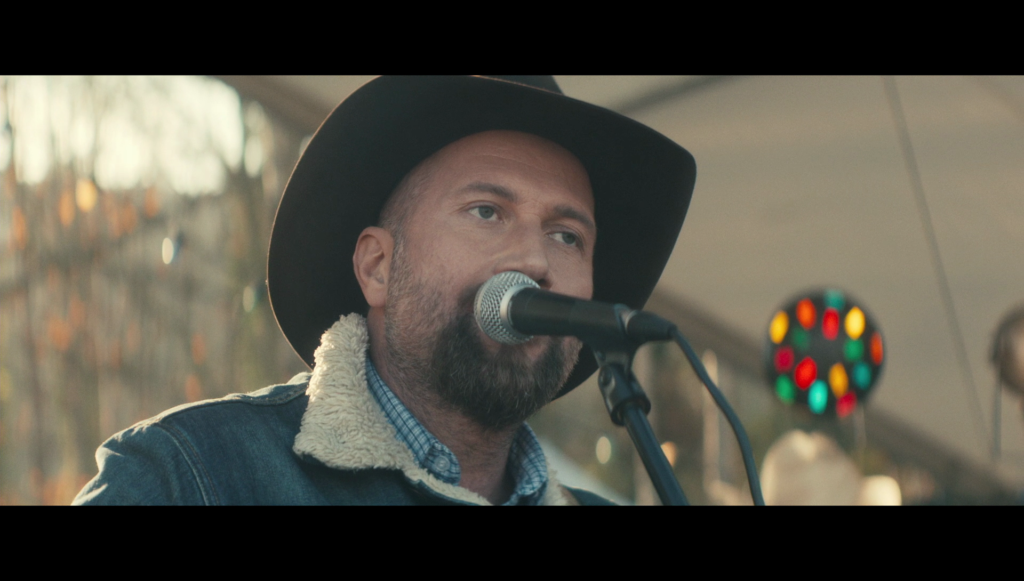 Les Cowboys is the story of a traditional French family, of a couple with a son and a daughter, who happen to love the American country western lifestyle, going as far as attending a yearly fair of sorts that celebrates these southern ideals with music, appropriate activities, and food. While attending one of their fairs, their daughter Kelly goes missing, prompting an intense investigation involving political ministers and even police in order to find her. The father, Alain, drops everything to find his daughter, following a trail that leads him to believe that his daughter has run off with her boyfriend to join an underground Islamic state. Along with his son, Kid, he follows every possible tip, piece of evidence, and amount of hearsay he can pick up, driving him to the edge of reason. When he is no longer able to continue the search, Kid picks up where he left off, following the trail to Kelly into the Middle East, as the situation in that area of the world tenses up in a post-9/11 climate, stopping at nothing to find his sister. 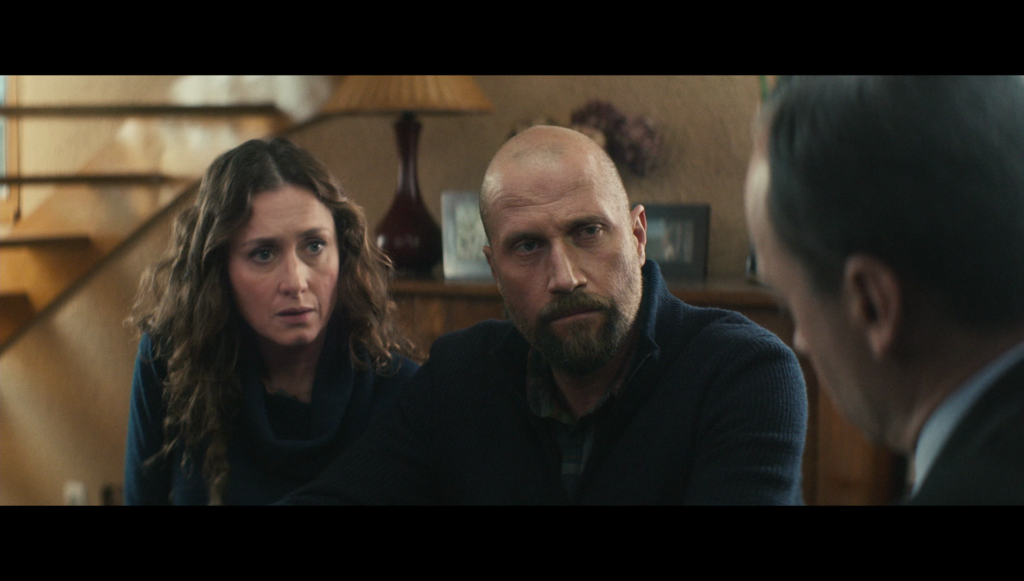 Les Cowboys is a film about desperation and loss, about dedication to one’s family. The film is essentially split into two distinct halves, one which shows us how the loss of Kelly destroys Alain’s life – his family, his career, his social responsibilities all decay in his thirst to find her, and how the search for Kelly allows the now adult Kid to find himself as he makes and breaks alliances and sacrifices everything, ultimately finding comfort and love in the midst of his quest. The film is carried on the shoulders of Francois Damiens, who plains Alain as a broken hearted, desperate man, blind to everything that doesn’t have to do with his lost daughter, and Finnegan Oldfield, who plays the role of the adult Kid, dedicating his life to finishing his father’s quest, and finding his own purpose along the way. 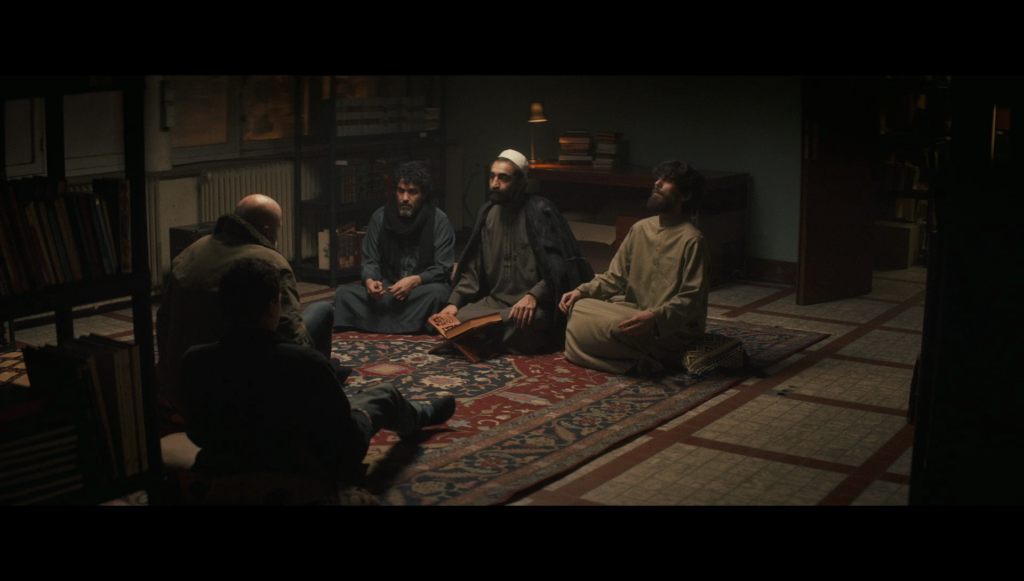 What’s so incredible about this film, beyond the relatable story of a family who does everything they can to find a lost member, is that it is mostly objective about the societies it portrays, presenting the Islamic world not as one full of terrorist monsters, but just one of separate ideals. Not once through the film’s 104 minute runtime does it ever suggest that these people are bad, but just that Alain, and later Kid, just don’t fully understand them, or why Kelly would just to run off with them. The script is smart, provoking emotion through intelligent dialogue rather than inflammatory sequences of violence or evil. It just feels like the antithesis of how American filmmakers would approach this topic. It feels detached from politics and rather is driven by a very contained level of emotion that allows it to shine on its own two feet, rather than play off of existing sentiments and modern depictions of the Middle East.

The movie is incredibly well edited, and the pacing is spot on – the movie just flew by, allowing us to focus in on the drastic measures these two gentlemen took to carry out their investigation, and the impacts it had on their lives. The film’s score, composed by Raphael Haroche, is quiet, but intense and moving in just the right ways, and the cinematography of Arnaud Potier is intimate, but occasionally opens up to allow us to get a solid glimpse of the scale of the larger than life locations that the journey takes us to. 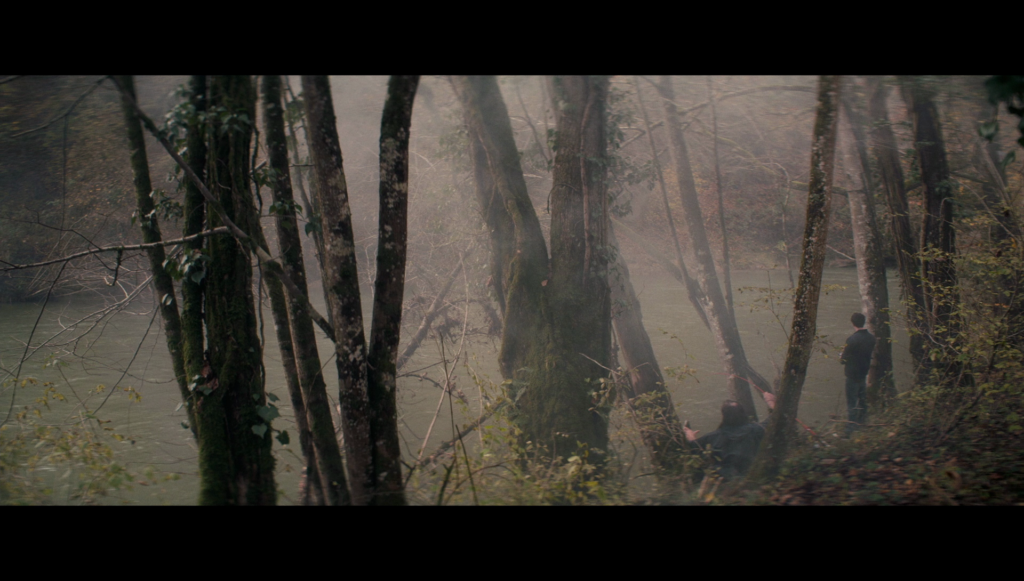 Les Cowboys is a focused, tense and incredibly satisfying film. It’s powerful, but tightly scripted and edited in a way that keeps you 100% engaged throughout the entire feature. It’s story is one of passion, led by two powerful lead actors and an incredible cast of supporting members who bring the phenomenal story to life. It stands as one of the best films of last year, bringing a new level of maturity to this kind of story, one I hope to see more of soon.

Les Cowboys was shot digitally using the Arri Alexa camera, and according to IMDB, utilized anamorphic lenses to create the image of the film. If I was to speculate, Les Cowboys was most likely finished in 2K, with a final aspect ratio of 2.35:1. The film on home video is presented in 1080p, maintaining that 2.35:1 aspect ratio.

Les Cowboys has a very distinct look to it, one typical of the older anamorphic lenses of the 60s and 70s, with an incredibly shallow depth of field and odd distortions that give it a very imperfect look around the edges. The image lacks sharpness, but is not a soft image by any means, with good detail present in mid and close up shots. Color is healthy but muted at times. Nighttime exposures and low light sequences bring out some ugly video noise, but other than that Les Cowboys brings a rock solid digital video transfer to the table.

Les Cowboys features a DTS-Master Audio 5.1 surround soundtrack in a multitude of languages, but primarily French. The feature is presented with English subtitles as a result. 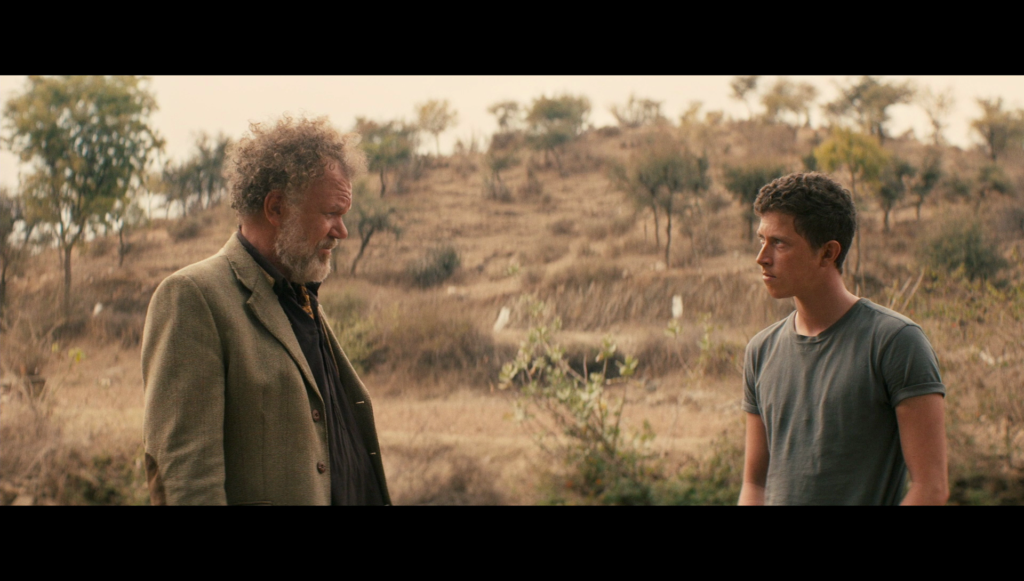 This film starts with a large Country festival of sorts, and immediately fills the room with comfortable, natural sound. Crowds and music envelope you through surround activity, and sound effects drift from one front speaker to the next in a very natural way. This holds through the rest of the feature, as cars frequently zoom across the highway, and we find our two leads in crowded areas full of life. Subwoofer activity is minimal outside of a few short bursts, but all in all, Les Cowboys sounds great.

Les Cowboys, released to home video by Cohen Media Group, is packaged in a standard keepcase. The case’s front artwork features a throwback style awards poster paying homage to the John Wayne film The Cowboys that features our two main leads, as well as popular actor John C. Reiley who appears in a small role, as well as a group of Islamic men riding horses below the film’s title. It makes the film out to be far more of a western than it actually is, but it looks pretty cool. The image is surrounded by the typical red and black Cohen border. The back artwork features a few character stills from the film, a few quotes, a paragraph about the film, a list of features, credits and some technical info surrounded by the red and black border. Inside the case is a lovely full color booklet, featuring full color stills, credits, a cast list and a chapter guide. The inside artwork features a lovely still of John C. Reiley and Finnegan Oldfield looking out over a body of water while resting somewhere in the Middle East. All in all another great package job from Cohen. 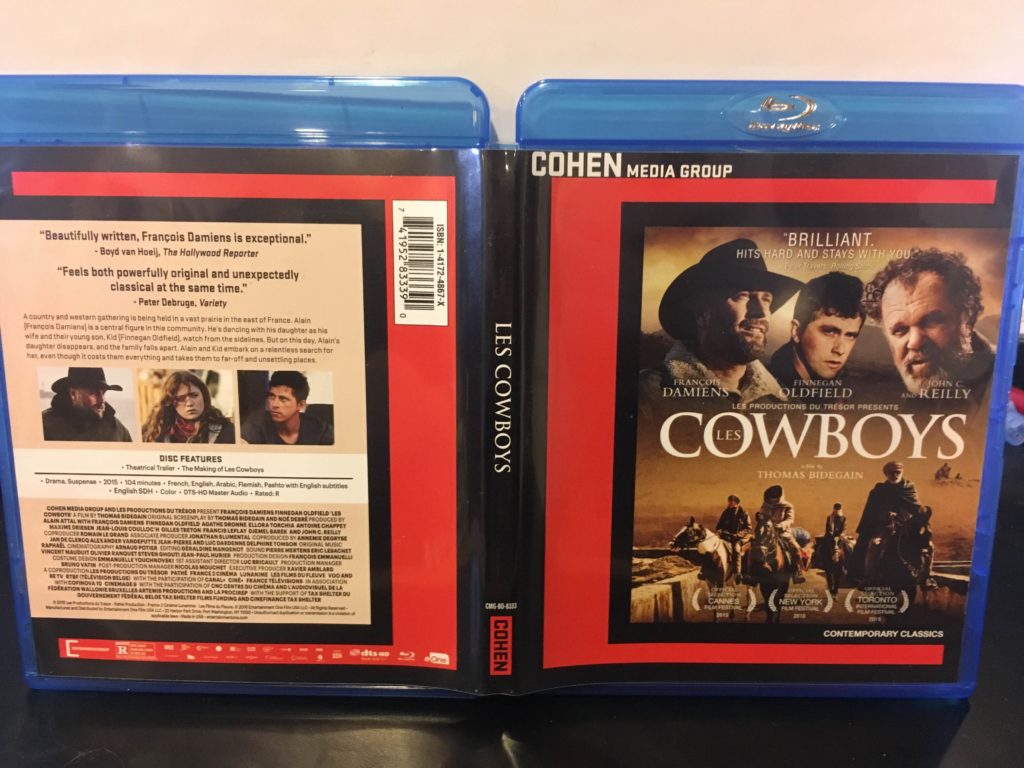 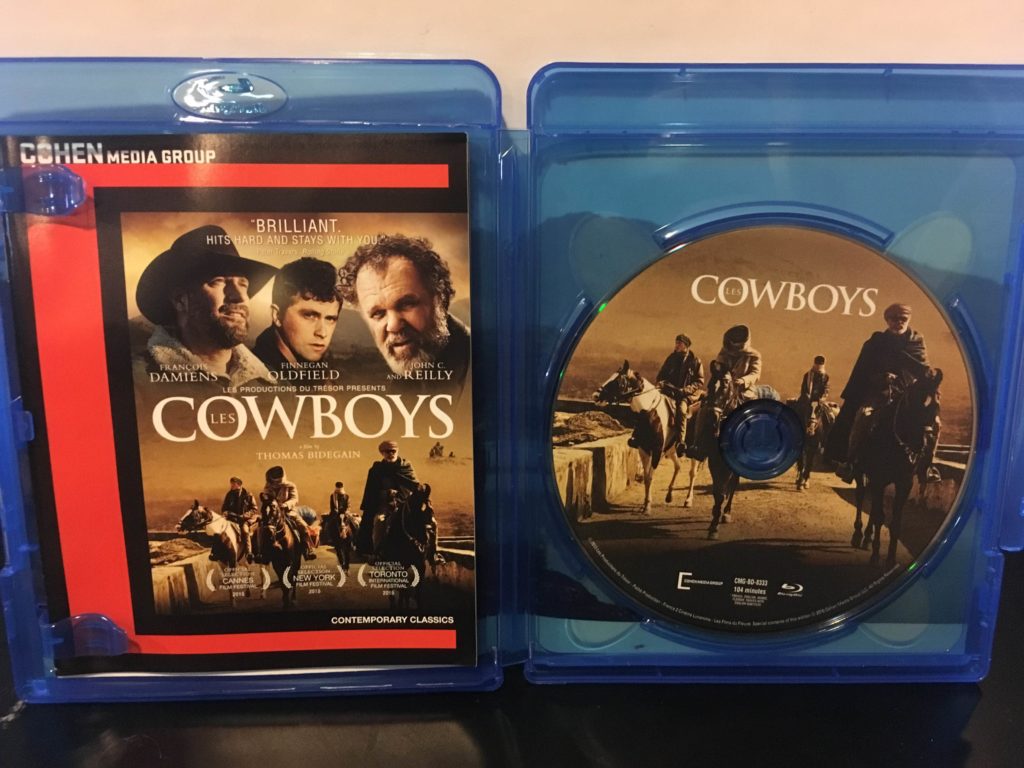 The Making of Les Cowboys – a 35 minute in depth feature which follows the development of the story and the production of the film, prepared by Pathe for the film’s other home video releases. 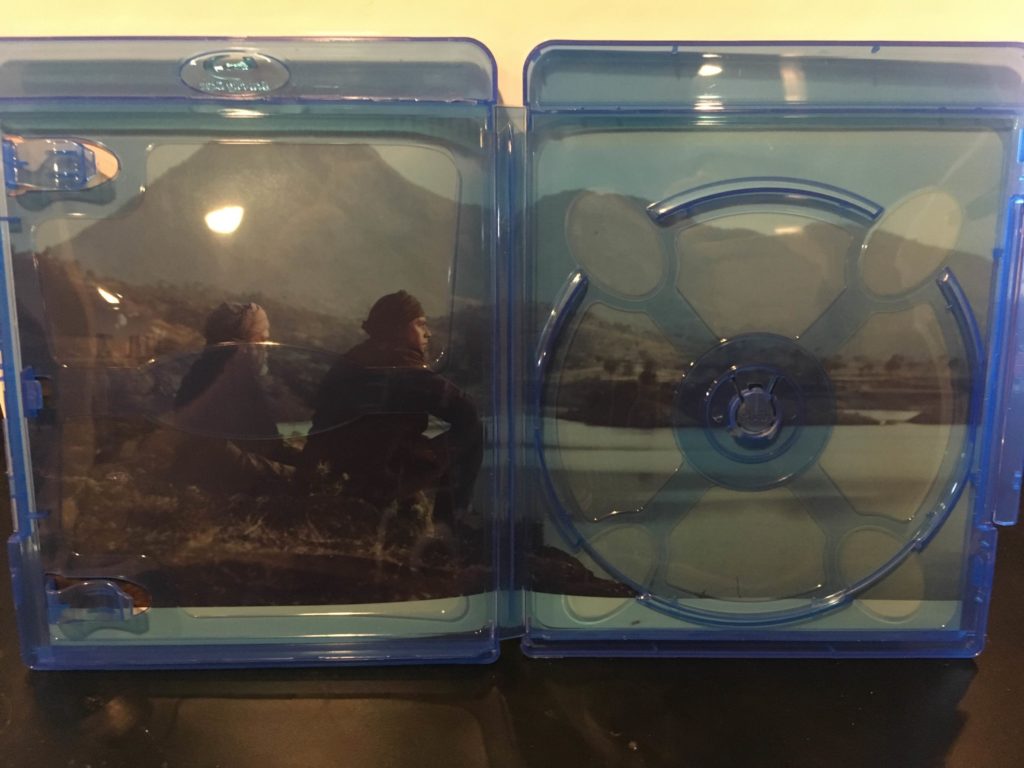 For a film as good as this one, I wish there had been more in the area of special features, but that’s really not Cohen’s way. It does however have an excellent package to go with it, so that somewhat makes up for it.

Les Cowboys instantly has become one of my favorite movies to release to home video stateside this year. The film is tightly constructed, brilliantly acted, and an overall engaging story about a father and son who stop at nothing to find their daughter/sister, eroding away any sense of real life they have in the process. It’s like The Searchers, but darker and more effective. It’s home video release features excellent video and audio transfers, as well as a criminally light serving of extras, and fantastic Cohen Media Group packaging. This is an absolutely recommended release.