I have to say that I probably looked too much into the box office returns when I went into watching this movie, because I was pleasantly surprised by Kung Fu Panda 3, and I found it to be one of the best animated movies of 2016. It is right up there with Zootopia (although Zootopia is superior still), and definitely better than stinkers like Norm of the North or The Angry Birds Movie. I really found myself entertained throughout the film, and especially enjoyed the excellent cast, including Jack Black, Seth Rogen, J.K. Simmons, Bryan Cranston, Angelina Jolie, Jackie Chan, and many many others; the list truly is an impressive one.

The story focuses on the struggle between Po (Jack Black) and Kai (J.K. Simmons), who wants to end Kung Fu once and for all. Po stumbles upon a secret village of pandas while trying to find himself, and he is tasked with training them in Kung Fu so that they may defend themselves against Kai. Hilarity ensues, and the training scenes are especially funny. In fact, the adolescent pandas deliver some of the funniest moments in the movies, and it is a great movie for watching with kids. The entire family is guaranteed laughs, as there are jokes for both the adults and the kids. I definitely recommend Kung Fu Panda 3 for your next family movie night.

Kung Fu Panda 3 is a digitally animated movie, meaning that it was finished in 2K for theatrical distribution, and makes perfect use of the Blu-ray’s HD resolution. Animation does not require anything higher than 2K resolution at the moment, as digital animation uses that as a standard, so the Blu-ray copy of this movie is as good as this movie could ever look, and damn does it look great. The entire Kung Fu Panda series has been an extremely colorful one, and this release looks excellent on my 55″ Sony TV. I was especially impressed by the little things; the flower petals, the kimonos, the shimmering green of Kai’s “Chi” monsters. Overall, like most animated films, Kung Fu Panda 3 is a stunning visual adventure on Blu-ray, and will certainly push your home theater to the max.

I believe that this is as good a place as any to introduce my new audio system for my personal home theater/review studio, and let our readers know how I am currently reviewing Blu-rays. Last week, I installed an SVS Prime Tower 5.1 Home Theater system, paired with a PB-2000 subwoofer from SVS, and a Sony STR-DN860 Receiver. So far, it has been an excellent experience, and they come highly recommended!

Kung Fu Panda 3 packs a punch (ha-ha, get it?) with a DTS-HD Master Audio 7.1 track. Obviously, this is a great use of the Blu-ray technology and provides a top notch audio experience. I have absolutely no complaints on the audio for this release, and with a similarly stunning visual experience, Kung Fu Panda 3 is a technical marvel, on par with many of the recent Disney/Pixar Blu-ray releases.

One of the best parts of the audio is J.K. Simmons’ performance as the evil Kai. Simmons has a commanding voice; one that captures a room and demands attention. Every time that Kai spoke, I could feel the deep baritone quality of Simmons’ voice over the center speaker and my new PB-2000 subwoofer. The PB-2000 subwoofer from SVS offers some of the truest bass I have ever heard, and the Kung Fu Panda 3 audio mix perfectly mixes Simmons’ voice between the center channel and the subwoofer. If you are a bass head, just listening to Kai speak is an enjoyable experience.

Kung Fu Panda 3 comes in a typical slipcover/amaray case packaging. With this release, you get a Blu-ray discs, a DVD copy of the movie, and a Digital HD code for redemption on either iTunes or your favorite UV service. There are some nice little things that made me smile with this packaging, like the original artwork on both the DVD and Blu-ray discs, and a small little “Paper Panda” origami kit on the inside; great for kids or those of us who never grew up! 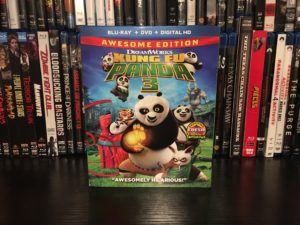 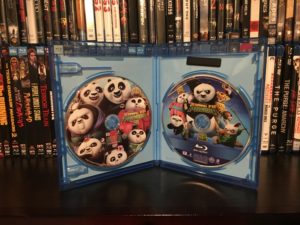 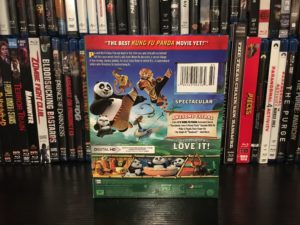 As for features, Kung Fu Panda 3 is a little light compared to other animated movies from studios like Disney, Pixar, Ghibli, etc. – but it comes with enough to keep everyone entertained, with two new animated shorts and a few other short featurettes. Included are as follows:

Overall, Kung Fu Panda 3 was a lot of fun – even without kids – and I do think that it would be an excellent choice for family movie night. Kids are sure to love this one, and adults can relate to some of the more mature themes throughout the story. You can find this Blu-ray release on Amazon here, and it comes recommended for its audio/visual merits as well as its above average storyline.