Asking someone their favorite Christmas movie can yield a plethora of different answers. The numerous comedies like Christmas Vacation, A Christmas Story, Elf, an action film in Die Hard, or even a creature feature with Gremlins. Now though, us die hard horror fans have something to truly call our own around the holidays, the perfect combination of family Christmas comedy and full fledged horror. In late 2015, a week before Star Wars overshadowing of the cinemas, Michael Dougherty gave us the best Christmas present of all, Krampus!

I am so very happy to say that Michael Dougherty, responsible for the absolutely great horror anthology Trick R’ Treat has once again knocked it out of the park with a holiday horror film! The filmmakers have opted for the PG-13 rating so we do have the severe lack of any bloodshed. Looking at Krampus from another angle though, this rating actually works in favor of the film because it allows it to be the perfect gateway horror film for younger children. It’ll be frightful enough to make them jump but also teach them a few good lessons in the process. It’s a film not just about the evil “shadow of Saint Nicholas” wreaking havoc, it’s a film about tolerance and loving family. It’s a wonderful melting pot of Christmas lore, some wicked creepy practical effects work, great casting, and a juicy infusion of comedy.

Unlike Doughtery’s previous entry in the genre Krampus stays focused on one single story involving the Engel family and their close relatives spending the holidays together. Its a simple story of a family not appreciating each other and being more consumed with themselves. Max Engel, played here by Emjay Anthony, just wants his family Christmas to feel like it once was. With two parents who aren’t getting along, a sister who could not care less, and some wretched relatives coming over causing tension with everyone the Christmas spirit has been snuffed out. Thankfully Max’s family is much more welcome company for us with the wonderful ensemble cast they’ve brought together. Adam Scott (Parks and Recreation) and Toni Collette (United States of Tara) take the roles of Max’s parents Tom and Sarah while her sister, Linda and her husband Howard are played by Allison Tolman (TV’s Fargo) and the always great David Koechner (The Office).

Max’s last hope for a good Christmas comes with writing a letter to Santa Claus but when the letter is found by a pair of mocking cousins Max finally loses hope and make a conscious decision to not believe in Christmas anymore. Suddenly an abrupt blizzard cuts off the town and Christmas gets much more frightful than delightful. Krampus, just like Santa Claus does not work alone so we get plenty of different set pieces leading up to the finale with our title character. This keeps the pace moving and the film exciting throughout as the screen fills ups with gruesome toys brought to life, killer gingerbread men, and other surprises all courtesy of WETA Workshop, always ones to do great work. Combine that with comedy in all the right places, some simple yet superb storytelling, gorgeous cinematography, and some of the best sound editing you’ll hear all year for one fantastic new Christmas tradition.

Krampus looks stellar! Mastered in 2K the image is crisp, popping with color, and will certainly look perfect on any home theater system. Unless you’re a true pixel snob or some sort of alien you won’t have any gripes showing this movie off. A genre film like this doesn’t usually get to look this nice so seeing that Krampus can shine on the screen and actually be a genuinely entertaining piece of cinema is a delightful experience through and through. Cinematographer Jules O’ Loughlin keeps the camera moving and the framing very pleasing to the eye, with so much whimsy and madness going on it’s going to be hard not to be engrossed by the look of this film.

Hooves pounding, bells jingling, blizzard winds blowing, fire crackling, the creative sounds of demon possessed toys and so much more all backed by a fantastical soundtrack blended with classic Christmas carols. I, like Mike Stoklasa of Red Letter Media, want to know why Krampus didn’t get at the very least an Oscar nomination for Sound Design. (There is no Oscar for Sound Design) Krampus sounds extraordinary, if you aren’t interested in the big and loud explosive nonsense of the ever popular comic book film than this is a perfectly acceptable if not BETTER alternative to show off your sound system. The sound is unique, filled with life, yet never overbearing.

Krampus is a very standard Universal release. We get a slipcover with some decent art and the standard keep case to house the Blu-ray and DVD which have some pretty terrible art of one of the films coolest possessed toys, so that’s disappointing that we didn’t get something a little more stylized. 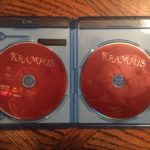 On the special features side of things we are advertised an alternate ending that is a complete waste of time. If you’ve seen the movie, you’ve seen the alternate ending, just subtract the last 30 seconds of the film. It’s almost preposterous. Moving on are a bunch of disappointing deleted scenes that just seem more like re-edits of existing parts of the movie. These features are a total wash. Thankfully the saving grace on the features front is, “Krampus Comes Alive”, a 30 minute featurette on the making of the film. Featuring interviews with the cast, Michael Dougherty, but most importantly an in-depth look at the work WETA Workshop put into bringing the creatures of the film to life. Also included are a gag reel, galleries, and a feature commentary with Michael Dougherty.

The basic packaging and average special features are the only thing preventing this from being a perfect 5/5 release for me. In a perfect world I envision families every year gathering their children and loved ones around a big screen TV on a cold, wicked, whimpering winter night as the fire crackles in the background and the terrifying images Michael Doughert and WETA Workshop have cooked up overtake the screen in front of their eyes. This film deserves to be a yearly watch, it deserves to be discovered year after year by younger generations and it deserves to sit on a shelf right next to the Christmas classics that have defined the holiday for years. This is one of the highest recommendations I will give to any movie. Krampus absolutely demands your attention, may he have mercy on anyone who chooses to ignore him.