Drawing the Knight of Cups card signifies that one is a dreamer, both constantly bored and yet always seeking excitement and change. They are prone to fits of fancy and often accused of being  lost in thought. Like the other three knights in the Tarot Deck, the Knight of Cups is assigned an element: in this case, water. In Terrence Malick’s latest film Knight of Cups, we meet one such dreamer: an aloof man named Rick (Christian Bale) unsure of his place in the world. We float alongside him as he weaves his way throughout Los Angeles, leaning on the shoulders of women representing various premonitions and prophecies. For those familiar with Malick’s oeuvre, there has been great excitement and anticipation in the world of film as his output grows ever more prolific with each passing year. After two seminal films in the 1970’s (Badlands and Days of Heaven, both available from the Criterion Collection), Malick went silent for a full two decades before returning with what may be the finest war film ever made: 1998’s The Thin Red Line. Since that time, we’ve been treated to three more films from this often studied filmmaker in the lead up to this latest release. How well does this Blu-ray release treat Malick’s legendary attention to detail and peerless eye for cinematography? Let’s dive in. 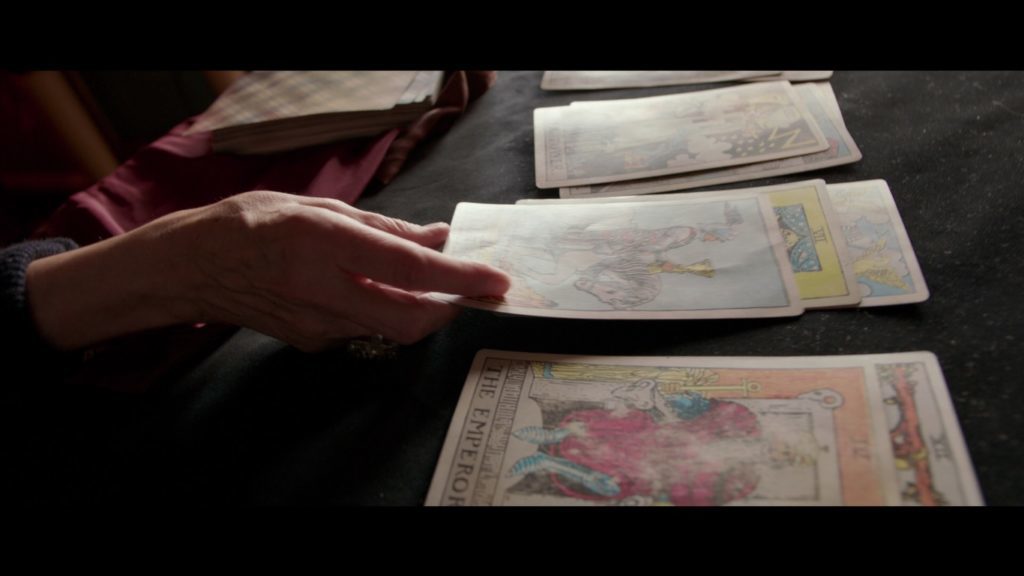 To summarize Knight of Cups in a traditional method is an exercise in folly, so I’ll do my best to paraphrase where it’s needed and avoid complications as best as I can. Equal parts meditation, prayer, and fever dream, Knight of Cups dips in and out of the thoughts and dreams of both protagonist Rick and the many friends, lovers, and family members he encounters along the way. Relying heavily both on The Pilgrim’s Progress by John Bunyan as well as the “Hymn of the Pearl” from the apocryphal Book of Thomas (not to mention the cards of the Tarot which divide the film into thematic sections), the experience of trying to watch Knight of Cups sans an affinity for interpretation and symbology is akin to one attempting to read T.S. Eliot’s The Waste Land in the first grade. Malick and longtime cinematographer Emmanuel Lubezki (who first worked with Malick on the criminally underrated The New World) craft a sensory experience packed with near endless references and hints along with the whispered dialogue and dramatic shifts in picture quality and source. Not since Enter the Void has a film endeavored to succeed in portraying a sensory experience to the extent that Knight of Cups attempts, and largely succeeds. Where Noé’s film was constantly overwhelming, Lubezki’s cinematography creates a swirling yet disembodied sensation for the viewer, forever left off kilter as the scenes swing from shot to shot without concern for the viewer’s overarching coherency. The images come as they would in a dream, and thus Knight of Cups is in many ways just that: a dream. 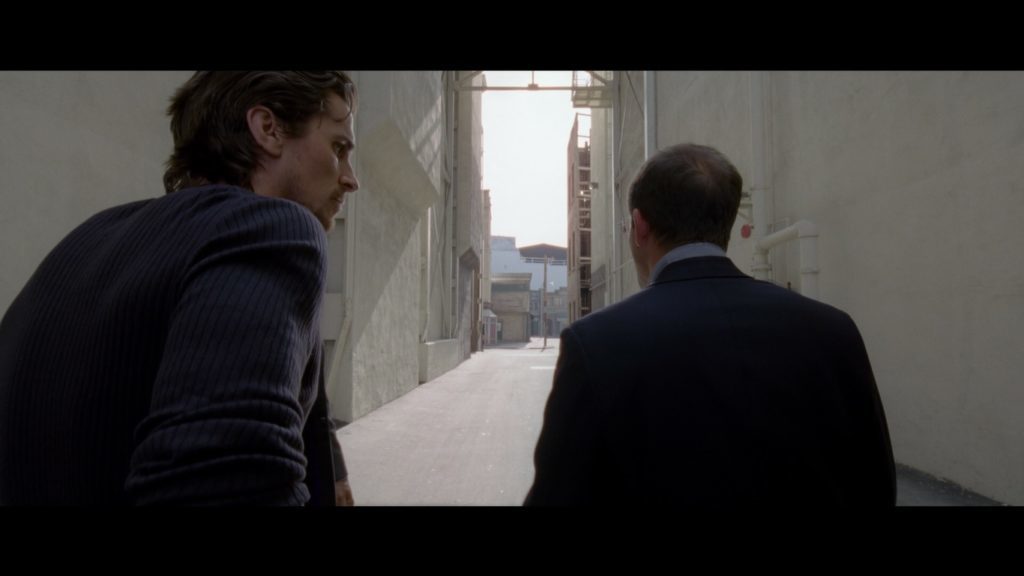 This is a dream in seven parts, however. Divided by six Tarot Cards followed by a final statement (“The Moon”, “The Hanged Man”, “The Hermit”, “Judgment”, “The Tower”, “The High Priestess”, “Death”, and at last, Freedom), we slowly learn about Rick as we move through these divisions, but more than anything else that he is utterly beholden to women. As he tortures himself for previous mistakes and burying himself in an unrewarding profession (nebulously suggested as screenwriter or actor at times). He also, at times, finds himself moving through difficult scenes of recollection and rage with his surviving brother (they collectively lament the other’s passing, either by suicide or unsolved murder) and father, as well as a brief time with his mother. Yet, the true shepherds of Rick’s dream quest are the women who taunt him, hold him, tease him, guide him, and even love him. Of particular strength is the “Judgment” segment, where Rick and his physician ex-wife (played by Cate Blanchett) dovetail in and out of scenes of tenderness and regret punctuated by scenes of Blanchett at work bringing tenderness to horrifically injured patients. 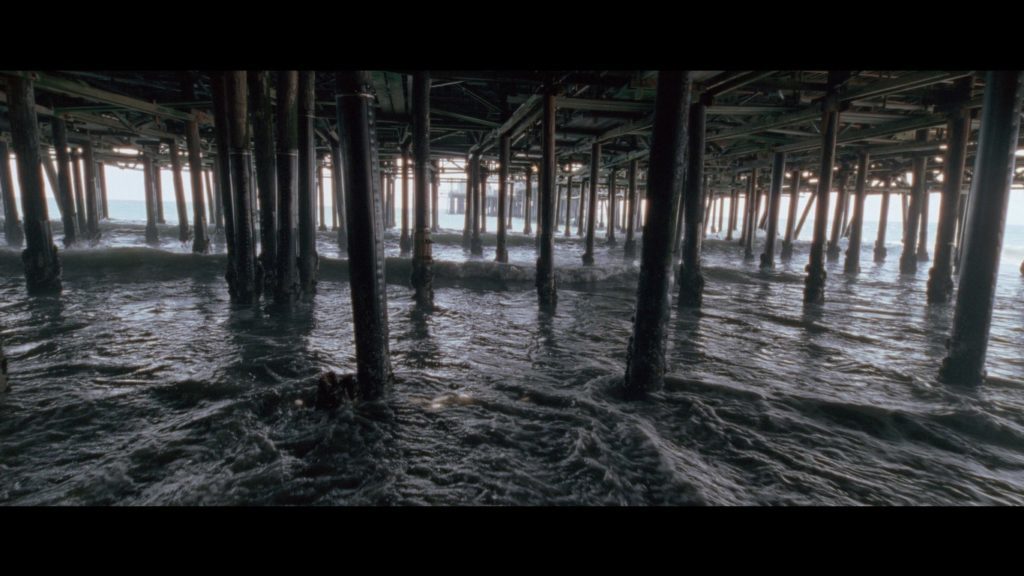 Few films can boast five different sources for their shots, but Terrence Malick is no ordinary filmmaker. Using two different 35mm Arri cameras as well as a 65mm Panavision, Red Epic, and even a GoPro HD, Emmanuel Lubezki’s superb cinematography manages to look absolutely stunning on this release. The shifts in the film’s visuals will be easy to spot for most dedicated film fans, and the transitions to and from the GoPro are impossible to miss, but I cannot fault a film’s visual presentation based on the chosen source material by the filmmaker and crew. The majority of the film is clearly shot on a mixture of 35mm and the Red Epic, and many of the outdoor scenes feature a slight grain, giving a subtle warmness that compliments many of the scenes where it is present. The scenes with grain do jar the viewer when compared to the rest of the film, but as an intended part of the presentation, this release of Knight of Cups is truly beautiful. 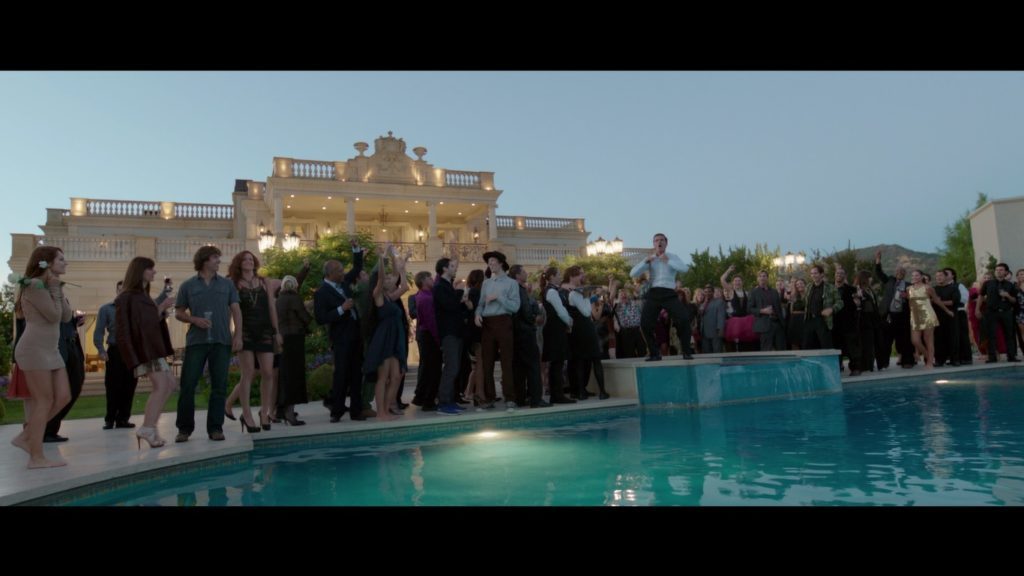 Rarely has a film worked so well in tandem with its score and sound work. Knight of Cups comes to us with a DTS-HD 5.1 mix that wraps the viewer in a rich tapestry that perfectly compliments the dream quest that we accompany Christian Bale’s Rick on. Whispers dance in and out of the mix, working with the score to rather dramatically sweep up the viewer into the dreamy take on Los Angeles that dominates much of the film. While more distinct conversations occupy a center space, the mix takes full advantage of the opportunities it has to surround the viewer. With a largely understated score, Knight of Cups isn’t going to give the wow factor that modern action movies can deliver to a surround sound system, but it’s this very restraint that defines the mix and works beautifully with the film itself. 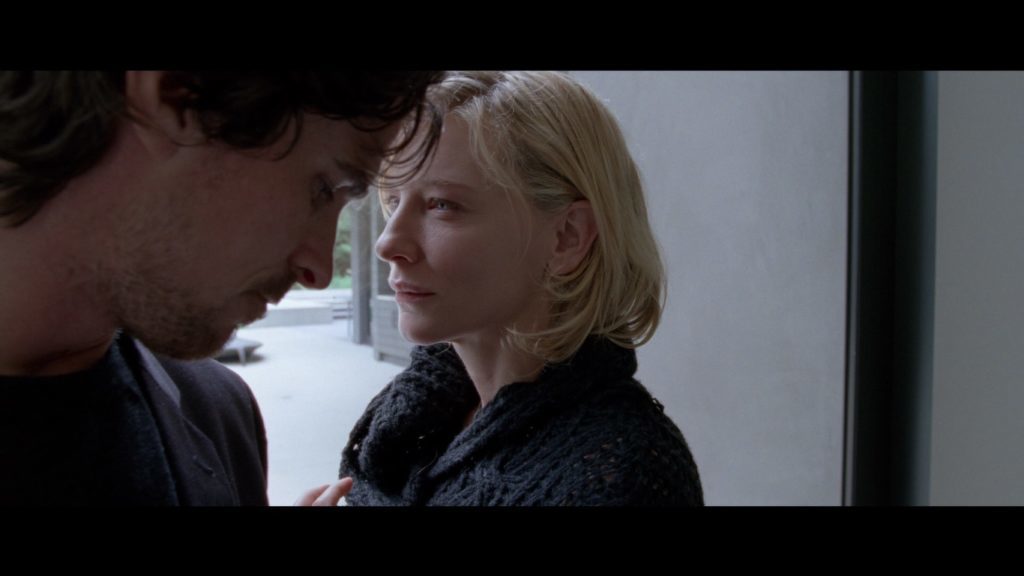 Knight of Cups arrives in a simple Blu-ray case. Cover art is consistent with the other promotional materials previously released for the film and inside is a basic disc, colored blue with the film’s title on it. No digital copy of any kind is included, nor is there any insert. with all of this in mind, it’s clear that Knight of Cups was not a priority release. Despite Terrence Malick’s pedigree, his films since The Tree of Life have catered almost exclusively to the arthouse crowd, and this release follows the same pattern as his previous film, To The Wonder, by coming to us with a barebones presentation. 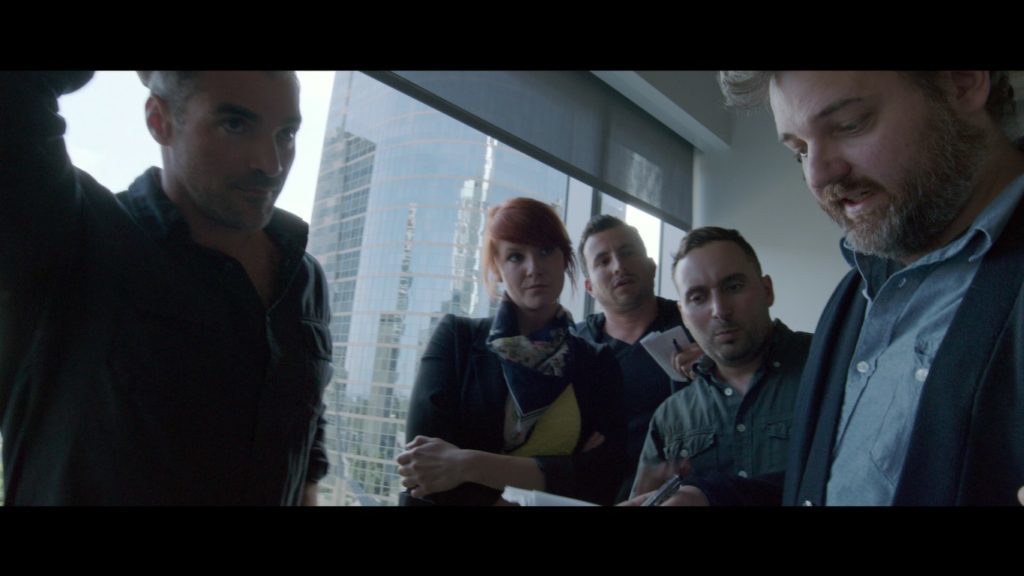 The disc includes one special feature, a 16 minute “Making Of” featurette shot in HD that is well worth a viewing once you’ve completed the film. The notoriously camera shy and press avoidant Malick may not be featured, but we see interviews and discussions with the horde of actors featured in this film, each giving insight (and barely containing their excitement) on working with a legendary director of Malick’s pedigree. Of particular note are discussions of Malick’s approach to direction, his use of “torpedoing” his actors in a given scene (where he introduces another character absent from the script), and even his shocking refusal to give Christian Bale a working script for the majority of the film. Malick fans will enjoy the inside look, however brief it is. 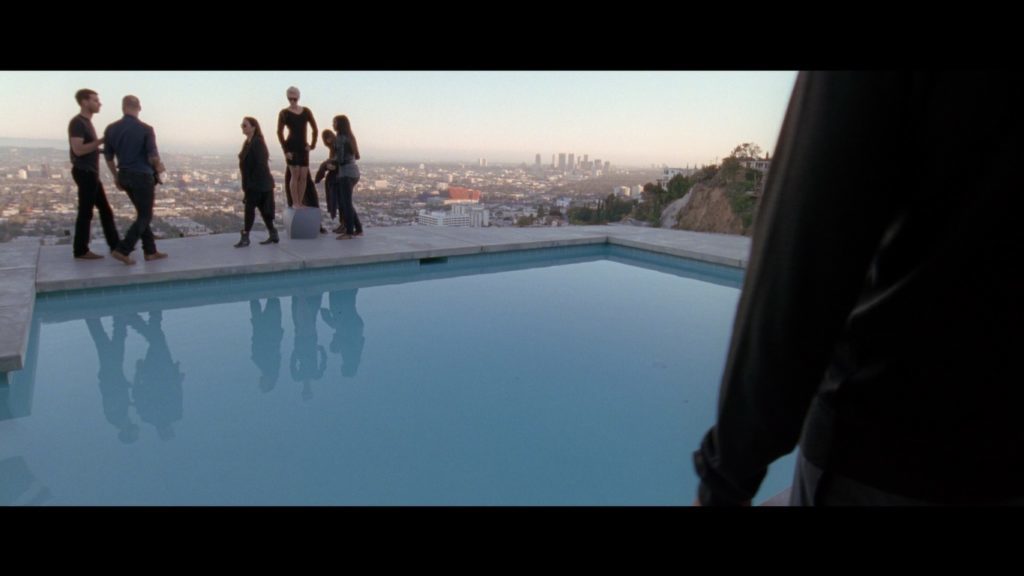 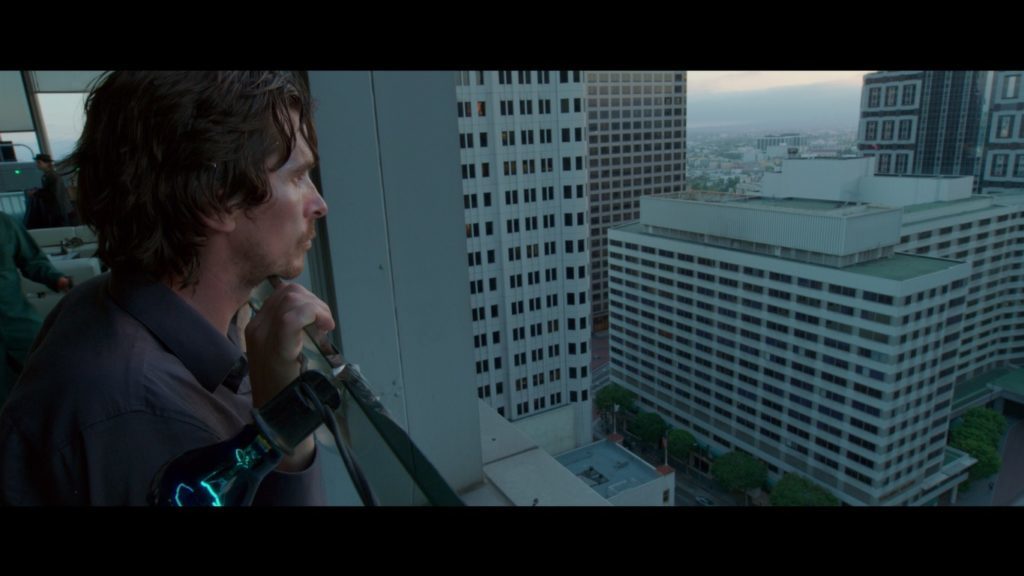 Malick’s most experimental film yet, Knight of Cups arrives on home video with a stunning visual and audio presentation that invites the viewer to fully immerse themselves in Rick’s pilgrimage through a hedonistic vision of Los Angeles. Fans of Malick’s previous films will be challenged by the director like never before as Knight of Cups offers no easy answers, even on repeat viewings, but the wealth of beauty on display here is a treasure trove for fans of cinema from all walks of life. This release follows To The Wonder to the market with a bare bones presentation, but judging by the continued patronage of his films by the Criterion Collection, I would expect to see this film to one day receive the coveted Criterion treatment, although I suspect many years will pass before that could transpire. If you’re not a fan of Malick’s or are unfamiliar with his work, you may want to avoid this release, but devotees of both the director and of great cinema will be pleasantly surprised by the quality of this presentation despite its rather lackluster release. The film itself is worth the price of admission, whether we’re looking for answers in our own lives or to simply see what one of our greatest directors dreamt of when he decided he wanted to pray on film.