Since getting into the habit of critically reviewing the films that I watch more, I knew that I was going to run into the occasional film where I ask myself “What in the hell am I thinking by watching this?”  Sure, I will always give a film its fair chance, but never did I experience a film like this where I wish I was never given the chance to screen the film.  Journey To The Shore from Masters Of Cinema certainly left me questioning my hobbies and lifestyle choices.

Journey To The Shore is a 2015 romantic drama that was directed by Kiyoshi Kurosawa.  Originally selected to be viewed at the Contemporary World Cinema section at the 2015 Toronto International Film Festival, this film resulted in Kurosawa taking home the prize for Best Director.  Spanning 128 minutes that I will never get back, Journey To The Shore is a horribly lethargic experience to say the least.

I ended up giving Journey To The Shore a 2 because it did include a sense of adventure, but that is me being generous with this film.  David Rooney from The Hollywood Reporter was quoted saying that there were “too much lethargic, unclear plotting and saccharine melodrama mean the gentle film is as intriguing as its premise, even if Kurosawa as always provides arresting visual moments and has a commanding way of building atmosphere out of stillness.”  After reading that quote, I couldn’t agree more.  While there were parts that were visually appealing and fun to watch, the overall experience that I had with this movie is one that I will not be repeating at all.  This film will be sitting on my shelf in the little sleeve that it was delivered in and will likely remain untouched.

I mean, we do experience the expected sadness and grief during the traumatic event that Mizuki experiences in this film.  But when she finds out what she had thought happened didn’t, she isn’t the slightest bit surprised.  Hell, if I were ever to be subject to an experience even remotely close to what she went through only to find out that it really didn’t happen, I can almost guarantee that I would be in shock.  I can’t really go more into detail of what happened without publishing any kind of spoilers from the story; so if you’re questioning what actually happened, give this film a shot when you can.

Given that this film was released in a dual format combo pack, we received a DVD Screening copy which made for a less than pleasant experience.  If you are releasing a film and want someone to give an honest review of your product, at least give them the a copy of what you’re trying to sell.  You want to promote your product don’t you?  This film is my second experience with the Masters Of Cinema Series and I’m slowly losing interest in their offerings.  While I will surely give everything that they release that comes in my direction a fair chance, I’m personally not going to be pursuing any releases like this in the near future.

I’m not going to go into too much detail on the audio quality of this release as the studio really didn’t give us the opportunity to reveal the product that they had released.  By sending us a DVD Screening copy, I can’t give a fair opinion on the audio presentation that I experienced as I watched this film last night.  The audio of it was clear, despite only being 2-channel.  There were moments where I did have to adjust the volume on my home theater to make sure that I was hearing things correctly when it came to the ambient sounds.  Journey To The Shore is completely in Japanese, so I wasn’t too concerned with the audible dialogue as I was reading the film as I watched it.

I refused to rate the packaging of this release as the copy that we had received was a DVD Screening copy.  Basically a pre-production copy that was packaged into a clear jewel case.  I know other members of the /r/dvdcollection subreddit continue to show a liking to the Masters Of Cinema releases, especially our European members.  But considering what we were given for this review, it doesn’t feel right rating the packaging we didn’t receive.  However, after looking over the cover art that was made available through Eureka’s website: 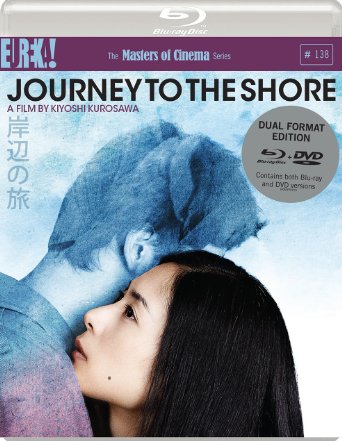 I will admit that the cover art really does capture the general story that this film set out to present.  IMDB does a decent job of generalizing the synopsis of this film, so if you want to see what this film is about, feel free to check it out.

I didn’t rate the special features for this release as the copy that we had received was a pre-production DVD Screener and it included no special features whatsoever.  As I continue to discuss the Masters Of Cinema Series with the members of /r/dvdcollection on occasion, I understand the retail releases often do include some special features.  However to rate something that I wasn’t given the opportunity to review, it just doesn’t make sense.

Personally speaking, I was really unhappy with the experience that I had with this film.  While I do appreciate the opportunity to give this movie its fair chance, our goal is to provide an honest at home theatrical experience review for releases.  Your average consumer isn’t going to be purchasing pre-production screening copies to maximize their experience in any way.  A quick note to the firm that sent us this film, if you would like us to do a solid review of any capacity, at least send us the retail disc so we can properly convey to our readers of what to expect when they purchase your releases.  Otherwise, you’re really just wasting your time by sending us the preproduction screeners.

As you can see, I really didn’t care for the story that this film presented, however if you would like me to write an updated review so we can publish real expectations to our readers; use the “Contact Us” page on this site to reach out to me.  I will be more than happy to give this film a second opportunity given that it is in fact a retail release.

If you would like to learn more about this films release, check out Eureka Video’s page.