Each title in the set merits its own review, beginning of course, with the one that started it all, John Carpenter’s Halloween.

The story itself is straightforward; On October 31st, 1963, six year-old Michael Myers dons a clown mask and murders his sister.  Catatonic, the young Myers is institutionalized under the care of psychiatric doctor Sam Loomis (played by Donald Pleasence in arguably his most iconic role) , who quickly comes to the realization that the boy is pure evil in a humanoid form.  For the next fifteen years, Loomis manages to keep Myers locked in Smith’s Grove Sanitarium.  October 30th, 1978, the now 21 year old Michael Myers manages to escape the minimum security facility and head back home…to the quiet town of Haddonfield, Illinois.

The following day, Halloween, young Laurie Strode (Jamie Lee Curtis in her first starring role) begins to go about her typical high school day, catching small glimpses from time to time of someone following her.  Her friends don’t take her seriously, and Laurie herself isn’t exactly alarmed as she continues to go about her day.

Loomis, on the other hand, knows exactly the kind of terror that will soon tear Haddonfield apart, and knows it’s up to him to try and stop it.

Often imitated, never duplicated, for better or worse this film gave birth to the modern slasher film.  John Carpenter’s Halloween is a slow burn compared to other horror franchises that opt to throw the horror in your face from the start, but it’s a very good thing here.  The day to day life of Laurie is on display, and the viewer can really appreciate that Haddonfield is a quiet place where people don’t lock their doors.

The tension builds with long, lingering takes of Myers watching his prey and stalking them.  I once read a comparison of Myers to the shark in Jaws, both forces of nature that can’t be stopped, and that’s probably the best way to describe the unnatural feeling the character of Michael Myers gives off in this film.

Donald Pleasence’s Sam Loomis almost comes off as the tragic hero of the film, giving off the vibe that he’s given up everything to keep Michael Myers at bay, and still managed to fail.  He brings and oddly paternal sense of obligation to the role, and manages to keep the character grounded in reality.

Does anything need to be said of Jamie Lee Curtis, Queen of the Scream Queens?  Of course, but I wouldn’t be saying anything we didn’t already know.  Often this film is criticized for starting the trope of the virginal final girl, but I would have to disagree with that.  Laurie is just as interested in boys as her two pals, she just doesn’t talk as openly about them, and she even partakes in smoking a joint with her friend Annie in one scene.  She offers some characteristics, sure, but ultimately, she’s a very early prototype.

In the Limited Deluxe Edition box set John Carpenter’s Halloween is offered on two Blu-rays, one boasting the 2013 35th Anniversary restoration and the second using the 2007 Blu-ray transfer.  For review purposes, this rating only applies toward Disc 1, because Disc 2 is exclusive to the Limited Deluxe Addition as a special feature and will be treated as such. 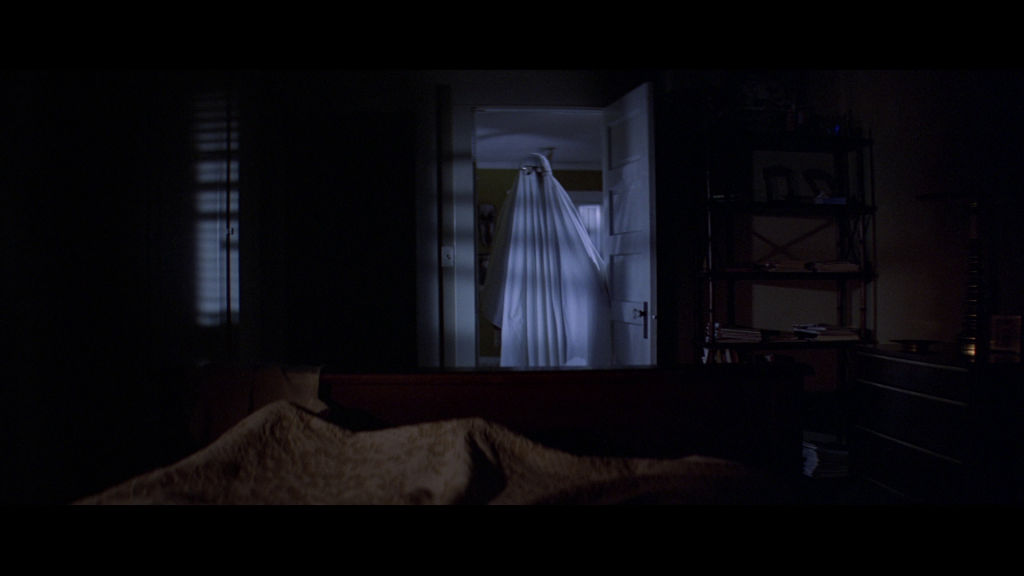 After owning this film on several formats throughout the years and suffering through various qualities of image, I can honestly say this one is the best yet.  This version isn’t as bright and the colors have been toned down in comparison to some previous offerings, and it really makes the image feel like it’s a cool fall day even when the sun is shining.  The blacks and shadows for the night time scenes are still solid and detailed, with no evidence of them blurring together or into bits of the background.  No compression artifacts were apparent, and the transfer is very clean with no visible grain.  This transfer was overseen by the original Director of Photography, Dean Cundey, so this should be about as close to a pristine theatrical print as you can get short of owning a time machine.

Offering up a new Dolby True HD 7.1 sound track, this version of the film sounds incredible.  The music and dialogue are mixed well together and don’t overpower one another, and it really brings a really well done sonic element to compliment the improved visual experience.  Also on this disc is the Original Mono track.  If I didn’t have a decent audio setup I might have given this a more serious consideration, however as it stands the 7.1 is superior and the mono track appears to be here just for the sake of completeness.

Heavy on the special features front, Disc 1 offers up a previously released commentary with John Carpenter and Jamie Lee Curtis.  They’re both engaging to listen to and offer some both familiar anecdotes about the making of the film and a few gems you might not know.  Jamie Lee is very impressed with Carpenter’s shooting style of long cuts throughout the track.  It’s an enjoyable listen.

We’ve also got a new commentary track from DP Dean Cundey, Tommy Lee Wallace, and Nick Castle.  All three were recorded together, and they offer some fresh insight on the production.  It was both informative and entertaining, and different enough from the previous Carpenter tracks to warrant a listen without worrying about information overlap.

The Night She Came Home featurette is an hour long convention documentary chronicling Jamie Lee’s first and only (to my knowledge) convention appearance for charity in 2012.  It presents Jamie as a woman who exudes pure class, and seeing her interactions with old cast mates is heartwarming.  The fans are incredibly appreciative of the opportunity to meet her, and she doesn’t disappoint.  In all honesty, I’m a bit biased regarding this featurette, however, since I’ve spent a significant amount of time traveling the convention circuit and recognizing quite a few of the people in the crowd as convention regulars.  It was almost like seeing a really strange home movie and oozed nostalgia for me.  Most folks will probably watch it once and be done with it.

Moving forward, we’ve got the previously released On Location: 25 Years Later featurette clocking in at a little over ten minutes.  It’s a neat little piece about the house used in the shooting of the film, and how it’s become a tourist attraction.

We’ve also got ten minutes of footage that was shot for the television version to pad out the run time for network broadcast.  It adds more depth to Loomis’ character, but the scene in Laurie’s house where Lynda wants to borrow a sweater and they discuss the man following them in the station wagon felt unnaturally long in the scene itself.  I can imagine it would grind the already slow paced film to a screeching halt.  That being said, I know some folks prefer the TV version and Blu-ray being what it is, I’m surprised the option to watch a version including the TV footage wasn’t including via branching.

Wrapping up Disc 1 we’ve got your standard trailers, TV, and radio spots.

As previously mentioned, the 2007 disc of John Carpenter’s Halloween is included with the Limited Deluxe Edition, and if you prefer your version of the movie a little warmer and brighter, this is the version for you.  I’ve heard in the past this release being criticized for poor color timing and overall being a bad transfer, but I noticed none of this.  It’s still a solid transfer in its own right.

This disc offers a commentary track with John Carpenter, Jamie Lee Curtis, and Debra Hill.  All were recorded separately, but the track still manages to be informative.  The track flows well, and is a prime example of how good a track can be even if it’s a cut and paste job.

Halloween: A Cut Above The Rest is a feature length documentary covering the production and legacy of Halloween.  It’s got quite a few interviews, but if you’ve managed to make it through the commentaries and other featurettes on this set you’re going to get some information overlap.

There’s a pop up trivia track with you shouldn’t bother with, but it was on the 2007 Blu-ray so instead of re-authoring the disc they just kept it.

And finally we’ve got your same trailers, TV, and radio spots from the previous disc. 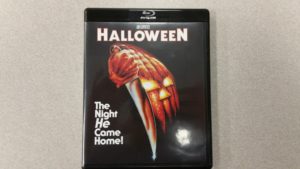 This is the benchmark release for John Carpenter’s Halloween by far.  With two versions of the film and an almost exhaustive set of extras on the first film alone, the Limited Deluxe Edition is already off to a great start.  Additionally, for anyone not wanting to shell out almost $100 for the Limited Deluxe Edition can opt for the cheaper Halloween: The Complete Collection, which trims the total number of discs from 15 to 10 and omits the second disc of the original film.