In a bold move, Oliver Stone has stepped away from the children and family films he’s known for and decided to finally tackle a controversial subject matter in the epic conspiracy thriller, JFK.  Of course, I’m being facetious with the previous sentence, since Stone is no stranger to controversy, however the film manages to push buttons and be thought provoking at the same time.

The running joke with movies like JFK or Titanic is that since they’re well known points in history, everyone already knows how they end.  Kennedy dies and the boat sinks.  And while that’s true for the latter, JFK actually starts with the murder of the 35th president of the United States and manages to paint a decent picture of the political climate of the time and detail some of the aftermath of a nation in mourning.

Our story follows New Orleans district attorney Jim Garrison, war veteran, patriot, and ultimate martyr who never falters in his dedication and quest for the truth, even when it threatens to tear apart his marriage, career, and possibly end his life.  Garrison’s journey to unravel the Gordian Knot of “Who killed JFK?” takes him all over the county and only get more complex as the story continues.

Sadly, though, it seems just about everyone had a reason to want Kennedy dead, from the mafia, Cuban extremists, the CIA, possibly the United States military, all the way up to the upper echelons of the White House.  Garrison, forever the stalwart hero of this particular tale, never falters, as he continues to walk further into the shadows even as his DA office is bugged and his credibility attacked.  The film makes a point to keep repeatedly reminding us that the truth has a price, and only a brave few are willing to pay it. 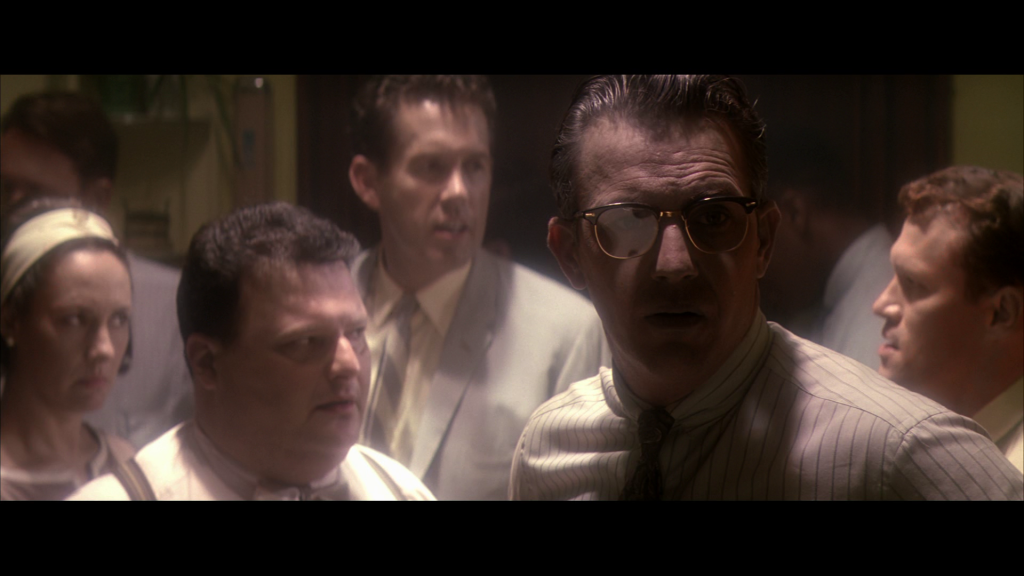 JFK is the kind of film that could easily collapse under its own weight, boasting a large ensemble cast and expecting the viewers to keep up with who’s who and what relation they are to the main narrative.  The film is almost hyperactive, building a kinetic energy and weaving a narrative that continues to get built upon like a house of cards and doesn’t seem to relent for the entire three hour and twenty six minute run time.  It manages the hefty duration well, with enough revelations and plot twists to keep the viewer’s interest. 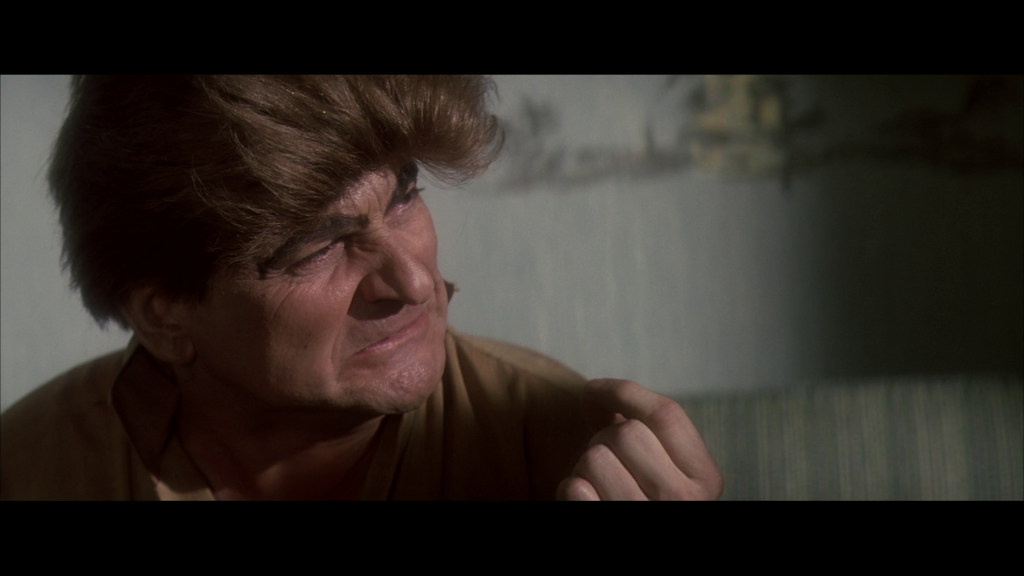 Ultimately one must look at this film as a piece of entertainment and not as a representation of true events, even though JFK is firmly rooted in a major historical event.  There’s no question that JFK is pushing the “Question Authority” agenda, and even plays fast and loose with the history from time to time, but as a film it works on several different levels, and incredibly so.

JFK is a film full of flashbacks, news footage, and television snippets.  Different film stocks and sizes were used throughout, giving the finished product an aged patina that looks remarkable on Blu-ray.  The dirt and grit that manages to stay in the film is obviously intentional, and manages to evoke several different styles of filmmaking, ranging from documentary to exploitation to film noir.

Visually, the movie has a lot to offer even though it is mostly a talking heads movie…but it’s shot in such a way that the subtleties of each actor’s performance can really enhance a scene.  The Blu-ray really enhances the claustrophobic atmosphere of the film, and the camera tightens and zooms during several scenes of rapid-fire exposition until you’re able to count the beads of sweat on Joe Pesci’s brow or almost taste the freshly blown cigarette smoke from John Candy’s lips.  With extensive wide shots and extreme close ups, none of the frames are wasted, and the level of detail the 1080p Blu-ray offers can’t be beat. 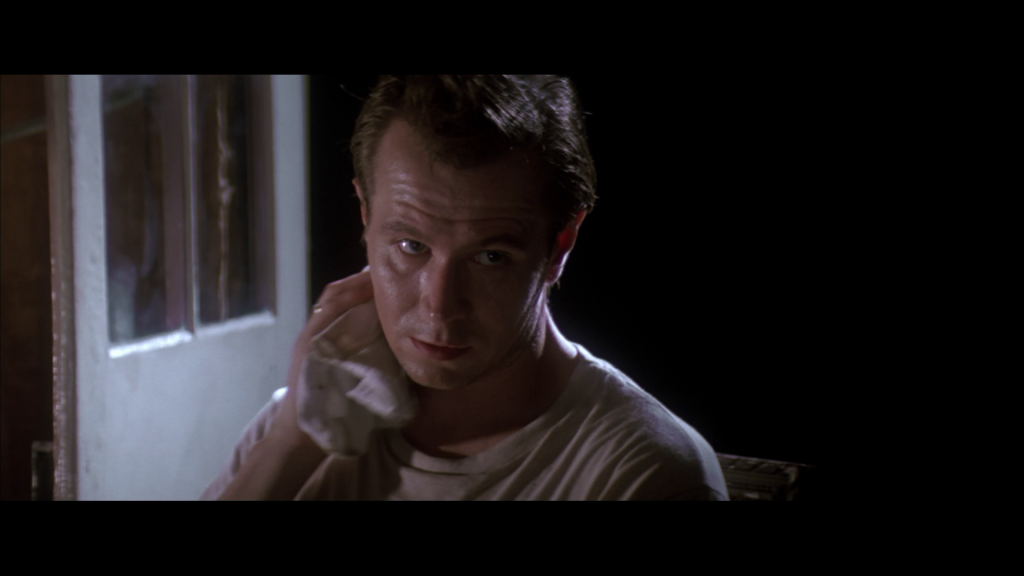 JFK sports a Dolby TrueHD 5.1 and Dolby Digital 5.1 audio track.  While serviceable, I did have to keep the remote handy to bump the volume of my soundbar up a few notches during some dialogue scenes and back down when the score got a little overwhelming.  John Williams does deserve a nod for his great score here though…invoking a thoughtful, what could have been, nay should have been tone whilst keeping a military feel.  It’s not going to go down as one of his most memorable scores, but it’s a perfect fit for this film.

The Blu-ray boasts an okay set of special features…none of which are presented in HD, and some are omitted from the 2 disc special edition director’s cut DVD, but you’d never miss them if you didn’t know they were there.  Sadly, I do know they were there, and hence losing a few points on the score.  Focusing on what we do have though is a really good commentary track with director Oliver Stone.  It’s just him for the three hour plus marathon, but he’s very engaging and easy to listen to.

There’s a pretty healthy selection of deleted scenes on the disc, as well.  For a movie that’s pretty balls deep in what some could argue is Banana Land, some of these deleted scenes go right past the city limits and set up shop in Batcrap Crazyville.  I can understand why the scene with Jack Ruby getting injected with cancer or the wistful monologues by Lee Harvey Oswald breaking the fourth wall weren’t kept in the film.  But they’re here for the sake of posterity, and all have optional commentary by director Stone to explain why or add some historical depth.

Also on deck we’ve got a 90 minute TV documentary called Beyond JFK: the Question of Conspiracy.  It’s pretty good, but covers a lot of ground the film already does.  Cast and crew interviews are sprinkled throughout, but it never feels like a press kit series of interviews.

Next we’ve got the thirty minute Assassination Update: the New Documents which sounds really interesting on paper, but watching it I realized I’d much rather be watching paint dry instead.

If you really want to split hairs, the digibook release has cast profiles and a few essays. 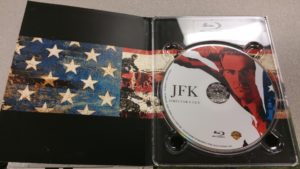 It’s a Digibook.  What you see is what you get.

Alternatively, you can opt for the Ultimate Collector’s Edition. 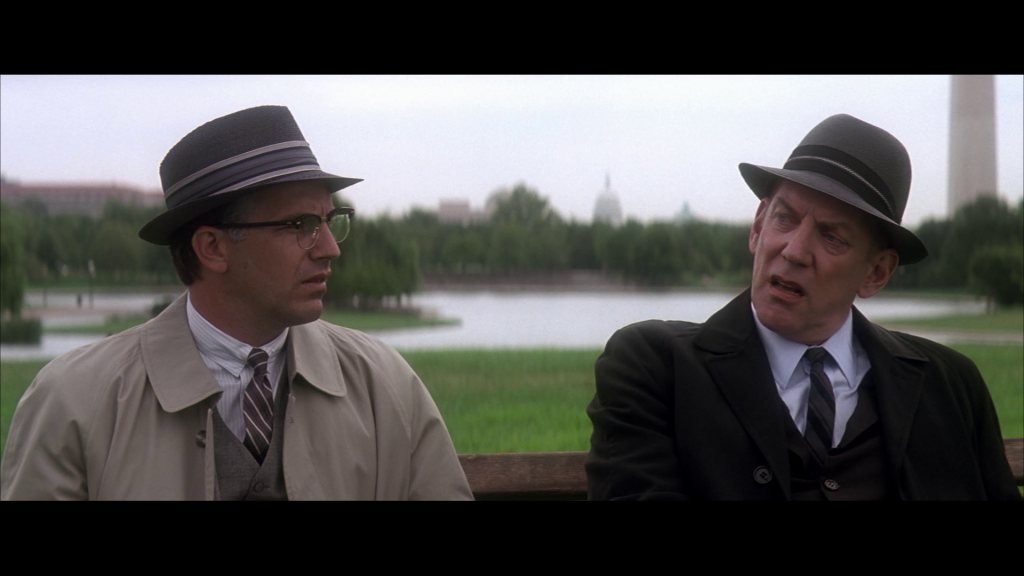 I go back to this film at least once a year.  I feel JFK stands up against repeat viewings and still manages to retain the emotional impact.  The presentation on Blu-ray, while hearty, leaves some room for improvement.  Maybe a cast commentary, or at least interviews with the key players to see how they look back on the film many years after the fact?  Regardless, it’s still a strong package and worthy of owning.