Jeff Rauseo, the Head Editor and Co-Founder of the ReDVDit Review site, presents his list of favorite Criterion Collection Blu-rays, as follows.

As a fan of massive monster movies like Cloverfield, Monsters, or Pacific Rim, to understand the origins of the genre you have to go back to the most famous monster movie of all-time, the original 1954 Japanese classic Godzilla (Gojira in Japan). The stop-motion monster created by Ishiro Honda has become an iconic pop culture icon, spawning a franchise that produced 30 feature films and counting. Interestingly enough, the Godzilla creature actually has its roots in historical events. The original thought on the monster was that it served as a metaphor for the nuclear bombs dropped on Nagasaki and Hiroshima at the conclusion of WWII. The atomic breath, destruction, and fear that Godzilla instills in people was so symbolic for the Japanese people. This image has evolved over the years, but it is a surprisingly important character in Japanese cinema, and was one way that the country dealt with the horrors of war. 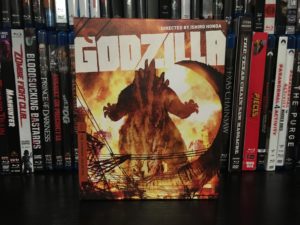 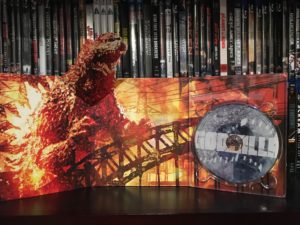 The Criterion Collection Blu-ray release of Godzilla features a new high definition restoration, a restored, uncompressed mono soundtrack that adheres to the Director’s original vision, and newly translated English subtitles. This release also features a new restoration of the 1956 American adaptation of the film, Godzilla: King of Monsters, as well as tons of featurettes, interviews, commentary tracks, and a nice booklet. The Criterion Godzilla also features some of the most unique packaging in my collection, with a digipack that holds a pop-up Godzilla that rises out of the case when unfolded.

Just recently I reviewed Richard Linklater’s newest film, Everybody Wants Some!!, which some critics hailed as the sequel to 1993’s Dazed and Confused. His newest film was excellent, but Linklater’s Dazed and Confused will always be remembered as the best representation of 1970s teenage culture. The film follows a group of high-school students on the last day of school in 1976, and features stars such as Ben Affleck, Matthew McConaughey, and Milla Jovovich, all before they were even close to being household names. Dazed and Confused features some of film’s most iconic lines and characters, and although it is often imitated, nothing can ever duplicate the feel-good vibes from this cinematic masterpiece. 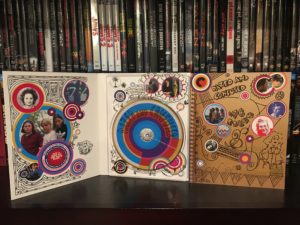 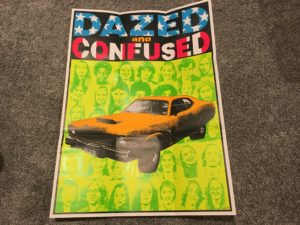 The Criterion Collection Blu-ray release of Dazed and Confused is superior to the cheaper version available from Universal. The Criterion release features a new HD transfer of the director’s cut, supervised by Linklater and his cinematographer Lee Daniel. This Blu-ray also features a DTS-HD Master Audio 5.1 track, a commentary track from Linklater, featurettes and short documentaries, and one of the most interesting pieces on any movie: the original cast auditions. The packaging is also great, with great artwork on the digipack, with a foldout case holding the Blu-ray disc and an essay-stacked booklet. Also included is a fantastic fold-out poster which features the artwork from the original movie premiere announcement poster back in 1993.

David Fincher is the greatest director of the past 20 years. That is my opinion, and I am sticking to it. The Game is probably his least recognizable film, but in a filmography that includes Se7en, Gone Girl, The Social Network, and The Curious Case of Benjamin Button, that is not to say that The Game is a below-average performance from Fincher. In fact, I consider The Game to be one of my favorite movies, and my favorite Fincher movie besides Zodiac. The premise of the movie is simple. Michael Douglas and Sean Penn play brothers Nicholas and Conrad Van Orton; Douglas is a big-shot corporate workaholic, and Penn is his slightly mysterious younger brother. On Nicholas’ 48th birthday, the same birthday that he witnessed his father commit suicide as a child, Conrad presents him with an invitation to play a “game”. From there, we embark on the wild ride that is The Game, with more twists and turns than a scenic highway. It is scary at times, mysterious, dramatic, and even a bit funny, and it is one of those hidden gems from great directors that can often go overlooked. 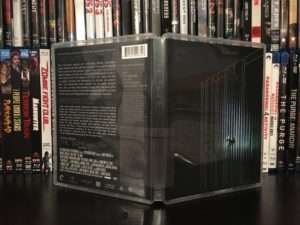 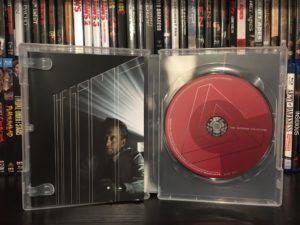 The Criterion Collection Blu-ray release of The Game comes with a new digital transfer that was supervised by the Director of Photography, but the included audio is the real treat. There is a DTS-HD Master Audio 5,1 track which is sourced from the original theatrical audio, but there is also a DTS-HD 5.1 track that was supervised by the film’s sound designer and is optimized for home theater viewing. As always, Criterion has gone out of their way to ensure the best possible at-home viewing experience. Also included is a commentary track with Fincher, Douglas, and various other cast members, as well as an hour of behind the scenes footage and an alternate ending. The packaging for this release is not a digipack, but instead is a one-disc clear and sturdy case, with an included booklet of essays.

Fans of Making a Murderer, The Jinx, or the Serial podcast should take note to this entry. With the recent “true-crime” craze that has swept the nation, it is time to re-visit a classic documentary from legendary filmmaker Errol Morris: The Thin Blue Line. This documentary follows the story of Randall Dale Adams, a hitchhiker who was arrested and found guilty for the murder of a Dallas police officer in 1978. Morris took up filming after hearing about Adams’ story, and weaves his tale of Adams’ innocence through interviews, an excellent score from Philip Glass, and an entertaining but haunting look at the American criminal justice system. If you are enjoying this recent wave of entertainment, where filmmakers and storytellers examine old cases to hopefully overturn old convictions, then you should absolutely give The Thin Blue Line a watch. 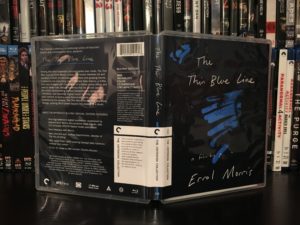 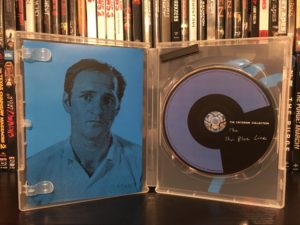 The Criterion Collection Blu-ray release of The Thin Blue Line is a bit thin (heh) on features, but we are treated to a new HD restoration of the film supervised by Morris and Producer Mark Lipson, as well as new interviews with Morris and The Act of Killing/The Look of Silence Director Joshua Oppenheimer. There is also a short feature covering the follow-up to the documentary, with original news footage from 1989. The packaging is a Criterion-standard clear, one-disc case, complete with a booklet featuring essays from film scholar Charles Musser.

The Great Dictator is a Charlie Chaplin comedy feature produced in 1940, right at the start of WWII. This is the most historically significant release in all of the Criterion Collection, for a few reasons. First, although Criterion has done an excellent job on many of Chaplin’s best works, The Great Dictator is his first “talkie”, where all previous films on his resume having been silent features. In terms of cinema, this is an extremely significant moment. Secondly, speaking from a World History perspective, this film is relevant for Chaplin’s portrayal and parody of Adolf Hitler. At a time when the US had yet to enter the Second World War, and Hitler’s ultimate evil was not common knowledge, this was as controversial a film as anyone had ever made. Chaplin plays the evil dictator in his traditional slapstick fashion while not explicitly naming, but clearly representing his thoughts on the newly-appointed German leader. At the end of the film, Chaplin delivers a stunning monologue which not only lays out his personal beliefs, but has also become one of the most memorable moments in movie history. The Great Dictator should be required viewing for every student of History, and is one of the most important films ever made; a great early example of how the medium could be used for more than just entertainment. 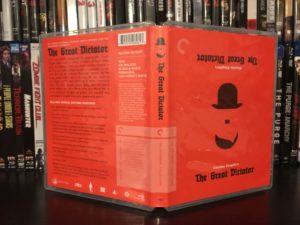 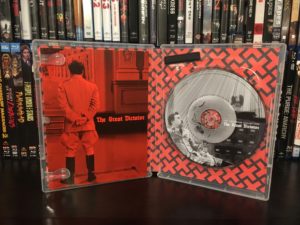 The Criterion Collection Blu-ray release of The Great Dictator is a treat, presenting viewers with a newly restored HD transfer of the film in its original black and white and 1.33:1 aspect ratio. There is also an uncompressed mono soundtrack, consistent with the original film’s elements. As for special features, there is a commentary track from Chaplin experts Dan Kamin and Hooman Mehran, an hour-long documentary titled The Tramp and the Dictator, and lots of color production footage from Chaplin’s half-brother Sydney, as well as some other short features. For packaging, we get the standard Criterion clear case, with one Blu-ray disc and a booklet featuring essays on the film, a defense of the film, and other interesting reprints surrounding the film’s controversial release.