Jeepers Creepers 3 is a 2017 American horror film that was written and directed by Victor Salva and is the third installment of the Jeepers Creepers franchise, taking place in between the first and second film. Jonathan Breck reprises his role as the Creeper. Gina Philips returns in a cameo as her character Trish Jenner, and is her first time returning to the franchise since the original film.

The film opens with a shruiken flying through the air and hitting a wooden post, as a man is running for his life. When the man reaches the road, the Creeper suddenly drops from the sky and flies off with him while another man watches everything from his truck. When he decides to get out and investigate, he looks up into the air and sees a severed hand fall from the sky.

The film was originally shown in theaters on September 26, 2017, in what was originally announced as a one-night-only showing, and then was then shown again on October 4, 2017. During its limited two-day run, Jeepers Creepers 3 ended up grossing $2.3 million in the United States. It opened in 635 theaters for one day and debuted at number three in the Tuesday Box Office ranking, alongside Kingsman: The Golden Circle and It.

Jeepers Creepers 3 is a film that really makes you sit down and ask the question, “Really?”.  There really was absolutely no point in this film being made other than it being an attempt at grabbing money as it tries to grab ahold of the success of the first two films.  There is also a lot of added hate for this film because of Victor Salva’s past, but I am a believer of the fact that he did serve his time; and really hope that he doesn’t fuck up again.  There are two different cuts of Jeepers Creepers 3, the first being the one that aired on the SyFy channel and this one being the theatrical cut.  There were a decent amount of differences between the two cuts, and I felt that the Theatrical cut that’s been made available on Blu-ray offered a much better experience.  Overall, the story was considerably bland and predictable, but definitely made for a decent care-free watch.

The overall picture presentation of Jeepers Creepers 3 was beautifully done and offered a nice, clean and bright picturesque look into the town that the Creeper is wreaking havoc upon.  One thing that really stood out on this release was the extreme amount of detail that was put into the makeup of Breck’s character, the Creeper.  As he obviously gets more face time in this film than he has in previous films, especially in sequences that involve daylight.

Packaged with a 5.1 Surround Sound audio track, the audio presentation of Jeepers Creepers 3 was clean and clear and able to be heard and understood without any distortion to the track.  However, the included audio track was considerably bland and doesn’t really do much in terms of immersion for the audience.  At the very least, they should have gone with the DTS-HD Master Audio technology with the 5.1 presentation as it would have done a significantly better job at placing the audience into the middle of the action.

Jeepers Creepers 3 comes packaged in your standard single disc Blu-ray amaray case.  Within that case is the standard Blu-ray copy of the film, the disc featuring artwork that matches that of the case art.  There are no DVD copies of the film included with this release, nor are there any digital copy redemption pamphlets.  There is no slipcover available with this release. 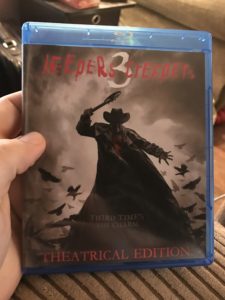 Unfortunately, the Blu-ray release of Jeepers Creepers 3 is really lacking in terms of special features.  There is an interview with Jonathan Breck (“The Creeper”).  But that’s really the only thing that was included.  It is laughable that on the back of the case, they do advertise Spanish Subtitles as an additional feature when it should really be considered a standard item within the release.

Overall, it was great to see that one of my favorite film franchises get an additional feature.  But after sitting down and watching Jeepers Creepers 3, all I could do was ask myself “why” as this film was a clear cash grab.  My wife and I watched both cuts of this film and felt that the cut that the SyFy channel did was absolutely horrible and that the Theatrical Cut that’s included in this release did a significantly better job at conveying the story that they set out to tell.  If you want to see what was changed between the two cuts, there are various videos out on YouTube that explain the differences between the two cuts.  The overall visual and audible presentation of this release was nice, clean and understandable; however, it could have been a lot better in terms of audio as it doesn’t offer much in terms of immersion for the audience whatsoever.  The special features are seriously lacking on this release, and it’s still funny that they advertised the included Spanish Subtitles as an additional feature.  If you’re on the fence about picking this film up for your collection, I’d highly recommend that you wait for it to drop in price and be well below $10 because Jeepers Creepers 3 is definitely not worth paying full retail for.