Dig long enough through a director’s back catalog and you’re bound to find something that doesn’t quite work: Guillermo del Toro’s sophomore feature Mimic is a complete bore, Spielberg’s 1941 never really comes together, and John Carpenter made the grand disaster Ghosts of Mars. These can be formative experiences not only for directors but for fans as you look back at the director’s oeuvre, illuminating not only the changes they’ve made over the years but also showing what remains consistent with someone’s vision. Some directors, however, seem to have a strong grasp of their vision from the get-go. This sort of talent is incredibly rare, although I’d rate Christopher Nolan and David Lynch as maintaining a strong and consistent voice throughout the whole of their career, and there are some that would make a case for director Brad Bird who, until his latest film, was incredibly consistent and impressive. While The Incredibles was undoubtedly the film that introduced his singular talent for direction to the world, his directorial debut The Iron Giant, has held a special place in the heart of many of the fans who have sang its praises for the years since its widely ignored release. 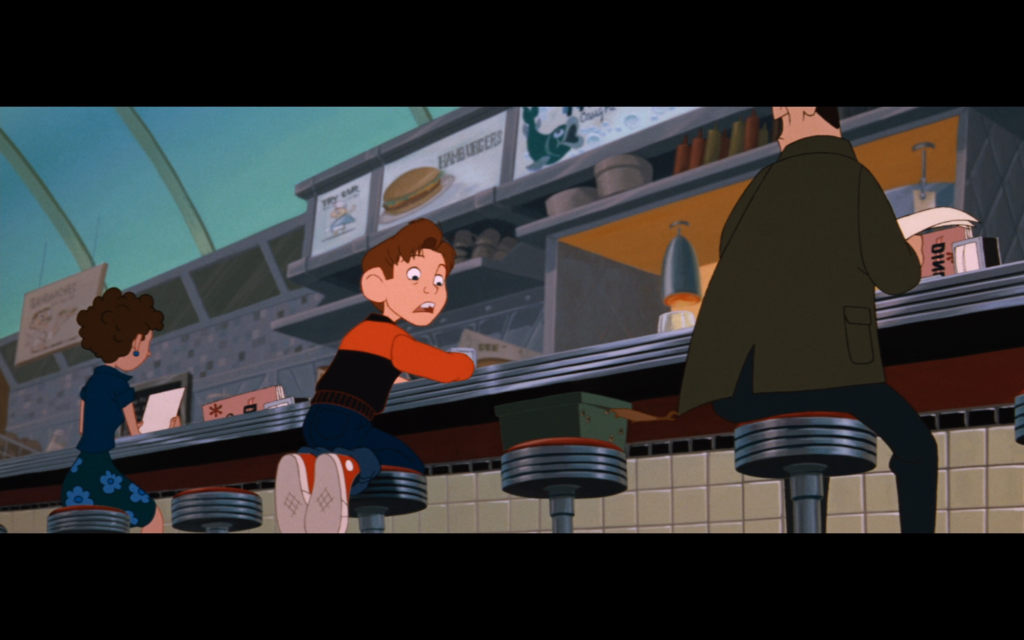 The Iron Giant had a troubled production history, originally planned as a musical under the wing of Pete Townshend of The Who. It was only when Bird was attached that the film’s production really picked up. Unlike the other animated films Bird is famous for, The Iron Giant is largely traditionally animated, computer generation imagery was only added to assist with a few scenes. Despite a smaller than usual staff for the time, The Iron Giant was produced under budget and ahead of schedule. Unfortunately, the marketing for the film never materialized in an effective manner, which many credit for how poorly the film performed domestically. The Iron Giant was a critical darling, but never found its audience. Impressed with Bird’s work on the film, John Lasseter would offer him a job at Pixar and the rest, as they say, is history. That move, however, meant that The Iron Giant was left in the hands of Warner Bros. who would fail to do service to the film on a few half-hearted home video releases.  Years of campaigning on behalf of fans, the art and film company Mondo, and finally the involvement of Brad Bird finally bore fruit when Warner Bros. finally announced a new Blu-ray release. Has Warner Bros. finally done right by this beloved yet forgotten masterpiece? Let’s take a look. 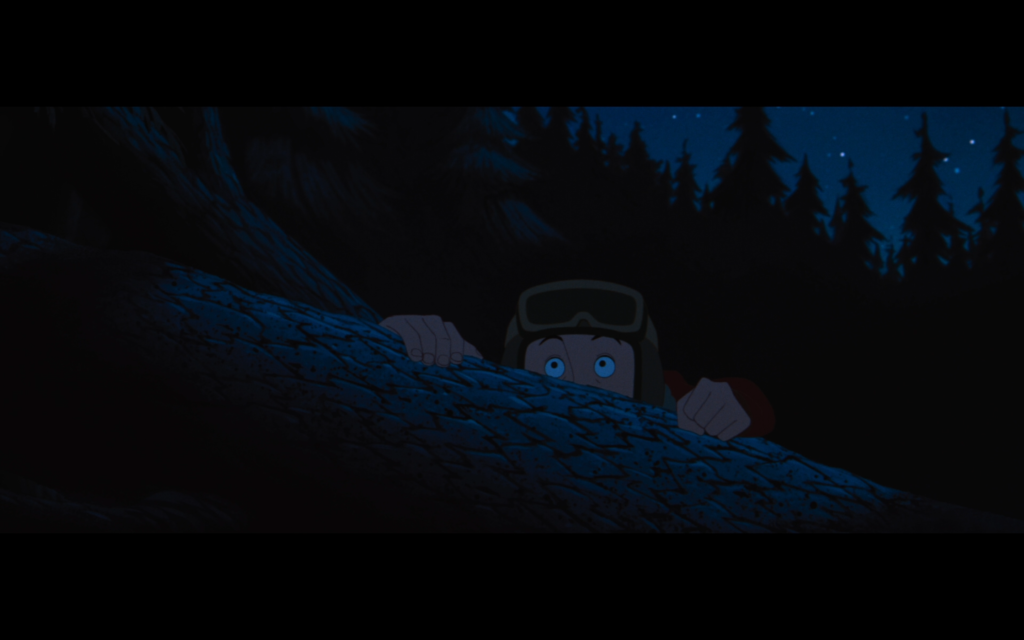 They don’t make ’em like this anymore, folks. Based on a story written by Ted Hughes and from a script by Tim McCanlies (Secondhand Lions), The Iron Giant feels like a fable from an earlier era. Set in a fictional Maine village in the 1950s, The Iron Giant details youngster Hogarth Hughes (Eli Marienthal) as he discovers the crashed remains of a giant, iron colossus (Vin Diesel) in the woods late one night. The unlikely pair become fast friends as Hogarth attempts to hide his massive new companion from the prying eyes of the townsfolk, not to mention his beatnik friend at the junkyard (Harry Connick, Jr.) and his own mother (Jennifer Aniston). However, something so massive can’t stay a secret forever as Hogarth and the Giant come under the investigation of government agent Kent Mansley (Christopher McDonald). After the giant reveals his true, destructive purpose after an accident, Hogarth and the Giant are separated, leaving the Giant vulnerable to discovery. The film reaches its climax as the Giant learns what it means to be more than a weapon. 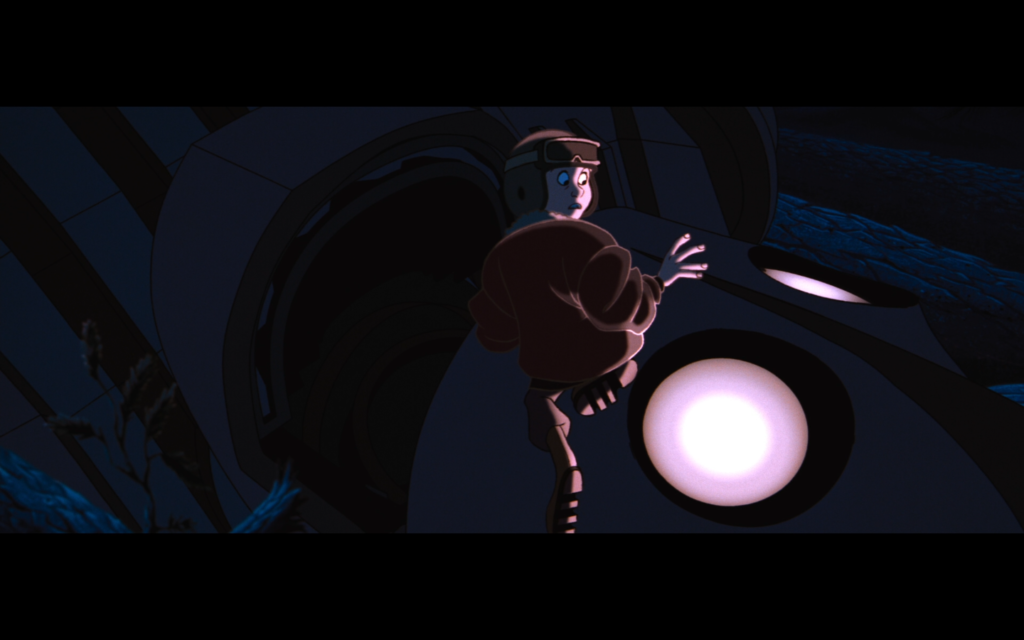 The simplicity of this story is masked to some extent by the science fiction element that the narrative hinges on, but don’t let that confuse you. Deep and abiding questions or morality, what it means to be human, and even an engagement with the philosophy of pacifism are on display here. It’s no coincidence that the artistic team took massive inspiration for the startling artwork in The Iron Giant from the work of geniuses like Norman Rockwell and Edward Hopper. The coast of Maine comes alive as the Giant and Hogarth stride from adventure to adventure, with each voice actor turning in a top notch performance (with special marks to the guest appearance from John Mahoney as General Rogard.) It’s worth noting that this release arrives with two distinct version of the films available on the discs. One is the original theatrical release while a second adds in two scenes that were missing from the theatrical cut. The additional scenes are a nice oddity for fans looking for any additional content they can get their hands on, thankfully they do not drastically affect the narrative. 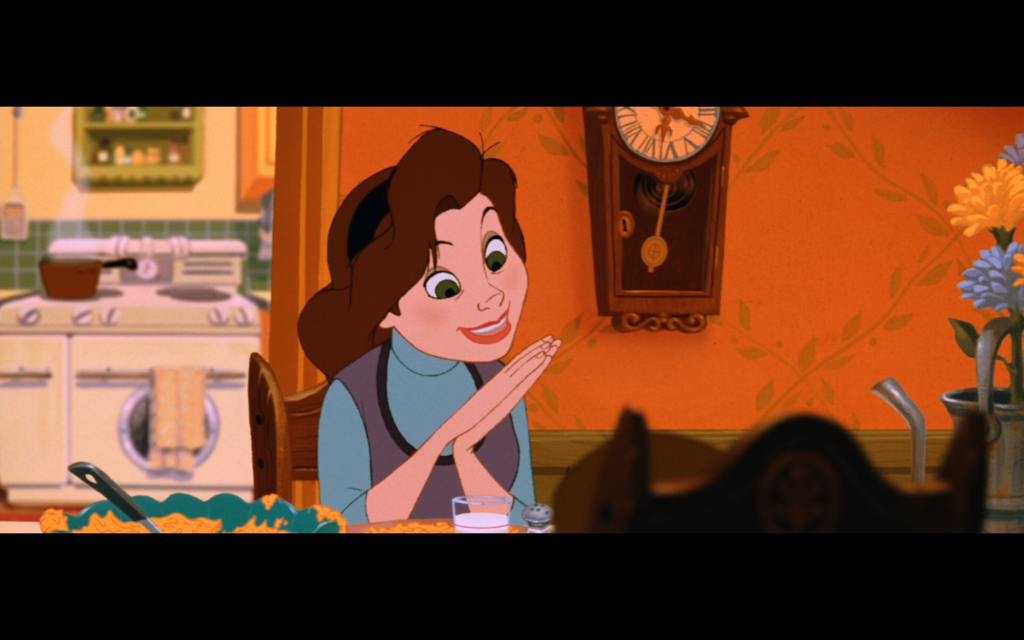 With much fanfare, The Iron Giant finally lands on Blu-ray in an exemplary scan. Displayed in its original aspect ratio of 2.35:1, Warner Bros. delivers the film with a strong, colorful presentation that’s bound to pop on any high definition set. However, Warner Bros. has elected not to look for a new or enhanced print of the film, relying on the same source used for the previous DVD editions. Die-hard fans are likely going to be disappointed to see the film not arrive with a new, 4k scan, but the results here are still stunning. The vistas and wide shots are particularly effective as the film’s autumn colors are decidedly vibrant. Unlike most contemporary animation, The Iron Giant‘s hand-drawn animation means that we’re able to see the film with a clarity and level of detail that has never before been available. This can make the sections of the film where computer generated graphics standout in ways they haven’t in the past, but that’s not the fault of the print itself. Where Disney’s video presentations of its classic films are essentially flawless, there are some minor issues with focus and color levels in a few shots in this release that may have been picked up with a new source scan. These are minor concerns however, with strong black levels to dovetail nicely with the vibrant colors. On a whole, this is a striking release that will likely please nearly every fan of the film. 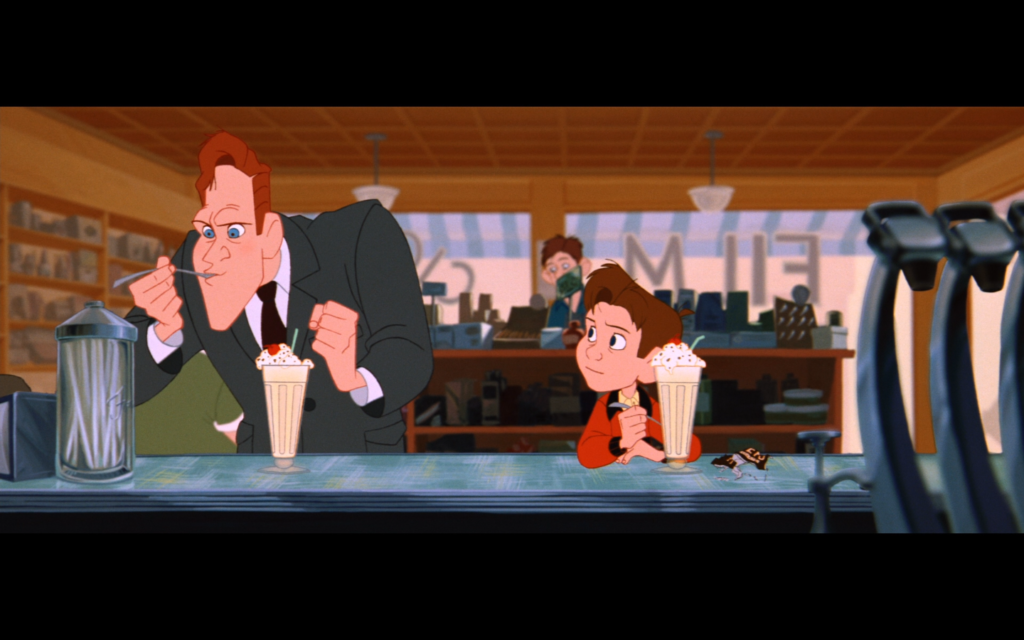 The Iron Giant arrives with a 5.1 surround sound mix that is very strong, if not quite remarkable. The use of bass is particularly effective in this release, especially when it comes to the Giant’s thundering speech. The rumble will echo across your system, which paired with the sparse number of lines that the Giant has, makes them all the more powerful. The rest of the audio range is less dynamic but still very pleasing and more than acceptable for a film that, to this point, hasn’t had any sort of respectable release. Conversations are clear, if a bit spread beyond the standard central delivery and viewers will enjoy the extent to which the entirety of their systems are used to bring the film to life, even if the mix doesn’t push its luck. 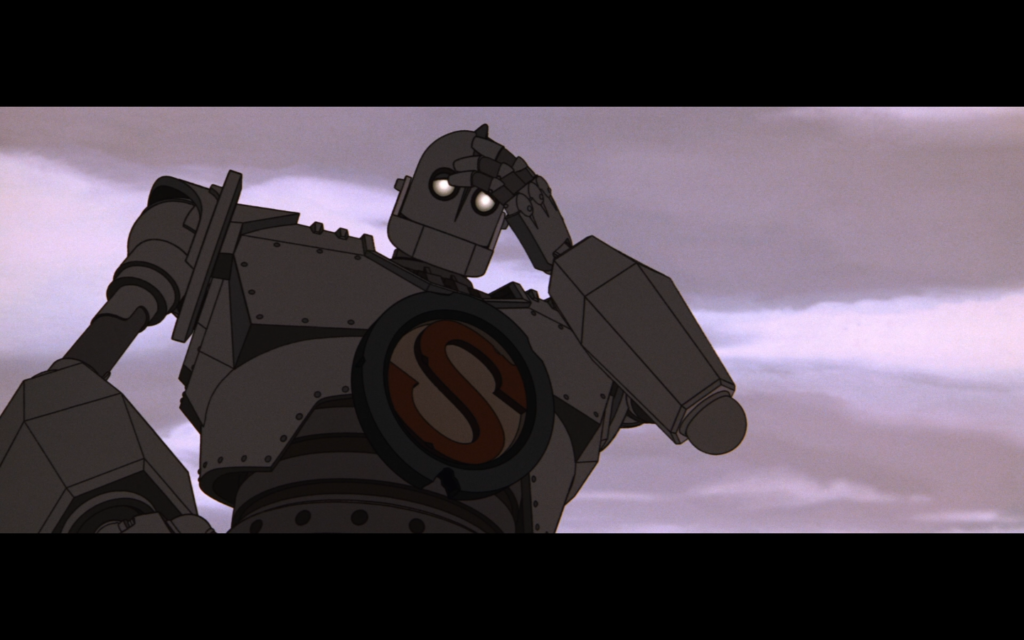 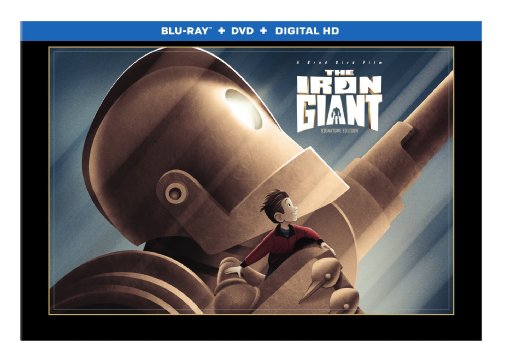 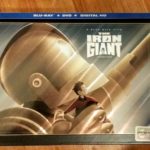 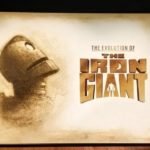 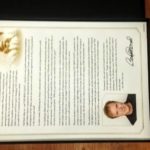 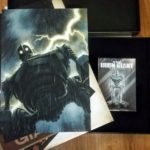 The Iron Giant arrives in two iterations: a standard Blu-ray release and a Signature Edition limited to 15,000 copies. The standard Blu-ray release features new artwork commissioned for the release (and briefly available as an art print), this same artwork is embossed on the front of the Signature Edition. Within the standard case are two Blu-ray discs with a wealth of special features, new and old included, as well as an Ultraviolet digital code. The standard Blu’s presentation is largely unremarkable beyond the beautiful new art, and the exact same case is what is included within the larger Signature Edition. However, the Signature Edition also includes a book detailing the art and production work that went into the making of the film with some interesting anecdotes and early concept art. In addition, five art prints courtesy of Mondo (who were instrumental in pressuring Bird and Warner Bros. to re-release the film in HD) are included. Without exception, they are striking. To top things off, a small figurine of the Giant and a touching letter from Brad Bird himself round out the Signature Edition’s added physical material. It’s a beautiful, and fitting, collector’s edition for a film that has always had rabid fans and defenders and will look great featured prominently in any collection. Regardless of which edition you purchase, each release includes a wealth of special features, most notably the new The Giant’s Dream documentary that delves into the history of the film’s creation. From Warner Bros.’ database:

– The Giant’s Dream: An all new documentary about the dramatic story behind the making one of the world’s greatest animated films, The Iron Giant.
– Includes both versions of the film: The Iron Giant: Signature Edition (2015) and The Iron Giant: Original Theatrical Edition (1999)
– Feature-Length Commentaries by Director Brad Bird, Head of Animation Tony Fucile, Story
Department Head Jeff Lynch and Giant Animation Supervisor Steven Markowski
– The Making of The Iron Giant – Hosted by Vin Diesel and featuring interviews with the cast and crew
– Deleted Scenes, Original Opening Sequences and Featurettes that give you an inside look into the score, character design, storyboards and animation
– Motion Gallery, New Signature Edition Trailer, and more! 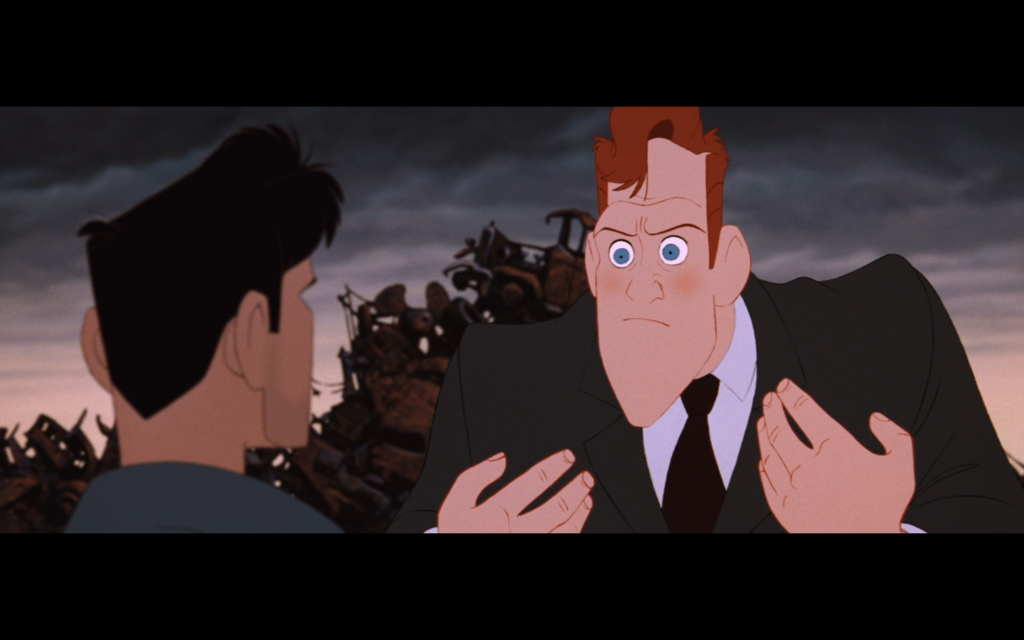 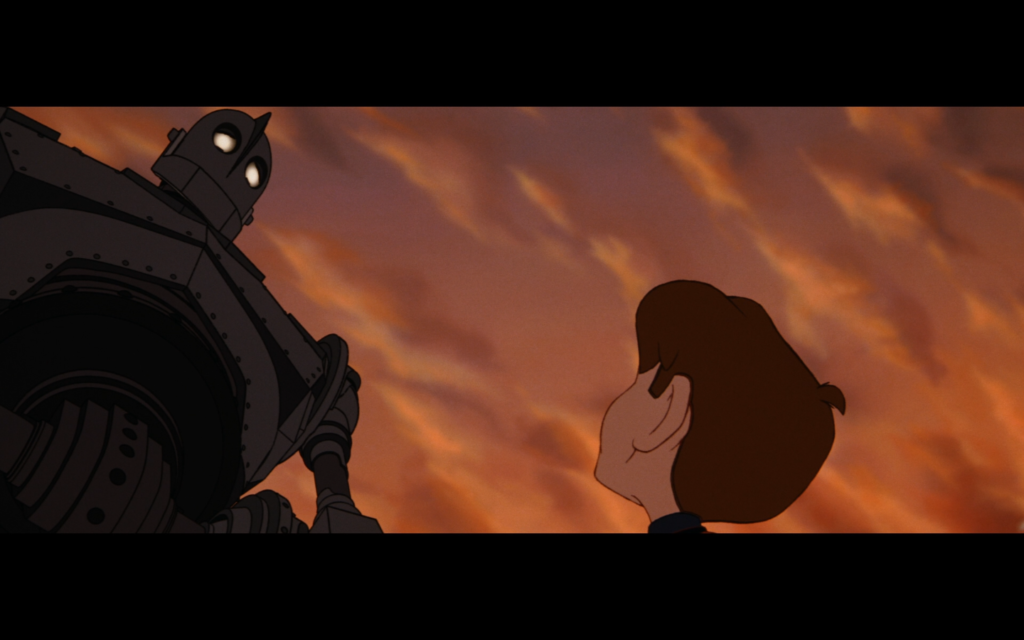 Fans of The Iron Giant can finally breathe a sigh of relief. The high definition release that so many have been clamoring for is here and it’s a winner. Remarkably strong visuals and a solid audio presentation accompany a wide variety of new and old special features to come together in this winning product. Few films have more succinctly and successfully made the case for traditional animation in the age of CG than The Iron Giant, with plenty of irony to go around considering the director is one of Pixar’s luminaries. However, for all of his successes, I would argue emphatically that The Iron Giant is far and away Bird’s best film. Few films, animated or otherwise, manage to tackle such delicate yet worthwhile subjects with the tenderness and honesty that The Iron Giant deals with effortlessly, and with style to spare. Winning performances, beautiful visuals, and strong writing all come together to form a very special film experience. No matter who you are or what kind of movies you like, you’ll find something to love in The Iron Giant.