The only real mistake that Pixar made in 2015 was releasing The Good Dinosaur as a fall movie. Inside Out is so creative, so heartwarming, and so masterful in its execution, that no animated movie released after it in 2015 could hope to meet the bar that it set. Set against a Ghibli feature, an Aardman feature, and two well reviewed animated features from Charlie Kaufman and Ale Abreu in the race for the Academy Award for Best Animated Feature, it took home the gold at this past February’s Oscars, and with good reason. 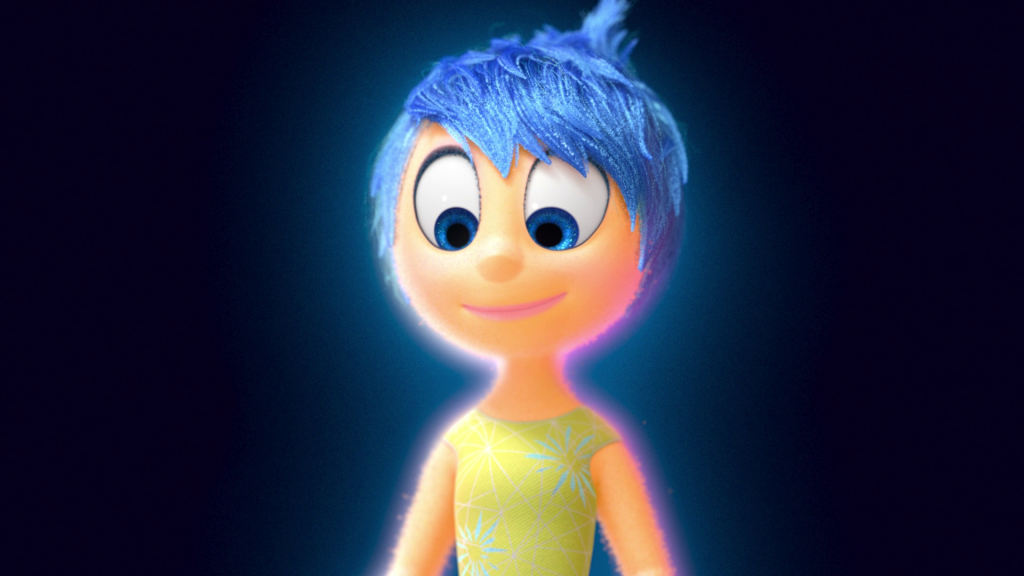 Inside Out tells the story of an 11 year old girl named Riley, but from the perspective of the emotions that work behind the scenes to make her function as an individual. Those emotions are, of course, Anger, Joy, Sadness, Disgust, and Fear. Together they function as a sort of mission control type of unit, sorting Riley’s memories, as well as guiding her reactions to the environment around her. The story inside her head runs parallel to Riley and her parents moving across the country to San Francisco, where she is faced with new challenges, such as an unfamiliar neighborhood, a new school, and all of the trouble and turmoil that follows the process of moving. As this happens, the emotions face great difficulty controlling their influences over Riley’s memories and feelings, as Sadness begins to accidentally spread her influence across Riley’s core memories, memories that are pieces of the foundation of Riley’s personality. Joy, in an attempt to stop Sadness’ accidental corruption, sucks both herself and sadness out of the control center, and into the dark corners of Riley’s brain. Joy and Sadness are then forced to go on a difficult journey back to the brain to save Riley from falling apart, while fear, anger, and disgust are left to run the show, to great amusement. 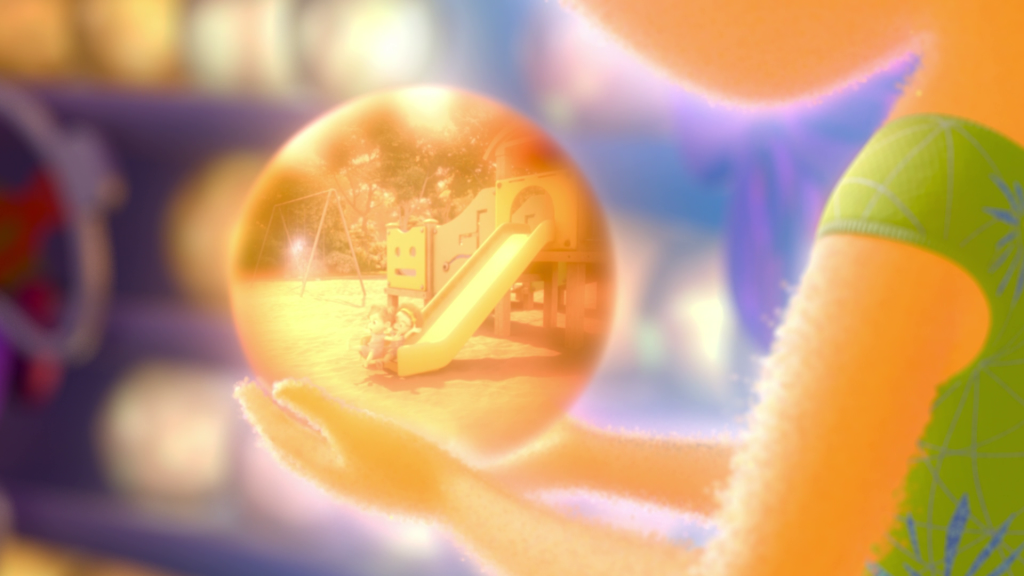 Inside Out is a triumph, embracing all of the twists and turns of moving to a new place, to show us that sometimes it’s ok to be sad, or afraid of what’s in front of us, and that in the end, we are all capable of overcoming these barriers to find eventual happiness. Coming off of the tepid releases of Monsters University, Brave, and Cars 2, Inside Out reminds just how great a feature film from Pixar can be. The animation is incredible, full of vivid colors and vast amounts of detail that bring an ambitious vision of the mind of a child to life in a beautiful way. The cast of actors and actresses brought in to voice the emotions, played by known comedy staples such as Amy Poehler as the voice of Joy, Lewis Black as the voice of Anger, Bill Hader as the voice of Fear, Mindy Kaling as Disgust, and Phyllis Smith as the voice of Sadness, are just so perfect, playing off of one another perfectly to embody their individual emotions in the most convincing manner. They’re so funny, and so easy to relate to, that it’s hard not to fall in love with and relate to their reactions and decision making.

The writing is witty, amusing, and memorable, tugging your heartstrings at all the right moments to invest you into the story of Riley and her emotions. The film’s score, written by Michael Giacchino, rises to the occasion and them some, perfectly complementing the roller coaster ride pacing of the film, perfectly matching the emotional highs and lows of the story. 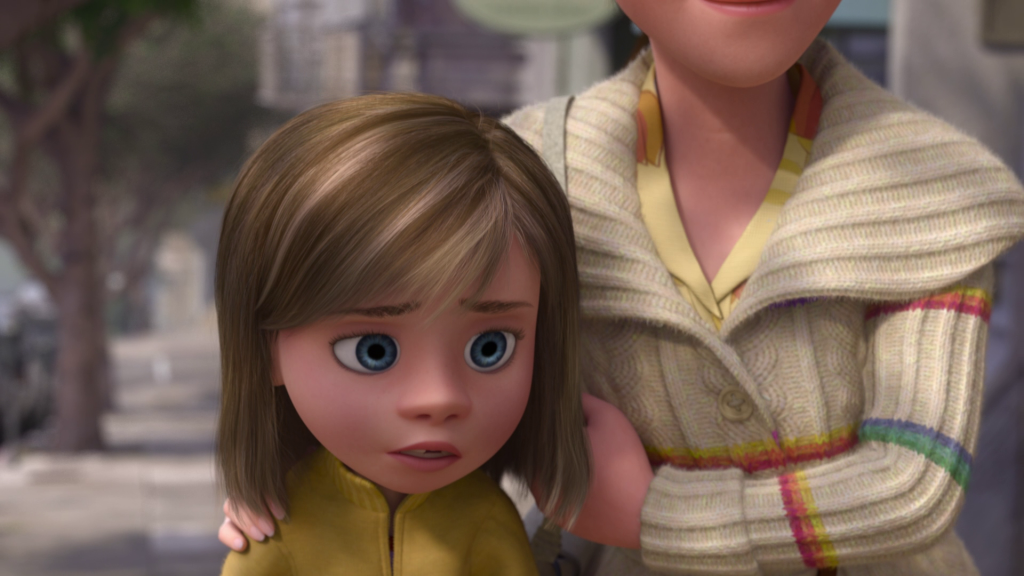 Pixar’s Inside Out is a true return to form for the studio, offering something for young children, young adults, and even those who are older, proving to be most effective for those have raised children, and can see pieces of themselves in the film’s narrative. Much like 2014’s Boyhood, Inside Out is a nearly universal film, embracing the turbulent nature of childhood in such a way that it can bring you to tears, and still have you leaving the theater with a smile on your face, as you see bits and pieces of yourself in the film’s characters and plot. This one comes with top marks, and is an absolute must see.

Inside Out was released to theaters during the summer of 2015 in 2K resolution 2D and 3D at an aspect ratio of 1.85:1. For the home video release, Walt Disney Home Video has opted to release the film in 1080p, with a slightly opened up aspect ratio of 1.78:1.

Inside Out is colorful, bright, and detail in all the right places. Walls in Riley and her family’s new house in San Francisco have an almost tangible texture to them, as do the dark and scary streets of San Francisco during a key sequence in the feature. The 2D image features incredible depth, especially when establishing shots of the various compartments of Riley’s mind are shown, such as looking through the vast library of her memories. Close ups of our emotions reveal a sharp, bristling sort of texture that ebbs and flows throughout the feature, giving them an incredible sense of texture.

Watched on my 40” 2015 Sony Bravia TV in 1080p, Inside Out was absolutely flawless, typical of your standard Pixar animated release. The Blu-ray’s image is vibrant, sharp, and has more detail than you can shake a stick at. 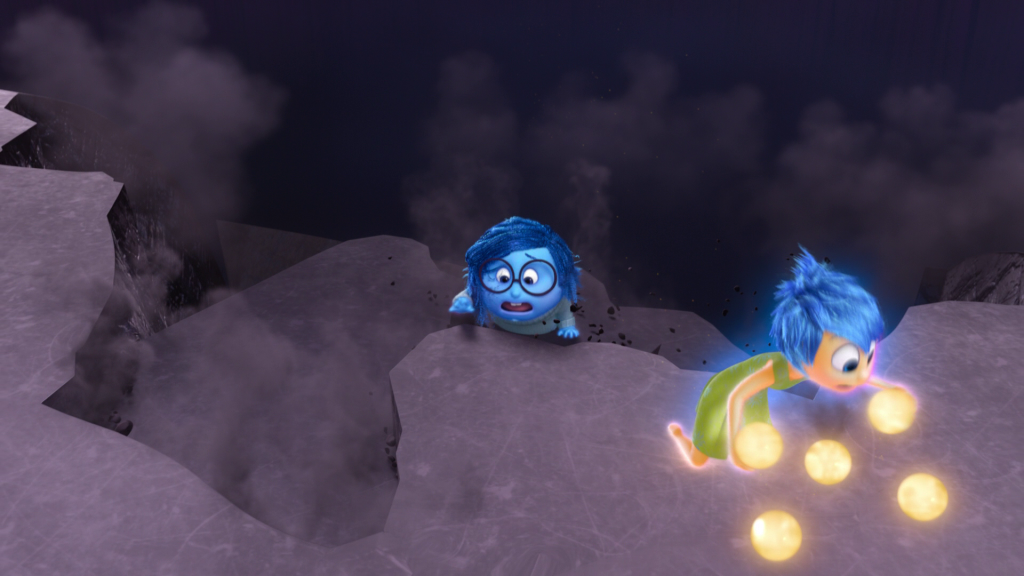 Inside Out sounds fantastic on home video. Michael Giacchino’s score sweeps through the soundscape in an enveloping manner throughout the film’s hundred minute long or so runtime. Sound effects pan across the front channels, and occasionally creep into the surrounds to immerse you in the story. For the most part, dialogue is restricted to the center channel, although on occasion it is allowed to leak into the surrounds, depending on the orientation of the scene. Subwoofer activity is excellent, providing sharp, and deep support to the events taking place on screen at appropriate times. Overall, I was pleased with the audio presentation of Inside Out.

Inside Out is available in both 2D and 3D Blu Ray, 3D in vibrant red, and 2D in standard blue in terms of color scheme. The movie is presented in a standard keepcase with two disc trays on the inside. Most copies come with a slipcover featuring the same artwork, but mine did not. The artwork is colorful, but features artwork that is identical to one of the film’s pre-release posters. The back art features a few small shots from the movie, but it mostly text that describes the movie, all of the releases’ specifications, and a list of bonus features. Overall, it is merely serviceable. 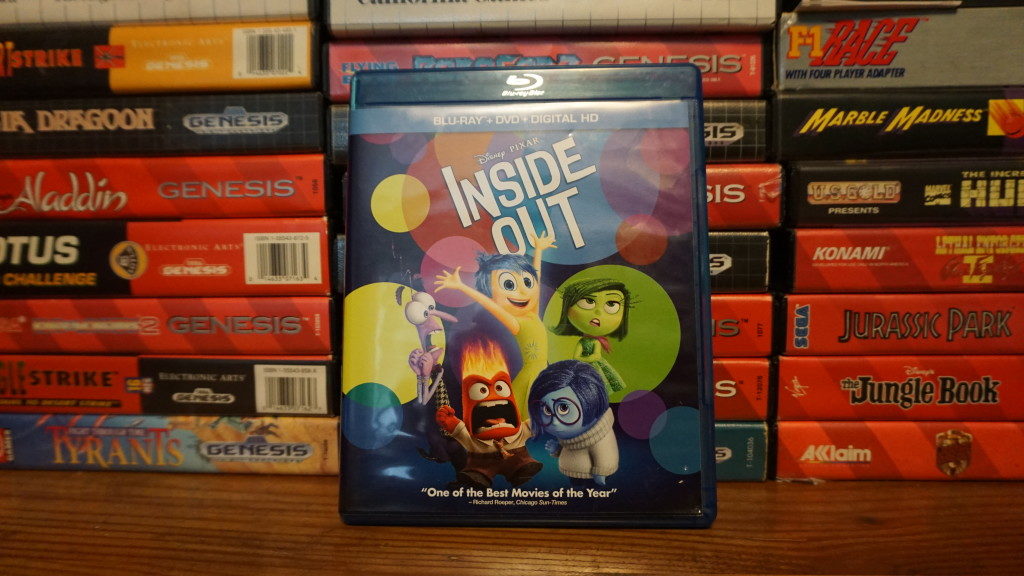 In terms of special features however, Inside Out has enough to warrant a second disc full of extras. Select extras are featured on disc one, the rest are pushed to disc two.

Lava Short Film – Pixar’s animated short film, and probably one of its weakest to date. It tells a strange love story, between that of two volcanoes, stretched over millions of years. Essentially, a male volcano sees a bunch of creatures falling in love, gets jealous, and then eventually finds his soulmate. Well animated, but fairly standard stuff. 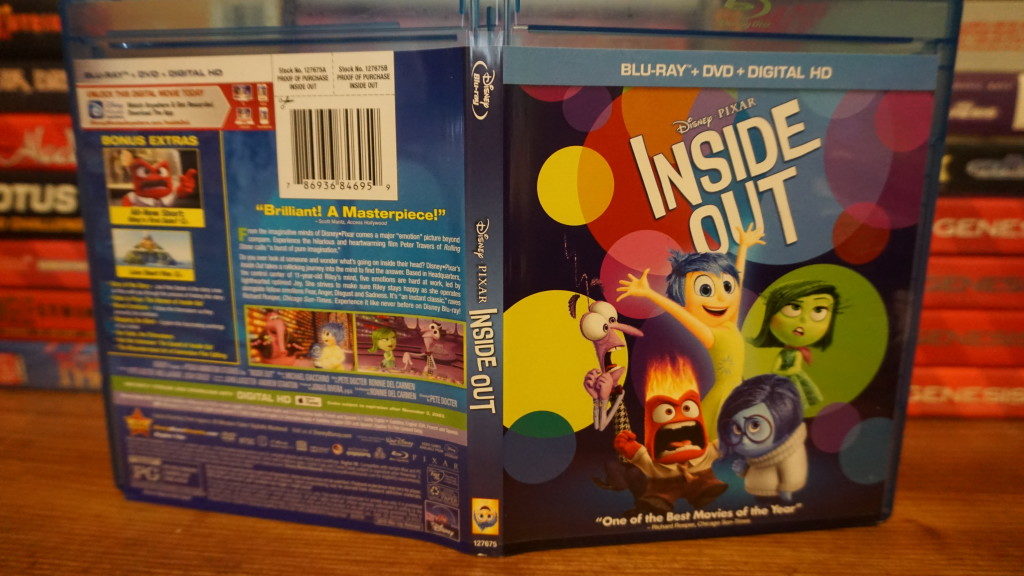 Riley’s First Date? – an animated short that continues the story of Riley and her parents shortly after the film concludes. A boy shows up to take Riley out to the skating rink, which drives her parents crazy. They frantically attempt to cope with the idea of their 12 year old daughter going out with a boy, and we get to spend some extra time with the emotions in their head as they try to calm themselves down. I couldn’t stop laughing throughout the short 4 minute run time. This one’s a real winner.

Paths to Pixar: The Women of Inside Out – a look at the female employees who had a substantial role in the production of Inside Out. We get a chance to gain some insight from a female writer, some animators, and other members who had various roles in the large production staff. It’s good to see Pixar showing that women are supported equally in their workplace environment.

Mixed Emotions – we get a chance to hear the filmmakers attempt to explain how they narrowed their focus down to the current cast of emotions we have, and how they developed those characters into those that we see on the screen today. Very interesting to get a glimpse into what was clearly an incredibly complicated process.

Feature Commentary with Director Pete Docter and Co-Director Ronnie Del Carmen – an engaging and entertaining feature commentary from the directors, in which they focus on select topics such as the history of the film’s production and the film’s cinematography. 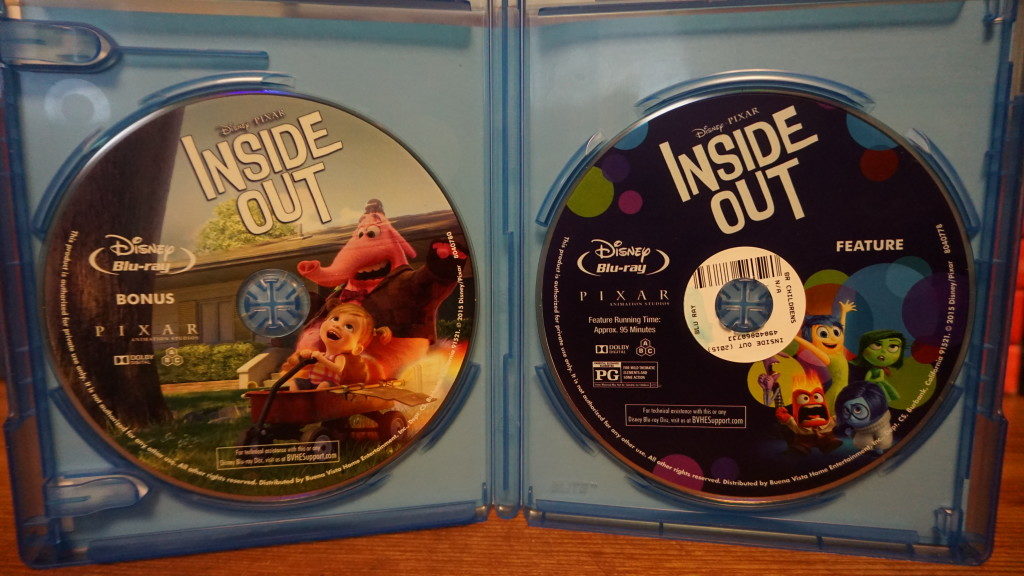 Story of the Story – a standard feature in which the crew and voice cast offer their tales of how the film’s story evolved into its final state, from its earliest inception, to meeting with Amy Poehler in New York, and working with Bill Hader on new ideas. Neat, if not a little run of the mill.

Mapping the Mind – a deeper look into how the animators and crew came to develop their interpretations of how to represent the human brain on screen. Different topics are covered, such as attempting to incorporate biological elements, to how they developed the different set pieces shown in the film.

Our Dads, the Filmmakers – a short documentary, shot from the perspective of Pete Docter and Michael Giacchino’s daughters about the making of the film, the editing process, and the addition of musical cues. This one stuck out to me as interesting, because we got to take a quick look at the scoring process for the film, I enjoyed this one a lot. 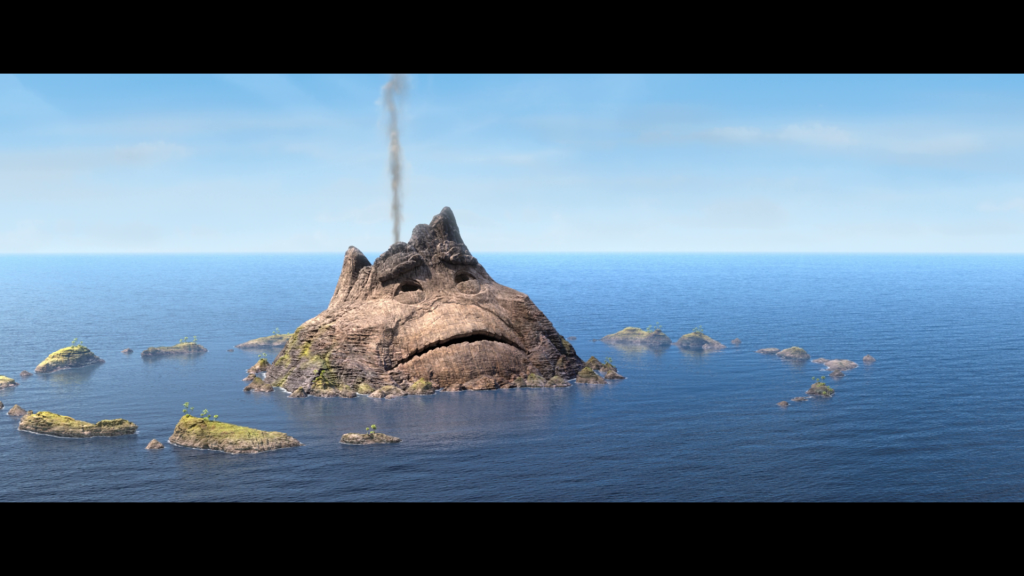 Into the Unknown: The Sound of Inside Out – a brief look at how the sound effects were designed and edited together to create the world of the film in terms of the audio mix

The Misunderstood Art of Animation Film Editing – a quick look into the editing process of Inside Out from the editing room, giving us a quick glance at the film’s editing tools, and the process that the editors go through to create the film’s flow and dialogue structure for the final cut.

Mind Candy – a weird collection of extra character moments, and short bits of animation featuring the five emotions. This one kind of feels weird, starting with random sets of movements, and finally moving into the control room with cut animation over fifteen minutes.

Deleted Scenes – a collection of four or so rough outlines of scenes from early in the film’s production, in which the characters are a bit different, and the plot of the film itself is drastically different. Most of these scenes are still sketches, but offer an interesting look at how scenes get their start in animated films. 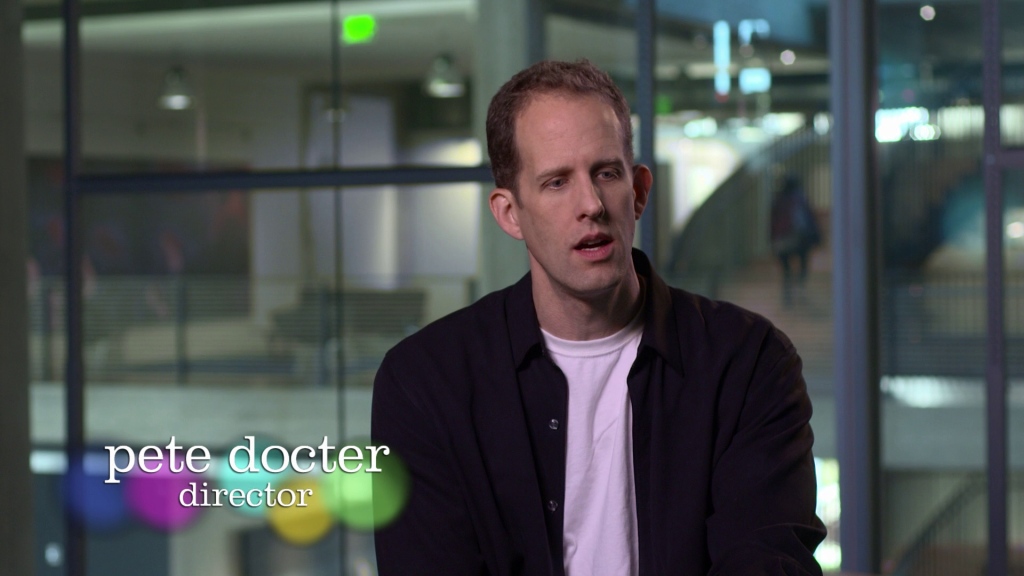 Overall, the packaging for this film is fairly standard, but the extras are great in number, and offer a wealth of information about the production of the film, and a great set of animated shorts and extras. Disney has done a great job preparing a generally excellent blu ray package. 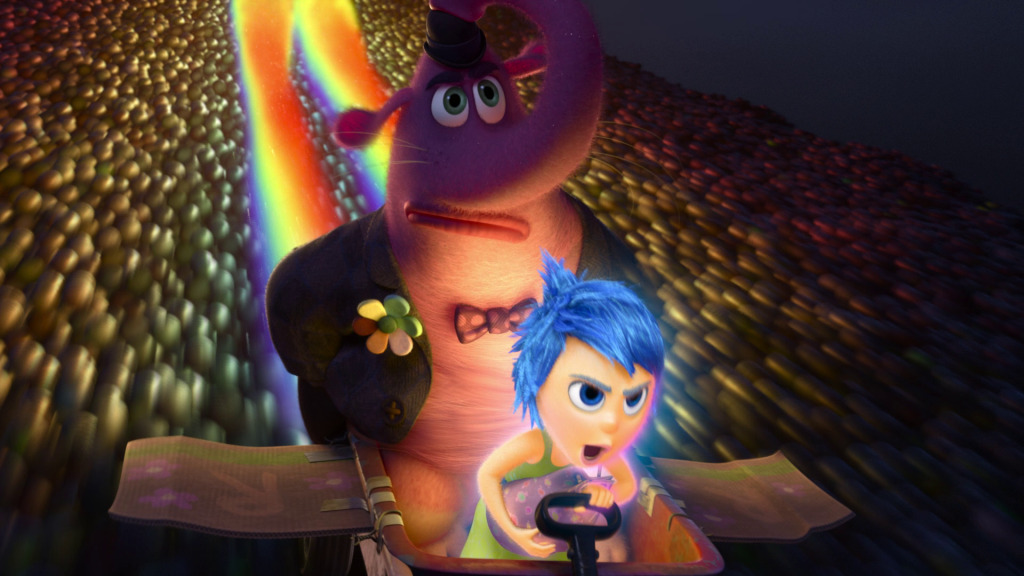 Inside Out is an incredible film, one that fits perfectly into any age group. Its story is full of heart and easy to relate to, and it’s been treated with a wealth of respect by Disney in terms of its home video release. The visual portion of the film is flawless and beautiful, with an excellent audio soundtrack to pair up with it, as well as an incredible selection of extras. The packaging could be a little more exciting, but if that’s the worst thing I can say about this one, than you should know that this one gets a full and hearty recommendation.