After revitalizing the western with efforts such as True Grit and No Country for Old Men and making a few oddball films in between, the Coen Brothers turned their heads to folk music, specifically that of the Greenwich Village neighborhood in New York City in the early 1960s. Considering their pedigree, and the quality of the film, I always felt that this film kind of flew under the radar. 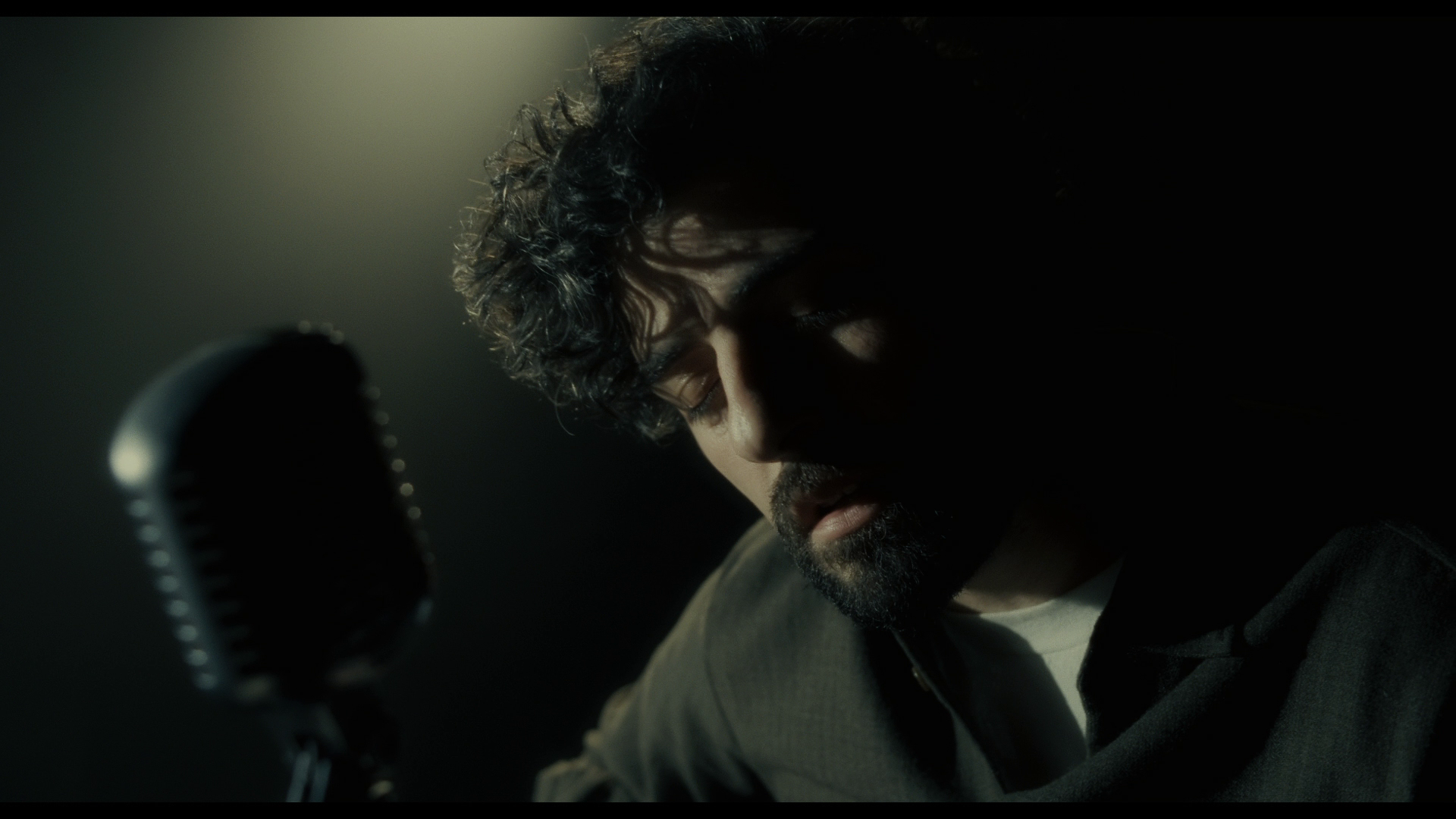 The film, of course, is centered around a down on his luck folk singer named Llweyn Davis. He spends his days crashing on his friends’ couches, playing gigs, and trying to make it big in the village scene. Unfortunately, at every turn, doors are slammed in his face, his music career isn’t taking off, and he’s starting to become a burden to the people he keeps around him. The film takes a sobering look at one man’s attempt to live the American dream, and just how difficult it is to survive undertaking such a mission. Its a testament to our ability to persevere in the face of hardship, and as the film wraps up, we don’t exactly know whether or not Llewyn is going to make it, but we know he’s not done for, and that leaves us with a little bit of hope. 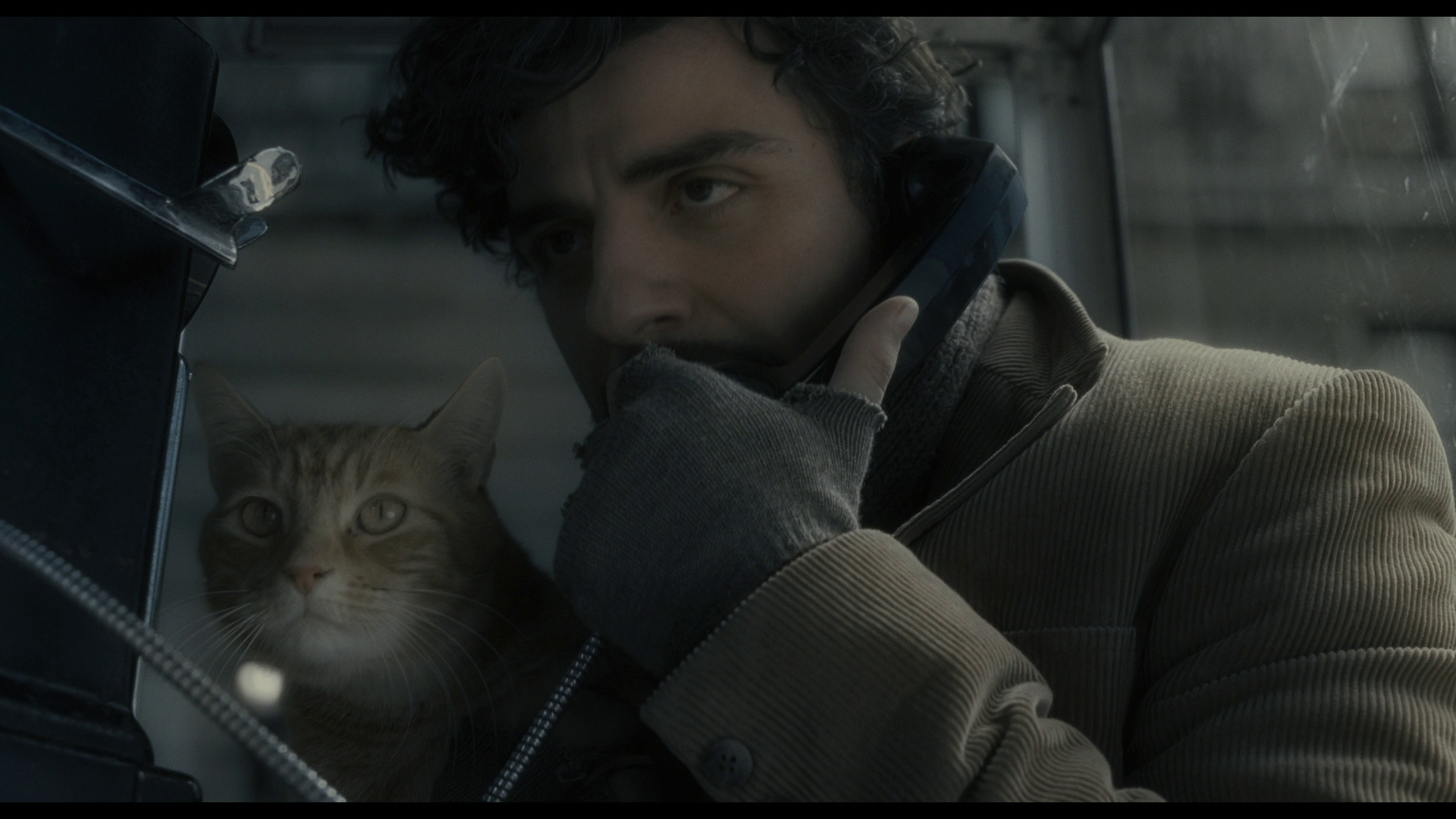 The movie does an excellent job of recreating 1960s New York, and features an incredible lead performance from Oscar Isaac, as well as great supporting performances from Carey Mulligan, Justin Timberlake, and of course, the Coen’s favorite actor, John Goodman, who plays an especially amusing role. The film is often plagued with tragedy through the eyes of Llewyn, but select moments are incredibly humorous, thanks to our supporting cast. The musical numbers throughout the film are incredible, and bring the film up to masterpiece level. 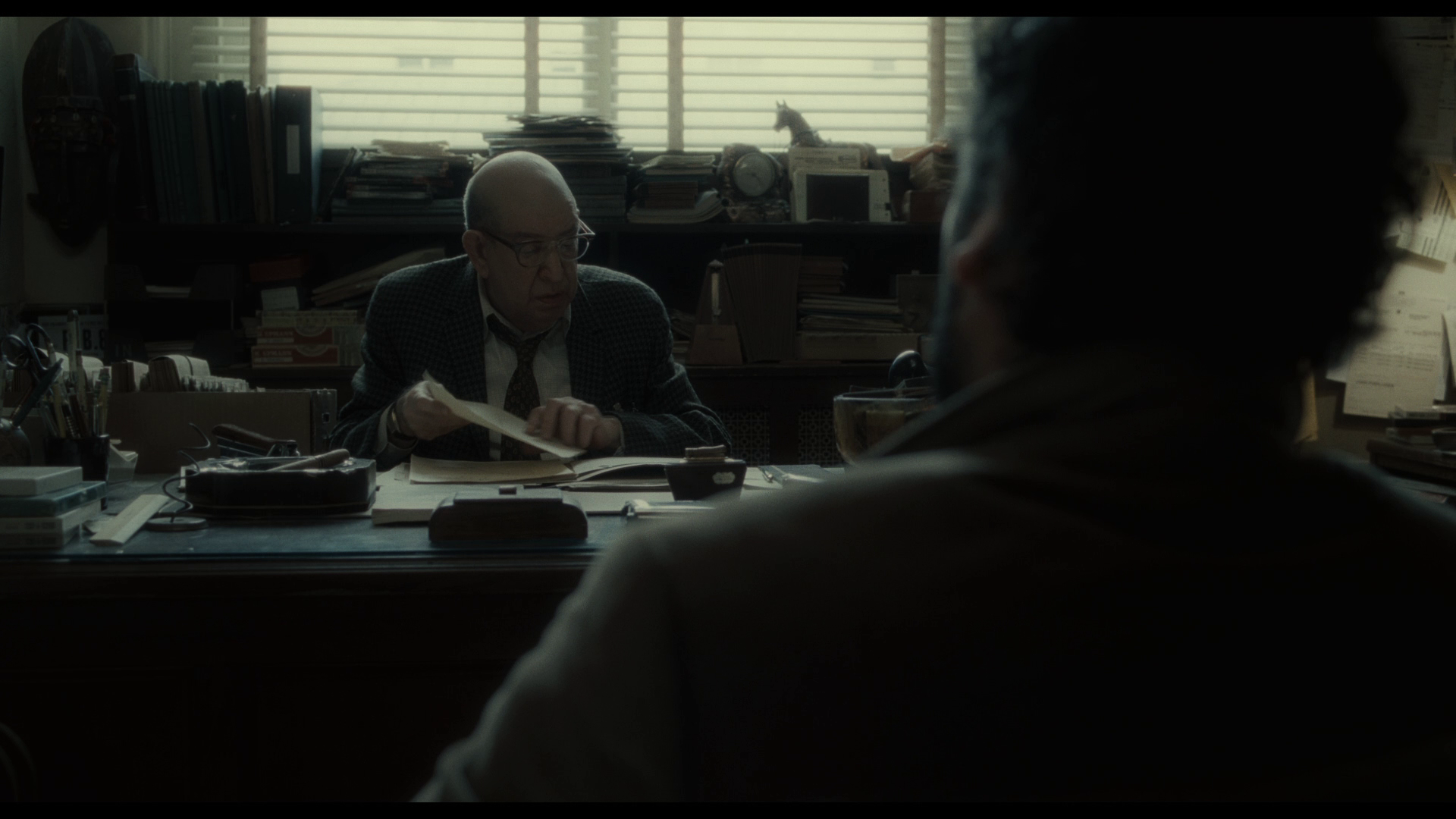 Inside Llewyn Davis was shot on 4-perf 35mm film stock for an aspect ratio of 1.85:1. The film was scanned at 4K to create the 1080p image for this Blu Ray release. There are slight letterboxing bars on the top and bottom of the frame to recreate the theatrical aspect ratio. 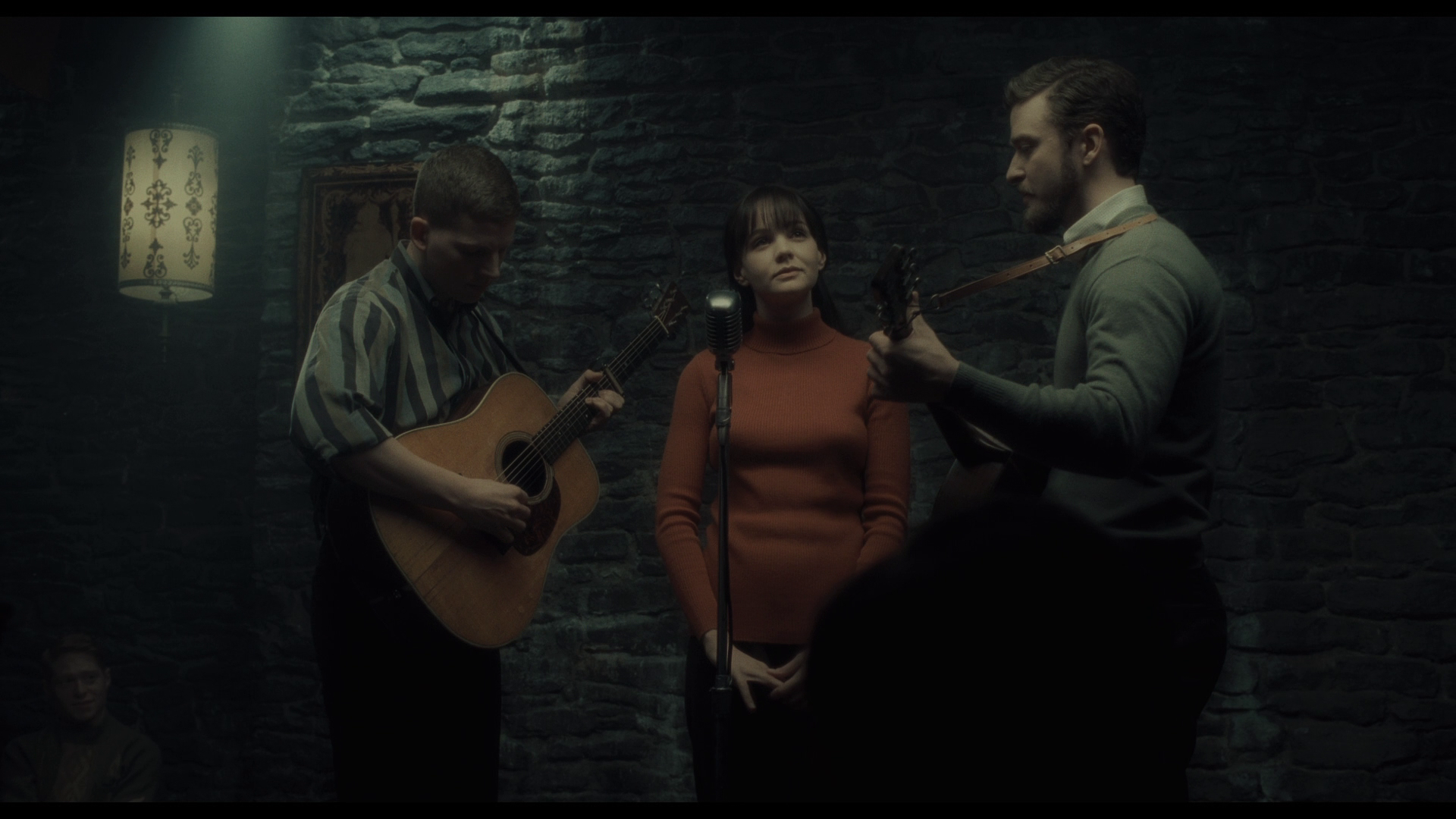 The film, which carries a muted, cold view of New York during the 1960s, has an appropriately muted style. Colors are mostly dark, with a lot of greys, blues, and browns, without a terrible amount of deviation from that palette. That being said, the film looks sharp, and for the most part, each shot is full of rich detail. The transfer is topped off with a light, but consistent level of grain inherent to the capture medium. It won’t blow your mind, but it is a beautiful transfer, faithful to the image I saw projected during its 2013 theatrical run. 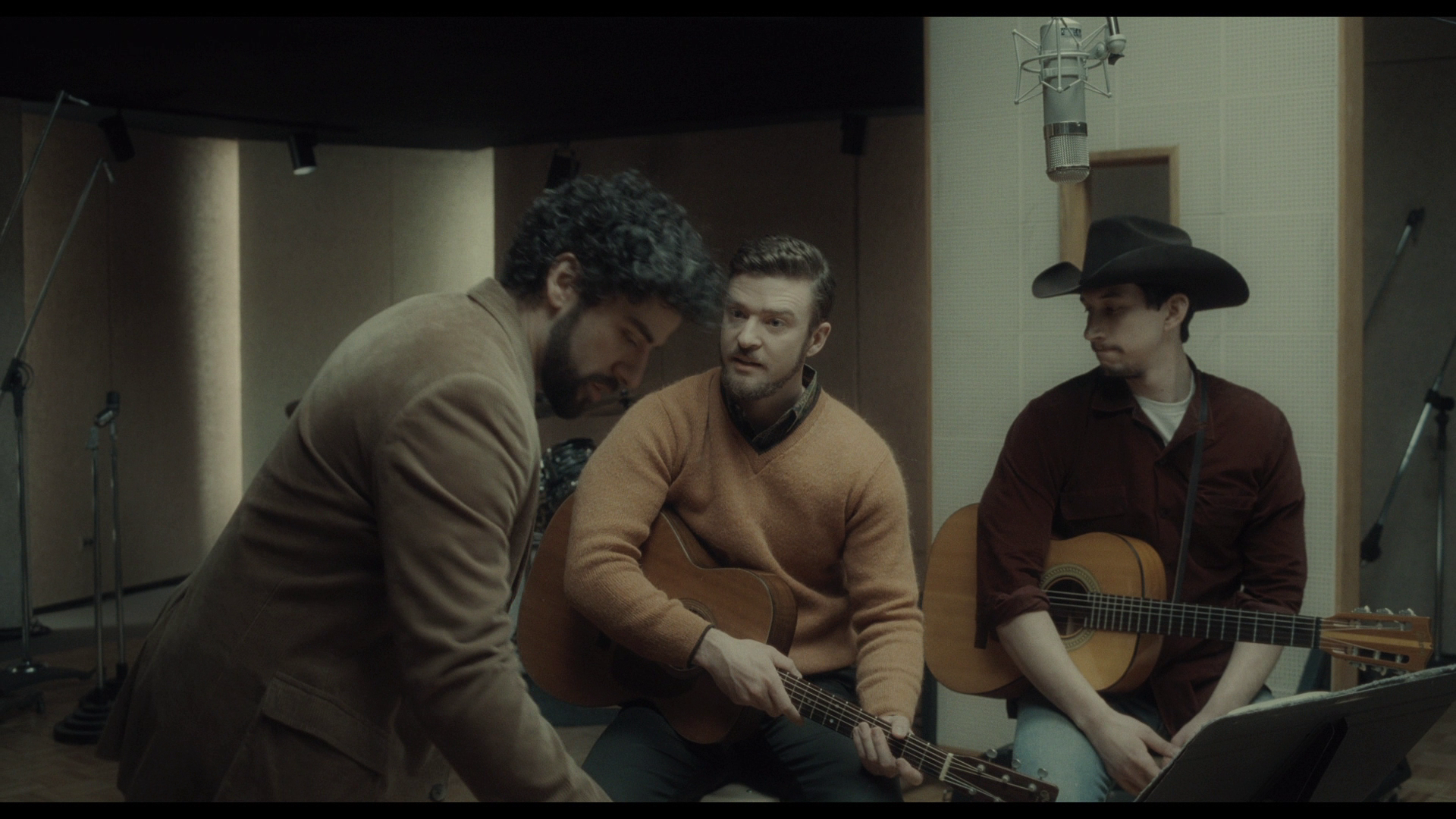 The film is presented in 5.1 lossless DTS Master Audio. While I have a sub woofer and two surround speakers, they saw nearly no action during the run time of the film, except maybe when characters are in a car, or on a train. That’s not to say the audio is lifeless. The front speaker spread is filled with full sounding music, atmospheric noises, and sharp dialogue. This is a film that really knows how to be quiet and reserved, and the audio track represents that appropriately. 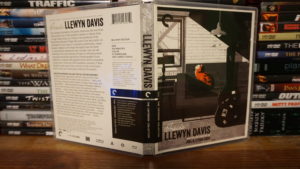 The packaging for this release is fantastic. Compare it to the original Blu Ray release found here, and you’ll immediately notice how much more creative and eye pleasing the cover art for this release is. Notes about the release and the movie are featured on the back cover of the standard Criterion plastic case. Also included is a small poster, on the back of which is an essay about the music of the film, by Kent Jones, as well as additional info concerning the release. 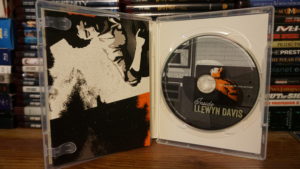 Criterion always knocks it out of the park with its Blu Ray releases. Whereas the original Blu Ray release only included one supplement, this release features 6 supplements, as well as a commentary and a selection of 6 trailers.

The first of the six featurettes, Inside “Inside Llweyn Davis” is a holdover from the movie’s original Blu Ray release, and is a moderately detailed behind the scenes look at the making of the film. Different topics are examined in detail, such as the rehearsals of the film’s songs, as well as the live performances of the songs on set during the shoot. Both Ethan and Joel Cohen are present, discussing the production of the film, as well as their collaboration with music supervisor T Bone Burnett. 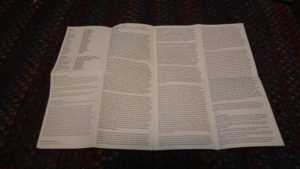 The second featurette, titled, “The First Hundred Feet, the Last Hundred Feet,” is an in depth conversation between director Guillermo del Toro and the Coen Brothers, in which they discuss their filmography in detail, discussing the cinematograpy and production designs of their film. 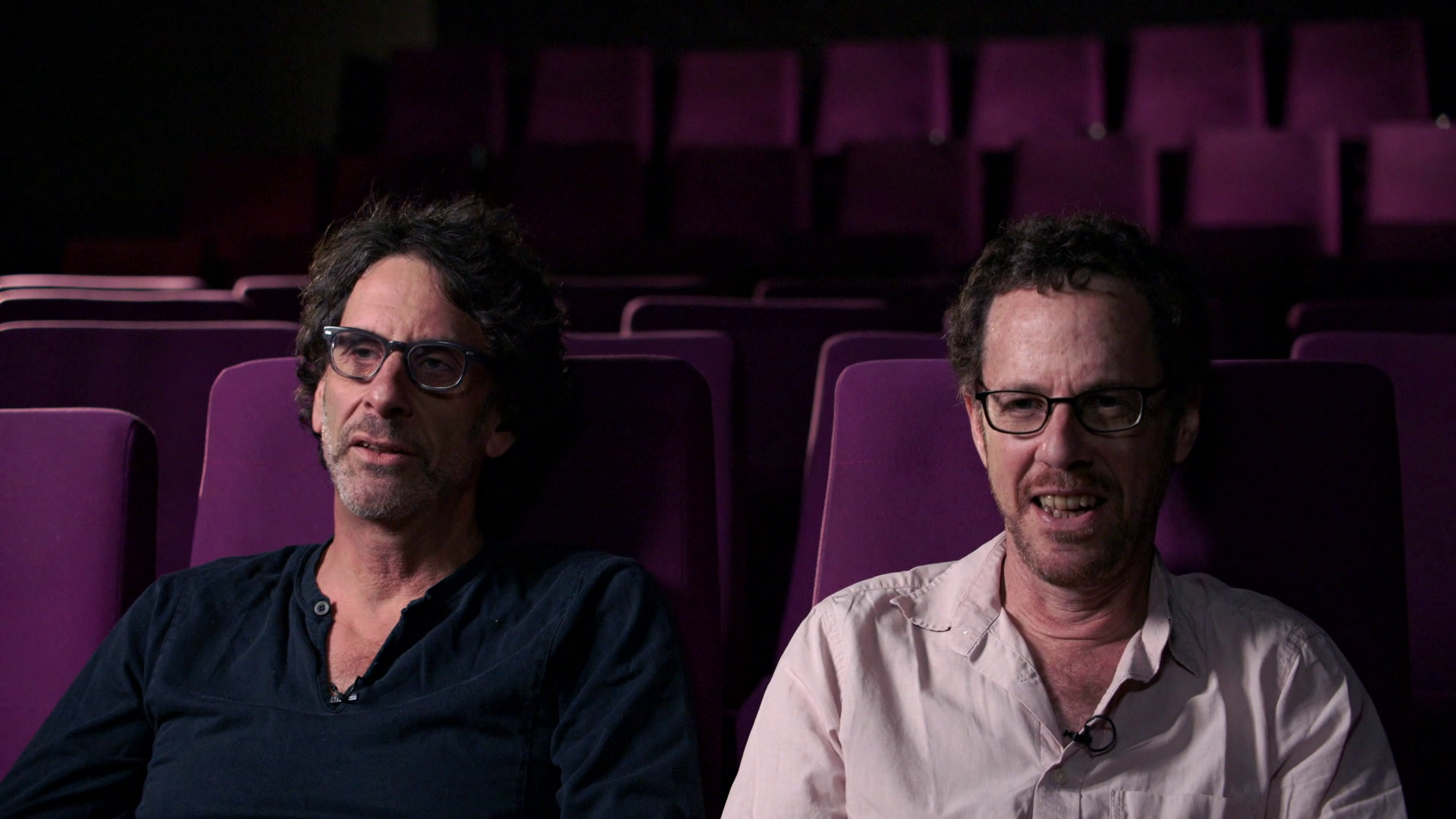 Third on the list, and probably the most exciting to those who really got into the music of this film, is a full length concert documentary titled, “Another Place, Another Time,” which covers the production of a large scale concert performed at the New York City Town Hall by various modern folk music performing groups. This feature is a real treat is you loved the music of the film, and features famous artists such as our leading man Oscar Isaac, and popular musician Jack White. It runs at an hour and forty five minutes, and might be a little long winded for those who didn’t care so much for the folk music. 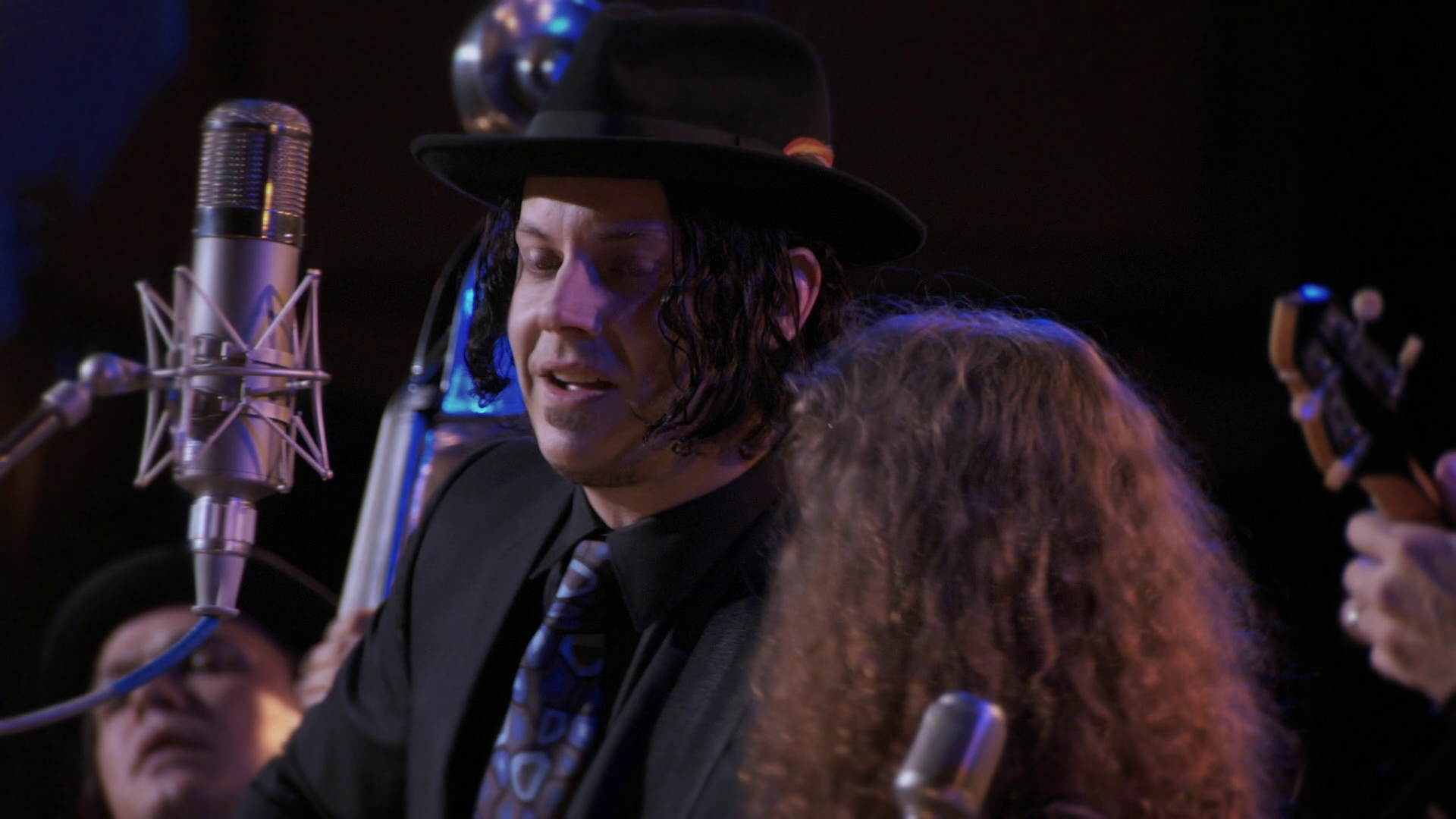 Next up is a supplement titled, “The Way of Folk,” is a pseudo-animated discussion between the Coen Brothers and T Bone Burnett about the folk music that they love and listen to, and how it shaped the songs of the film. 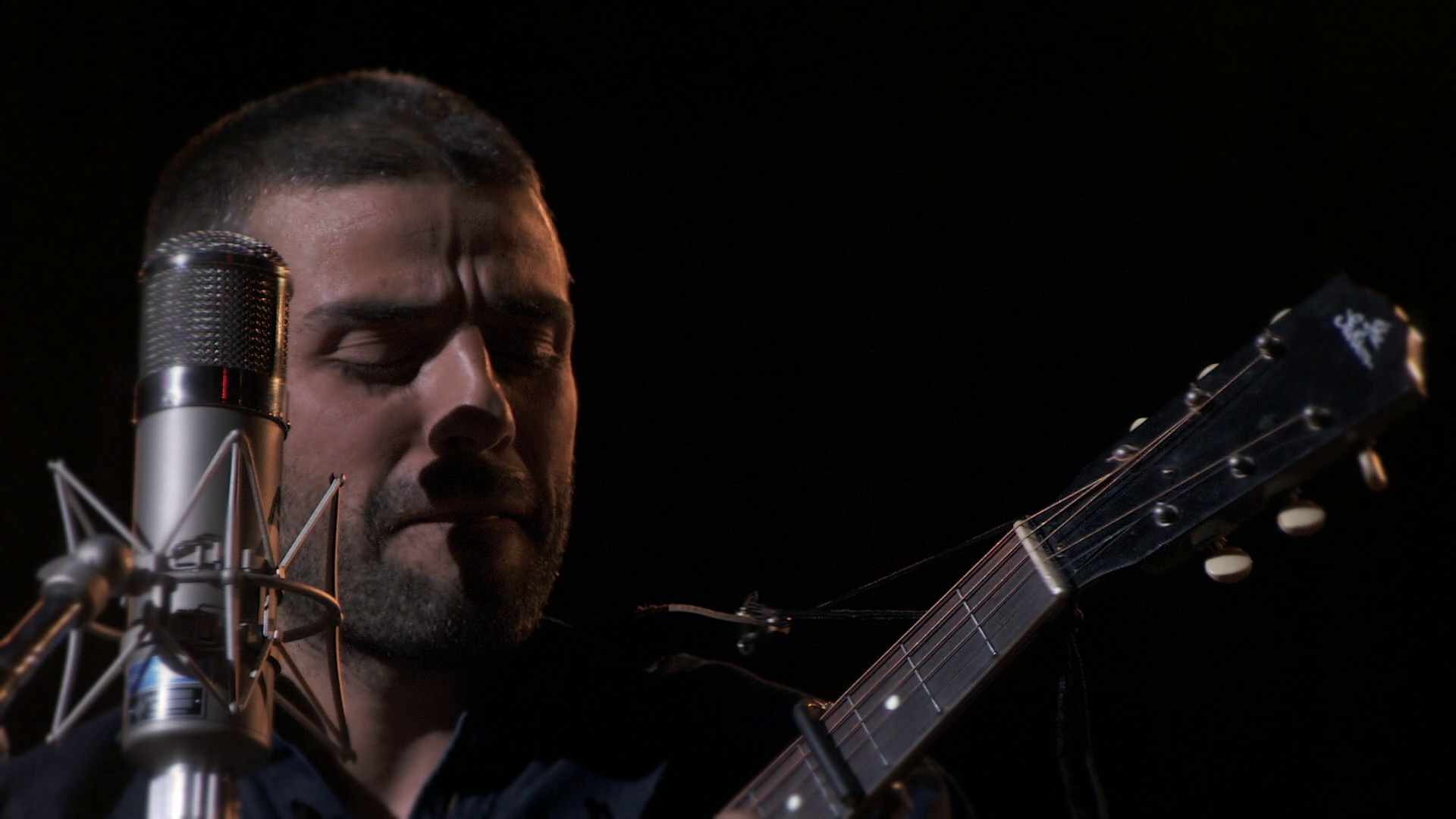 The last two supplements, titled, “Before the Flood,” and, “Sunday,” are historical pieces, one by a writer who wrote about the life and times of the folk singer who inspired the character of Llweyn Davis, David Van Ronk. The second one, “Sunday,” is footage that was captured during a police disruption of a large folk music concert from the early 60s, highlighting the dedication and passion of these artists in their attempt to fight for their music. 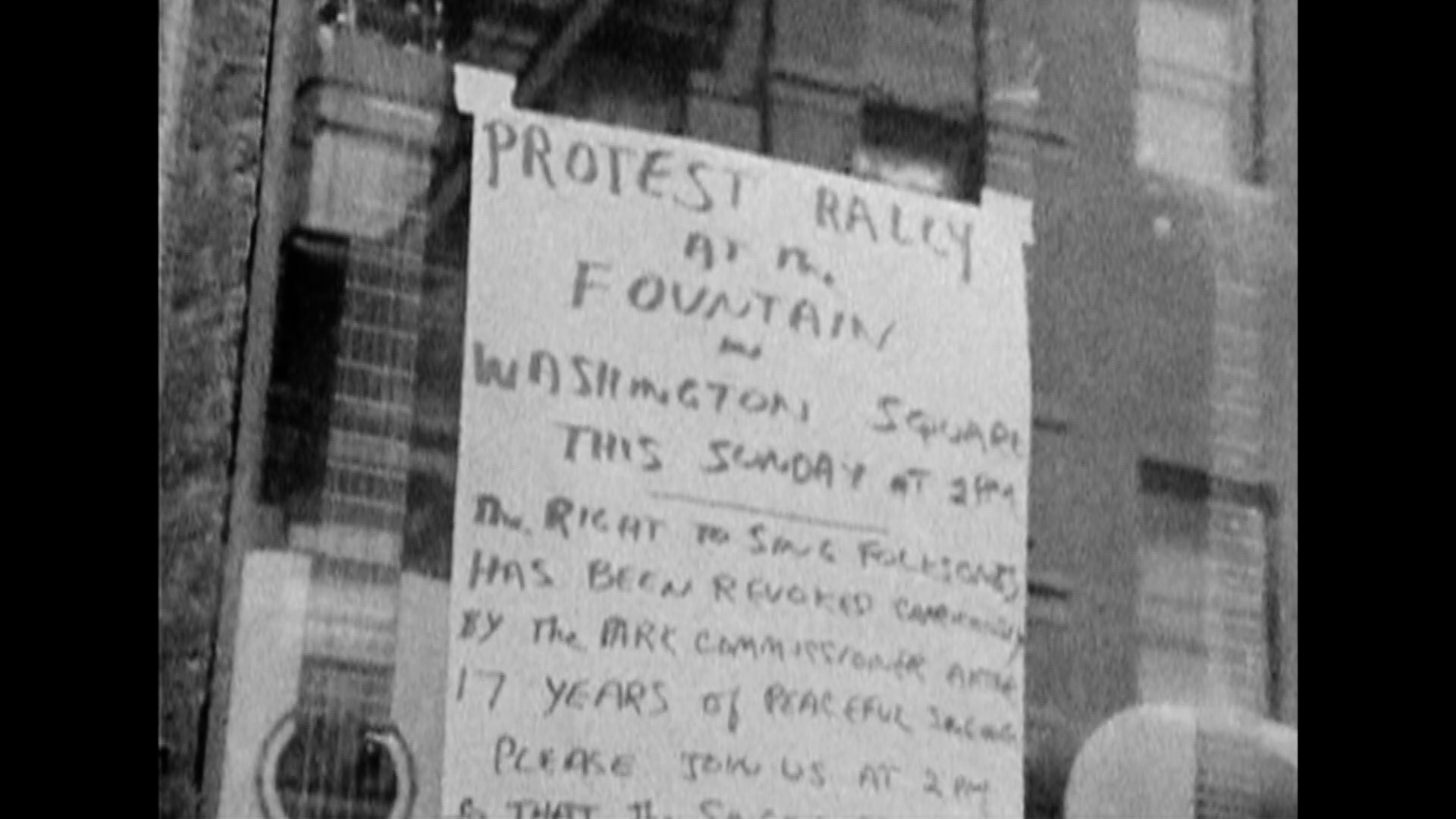 The six trailers are exactly that: Six trailers with various shots from the film. Nothing crazy. 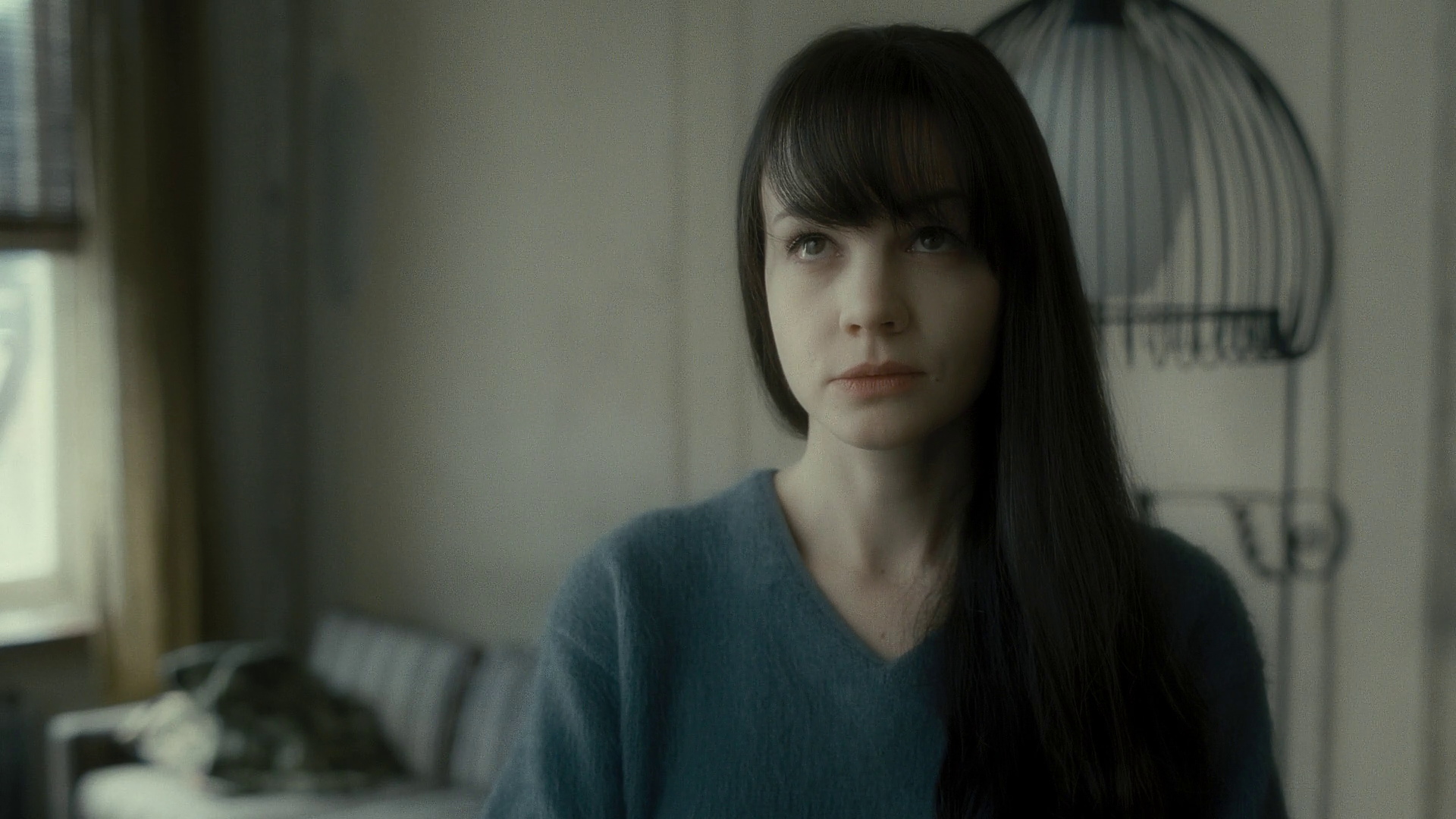 The commentary included with the film is performed by three separate authors who have written about the folk scene in the past, discussing the film, and the different pieces of it, breaking it down into how it relates to what actually exists according to history. Its fun to listen to, as the commentators are lively and engaging. 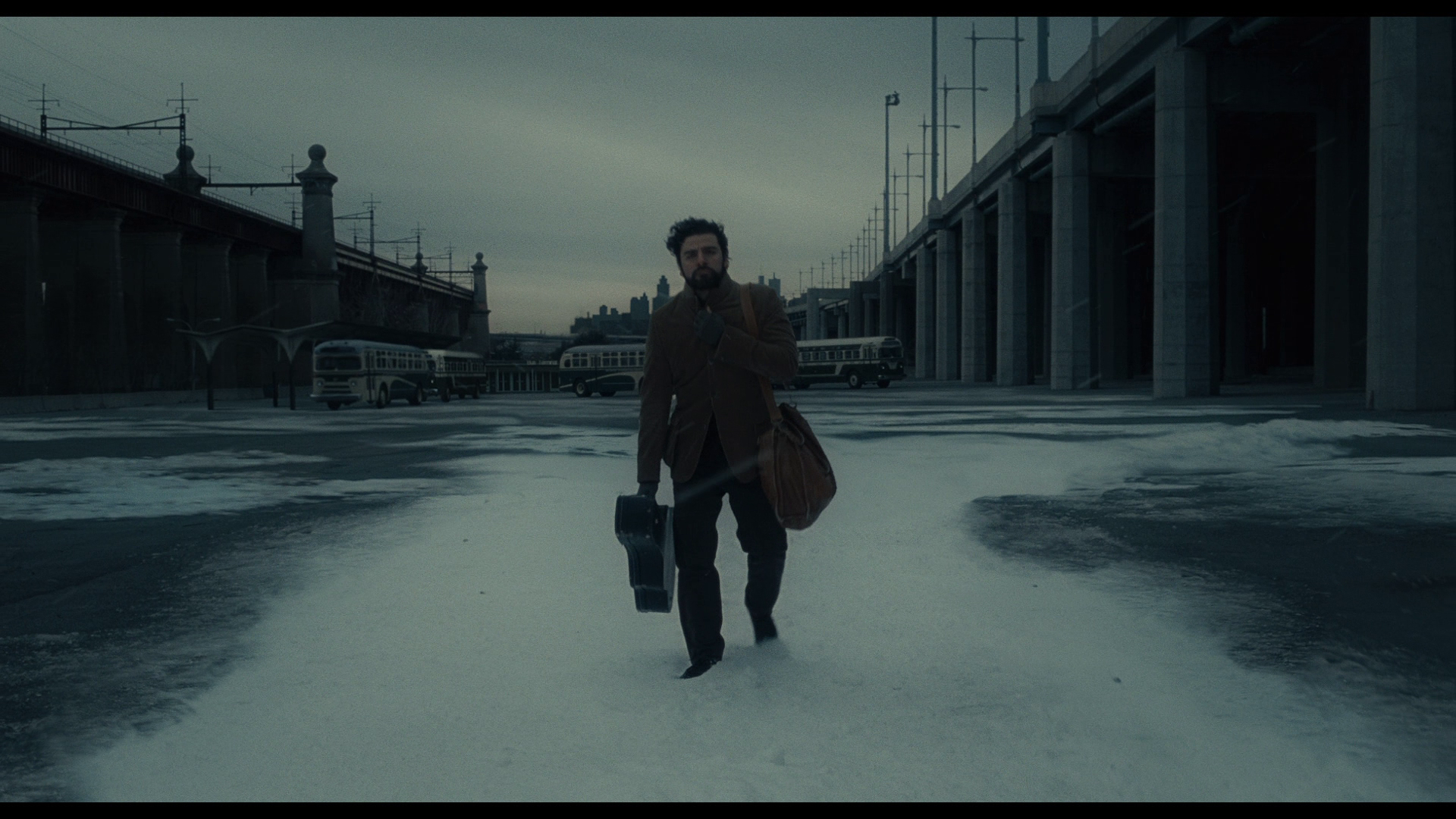 Inside Llewyn Davis is quiet, and sad, and it doesn’t particularly have a happy ending where lots of loose ends are tied up. And yet, as the credits roll, I can’t help but feel satisfied. Llewyn’s struggle is one that we all face in our attempts to achieve our goals. His ability to continue soldiering on after each set back is admirable, a trait I imagine we’d all like to share. Criterion’s release of the film on Blu Ray is excellent, with a large amount of special features that are likely to satisfy any interests you might have in the topics that the film covers. The visual content is fantastic, and the audio, while not exact enveloping, does a great job of representing the natural style that the Coen Brothers’ chose to implement when creating the film. This one is an absolute must have.