The 80’s represents a lot milestones for a lot of people: the end of the cold war, the beginning of personal computing, and for a certain section of youth: the golden age of the slasher flick. The comfort that one derives from a formulaic jaunt in the cinema following the exploits of unfortunate youth at the mercy of a psychotic killer is as time-tested as it is paradoxical. Released within a month of the blockbuster success that was Wes Craven’s A Nightmare on Elm Street, Larry Stewart’s The Initiation struggled to resonate with wide audiences during its brief theatrical run. Still, the film manages to put a somewhat fresh spin on the standard fare of the time, gleefully mixing the psychiatric and familial elements of Halloween with a consumerist setting that recalls Dawn of the Dead (and draws strong comparisons to Killbots / Chopping Mall, released two years later) until you’re left with a delightfully gory murder mystery starring then unknown Daphne Zuniga (Spaceballs, Melrose Place). Now, Arrow Video has pulled The Initiation out from the morass of the 80’s and thrust it into the hands of home video aficianados with a new Blu-ray release. Is it worth the trip down memory lane? Let’s take a look.

Kelly Fairchild (Daphne Zuniga) is a college co-ed with a legion of problems, not only is she knee deep in pledging to a high profile sorority, she struggles with lifelong nightmares and a bout of amnesia from her youth that still leaves her with questions about her early years. As Daphne begins to explore her past with the help of a college professor who specializes in studying sleep issues and nightmares, she also learns that the final challenge for her and the other pledges will be to spend the night causing trouble in the mall owned and operated by her father. Once she, the other pledges, and some other tag alongs get themselves inside the mall, they find themselves being stalked by an unknown killer who has locked them in for the night. Kelly and her friends have to keep their composure as they try to survive the machinations of the unseen menace who has a connection to Kelly’s forgotten past. 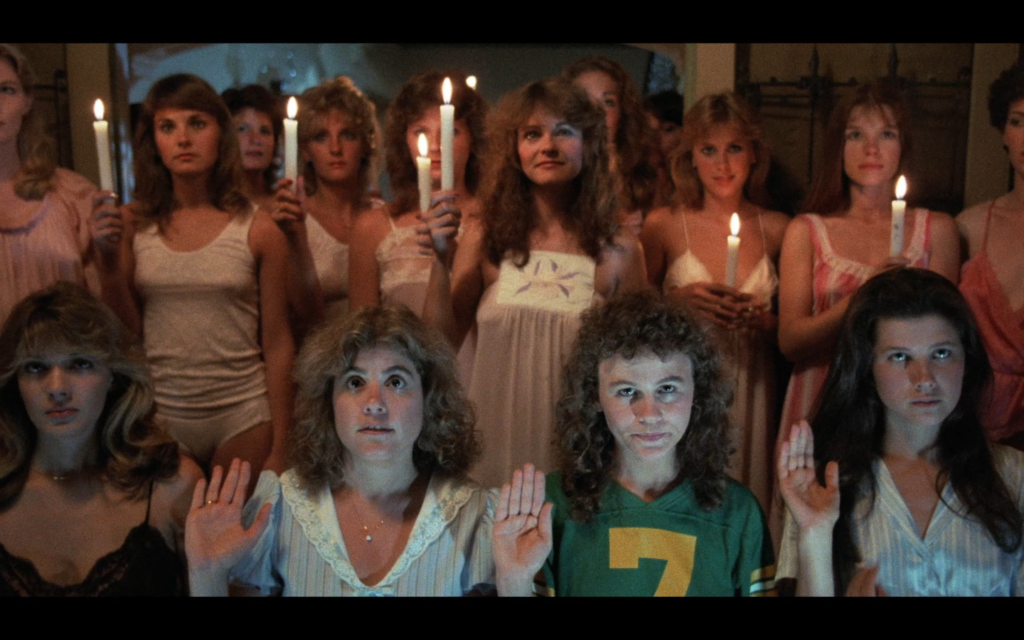 The Invitation arrives on high definition for the first time with a new 2k scan from Arrow, reportedly using the original negative as their source material. Details on the lenses used to shoot the film are not available, but there are some deeply problematic portions in this presentation that I’m not convinced fall on the scan produced by Arrow but rather rest on the film itself. Large portions of the film weave from scene to scene with wild variations in the clarity of shots form all depths, both stationary and in motion. While some shots are intended to be hazy (dream sequences), others are inexcusably out of focus (one in particular is noted in a screenshot below). Shot by George Tirl (of the Kirk Cameron series of Left Behind films fame), The Initiation is a difficult picture to grade the quality of the home video presentation on purely because the cinematography itself is so amateurish. That being said, where the film itself struggles the transfer manages to be as successful as one can expect. Colors are even if slightly hewing towards the blue shades of the palette (I shudder to think what a 35mm print looks like these days considering the theatrical prints were colorized by the deeply problematic Movielab of Hollywood), but this scan does solid work in taking a problematic negative and giving it a strong overall presentation. 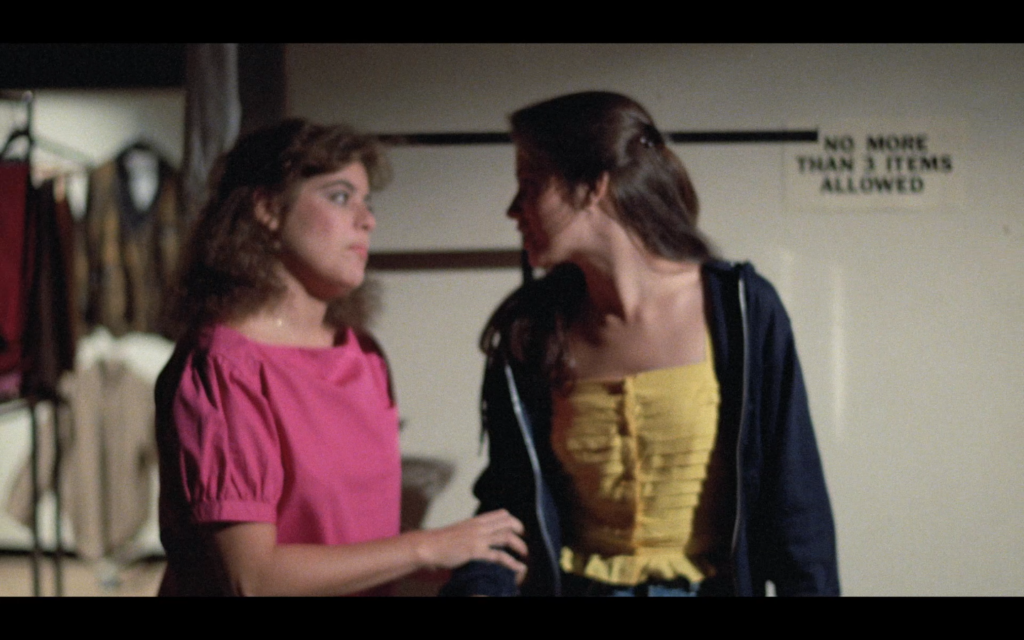 The Initiation was released to theaters with a mono presentation and Arrow has opted to present the film with the same mono mix that originally accompanied it. The levels within the presentation are well balanced so there’s no danger of missing out due to overcompensation or underrepresentation, but any film that relies on musical cues and extended eerie moments would likely benefit from a strong surround mix. The mono track does the job and presents the film as it was originally intended, but you can’t help but wish for more. 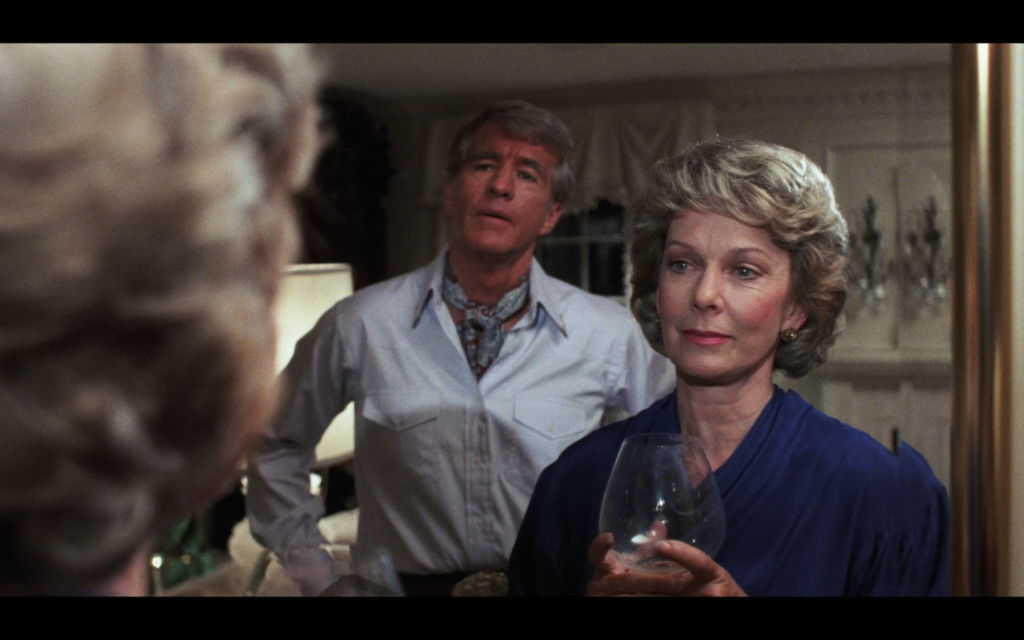 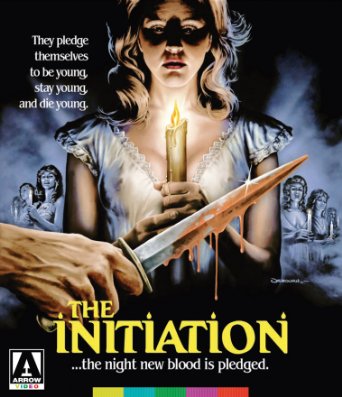 Arrow delivers The Initiation to consumers with a gorgeous commissioned art piece by Justin Osbourn of Slasher Design. Osbourn is one of the most sought after cover artists working in boutique horror at the moment, with his work gracing numerous covers for Scream Factory releases as well as numerous Fright Rags designs. The inverse of the inside cover features the original “candle” artwork used for the film’s theatrical run. Inside the case a single disc is included as well as a booklet featuring an essay discussing the film’s place in the slasher lexicon by James Oliver, this booklet is exclusive to the first pressing of the release. The disc itself is pretty light on features, alongside the original theatrical trailer we’re given interviews with two of the actors and the writer, as well as an audio commentary track by the podcast “The Hysteria Continues”, which focuses exclusively on the slasher subgenre. With limited involvement from cast and crew, folks looking for a more in depth look at the making of the film will be disappointed. From Arrow’s database: 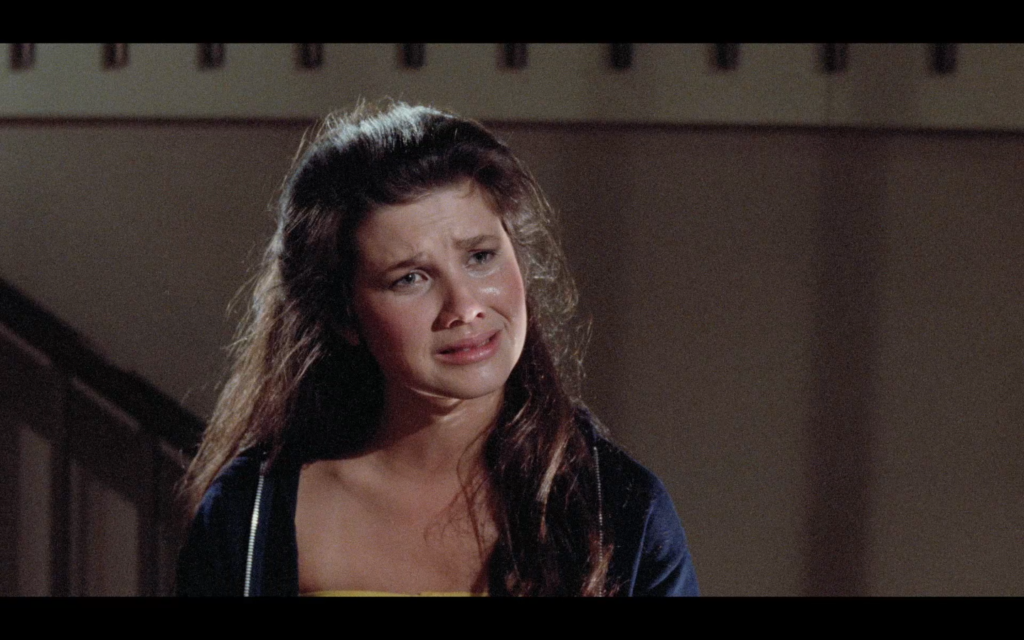 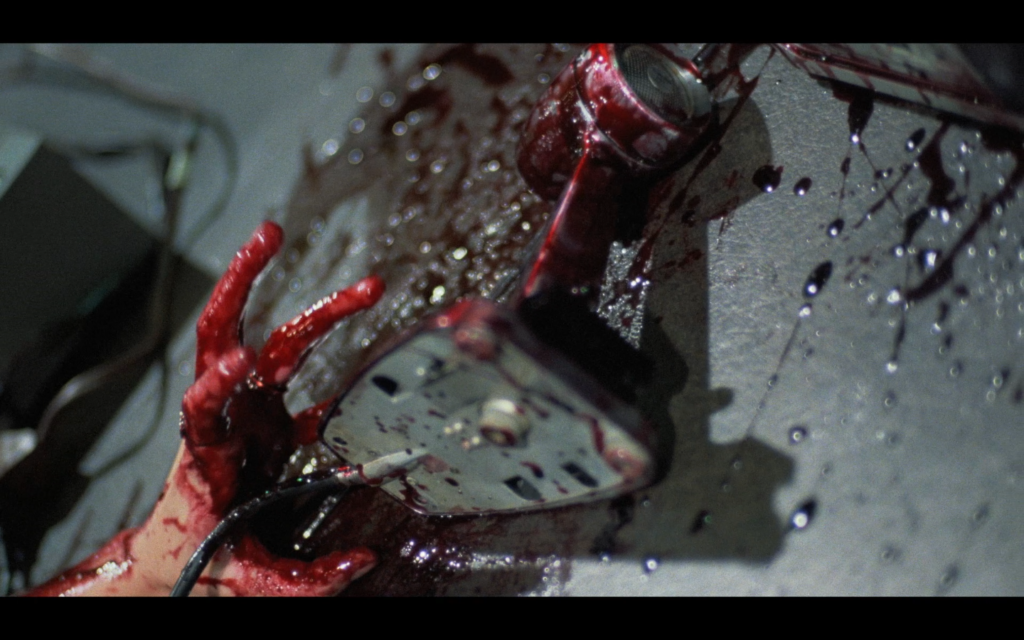 A later entry in the annals of the slasher heyday, The Initiation manages to rise above the morass of most entries in the genre thanks to a somewhat innovative setting and a strong performance from future star Daphne Zuniga, not to mention welcome guest spots from Vera Miles and Clu Galager. Despite its troubled cinematography, The Initiation manages to arrive on home video with an impressive visual presentation and an authentic audio experience that will delight those fans who remember catching this film during its limited theatrical run or on a late night binge of slasher films. While this may not be the most impressive release Arrow has ever put together, it’s far more than one could expect for a film with such a dodgy pedigree. If you’re a fan of slashers, then picking this one up is a no brainer. For horror fans in general I would also offer a firm recommendation. It’s a film that’s been given a new lease on life, take a look.