Heartbreak. That’s the best way to describe Independence Day: Resurgence. A film whose job couldn’t have been easier, and had everything that it possibly could working for it, just falls flat at every single turn. I mean seriously – they got Bill Pullman, Jeff Goldblum, and Judd Hirsch to reprise their original roles. They had a marketing campaign that promised so much, giving glimpses into the 20 years of ID4 universe that we missed out on, and gave us some really cool trailers, and hell, they even found some dumb way to revive Brent Spiner’s classic character, Dr. Okun. It had all of these pieces, and all it really had to do was make it big, make it impressive, and make it fun like they did in 1996. 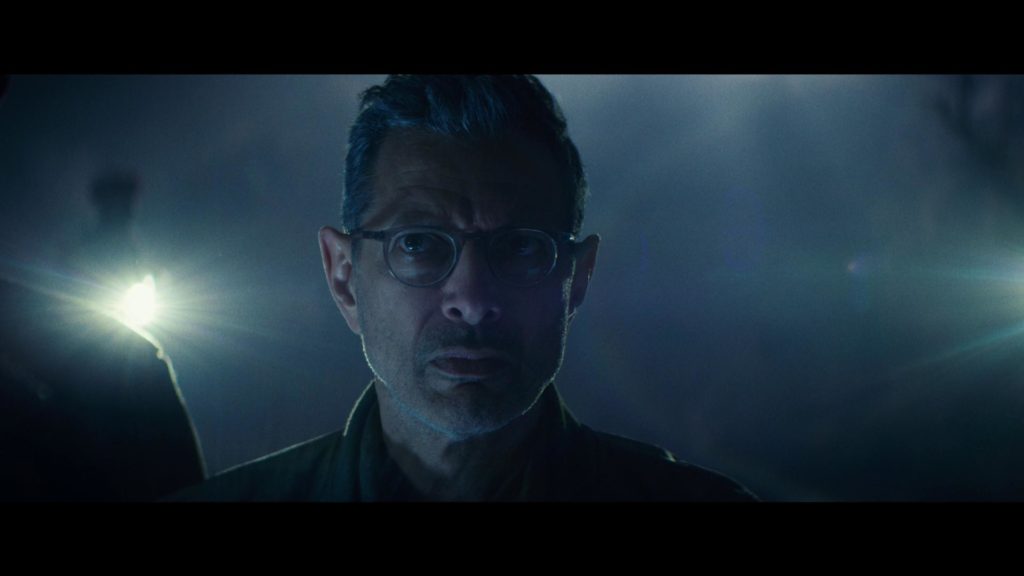 Independence Day: Resurgence follows the next generation of characters who must fill the shoes of the legendary cast of Independence Day. I’d tell you their names, but honestly their characters are so one dimensional that I never really bothered to learn their names. It picks up 20 years after the initial alien invasion, dropping us into a world where the people of Earth have adapted the alien technology into a futuristic society, geared towards stopping the inevitable return of the aliens to finish the job. Suddenly, after laying dormant, alien soldiers start to awaken, and a distress beacon in a fallen alien ship is discovered. Invasion being imminent, they call David Levinson back into action to help lead the defense force as a massive alien mothership shows up and plants itself onto the entire Atlantic ocean, causing massive devastation. A massive war to stop the aliens from destroying Earth once more leads Levinson and his new crew of military friends to an AI, one that could potentially save the galaxy. This of course, leads to a huge, climactic battle, one that will determine the fate of humanity forever. 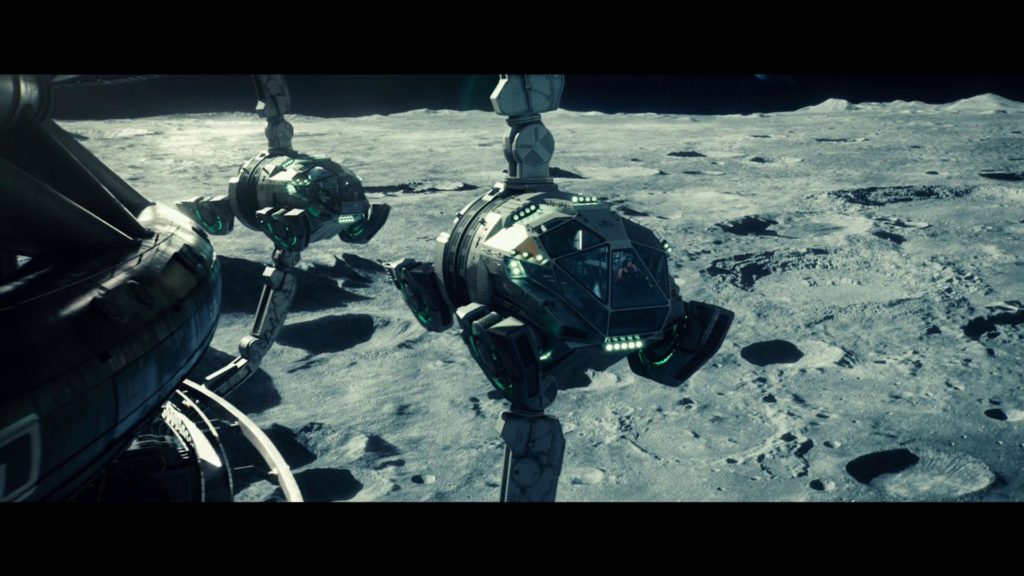 Independence Day is one of my all-time favorite blockbusters, and one that I credit for maintaining my interest in films during my formative years. It hits all the right notes, with incredible, yet slightly hammy performances from a cast including Goldblum, Pullman, Hirsch, and Will Smith. It was funny, intense, and built into an emotionally satisfying climax full of brilliant effects and an immense scale that propelled into legendary status.

Independence Day: Resurgence is two hours of pure torture, one that was such a betrayal to fans of the original film that after taking my mom to see it in theaters, she practically begged me not to grab the home video release. Instead of bringing an A-list cast to the table, we get a new, younger breed of characters played by nobodies, each of which have the personalities and charisma of flattened roadkill. The return of these aliens should have been a thrilling reminder of what made ID4 such a great film, and instead moves along at the speed of slug, introducing so many plot sequences and unfulfilling moments that it just ends up feeling like a hollow, confusing mess of a movie. I guess, considering the track record of director Roland Emmerich and producer Dean Devlin since the release of the original film, it shouldn’t come as much of a surprise, but it doesn’t make it any less painful. 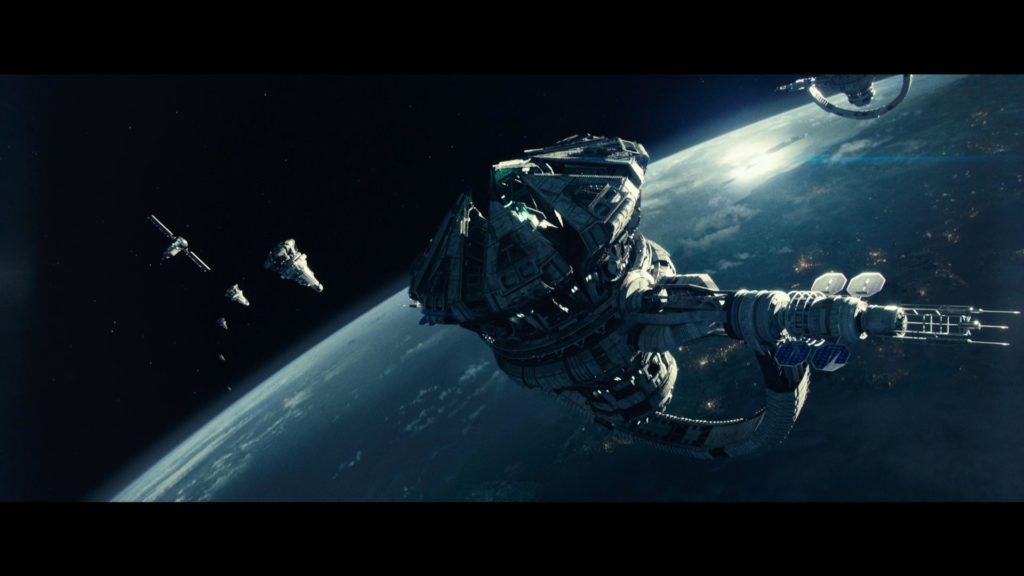 On top of that, the special effects just don’t feel as exciting. After twenty years, space battles and massive spaceships, all rendered in glorious CGI just don’t feel very real, or threatening any more. There’s a scene in which Judd Hirsch’s dad flees towards land against a massive wave, and it not only looks goofy, but it has little weight. The size and the scale of everything just doesn’t carry over across films, leaving Resurgence just another large, unremarkable tentpole blockbuster in an increasingly large pool of unremarkable blockbusters. It feels like just another Avengers style movie, where everyone gets together, either by force or coincidence, in order to defeat a massive, bland villain. This time, it’s an alien queen, but it could have easily have been Godzilla, or the Stay Puft Marshmallow man, and been just as compelling. 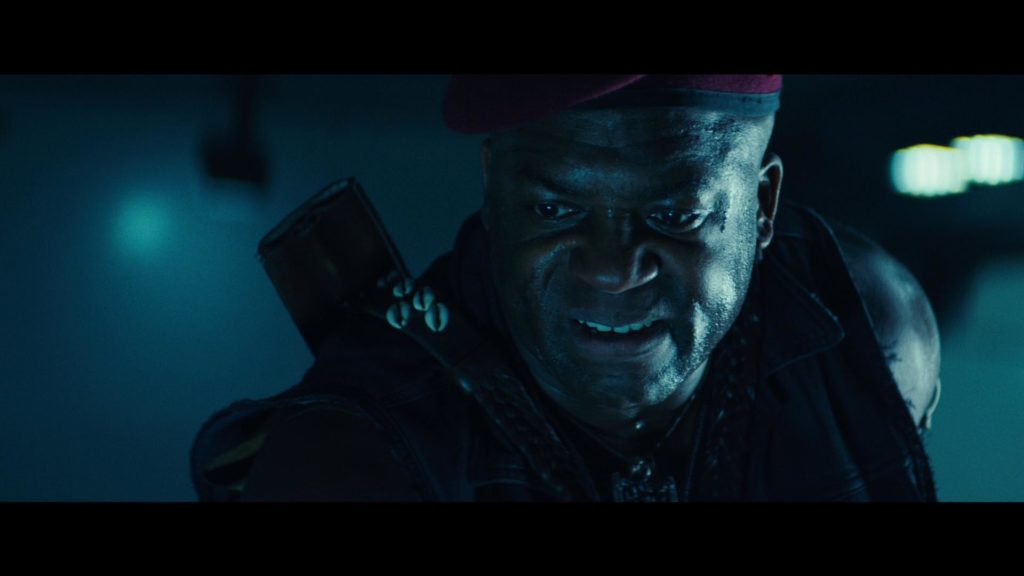 There are parts of Resurgence that feel like there was some serious thought put behind them, such as a band of African military types that have formed a psychotic link to the aliens, and a few goofy scenes such as Julius Levinson driving around a warzone with a bus full of school children, and Dr. Okun exacting glorious vengeance on the aliens that are about to destroy him, but It makes little difference. For each scene that brings back the same kind of fun and excitement that the original film did, we get scenes where important characters from the first film are wasted and new characters make ridiculous decisions that end in their own untimely demise, but these characters are given so little time to be in the film, that I have a hard time caring about any of this. 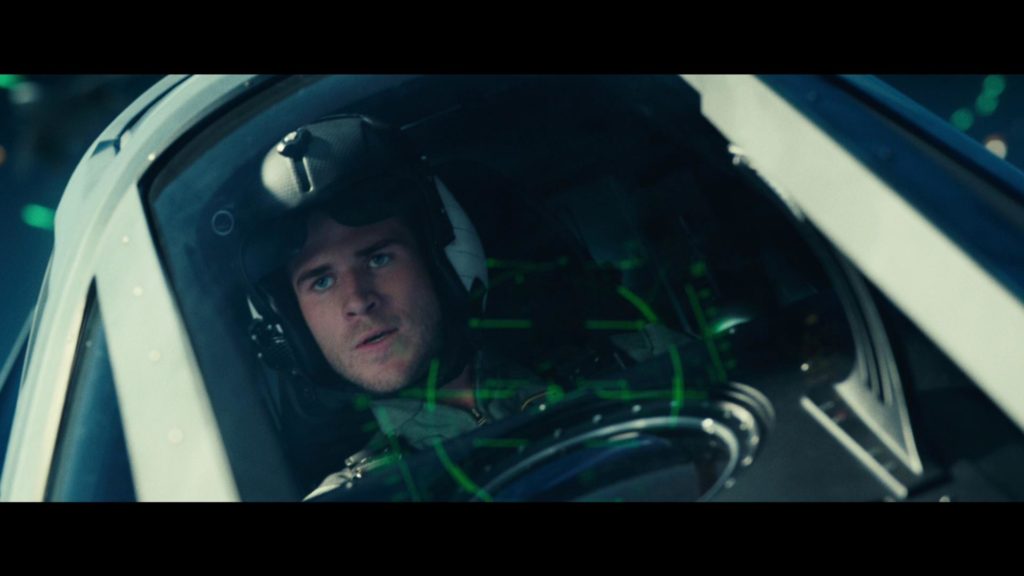 In character as David Levinson, Jeff Goldblum quips that the new alien spacecraft is, “definitely bigger than the last one,” but Independence Day: Resurgence feels like a small, hollow scam of a movie, made to prey on those who loved the first film. It’d be like if Star Wars: The Force Awakens featured a cast of Jar Jar Binks offspring. You’d have a hard sitting through it, and after it was over, you’d wish it was never made. The worst part? It leaves the story open at the end, for a sequel that promises a film that drops the baggage that’s crippled this film, and one that we’ll most likely never get. It’s unclear what went wrong here, but in twenty years, they were somehow unable to have a decent script, likable characters, or appropriate cameos for characters from the previous film. It makes me wish we’d never come back to “urf.”

Independence Day: Resurgence was shot digitally using the Red Epic and Red Weapon Cameras in 4K and 6K resolution modes, using Hawk Scope anamorphic lenses. The film was finished using a combination of 2K and 4K resolutions for different sequences for a final output resolution of 4K, in the 2.35:1 aspect ratios. The film is presented on Blu-ray in 1080p, maintaining the 2.35:1 aspect ratio. 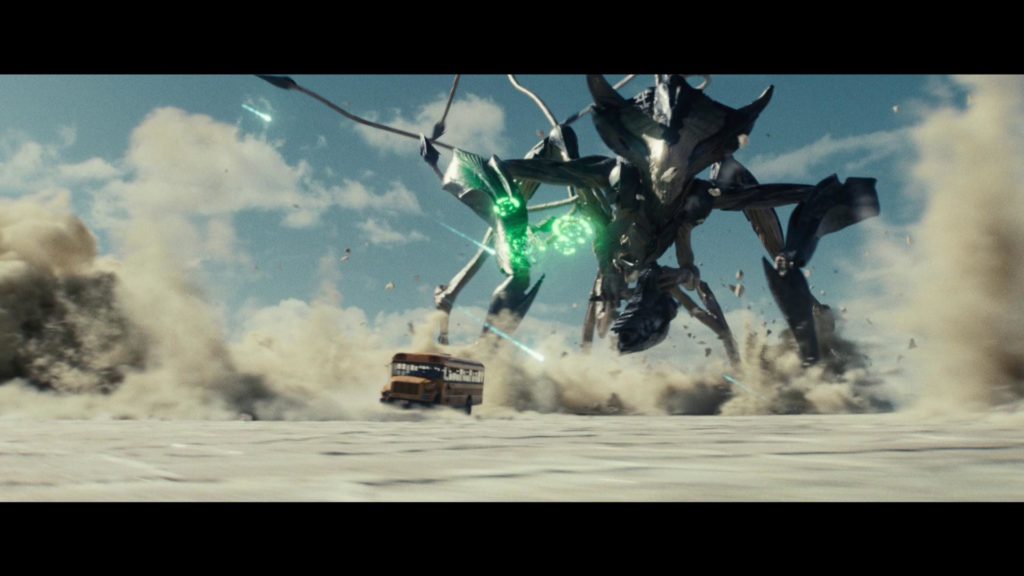 Independence Day: Resurgence is a film filled largely with sequences of CGI destruction. Like, pretty much the entire movie is largely filled with CGI backgrounds, and spaceships, and aliens that are inconsistently sharp. Some of the larger scenes of catastrophe look pretty soft on screen, perhaps exaggerated by the decision to use cheaper anamorphic lenses. Practical photography of actors and landscapes looks sharp and detailed, and color is consistently blue and gray, On top of that, the majority of the image is layered in digital video noise. Resurgence doesn’t look bad by any means, it just doesn’t look very interesting.

Independence Day: Resurgence is presented on home video with a DTS-Master Audio 7.1 surround soundtrack. For review purposes, it was listened to through a 5.1 configuration. 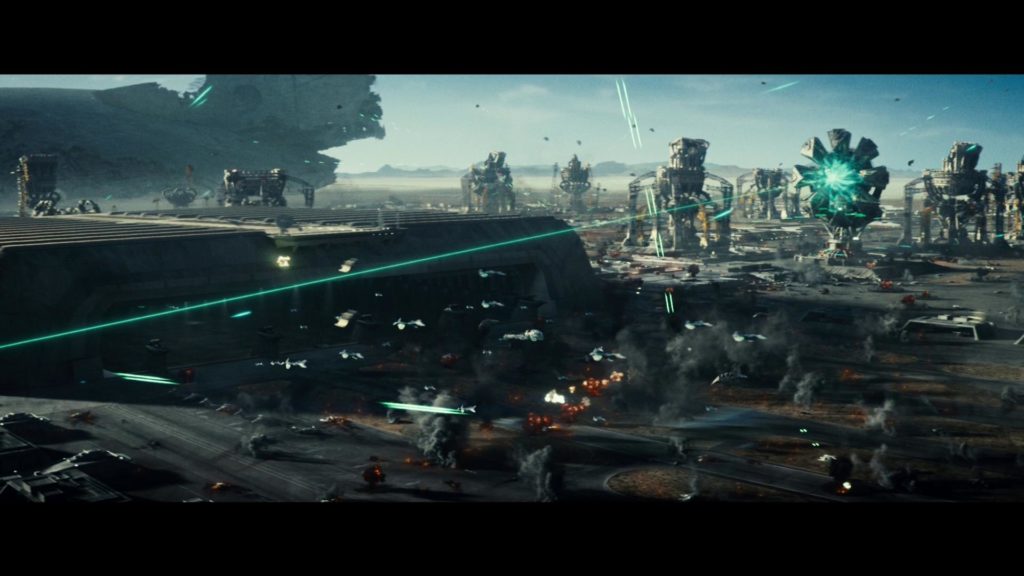 Although the film is a resounding dud, it roars onto home video. Bass is loud and resounding, and explosions and debris fly every which way. Dialogue is locked to the center channel, but comes off with clarity in the middle of all the chaos. The largely forgettable score is well produced throughout the soundstage. Resurgence is one of those films that doesn’t have a lot to say, but knows how to say it with style and energy.

Released to home video by 20th Century Fox Home Entertainment, the Target Exclusive release of Independence Day: Resurgence comes packaged in a lovely digibook, paired with a glossy slipcover. The slipcover matches the artwork of the standard release, with a picture of the massive alien spacecraft looming over the United States on the front, and the pack featuring a shot of the climactic bus chase sequence, along with a paragraph about the film, a list of special features, technical info, and credits. Under the slipcover, we have a lovely, minimal digibook with a front cover featuring the film’s title over a sparse background, and the back a shot from the film of the first alien entering our solar system. Opening the book reveals the Blu-ray disc, and 48 pages taken from a making of book for the film, featuring character biographies, full color pictures, and various pieces of info about the film and concept. After the book, the DVD of film is slotted nicely into the background. Overall, a beautiful release from Fox Home Video. 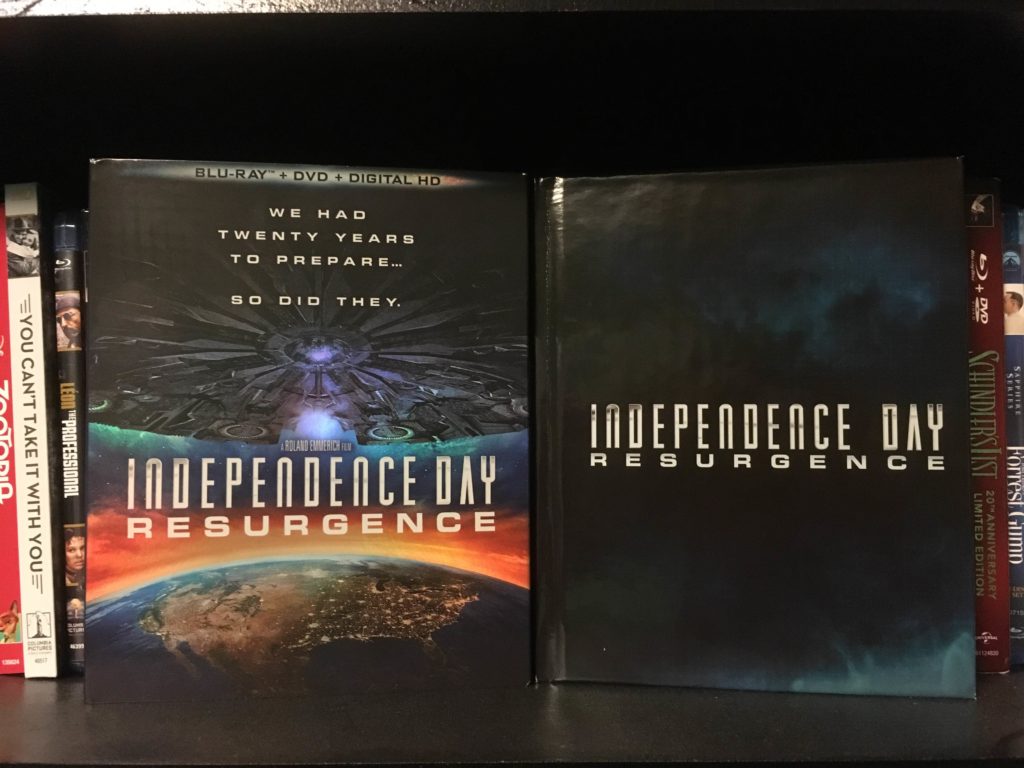 Deleted Scenes – a collection of mostly forgettable deleted scenes, with the option of listening to commentary on each one by Rolland Emmerich

The War of 1996 – a cheesy fake news piece that explains some of what happens after Independence Day, including the death of Will Smith’s character, Captain Hiller 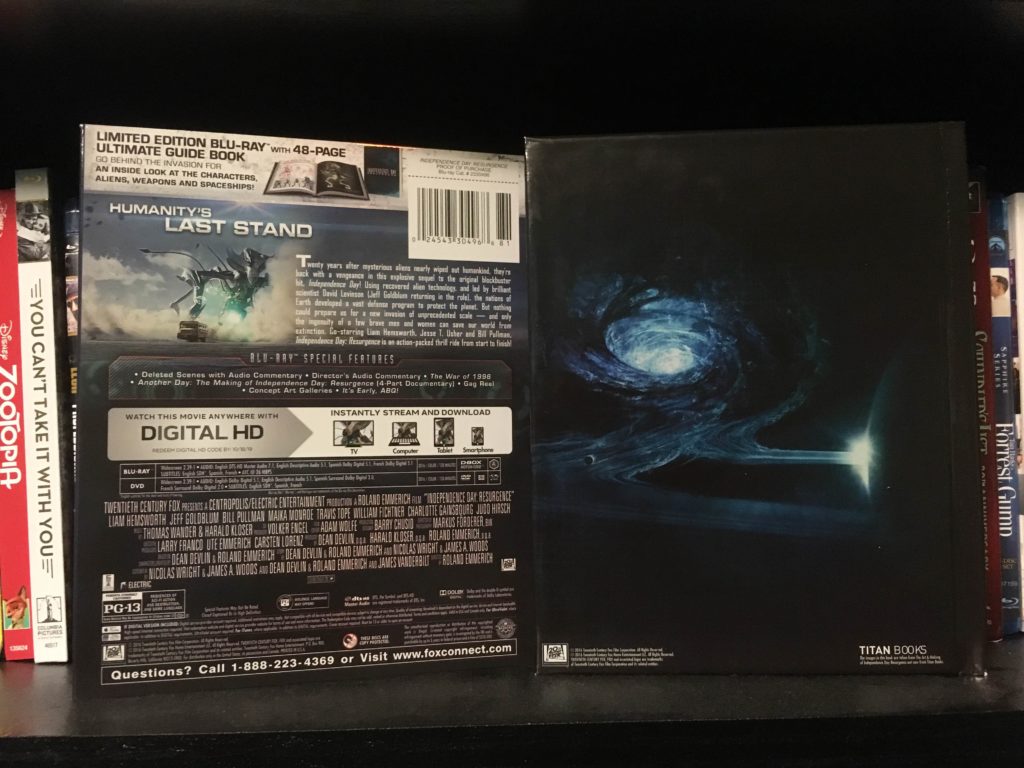 It’s Early! ABQ – a 3 minute fake new interview between the Levinsons, and a local news interviewer from Albuquerque, played by the always amusing Fred Armisen

Another Day: The Making of Independence Day: Resurgence – nearly an hour of material that looks at the new cast, shooting the movie, creating the future society of the movie, and the new aliens 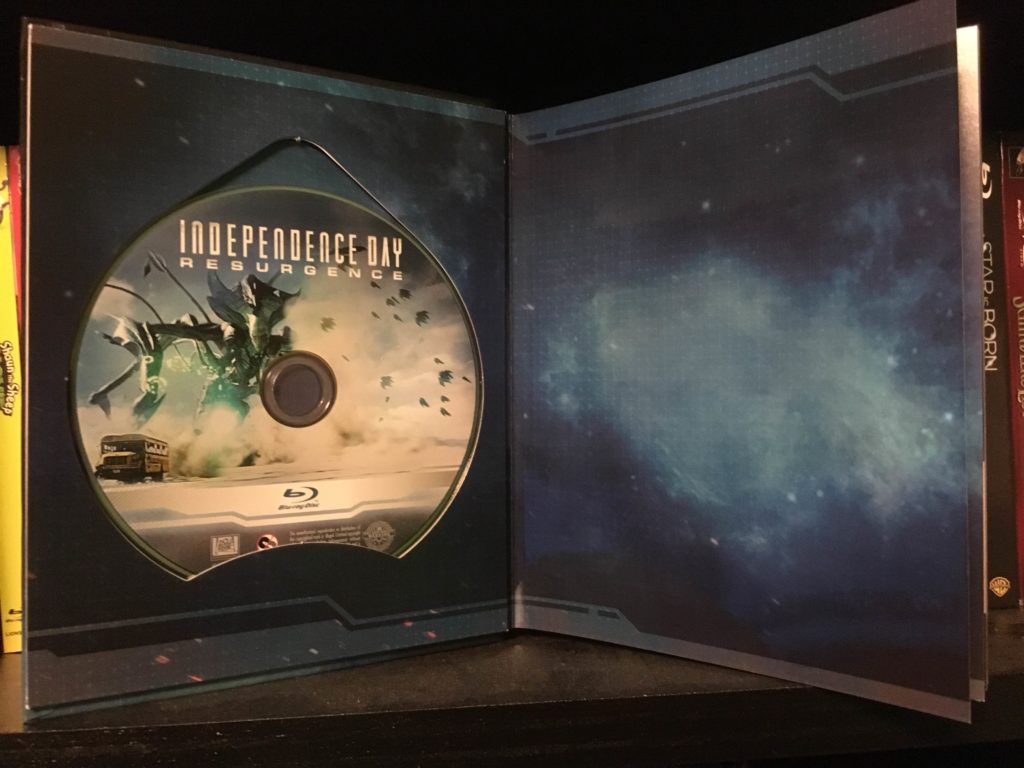 Theatrical Trailers – a collection of 2 theatrical trailers, and 1 TV spot made for the film 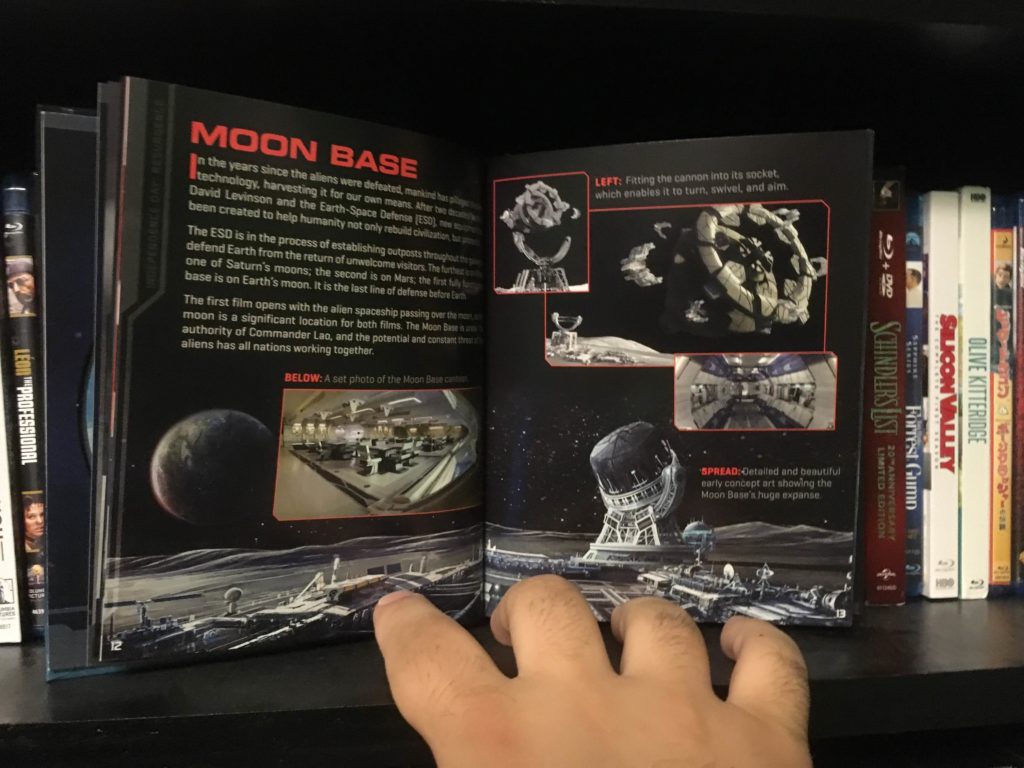 With fantastic packaging, but bland extras that fail to inspire much interest, tread lightly in this area. 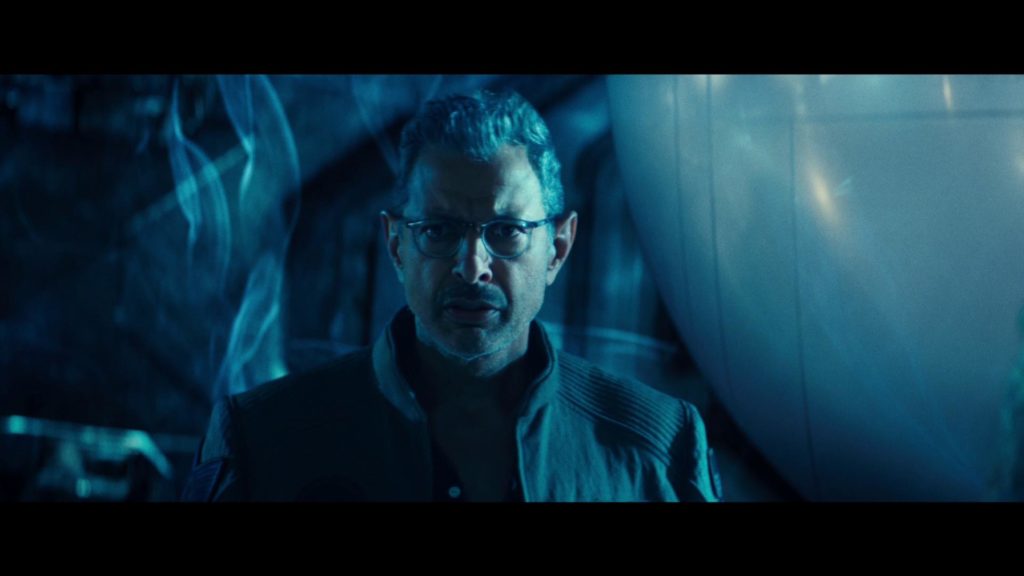 Independence Day: Resurgence is a poor follow up to a 90s classic blockbuster, that fails to recreate or respect anything that made the original film worth watching. Outside of a few good scenes, and the return of David Levinson, the film is full of bland performances, an uninspired script that lacks resolution, and a sense of size and scale that is hampered by its lack of realism due to an overuse of CGI. I could go on and on, but I don’t think you guys have all day. The film is paired with a decent visual transfer, bombastic audio, and the Target Exclusive release has some incredible packaging to sweeten the lack of substantial extras. Honestly, unless you’re a packaging buff, this is one I’d skip.