The Incredible 2-Headed Transplant seeks to answer the question “What would happen if Dr. Frankenstein tried to attach a serial killer’s head onto the body of an intellectually and developmentally disabled man-child?”.

This film is one of those late night cult horror 1970’s movies where the poster gives away the most interesting part of the movie and so mostly the viewer is just waiting for the chaos to occur. Unfortunately this film waits for about one hour to show us and plays the idea so seriously that it frequently takes the fun away. The pacing is pretty glacial and it only occasionally traverses into the “so bad it’s good” territory. Bruce Dern may have been miscast as the seemingly anemic Dr. Girard, who instead of acting like a mad scientist gives a very low key performance. Casey Kasem also stars and basically no one else notable except a cameo from the amazing B movie stuntman Gary Kent and Pat Priest (Marilyn from the Munsters TV show). I think the movie would have best benefited from either embracing the insanity of it’s plot or being a dark psychological study and focus more on the killer.

How many layers of clothes do I need again?

Compared to other films of this era, the Incredible 2-Headed Transplant has a very average transfer. There is detail in some of the close up shots but no one will be fooled into thinking this is a newer movie because of the quality of the picture and the muted color palate. This isn’t the fault of Kino though and I would imagine this the best this movie has ever looked. The very end of the movie has intentional print damage by the director as an artistic choice, but other than that there is only minor indications of wear and scratches. 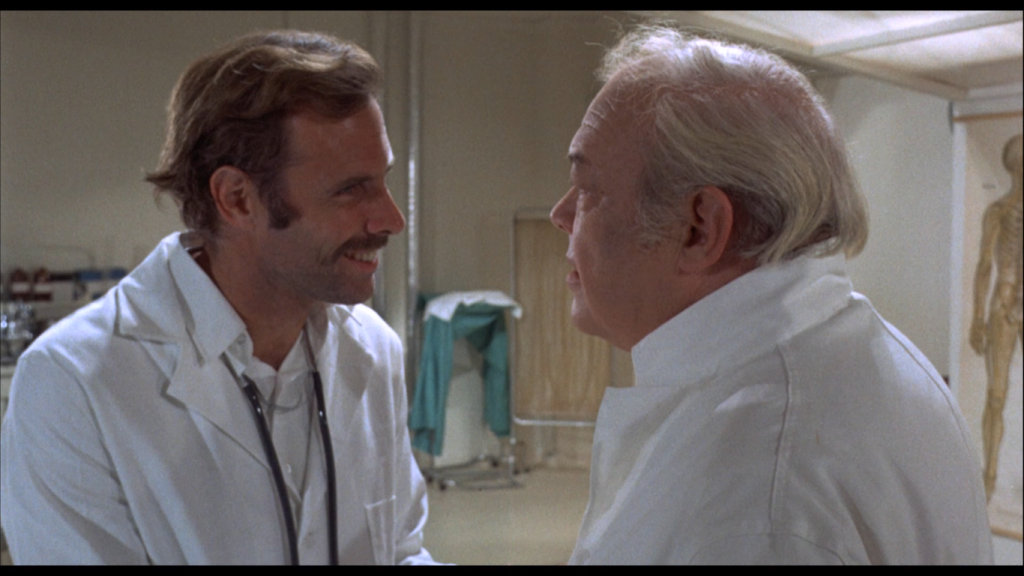 Honest I’m a doctor, now could you please cough?

The sound mix in this is below average. Frequently voices will be so low and mumbled that it is hard to hear what is going on. I imagine this has more to do with the positioning and quality of the microphones in the original filming rather than Kino doing a bad job but it is worth noting. The jazz score is odd and sometimes is quite irritating, but I figure that might be more of a personal preference. If you prefer to watch with subtitles on it is unfortunate that they don’t always synch correctly.

Tell me honestly, does this haircut make me look fat?

The Blu-ray case for this film seems to be a standard case, the center hub is well made and holds the disc firmly in place. This is not an Eco case and has a solid plastic backing for the disc. There are no inserts or advertisements. 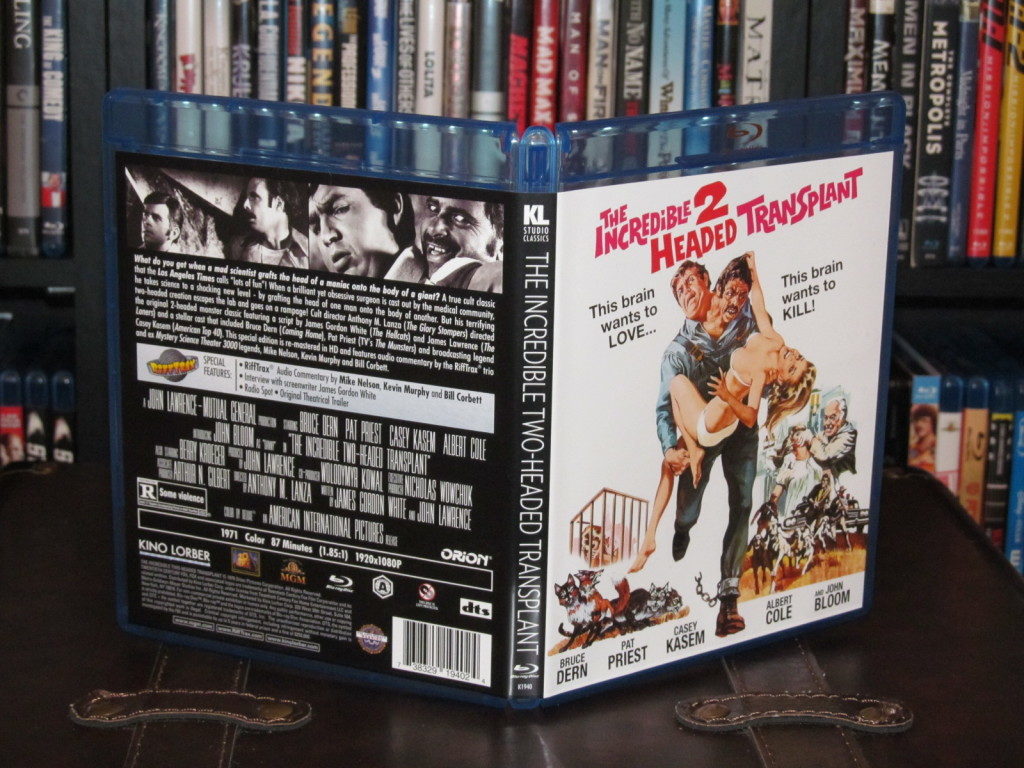 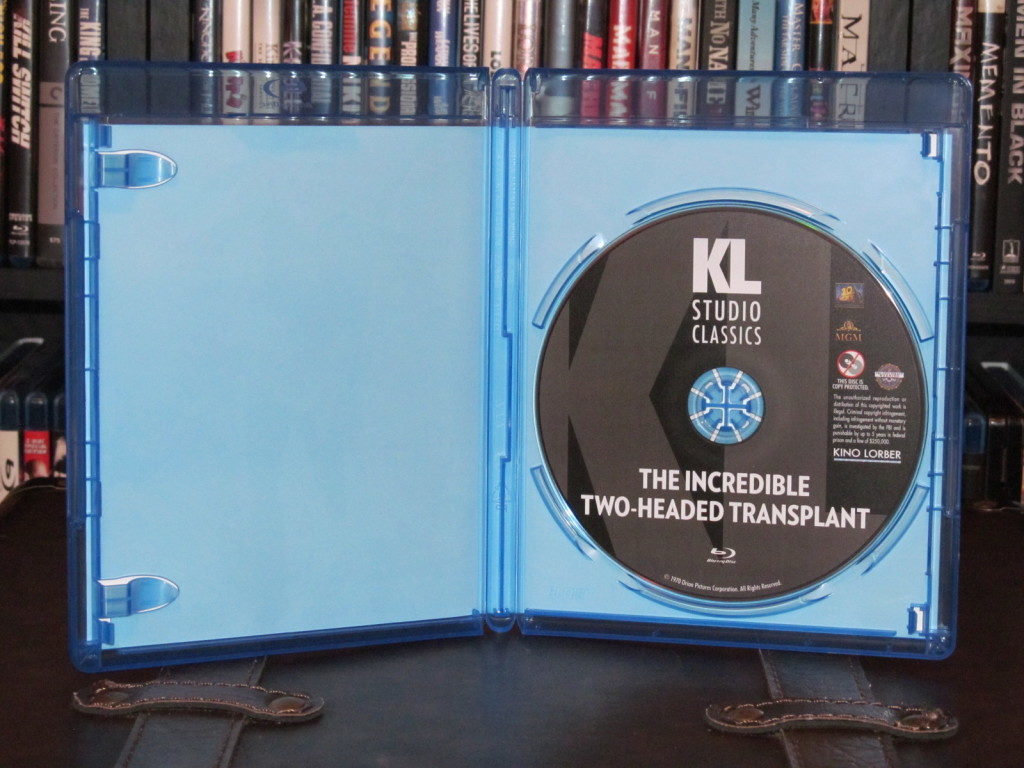 To me this is the only reason to own the Blu-ray as it features a commentary by the guys from Mystery Science Theater 3000 and it is hilarious. In case you aren’t aware they basically make pop culture references and jabs at the movie with voice over to try and make it more entertaining. Some people might be put off with this but I find it immensely funny.

There isn’t a whole lot of information in this interview but he does talk a bit about writing the Incredible 2-Headed Transplant, wanting Vincent Price to be cast and his feelings towards critics. 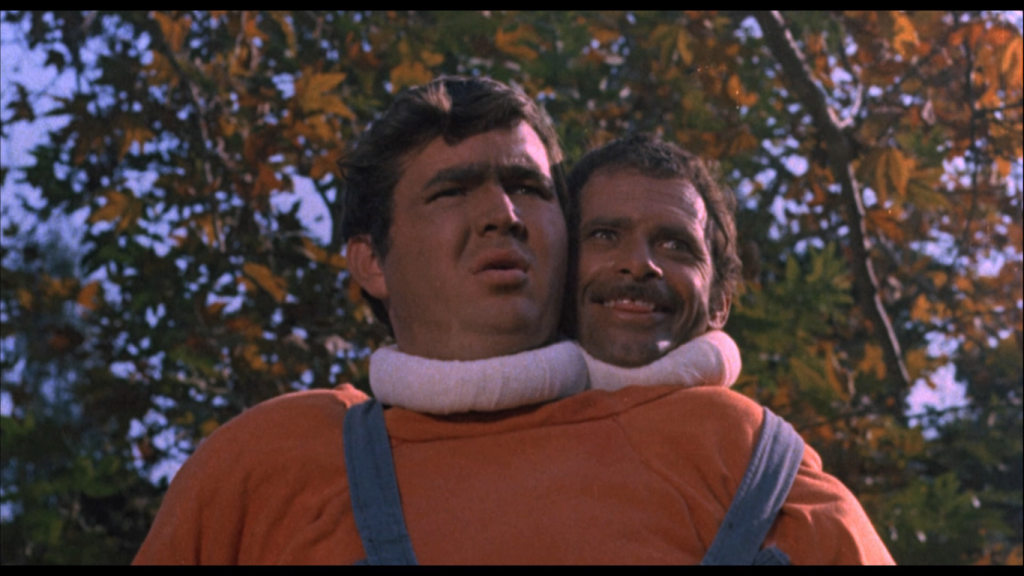 So even with two brains this is all we could come up with?

Hard core cult 70s horror/sci-fi fans might find something here to love but to the average person this just seems like a bad movie with a passable transfer. The Rifftrax commentary makes the movie watchable in my opinion, turning unintentional movie mistakes into an entertaining experience. This is probably only worth a purchase if you have seen it before and really know what you are getting into.