I Still See You is a 2018 American supernatural mystery thriller film that was directed by Scott Speer, from a screenplay that was written by Jason Fuchs. It is based on the novel titled Break My Heart 1000 Times written by Daniel Waters. It stars Bella Thorne, Dermot Mulroney, and Richard Harmon.

Taking place ten years after an apocalyptic event killed millions, the world has been left inhabited by ghosts.

In July 2016, it was announced that Bella Thorne joined the cast of the film, with Scott Speer directing from the screenplay by Jason Fuchs. Paul Brooks will serve as producer of the film, while Scott Niemeyer, Brad Kessel, and Fuchs will serve as executive producers. Gold Circle Films will produce the film. In March 2017, Dermot Mulroney, and Richard Harmon joined the cast. Principal photography began in March 2017. Some parts of the movie were filmed in Winnipeg, Canada at a local school, Daniel McIntyre Collegiate Institute. Some other scenes were also filmed at the Arlington Bridge located in the city. Many parts of the film based in “Jewel City” were filmed in Carman, Manitoba. The film was released on October 12, 2018, by Lionsgate Films.

I was really surprised to see all of the negative feedback that I Still See You had received from some pretty notable critics.  They had noted that the film has an extremely convoluted plot, and the entire experience being painful.  But, on the contrary, I found the movie to be an enjoyable experience.  Sure, the plot line is all over the place, but as long as you are following along with everything, you’ll be able to find some satisfaction in the overall experience.  Some of the major peaks in the story fell in line with the premise really well, and the performances from the cast members were really well executed and they helped with making everything flow really well.  Sure, it’s not a cinematic achievement at all; however, my wife and I both really enjoyed it for what it had to offer and are curious to see if there’s going to be any more built from this storyline.

Overall, the visual presentation that’s offered with the Blu-ray release of I Still See You looks great on any standard high-definition television.  The crisp visuals that accompany the lingering effects of the post-apocalyptic world really helped with setting not only the environment, but the entire tone of the movie.  The CGI that was used for the supernatural elements blended into the movie really well, allowing for them to really feel as if they were happening, and they didn’t look as if they were over done by any means.

Packaged with an English DTS-HD Master Audio 5.1 mix, the Blu-ray release of I Still See You really packs a punch as it rips through your average home theater system.  While it’s not as immersive as it could have been, the power that comes through the front and rear channels really help make up for the lack of use of the surround channels.  The transitions from channel to channel were effortless and really helped with the overall immersion of the experience, and the dialogue was spoken cleanly enough and made sure that the characters could be heard without any kind of need for changing the volume levels.

The Blu-ray release of I Still See You comes packaged in your standard single-disc Blu-ray amaray case.  Within that case is the standard Blu-ray copy of the movie, the disc featuring a piece of artwork that’s related to the movie and completely different from that of the case art.  There are no DVD copies of the movie included with this release; but, there is a digital copy redemption pamphlet that’s been included for the various streaming platforms as well as a slipcover that’s been made available during the original pressing of the release that features the same artwork that’s been made available on the case. 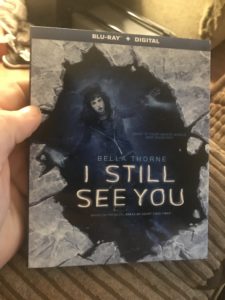 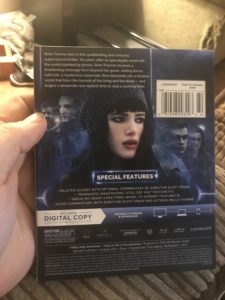 While the number of additional features included on this release of I Still See You are limited to just four, the content that lies within is pretty comprehensive and not only shares some insight into the storyline, but offers a nice look into the work that went into making this movie.  Included with this release is:

Overall, I was pleasantly surprised with I Still See You.  Especially after seeing how much hate this movie had gotten from critics.  Sure, the storyline is a little jumbled, and might feel as if it strays from its core, but as long as you are paying attention, you won’t have any issues following along.  The visual and audio presentation that’s offered with this release were nicely executed and effectively made the experience worthwhile and problem free.  The special features that are included are considerably comprehensive and offer a nice look at all aspects of this movie and release.  If you’re considering this release for your collection, I’d definitely recommend checking it out.  I Still See You is available on Blu-ray and DVD today.