The first Hunger Games movie released back in 2012 and I remember not being that impressed. The movie as a whole was not really the kind of movie I was interested in and I was convinced that it was just another teen franchise trying to get young viewers engaged into seeing mediocre films,another twilight if you will.  What I didn’t know about the franchise is that it was based on the best selling book series nor did I know what kind of an actress Jennifer Lawrence would become.  As it were later on that year Silver Linings Playbook came out and the world was suddenly aware of Jennifer Lawrence in a very real way. 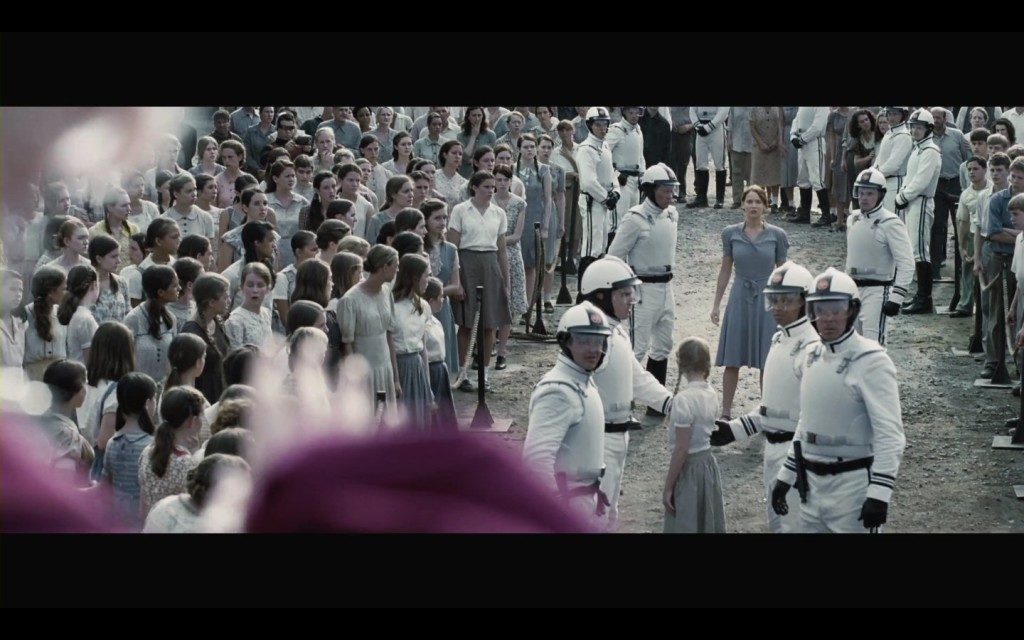 This is where it all began, four years ago we are introduced to a world ravished by tyranny begging for change, begging for a hero to step up and fight.  Our story follows a young girl named Katniss a resident of District 12 doing everything she can to survive.  When reaping day is upon them the unthinkable happens her little sister Prim is chosen to participate in the 74th Annual Hunger Games.  Katniss is left with no choice but to volunteer as tribute for her district in order to save her young sister’s life. Doing everything she can to stay alive she creates a romance for the audience with her co tribute Peeta Mellark in order to keep the world rooting for them and helping them stay alive.  As the movie progresses Lawrence has some real chances to come to life as an actress and does her part to carry the story along. 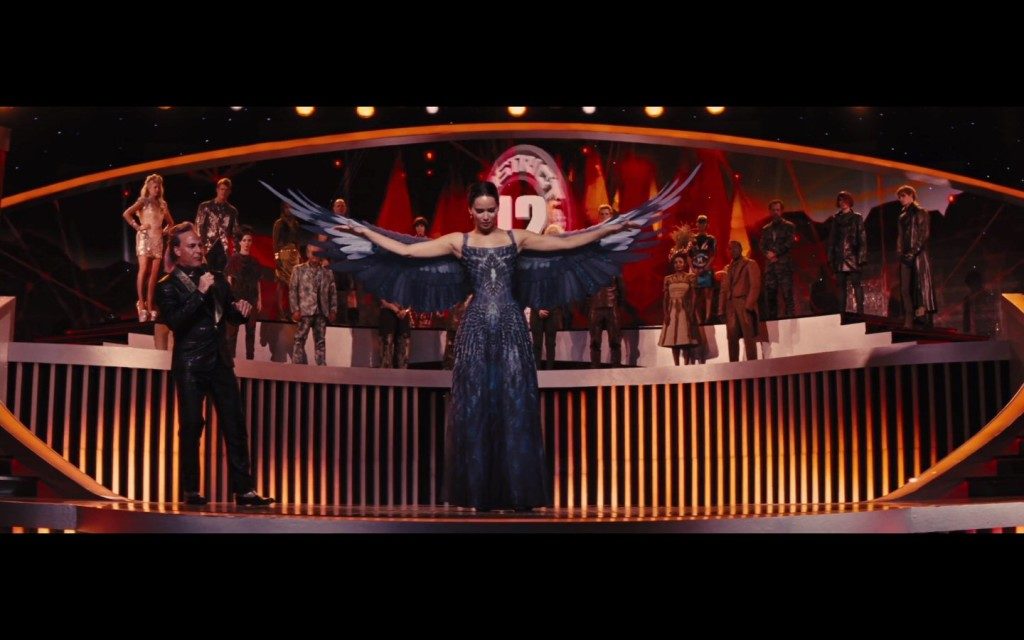 The games are over but the fight is just beginning for Peeta and Katniss as the go around to each district on their victory tour.  Finding it harder and harder to stay silenced to the atrocities taking place in Panem.  It becomes very apparent that the games are never truly over as it seems Katniss’ defiant actions have left both President Snow and the districts with the impression that she stands for something bigger altogether.  Eager to avoid a war Katniss and Peeta do everything they can to appease Snow while trying to keep their conscience clean.  The challenges are just beginning as Peeta and Katniss find themselves picked to participate in the 75th Hunger games also known as the Quarter Quell.

After the shocking events of the Quarter Quell Katniss finds herself in District 13, long assumed to be gone, and Peeta is missing.  She finds that she has become a symbol of hope the mockingjay that the rebellion has needed to unite the districts against the capitol.  Katniss struggles to find her voice as the Mockingjay and her place in the uprising. She comes to the decision that she must do both on her own terms.  When she travels to, the now destroyed, District 12 she witnesses the suffering her home has endured. This gives her the will to fight and leaves filming propaganda films behind. One thing needs to be said that this was one of her first roles after winning her oscar and in my opinion it shows.  She tends to overreact and over perform some of the more trivial scenes. 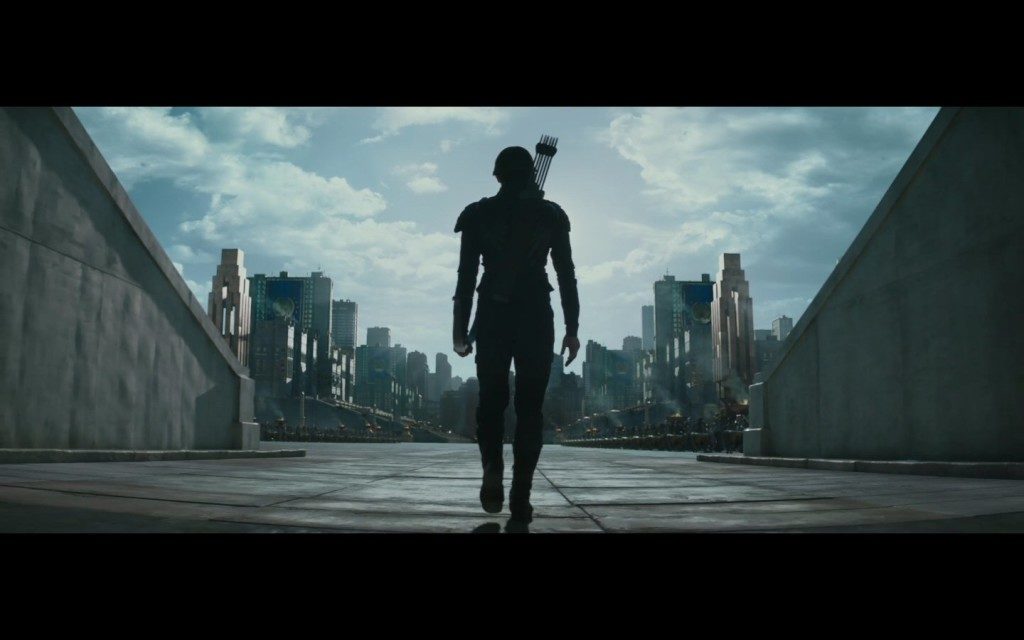 The epic conclusion to the four part series does not disappoint, full of action and surprising twists and turns Katniss finds herself smack dab in the middle of deception and war.  Making her way to the capitol to kill Snow she and her squad find danger at every turn and struggle to make it out alive.  This finale includes some edge of your seat level action and keeps you guessing just how this war will end.  Maybe the best performances are delivered from everyone of the returning cast members and some memorable performances from some new ones.

The overall audio from disc to disc maintains good quality and stays consistent from one movie to the next as I watched them sequentially.  The only real issue I noticed was when going from Mockingjay Part 1 to Part 2 the volume needs changed dramatically I had to turn it way up to accommodate the audio in the final movie and then back down when the action started up.  This was a bit annoying however I imagine if you didn’t watch them sequentially over a two day span like I did, you would not really notice this much.

The transfer of these films to Blu-ray is amazing.  These movies do very well in high definition and each movie has some different characteristics that do nicely to be highlighted in this format.  Even the first movie, which is my least favorite, does look beautiful on Blu-ray. The colors pop off the screen, the resolution and picture clarity looks near perfect, and there are no issues with this transfer at all. Bravo to Liosngate for this release.

I have to admit I have been waiting for this set to release for some time now.  Not because I am a huge fan, however When the movies first starting releasing I made the decision to forgo buying any of the individual movies and instead buying the inevitable box set that would release some day in all its glory.  When I make a decision like that it does take some will power.  So the real question is was it worth it.  The short answer is is yes.  The overall quality of the box set is great.  The outer shell is made of very durable cardboard and unlike most box sets this one should endure heavy usage.  This set was well worth the wait.  The set comes in a nice sturdy box and the the insert slides out from the bottom to reveal some very nice artwork featured on both sides.  The set includes all four films, and six discs.  Every film comes with special features and the first and last film come with a second disc for the special features. 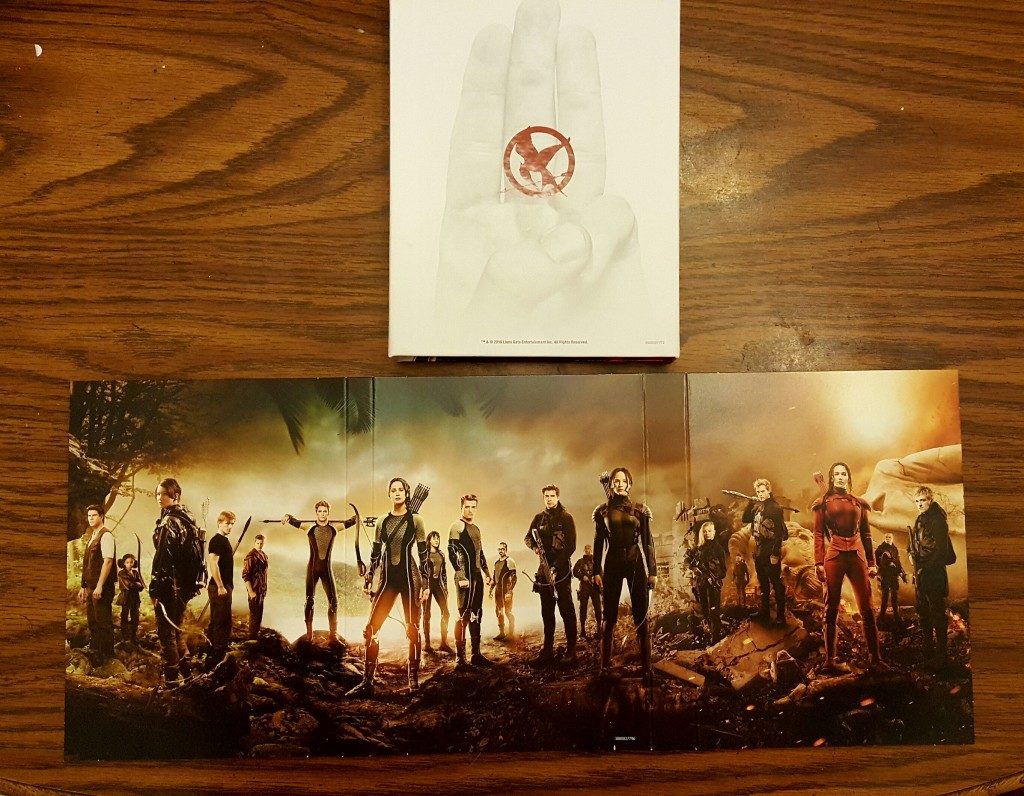 These movies have such a wonderful and rich story to them.  The acting only gets better with each one and as the story progresses we see ourselves in the different characters. The enormous universe and underlying sub plots are well written and create an atmosphere where most of the time we do not see where the story is going. The boxset is beautiful and pays a wonderful “tribute” to the story as a whole.  I highly recommend this edition it comes with a boatload of features and will stay in good condition for some time to come. You can purchase this edition HERE.