Hook is a 1991 American fantasy adventure film that was directed by Steven Spielberg and written by James V. Hart and Malia Scotch Marmo. It stars Robin Williams as Peter Banning/Peter Pan, Dustin Hoffman as Captain Hook, Julia Roberts as Tinker Bell, Bob Hoskins as Smee, Maggie Smith as Wendy, and Caroline Korsmo as Jack Banning. It acts as a sequel to J. M. Barrie’s 1911 novel titled Peter and Wendy focusing on an adult Peter Pan who has forgotten all about his childhood. In his new life, he is known as Peter Banning, a successful but unimaginative and workaholic corporate lawyer with a wife (Wendy’s granddaughter) and two children. However, when Captain Hook, the enemy of his past, kidnaps his children, he returns to Neverland in order to save them. Along the journey, he reclaims the memories of his past and becomes a better person.

Spielberg began developing the film in the early 1980s with Walt Disney Productions and Paramount Pictures, which would have followed the storyline seen in the 1924 silent film and 1953 animated film. It entered pre-production in 1985, but Spielberg abandoned the project. James V. Hart developed the script with director Nick Castle and TriStar Pictures before Spielberg decided to direct in 1989. It was shot almost entirely on sound stages at Sony Pictures Studios in Culver City, California. It has received mixed reviews from critics, and while it was a commercial success, its box office take was lower than expected. It was nominated in five categories at the 64th Academy Awards. It also spawned merchandise, including video games, action figures, and comic book adaptations. 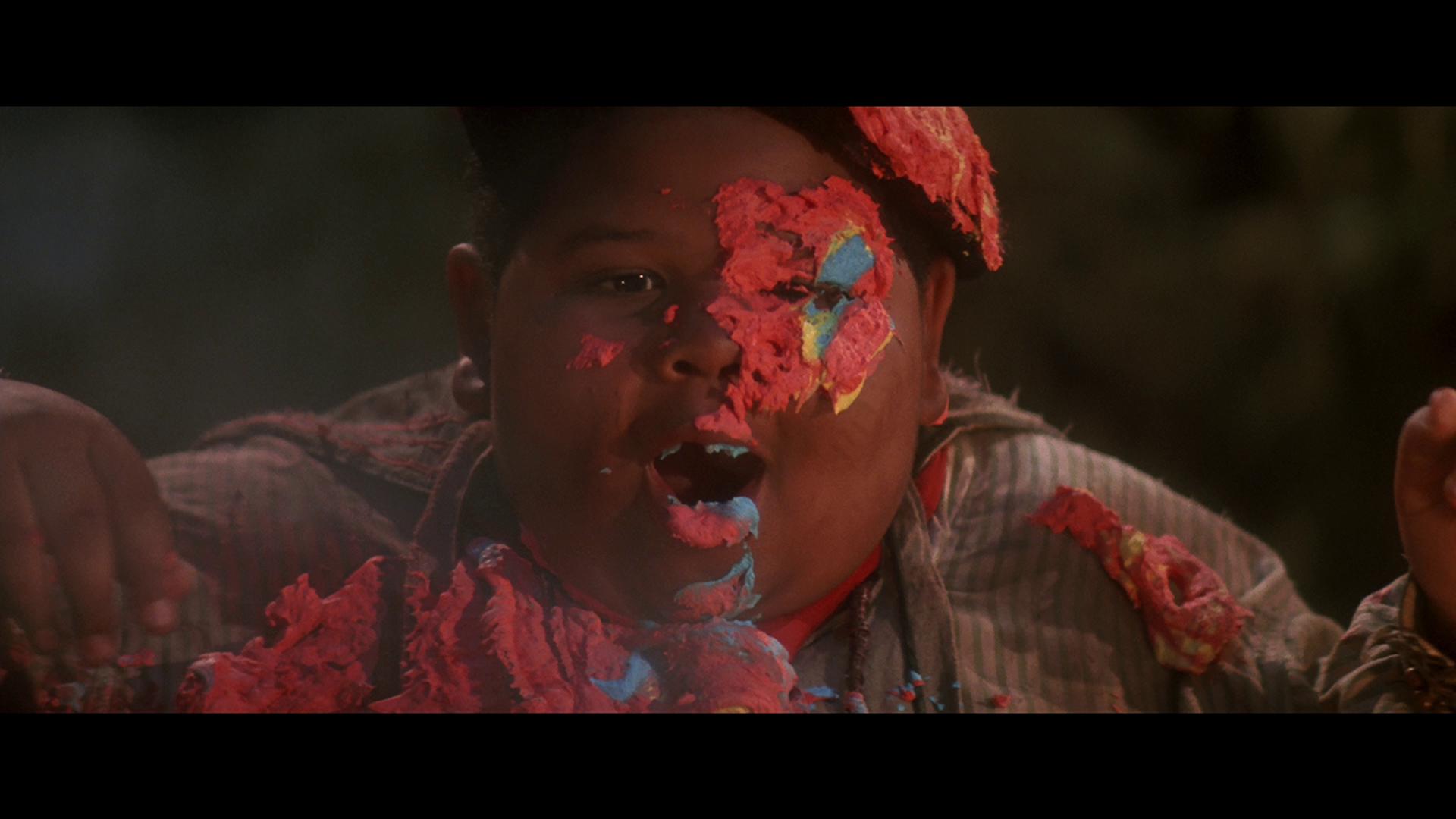 Hook is a movie that a lot of us grew up with. Maybe it’s the nostalgia that comes along with it, but I personally feel that this movie got way too much hate, and is one of the more monumental experiences that the 90s had to offer. Taking a completely different spin on the tale of Peter Pan, it was something that felt extremely unique to a lot of us, and gives its viewers an extremely in-depth opportunity to dive into their imaginations and childhood as Robin Williams tries to defeat Captain Hook. Plus, I mean, it’s Robin Williams. 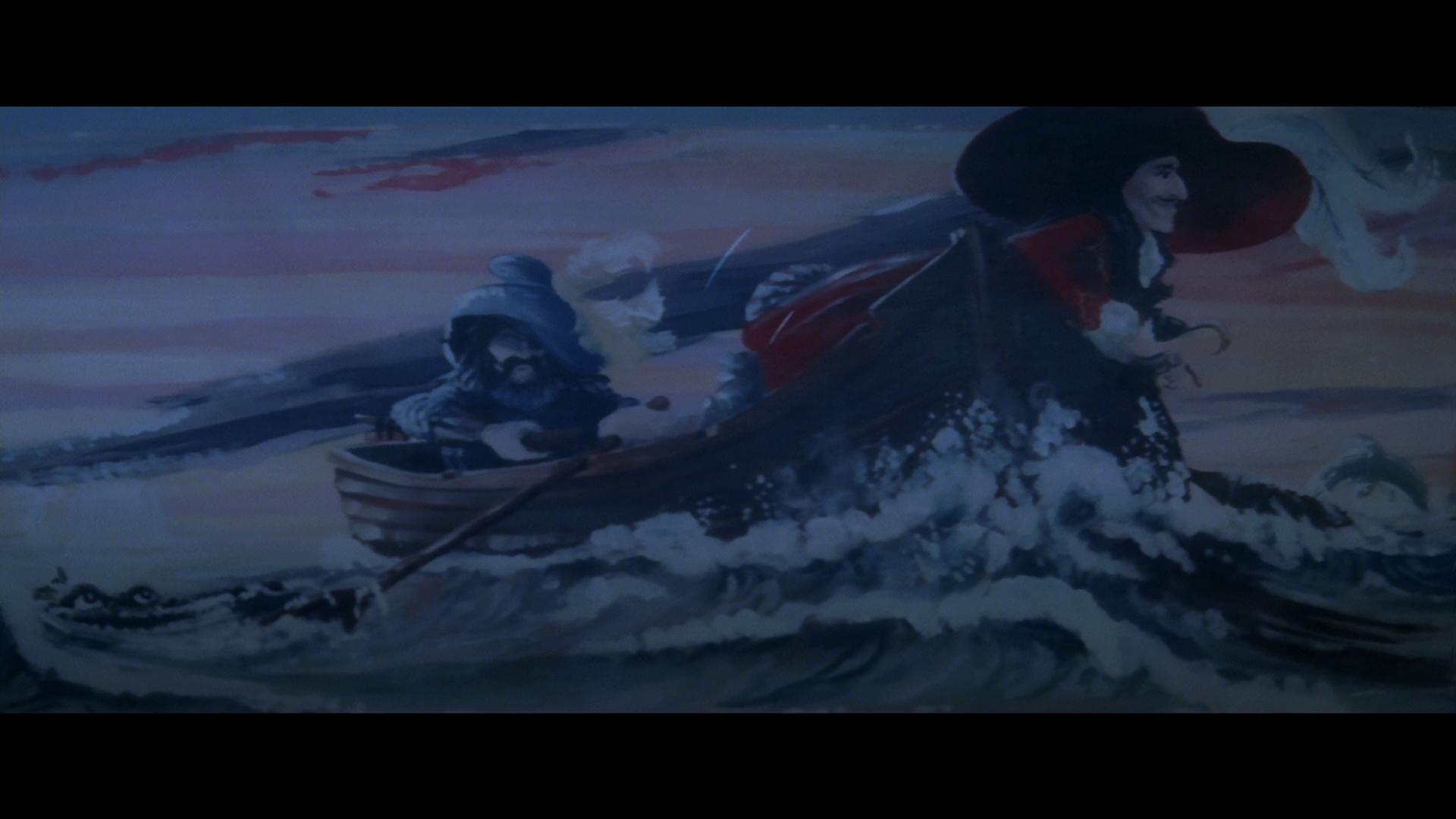 Holy cow, Hook on 4K UHD looks absolutely amazing. The picture quality of this release is one that is noteworthy enough that it allows for this release to be a feature piece in anyone’s 4K collection. The overall utilization of HDR gives viewers a significantly more vivid color palette where this movie simply shines. If I were to pick a sequence that stood out better than the others, I would personally have to go with those that featured an overlook of the ship as it is sailing on the waters. 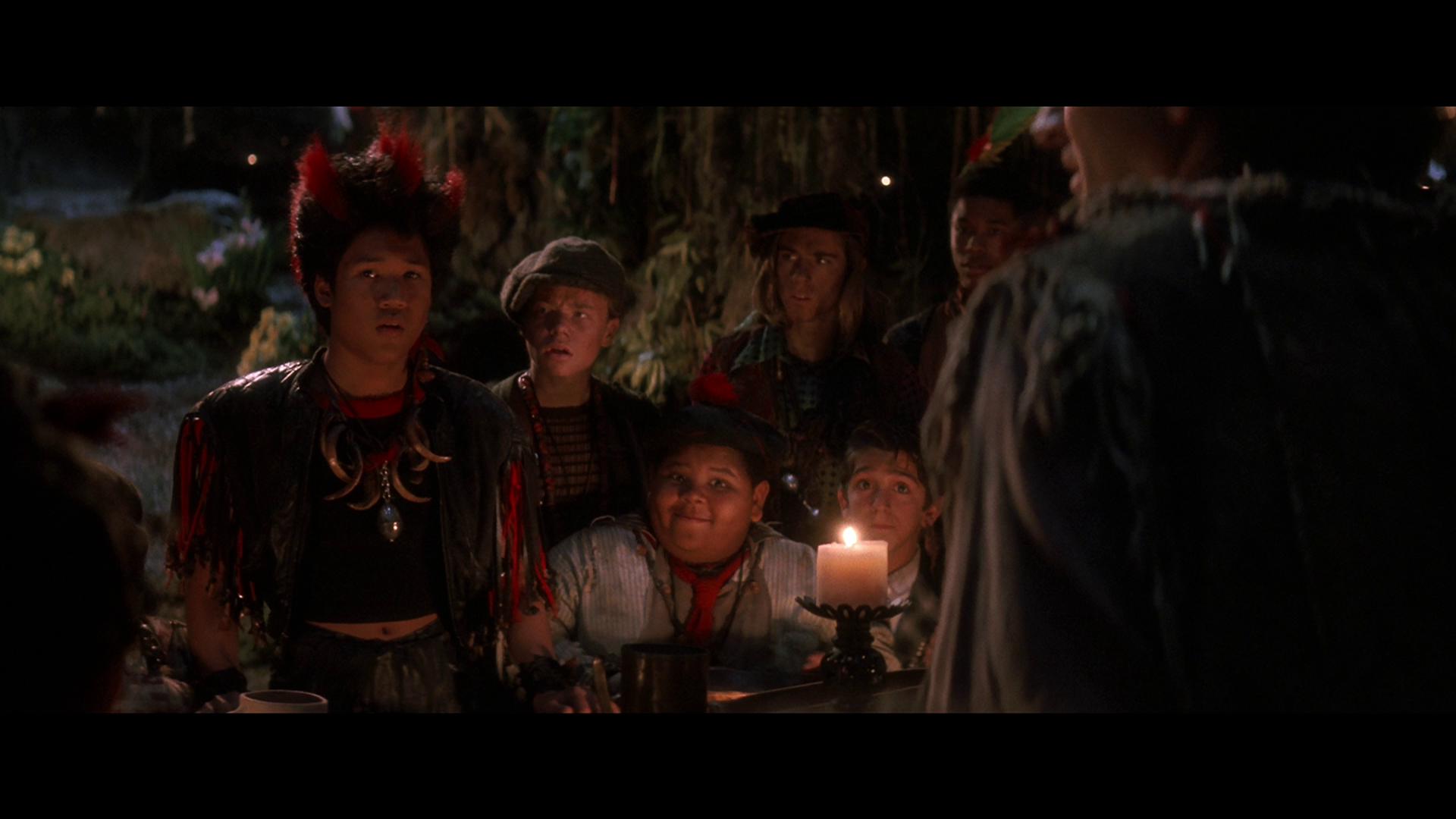 Packaged with an all new remastered Dolby Atmos audio track, the 4K UHD release of Hook gives its viewers that are able to make use of the technology an all out immersive experience. With its cleaned up track, the elemental aspects to the track are aware of the dialogue, ensuring that the characters are heard without any kind of interruption. The transitions from channel to channel were significantly smoother than they were in previous releases, ensuring that it feels like you are right there in the middle of everything.

The 4K UHD release of Hook comes packaged in your standard two-disc 4K UHD amaray case. Within that case is the standard UHD copy of the movie as well as the standard Blu-ray copy. Neither of the discs feature any artwork that’s related to the movie outside of the standard release text and a solid black background on the UHD, and blue for the Blu-ray. There is also a digital copy redemption pamphlet for the various streaming platforms as well as a slipcover that’s been included in the original pressing of the release that features the same artwork that’s been included on the case. 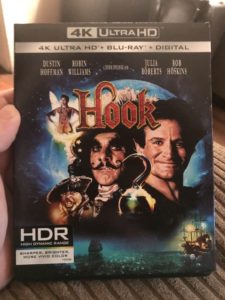 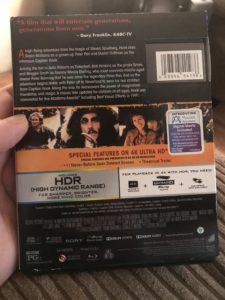 There are only a handful of supplemental features included on the 4K UHD copy of Hook.  The features, while what was included were a nice touch, I would have loved to have seen more in terms of behind the scenes content.  The content included do offer some further insight into the storyline; however, there are no looks into the production work that went into the film.  Included with this release is: 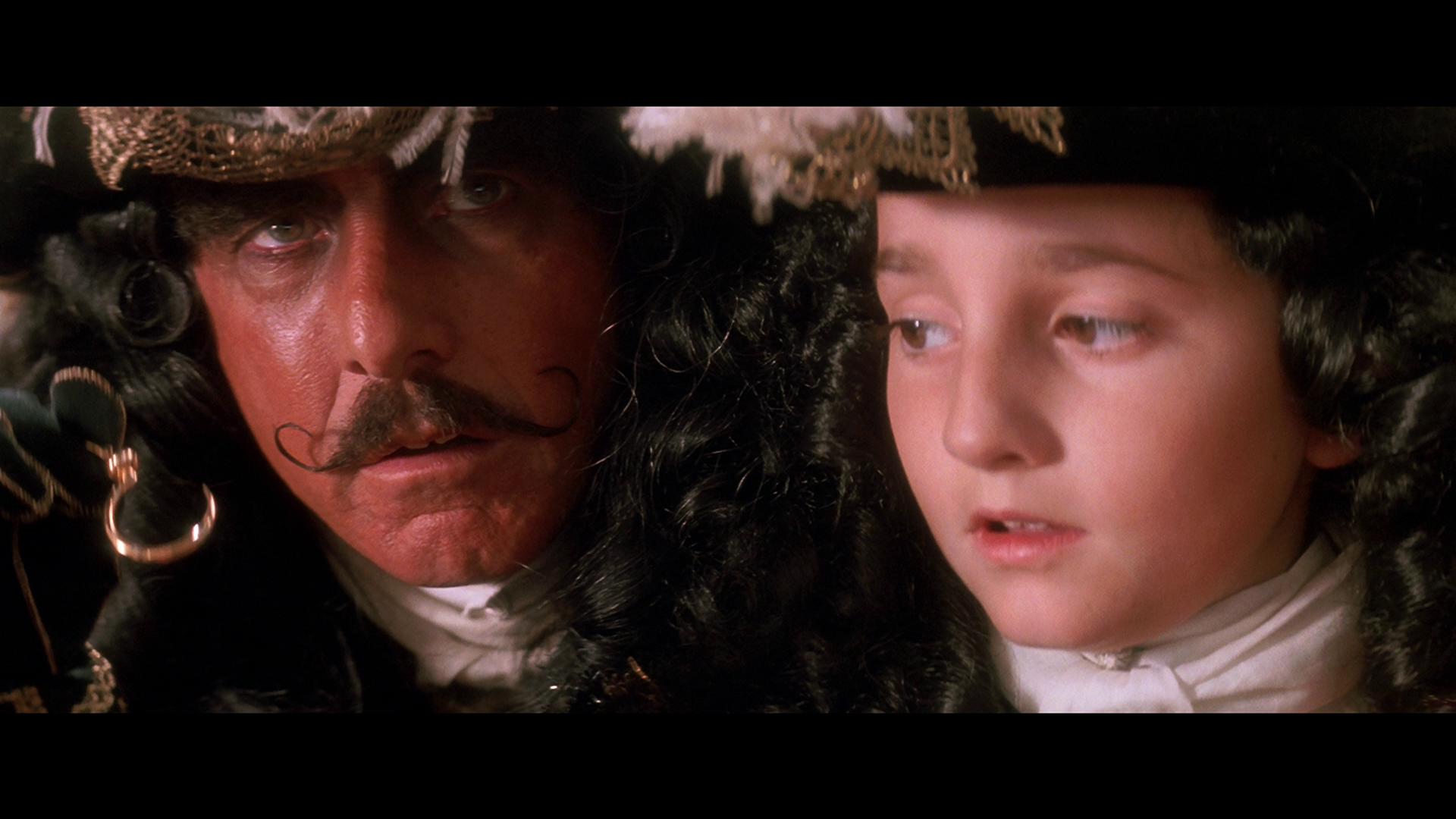 Overall, I was really happy with the 4K release of Hook as it certainly is one hell of an upgrade over my old DVD copy.  The visual and audio presentation of this release were spectacular to the point that this is another nice feature piece that you can own to really show off what your 4K setup can do.  The special features, while they were nice, did leave a little to be asked for as there wasn’t anything that featured any kind of behind the scenes footage.  If you’re considering this release for your collection, I would hands down recommend picking it up.  Hook is available on 4K UHD today. 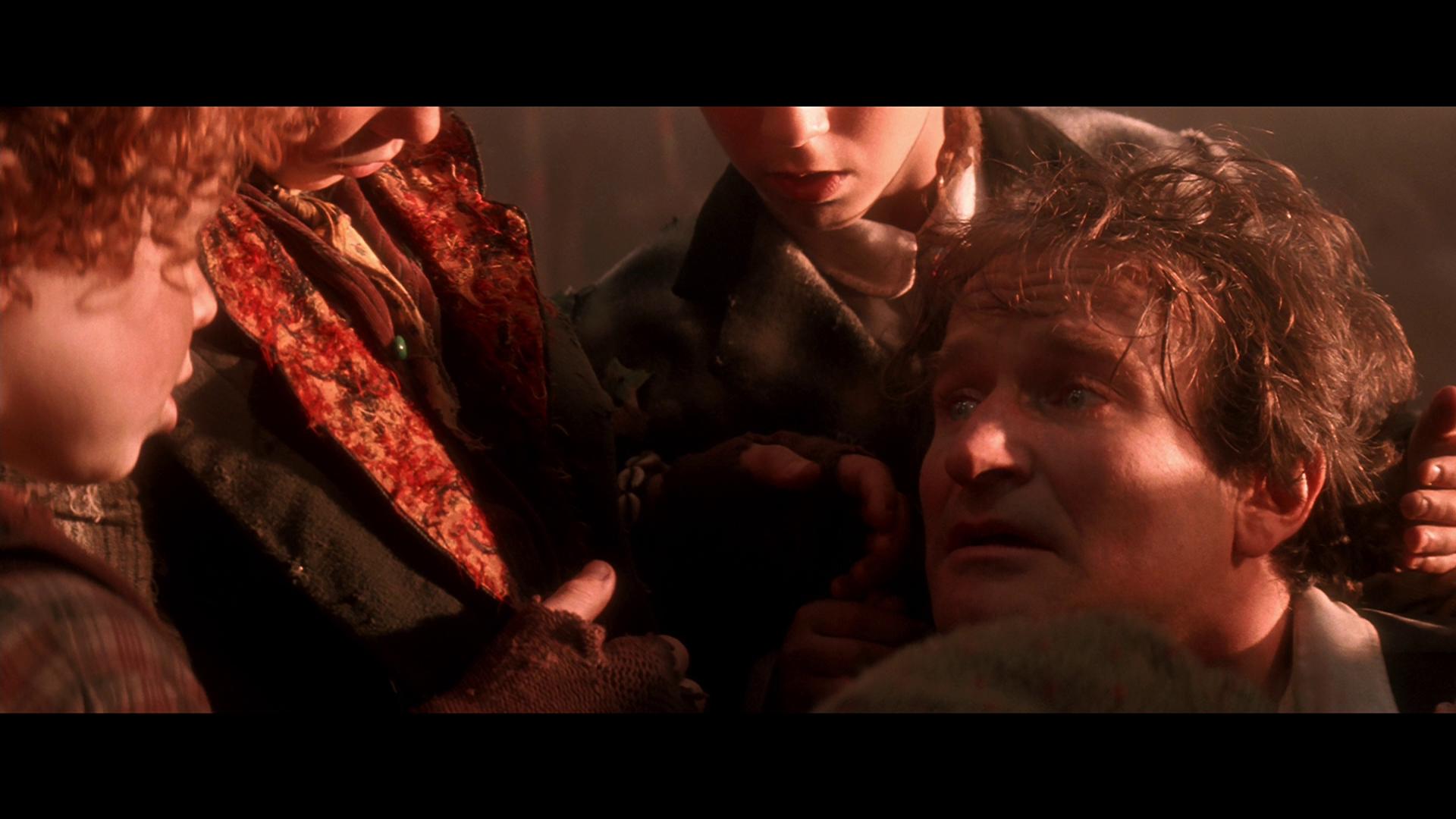