Originally, when it came to my home theater, I hadn’t really paid too much attention to the overall quality of the sound as I watched movies.  I had the frame of mind that as long as I could hear the film and story unfold before me, I was completely okay with it.  Before delving into the world of home theater, I had really never had an immersive experience while watching movies.  Now, after reading that last line, you may argue that I had the obvious immersive experiences by going to the theater to see a film during its theatrical run.  Unfortunately, I live in an area that doesn’t offer a great audio experience at the local theater, so many times my home theater was as good as it gets.  In fact, if I want a memorable experience in the cinema, I have to make a 70-mile trip to the larger cities, and at that point it doesn’t make too much sense financially.

It wasn’t until I had gotten more involved in critically analyzing films that I wanted to have the absolute best of the best home theater system to make sure that I could properly convey my thoughts, feelings and experiences as I watched something.

Originally, in my living room, I did have an out-of-the-box home theater system.  Sporting an emulated 5.1 experience, I had a really decent BOSE Cinemate Series II System.  Sure, the audio was loud and I was able to hear, what I thought, was everything.  However, it wasn’t until I brought home my current setup that I was completely wrong about my experiences.

With the introduction of Atmos Technology, I obviously sought out a receiver that would support it.  But, that brought up the question as to whether or not I wanted to go 5.1 or 7.1; and after a fair amount of research, ultimately decided to go the 5.1 route as my house really is not big enough to properly make use of 7.1. So, that afternoon I made the purchase of an Onkyo HT-R494 5.1.2 Channel receiver.  If only words could properly convey the sense of relief that I felt as I brought this receiver home.  It felt as if a major weight had been lifted from my shoulders and the excitement grew as I looked forward to eventually setting everything up.

This receiver is exactly what I was looking for, making use of the 4 HDMI-in ports, I was excited to finally get everything setup without daisy-chaining anything for my setup.  And for the price that I paid for it, the fact that it included 4K Passthrough certainly was the cherry on top.  I had to have this receiver.

Obviously with picking up the receiver, I needed to bring home some speakers.  Sure, I was excited to bring home my receiver; but, the excitement was beyond words when I finally had the opportunity to bring home my speakers.  The speakers that I brought home are certainly one of a kind, and really speak measures to the reviews that I had read about them with their top of the line deliverance; those speakers came from SVS, based here out of Northeast Ohio. 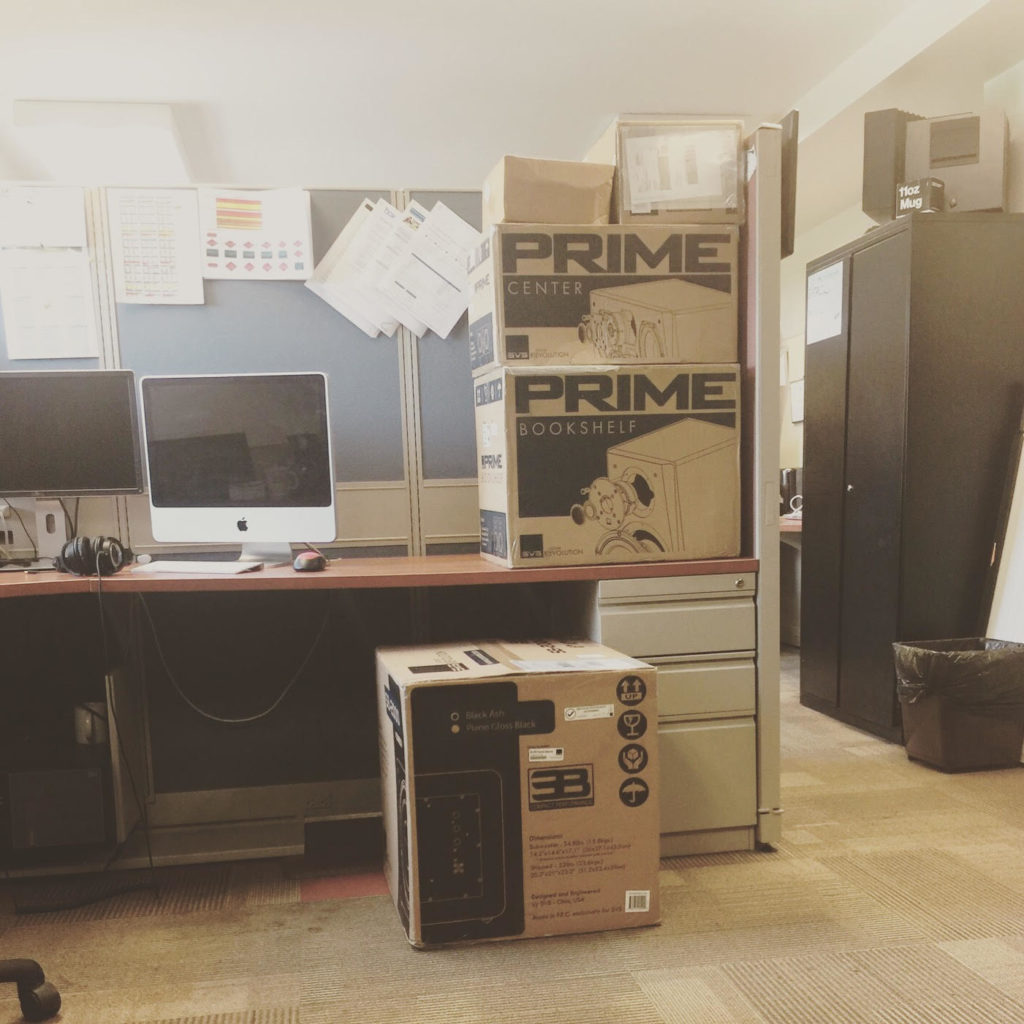 For my front speakers, I am using the SVS Prime Bookshelf Speakers.  These speakers make use of a 1-inch Tweeter and a 6.5-inch woofer and feature a frequency response of 48Hz-25kHz (+-3 dB).  And let me tell you, these speakers really provide a crystal clear experience.  I honestly wish I could find a way to properly convey how great these speakers sound.  Never in my life had I experienced anything like this. 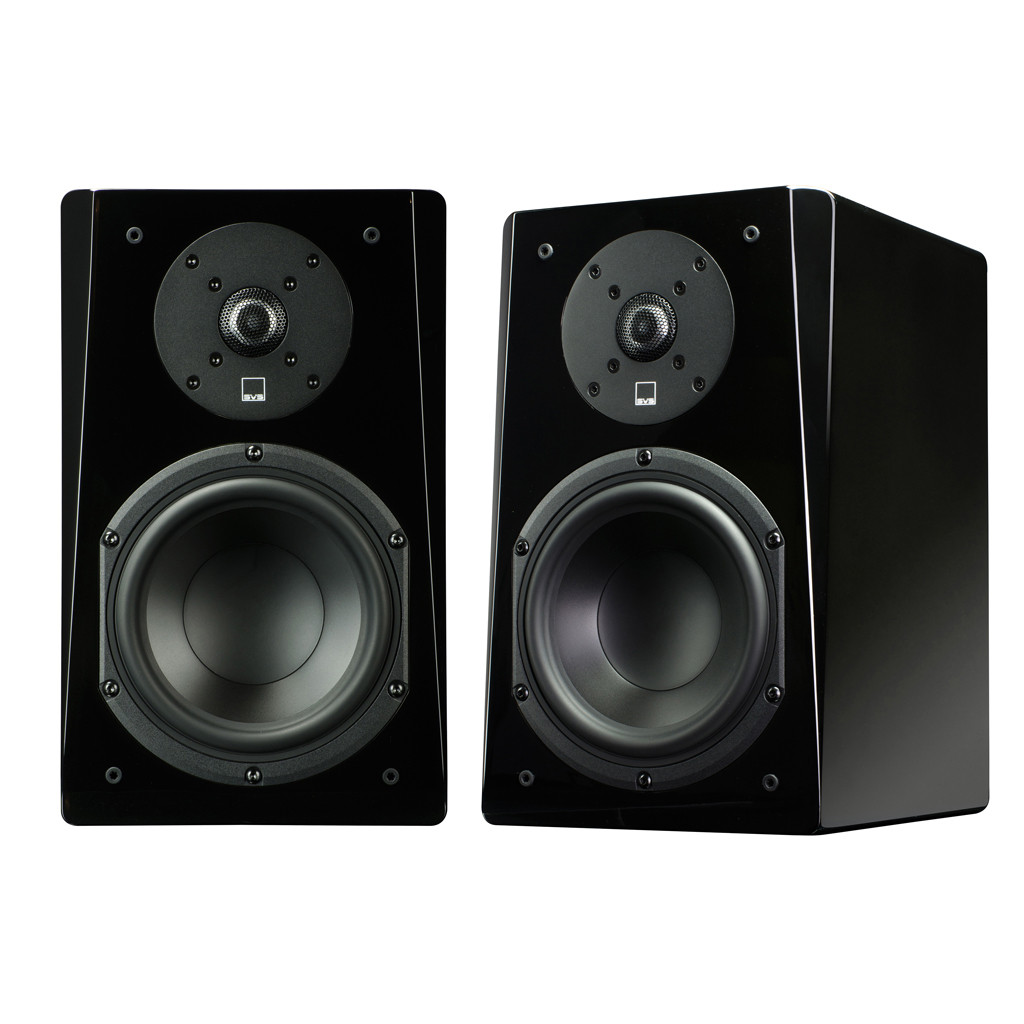 For the rear channels, I am using the SVS Prime Satellite Speakers.  Now, with the addition of rear channels into my home theater, I had no idea of what to expect as I had never experienced having audio behind me before.  I wasn’t sure if it was going to be an extension of the front audio or not.  I’d never truly experienced a surround effect until I had wired these speakers and I have to say that I was completely left speechless with this new audio.  Sporting a 1-inch tweeter and a 4.5-inch midrange and supporting a frequency response of 69Hz-25kHz (+-3 dB); these speakers really pack a lot of punch for their size. 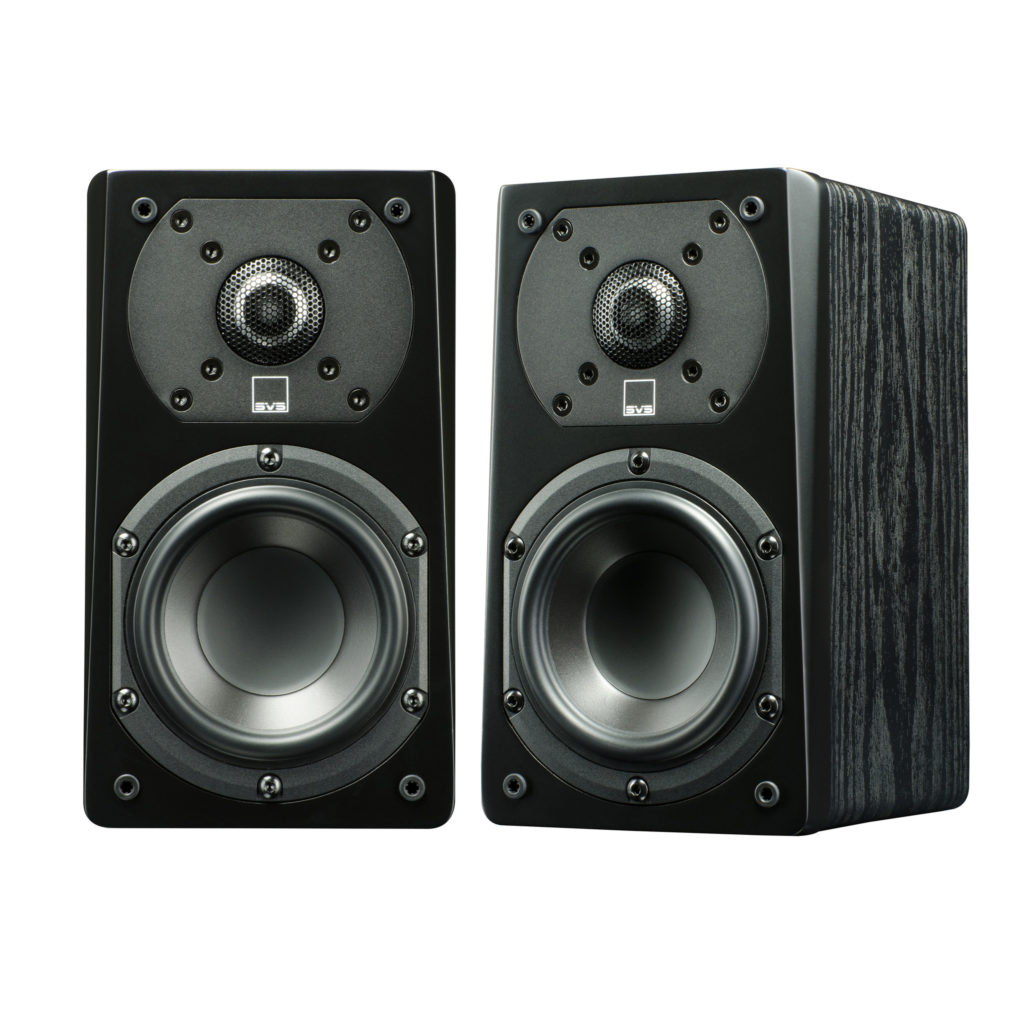 Now, let’s talk about the center channel. With having prior experience working in the music industry, I knew of the importance of the emphasis on the center channel.  Bringing home the SVS Prime Center unit, this was one of the largest center speakers I had ever seen in my life.  Now, size doesn’t mean quality though; so I was obviously nervous with this.  Featuring a 1-inch tweeter, a 3.5-inch midrange speaker and dual 5.25-inch woofers, this Center speaker is exactly what I would have dreamed about.  Having a frequency response of 48 Hz – 25 kHz (+-3 dB), the range of this speaker really brings out the immersion. 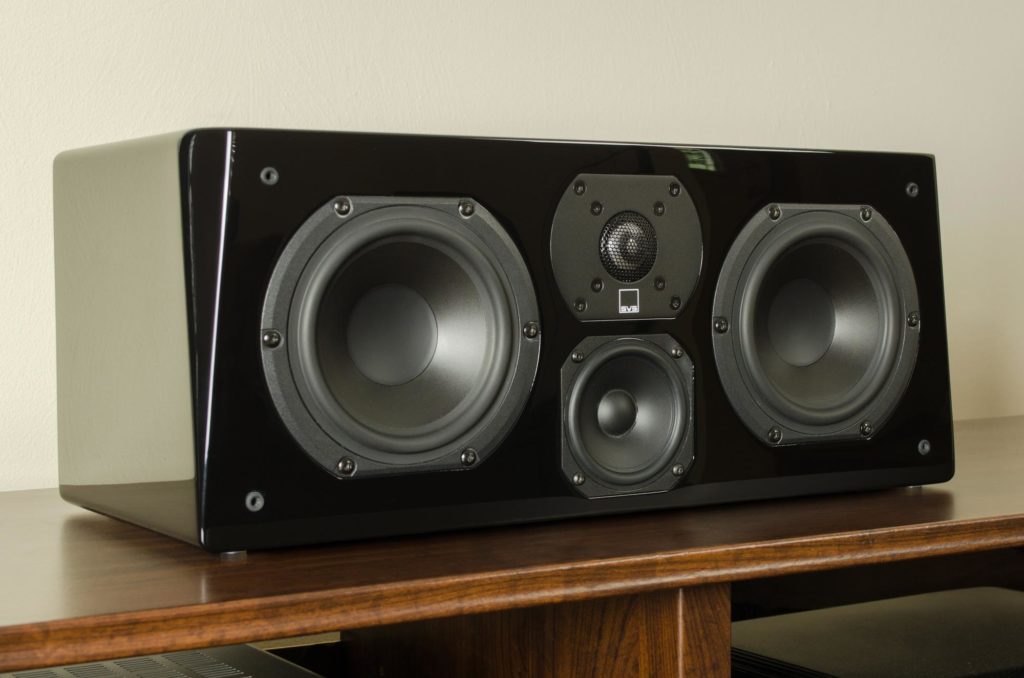 And then there’s the subwoofer.  Never in my life did I expect to be bringing home a 12-inch subwoofer to be used in my living room, but my SVS SB-2000 subwoofer made the trip home.  In the past, I’ve used 12-inch subwoofers for car audio and have had mixed experiences with.  However, this 34.8-pound behemoth really delivers a punch that will leave your jaw on the floor.  Having an astronomical audio rage, it really makes the highs and the lows known.  This subwoofer really makes the impact of whatever is happening on your TV known.  Watching Batman v Superman: Dawn Of Justice through this setup made me feel as if I were right there in the center of the action.  In fact, there was a couple of moments where I worried whether or not the neighbors were going to call the police on me for a noise complaint since it was late at night. 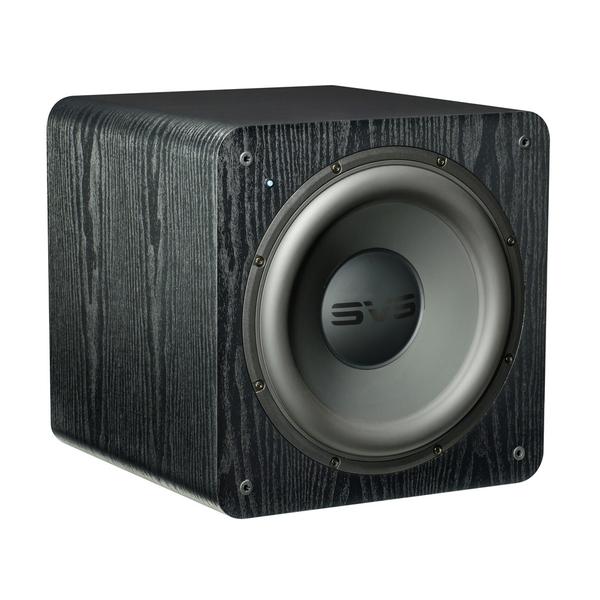 So, now that I had everything wired up, it was time to test out everything!  I wanted to see what this new setup had to offer and, pardon my French, but holy fuck.  I had absolutely no clue on what I was missing out on.  My first tests involved a couple of my personal favorites, with the first being a concert Blu-ray with famous nu metal band Slipknot.  One of my all-time favorite groups that I haven’t had the opportunity to see live yet, I knew that first impression would be determined on whether or not I felt as if I were there in the crowd.  And after playing through a few of my favorite tracks, I couldn’t help but feel as if I were there front-and-center watching Corey Taylor and his posse go insane on stage. 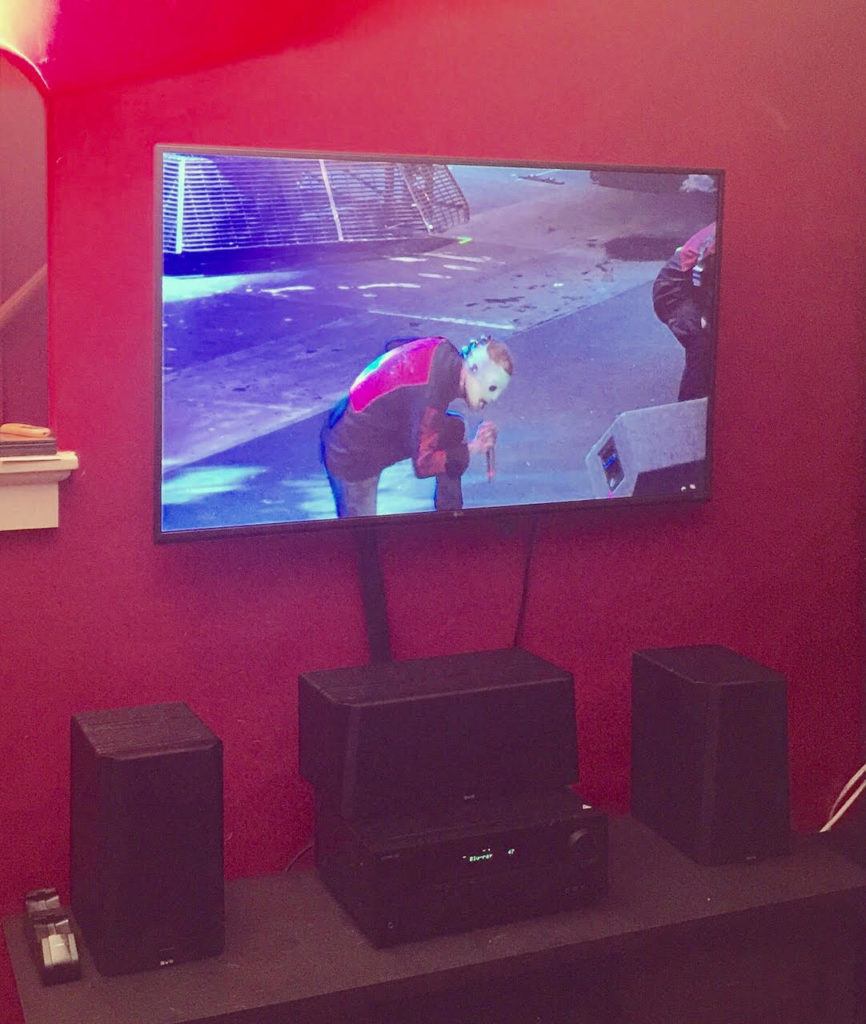 After that, I popped in The Thin Red Line from the Criterion Collection.  This film has always been one that I played at louder volumes because of the audible impact that it presents; and my God, I felt like I was right there in the middle of the action of World War II.  Hearing the rounds fly from all angles imaginable, I couldn’t help but let out an extreme squeal of excitement.  It truly felt like it was Christmas morning for me.

Now, I live with my fiancée and she wasn’t too keen on the idea of my personal tests of this setup, so making use of the Bluetooth connection that the receiver had to offer, we filtered through a few songs that she wanted to go through and as I looked over at her, I noticed a tear of joy running down her face.  The most memorable track we used during this test was one of Carole King’s songs.  My fiancée had grown up loving Carole and as I prepared the track, I could see the look of hesitation and pre-judgement cross her face.  However, once that track started playing she started to cry because she felt as if King was standing right in front of us performing in our living room.

After reading through this far, you may be asking yourself “Where are the Atmos speakers in this setup?” SVS just announced today their new lineup of Prime Elevation Speakers, which utilize some exciting new technology to provide an Atmos experience.  Of course, one may normally not look forward to the installation of Atmos speakers because of the inner-ceiling wiring and setup to make use of the elevation noise. 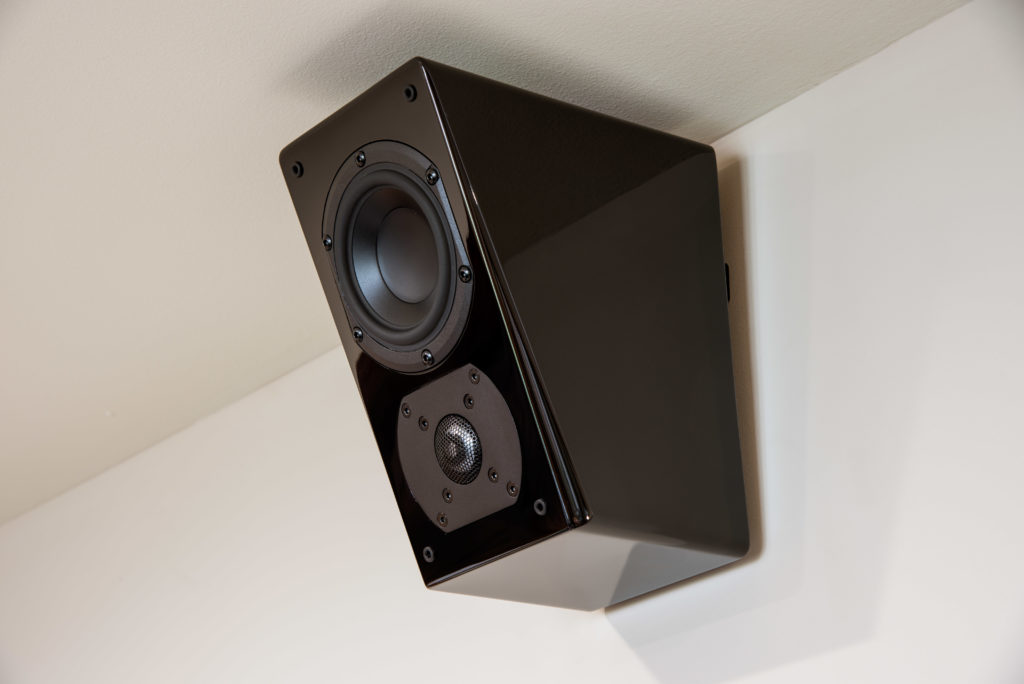 However, the Prime Elevation Speakers from SVS do not require in-wall wiring or ceiling placement; in fact, you can place them almost anywhere you’d like, having them fire up, down, or to the side, offering the Atmos object-based surround sound experience in a versatile package. SVS recommends using them at ceiling height, mounted on a side wall and shooting the audio downward, but for smaller rooms or challenging setups, they can be used in almost any capacity to add two Atmos channels to your home theater. The big takeaway is that these speakers do not require a ceiling-bounce to operate properly and deliver excellent sound, so they are flexible and a great way to break into the Dolby Atmos home theater space without revamping an entire room. It is an exciting new product, and one that I am definitely going to check out once I can get my hands on a pair! 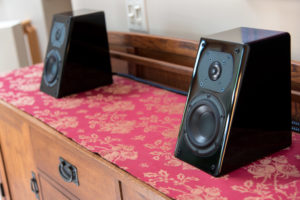 You may look at this review and ask “Why would this writer make a post about his setup?  This guy seriously sounds like an asshole while he brags about his setup!”  That’s not the point of this editorial.  I wanted to write something to get it out there because I had originally not given audio quality any attention, and I know I am not alone within the collector community.  Being able to hear and understand everything, I was content with what my old setup offered.  I want to tell you that if you in that same frame of mind, there is so much more out there that you’re missing with your home media.  Since installing this, I’ve heard things that I had never heard before in some of my most favorite films, and playing video games has provided an all-new experience on my weekends.

If you are on the fence about delving into the world of multi-channel home theater setups and have the financial means of doing it; I certainly recommend you do so now before you question your decision not to.  If you can, I highly recommend checking out SVS.  Their speakers are extremely high-quality and are a true testament to cinematic immersion.  Obviously, the decision to do something like this can make an impact on the wallet, so if you are worried about spending so much up front, certainly piece together your setup.  Even if it’s one speaker every so many months, just do it.  You will not regret the decision!

Now after having such a great experience with this decision, I’m curious to learn more about your home setup.  Having realized all that I had been missing out on, I want to learn more about things that I can do to really make use of this new setup.  So, comment below with your environment, let me know of your experiences and how you’ve made use of your home theater; making sure that you are getting the most bang for your buck!