Fast & Furious Presents: Hobbs & Shaw (also known simply as Hobbs & Shaw) is a 2019 American action thriller film that was directed by David Leitch and written by Chris Morgan and Drew Pearce, from a story by Morgan. It is a spin-off of the Fast & Furious film franchise that’s set between the events of 2017’s The Fate of the Furious and 2021’s F9. The film sees Dwayne Johnson and Jason Statham reprise their roles from the main series as Luke Hobbs and Deckard Shaw respectively, and also stars Idris Elba, Vanessa Kirby, Eiza Gonzalez, Cliff Curtis, and Helen Mirren. The plot follows the unlikely pairing of the titular characters as they team up with Shaw’s sister to battle a cybernetically-enhanced terrorist that is threatening the world with a deadly virus.

Series star and producer Vin Diesel first said in 2015 that possible spin-offs were in early development, and Hobbs & Shaw was officially announced in October 2017. Leitch signed on to direct in April 2018, and Kirby and Elba both joined the cast that July. Filming began in September and lasted through January 2019, mostly taking place in London and Glasgow.

Hobbs & Shaw premiered at the Dolby Theatre in Hollywood on July 13, 2019, was theatrically released in the United States on August 2, 2019, and grossed over $759 million worldwide. The critical consensus on Rotten Tomatoes says that it “gets decent mileage out of its well-matched stars and over-the-top action sequences.”

While the movie has little to no cinematic value as it’s predominately a dick measuring contest between Johnson and Statham, I found Hobbs & Shaw to be a nice, fun, and completely mindless experience that didn’t really require me to pay too much attention to it after a long day at work. The story was interesting enough to allow for some loose following, and the action sequences overall were simply a blast to sit through.

Boasting a very sharp and refined presentation, the Blu-ray release of Hobbs & Shaw is definitely the peak of the underlying technologies that accompany the format. Features like skin pores, hair follicles, and definition of the various tattoos that some of the characters have, everything was just beautifully refined and allowed for an intensive experience as I watched along.

Packaged with an insanely immersive Dolby Atmos audio track, the Blu-ray release of Hobbs & Shaw packs one hell of a punch and does a really great job at placing the viewer right into the middle of the action, and the overall story. While there really aren’t any parts that stand out more when put up against each other, the audio of this release was clean, clear and offered no issues while watching along. The dialogue of the characters was clean and easily understandable and offered no problems with hearing what was said.

The Blu-ray release of Hobbs & Shaw comes packaged in the standard two-disc amaray case.  In that case is the standard Blu-ray copy of the movie, the standard DVD copy as well as a digital copy redemption pamphlet.  There is a slipcover that was made available during the first pressing of the release that features the same artwork that’s made available on the case.  Unfortunately, I do not have the slipcover for this release as I am a heathen and I throw away my Blu-ray slipcovers that normally do not fall under the boutique label. 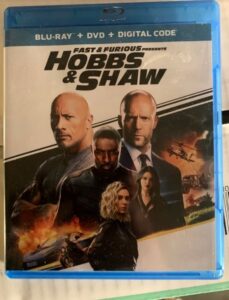 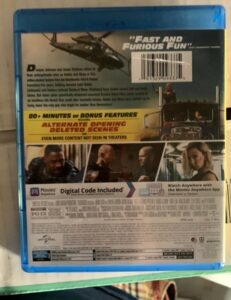 There are a good number of additional features that come with the Blu-ray release of Hobbs & Shaw. The included material offers a nice backstage look at some of the production work that went into making the movie, as well as some of the experiences with the cast as they have fun working together on this movie. Included with this release is:

While Hobbs & Shaw isn’t really going to be anyone’s number-one movie, it does pack an interesting punch and adds some continued storyline for a couple of characters that needed some more development. I was able to sit back and watch through this and not be bothered by any possible distractions. The audio and video quality of the Blu-ray was really nicely done, I can only imagine how good it looks with HDR on 4K UHD. If you too have been collecting the movies from this saga, it’s definitely worth picking up Hobbs & Shaw. Hobbs & Shaw is available on Blu-ray and 4K UHD today.