There has been so much written about Wes Craven’s The Hills Have Eyes that to write my own critical review would be less useful than to talk about what Arrow Video has done with this release, so the majority of this review will focus on the excellent restoration work done by Arrow and their partners.

The Hills Have Eyes (1977) was released right in the midst of a horror renaissance in the 1970s. Films like The Exorcist, The Texas Chainsaw Massacre, The Omen, Black Christmas, Halloween, Carrie, Craven’s The Last House on the Left, and many, many others were all released in this excellent decade for horror. Many of these films featured similar styles, with low-budgets and a gritty, almost homemade feel, and The Hills Have Eyes stays consistent with this trend. The film was shot on a shoestring budget with largely no-name actors, but almost immediately became a cult classic and was a huge box office success, grossing $25 million on a paltry $230,000 budget.

If you like Wes Craven and are a fan of films like The Texas Chainsaw Massacre, Wrong Turn, The Devil’s Rejects or similar exploitation-horror movies, you will enjoy The Hills Have Eyes. There are iconic characters, like Michael Berryman’s portrayal of Pluto, and many iconic scenes Simply put, it is a staple of cult horror. Thankfully, Arrow Video has stepped in to restore this cult classic in HD, as the previous Blu-ray release from Image Entertainment is widely regarded to be a terrible HD transfer.

The Hills Have Eyes was shot on 16mm cameras, and the source material, now almost 40 years old, was hard to find. From the booklet included with this release, Arrow Video comments on the transfer process:

The Hills Have Eyes is presented in its original aspect ratio of 1.85:1 with its original mono soundtrack. The film’s grainy appearance is due to the fact that the film was originally shot in 16mm. This textured look is correct and in keeping with the film’s original theatrical release.

The film was scanned in 4K on a Northlight Film Scanner, selecting the reels in the best condition from two separate 35mm CRI elements struck from the 16mm AB negatives, which have been lost. The original soundtrack was transferred from original 35mm print elements. Grading was performed on a DaVinci resolve and restoration was completed using PFClean.

All work was done at Gammy Ray Digital, Inc., Boston, Massachusetts, USA. Scanning and grading was overseen by Perry Paolantonio and the restoration work was supervised by Benn Robbins.

You can clearly see the level of care that has gone into this release, and with the expertise of the folks involved and Arrow’s reputation providing the highest quality releases of cult classics, there is much to be excited about. 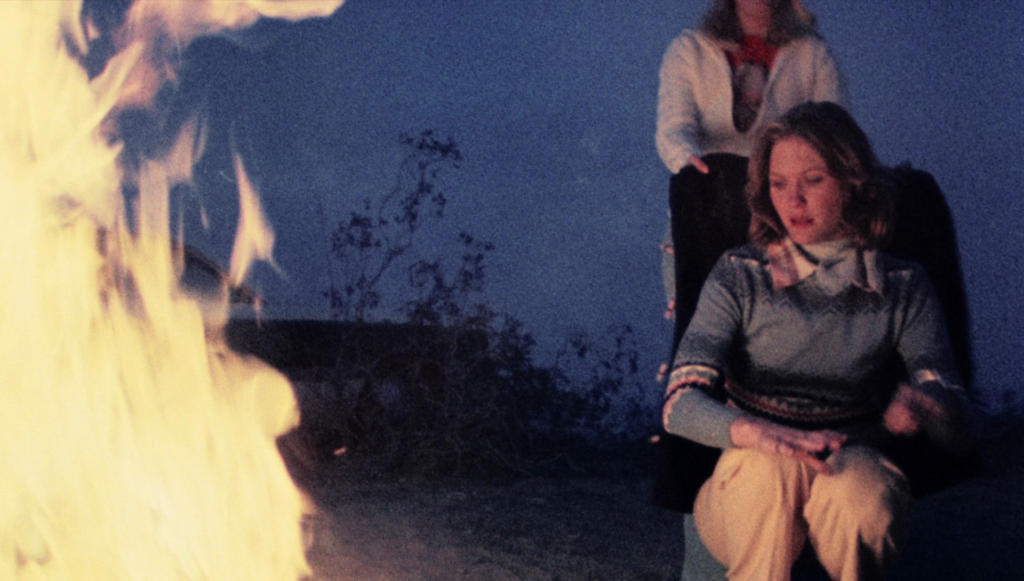 The Blu-ray transfer looks great, considering the source, and it is clearly the best that this film has ever looked on home media; making this by far the definitive edition to own. The grainy image feels authentic, and you’ll need to embrace the grittiness of a film that is of this age, coming from a secondary 35mm source which was created from 16mm negatives. Those who are looking for a smooth image will not find it here, but the authenticity is what makes this transfer so great; it feels just like it would have in a theater in 1977. The colors are appropriate for the time period, and although there a few instances where there is damage to the film, you take what you can get when it comes to cult horror films like this. 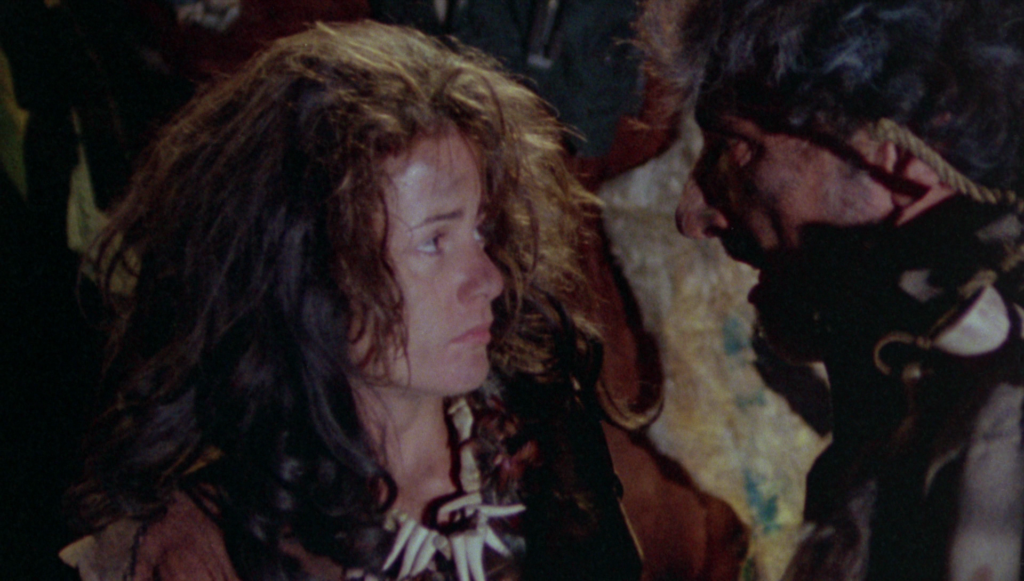 Being mastered from a secondary source where multiple reels were used can lead to some variation in quality, and you will notice that some of the scenes may seem blurry, or have a much heavier grain than others. However, it was not distracting, and is still miles ahead of the older Image Entertainment scan. If a better source is hiding in an attic or a basement somewhere and comes to light in the future, there may be a better release of The Hills Have Eyes available at some point, but right now, this is an excellent 4K mastered transfer that will delight even the most critical videophiles.

The Hills Have Eyes features an LPCM mono track, sourced from original 35mm prints. The soundstage is limited due to the single channel, but dialogue was clear and my Prime Center speaker handled the varying highs and lows very well. The audio is a bit more consistent than the visual quality, as the soundtrack was sourced from a single original print, but it is pretty basic. The score reflects the fact that this is an above average mono track, but compared to newer audio tracks, even those that are mono, it is not nearly as strong. What we get from Arrow is more than acceptable for a release of this age, and viewers should be happy as long as they have a strong center channel. 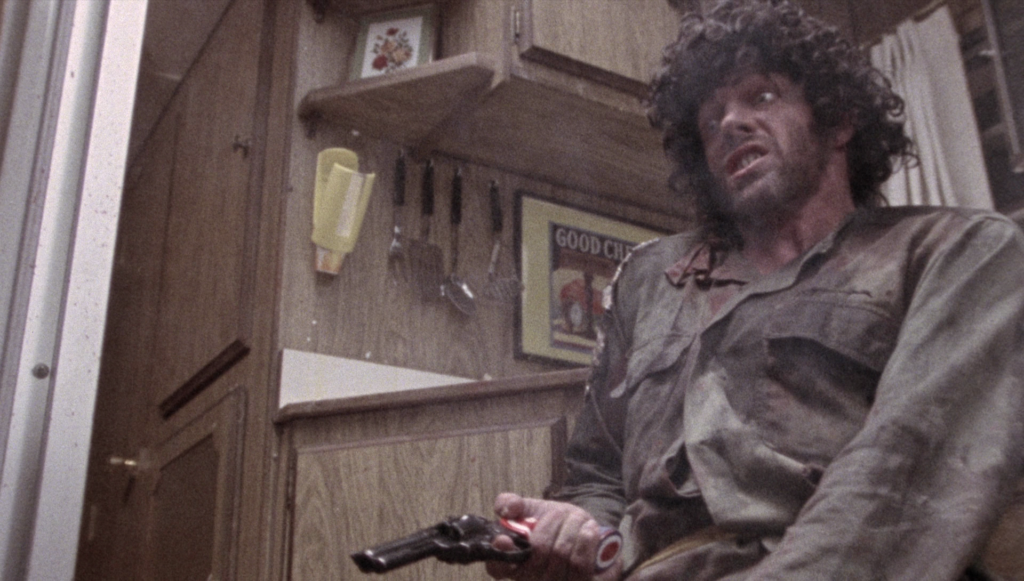 Arrow Video has always delivered some of the finest Blu-ray releases in terms of packaging and features, and The Hills Have Eyes is no exception, marking what I believe is their finest release since Bride of Re-Animator. The limited edition digipack features newly commissioned artwork by Paul Shipper on the front, and a full list of features and information on the back. The heavy cardboard Arrow uses for their digipacks is of a higher quality than even Criterion, and this release has a very sturdy, permanent feel to it. 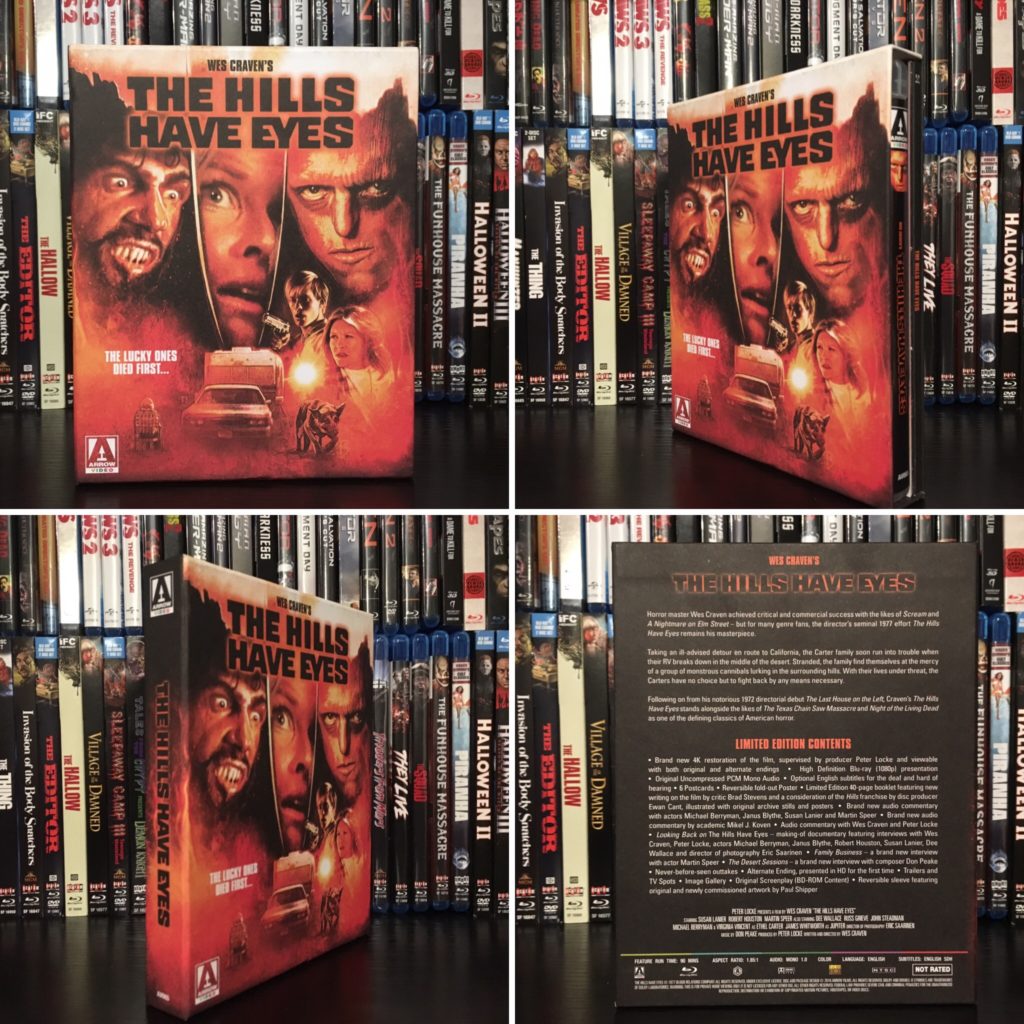 On the inside, we are treated to a copy of the film on Blu-ray, in the standard Arrow Video thick, clear case. Inside the Blu-ray case is a single Blu-ray disc, as well as six postcard art pieces featuring the theatrical artwork from around the world. The case also features reversible artwork, with the new art from Paul Shipper as well as the original theatrical artwork as options.

Also included in the digipack is a 40 page book (seen above), with essays on the film and the aforementioned information on the transfer, as well as many stills from the film. The book is very sturdy as well, and has a high quality feel to it. Finally, there is a reversible poster, featuring the same two-sided artwork as the Blu-ray case. All in all, it is an excellent package, and quickly jumped to the top of my “Favorite Releases” list. It will look great on a shelf or on display as a centerpiece of a collection. 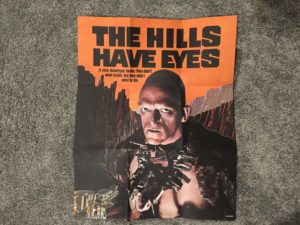 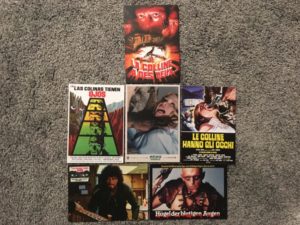 One interesting note is that this is a limited edition, and Arrow truly does mean “limited”; it is not just a marketing gimmick. The Bride of Re-Animator Limited Edition went OOP fairly quickly, and judging by the identical Hills Have Eyes Arrow UK release, which is limited to 5,000 copies, I would assume a similar number of copies will be available in the US. However, just like Bride of Re-Animator, I would bet that Arrow will release a standalone Blu-ray release of The Hills Have Eyes a few months after this set goes OOP. However, definitely grab the Limited Edition if you can; the bonus materials are well worth it.

Now to the features, which are extensive. For starters, there are three commentary tracks, with two being brand new. One of the new track features many of the original actors, while the other is a solo track by film scholar Mikel J. Koven. The third track features Wes Craven and Peter Locke, and although not being unique to this release, it is still probably the most interesting of the three; but hey, I’m a big Craven fan. 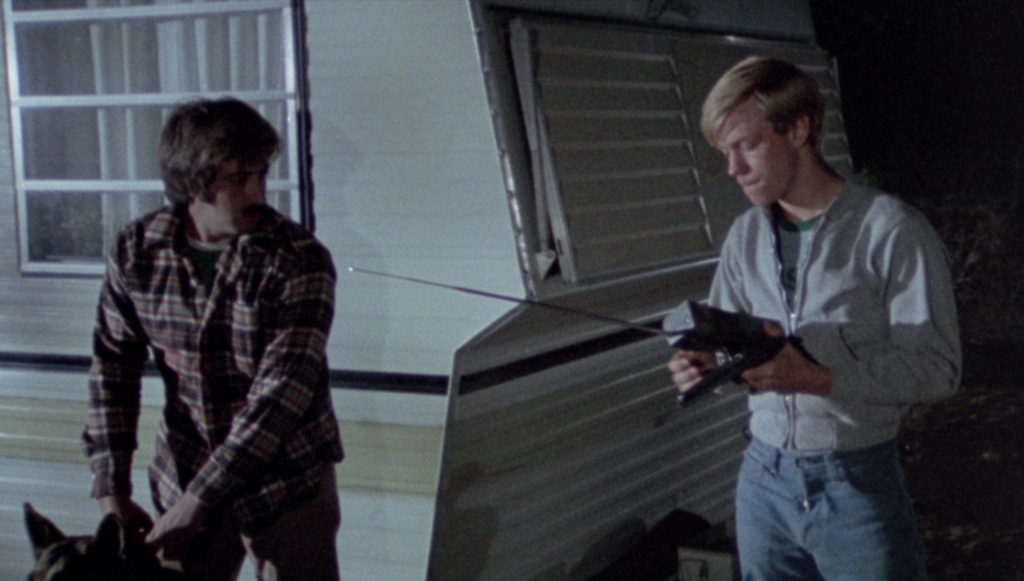 One of the biggest features is a making-of documentary, Looking Back on The Hills Have Eyes, which features a ton of interviews and behind the scenes footage. This is an essential watch for horror fans, especially those with an admiration for Wes Craven. There are also a couple of brand new interviews with the cast and crew, as well as an alternate ending, available for the first time in HD. Trailers and TV spots are included, and if you have a BD-ROM drive, you can also access the original screenplay. All in all, what more could the horror community ask for? This release nails every last bit of the packaging and special features, and major props are in order once again for Arrow Video.

Region Coding: Both the UK and US releases are Region A and B compatible 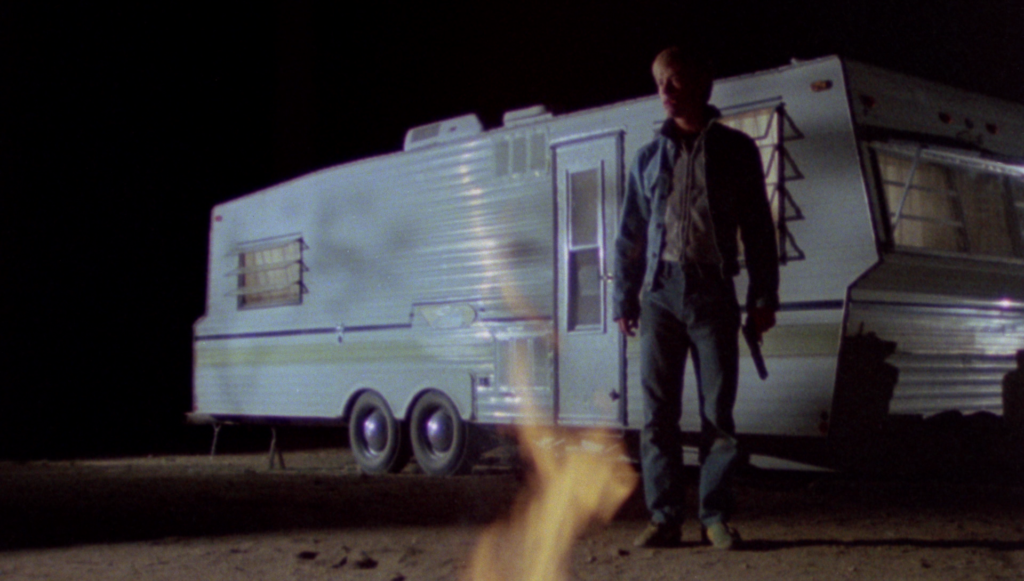 If you collect horror movies and consider yourself a horror aficionado, then The Hills Have Eyes Limited Edition from Arrow Video is one release you cannot miss. This is the best the cult classic has ever looked on home media, with excellent care put into this transfer by Arrow Video and their partners. The packaging and special features place this release firmly into an Elite category of Blu-ray Limited Editions, and it instantly became one of my favorite pieces in my collection. At a price point of $28 in the US, it may seem like a lot, but when you consider the extras like the poster, postcard, booklet, and digipack, it is priced appropriately. I would definitely jump on the Limited Edition if you can, as I would not trust that this will get a standard release. Even if it does, that standard release will sell for around $20, so if you love Wes Craven, horror, and cult movies, the extra $8 is well worth it to pick up a Blu-ray release of this quality.