Hell or High Water was released earlier in 2016 to rave reviews and great box office returns for a smaller film. On a budget of just $12 million, it brought in more than double at the box office at over $30 million, making it a likely financial success. The story is pretty straightforward; Toby (Chris Pine) begins a crime spree with his ex-convict brother (Ben Foster) in an effort to rob the chain of banks that has tried to foreclose on their family ranch. While the brothers rob the banks all over Texas, an aging Texas Ranger (Jeff Bridges) attempts to track them down, even as he is just weeks from retirement. It is a classic cat and mouse tale, right down to the eventual showdown between the brothers and the Ranger, who refuses to go quietly into the night. 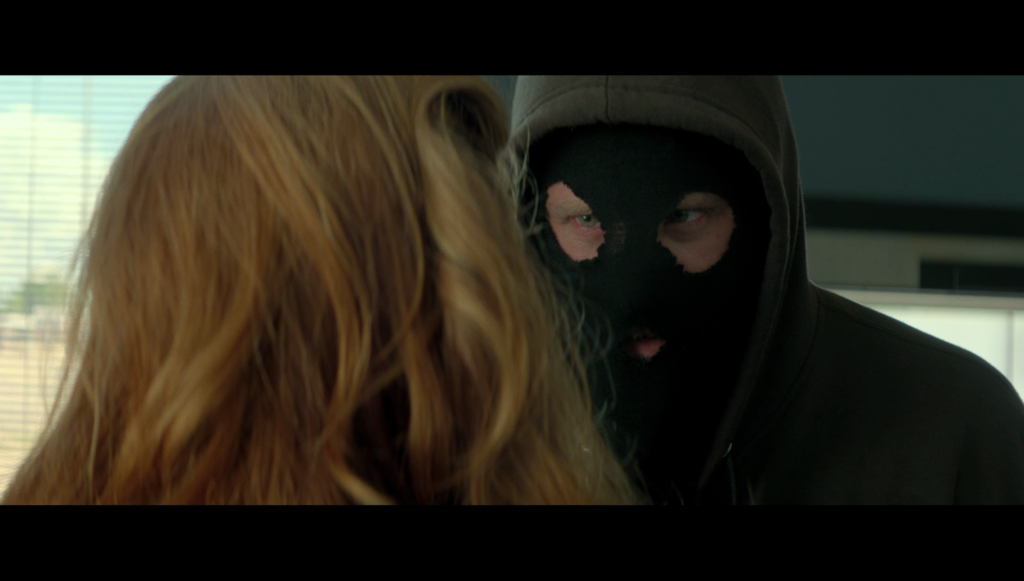 While the story is fairly simple, the acting is really what makes Hell or High Water one of 2016’s best films. Chris Pine transforms himself as Toby, and Ben Foster is excellent as his loose cannon and violent brother Tanner. Jeff Bridges also delivers another career-defining performance as Ranger Marcus Hamilton, in a familiar role (think No Country For Old Men) that Bridges simply makes his own. Writer Taylor Sheridan, who also wrote Sicario and Sons of Anarchy, is in familiar territory with his storytelling when it comes to Hell or High Water, but he is quickly establishing himself as one of the pioneers of a new Western movie movement that focuses on the Texas area down by the Mexican border. Hopefully there is more good to come, as Sheridan clearly has a knack for telling tales from America’s heartland.

Hell or High Water looks great on Blu-ray, with the desolate Texas backdrop creating a very nice visual palette. The reds, yellows, and oranges look great, and the rare splash of vibrant color, like a lime green Mustang or a hotel lobby, really stands out as a result. The image can be a bit soft around the edges at times, but for the most part it is a nearly perfect image. My favorite pieces are definitely the long landscape shots, but just about everything in this film looks excellent and makes full use of the Blu-ray technology. While not as striking as something like Sicario, which was a highlight of 2015 while using a very similar visual backdrop, Hell or High Water still looks great and will likely make a Top Ten list for visuals on Blu-ray for 2016. 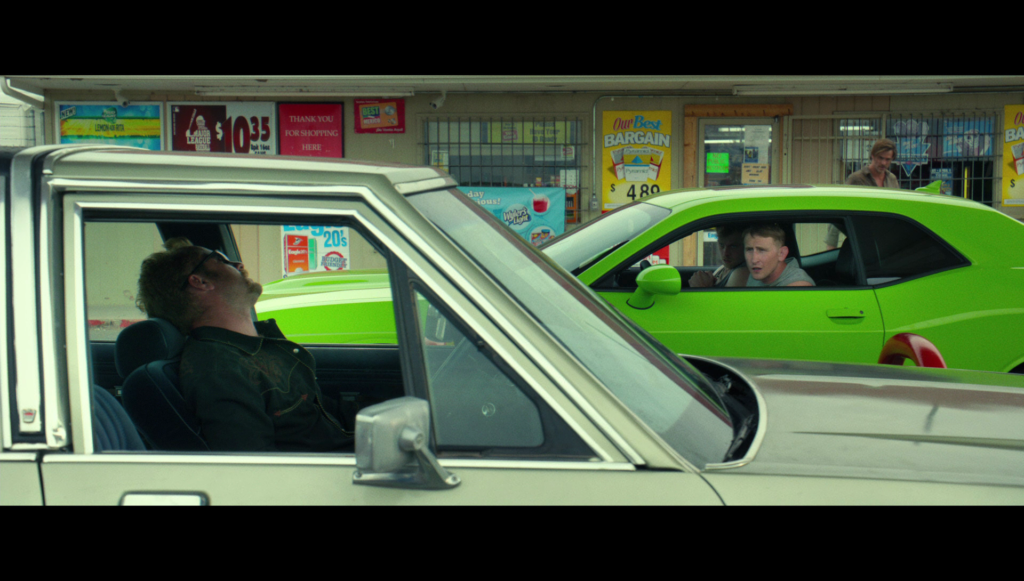 Sporting a DTS-HD Master Audio 5.1 track, I actually was hoping for a little bit more out of Hell or High Water. The action scenes sound good, and the dialogue is crystal clear, but the vast expanse of the Texas landscape and the gunshots and racing cars truly called for a higher end track, at least a 7.1 if not an Atmos experience. The 5.1 track is still fairly immersive, creating a nice sound stage and making use of all of the channels to full effect, but one can only wonder if there was more left out on the Blu-ray transfer. One surprising thing was the aggressive use of bass, as my PB-2000 subwoofer from SVS sounded great and really added some dramatic effect to the heart-pounding action sequences.

Hell or High Water comes to Blu-ray in a combo pack, with a DVD and digital copy redeemable on iTunes or UV providers. The first print run comes with a standard slipcover, and I love the artwork, so high marks are given there. Rather than a typical, boring piece of cover art, Lionsgate went out and delivered some excellent new art featuring the main characters and creating a striking image. 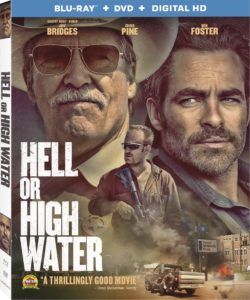 As for special features, there are a few short featurettes focusing on the characters and performances as well as the American heartland, a roll of Red Carpet premiere footage, and a filmmaker Q & A. There is not a ton of content here, but if the film really piques your interest as it did mine, you will find that these features are well worth your time. 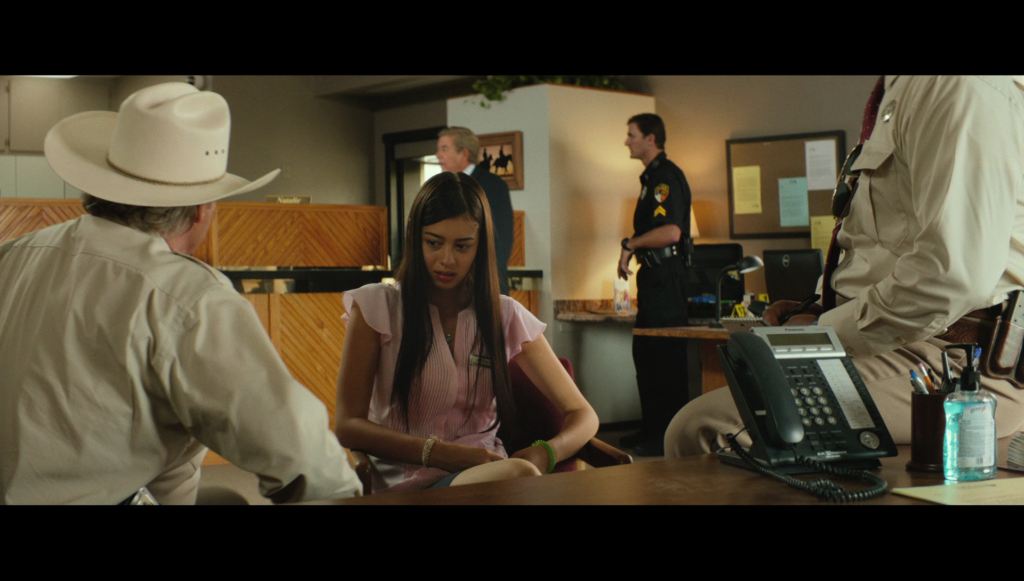 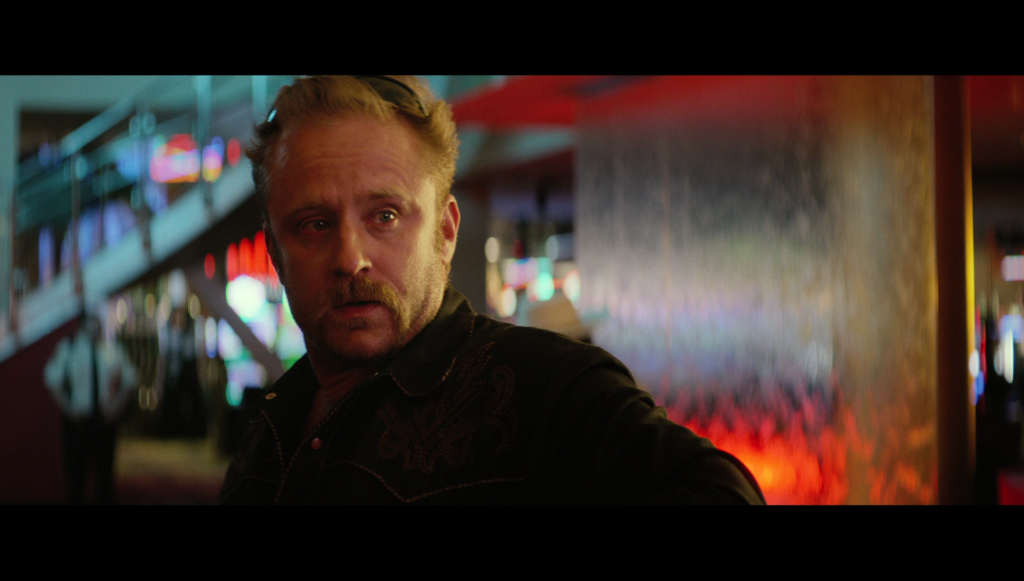 Hell or High Water is 2016’s first must-see movie, and it will likely compete on a few levels at next year’s Academy Awards. The technical presentation is strong, with excellent visuals, and although I wanted more from the audio. the 5.1 track is sufficient. The artwork on the slipcover is excellent, and the features are just average, but interesting. I do recommend a buy, and an immediate watch if you missed it in theaters. You can find Hell or High Water on Amazon or at retailers everywhere, available now!