To Have and Have Not, released in 1944 by Warner Brothers, is the kind of film that could have easily slipped through the cracks, if not for a competent creative team and a pair of stars whose chemistry oozes off the screen. The casting of Humphrey Bogart as yet again another reluctant American who gets caught up in the struggle to save foreign agents from Germans in a small, foreign colony during World War II forces a decidedly unfavorable comparison to his classic portrayal of the character Rick in the classic film Casablanca. Without the strong guiding hands of respected Hollywood director Howard Hawks, and the inspired casting of leading woman Lauren Bacall as Slims, the film would merely be an echo of Casablanca, doomed to linger in its shadow. Instead it, somewhat unsuccessfully, tries to be something different. 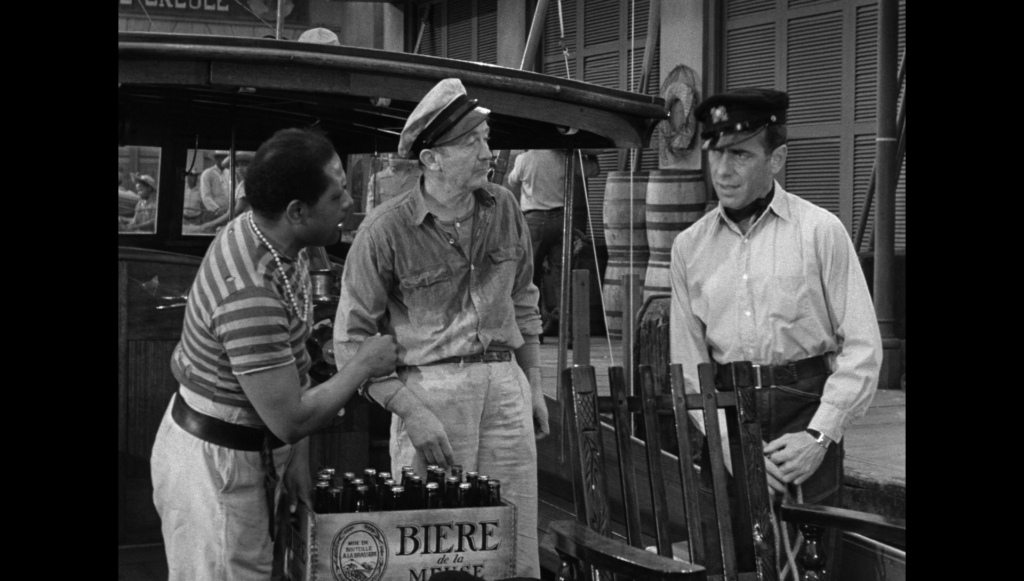 To Have and Have Not follows the story of fishing boat captain Henry Morgan, an American living in the French colony of Martinique shortly after the fall of France to the Germans during World War II. After a stretch of bad breaks, he runs into the beautiful, but mysterious woman whom he affectionately refers to as Slims, and together they kindle a tense, burning romance as the Vichy government begins to tear up the town in search of Free France sympathizers. Desperate to get Slims away from the treacherous local law officials, he accepts a job smuggling French agents into the colony. After a tense engagement with the Vichy on the water, he must work together with his long time alcoholic partner Eddie, Slims, and the locals to see that they escape the long reaching arms of the Vichy French in one piece. 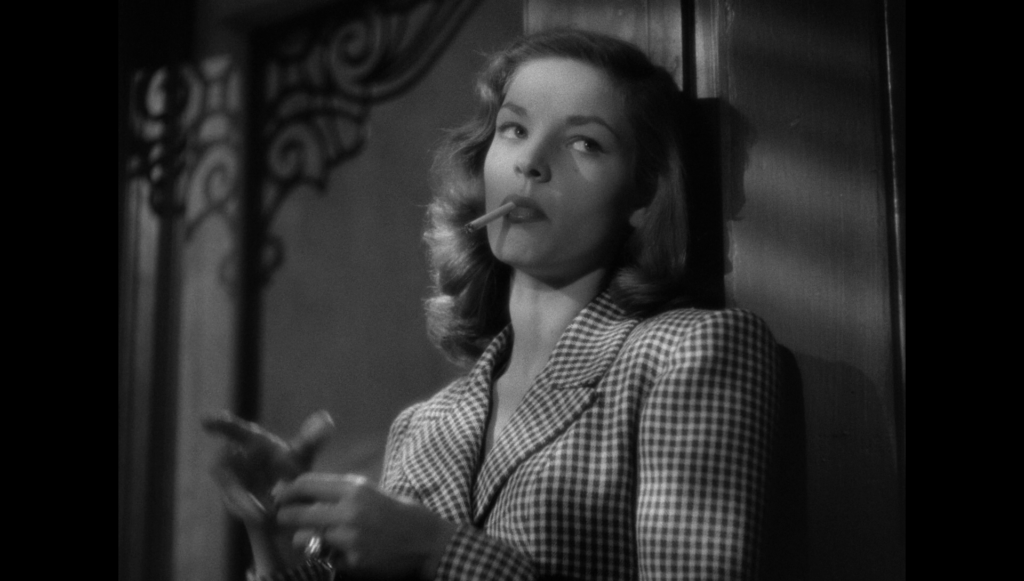 It would be far too simple to call this movie Casablanca on a boat, but so easy at the same time. Bogart plays the same character, but swaps out a few adjectives on his way to portraying the character of Henry Morgan. He’s smooth, romantic, and confident, much like Rick. The transition from cocky nightclub owner to blue collar fishing boat captain plays more to his strengths as an actor. To me, Humphrey has always played his best roles as a man struggling to earn his place in the world, and is far more at home playing a fishing boat captain, or a private eye on the hunt. Bacall, in her first leading role, shines as the mysterious, but incredibly desirable Slims. Her stunning beauty, combined with sultry line delivery commands attention in a way that few actresses ever achieve, especially when paired up with a Hollywood legend like Bogart, who would become her future husband. Their chemistry together on screen singlehandedly saves the film, nearly steaming off the screen each time they share screen time together. 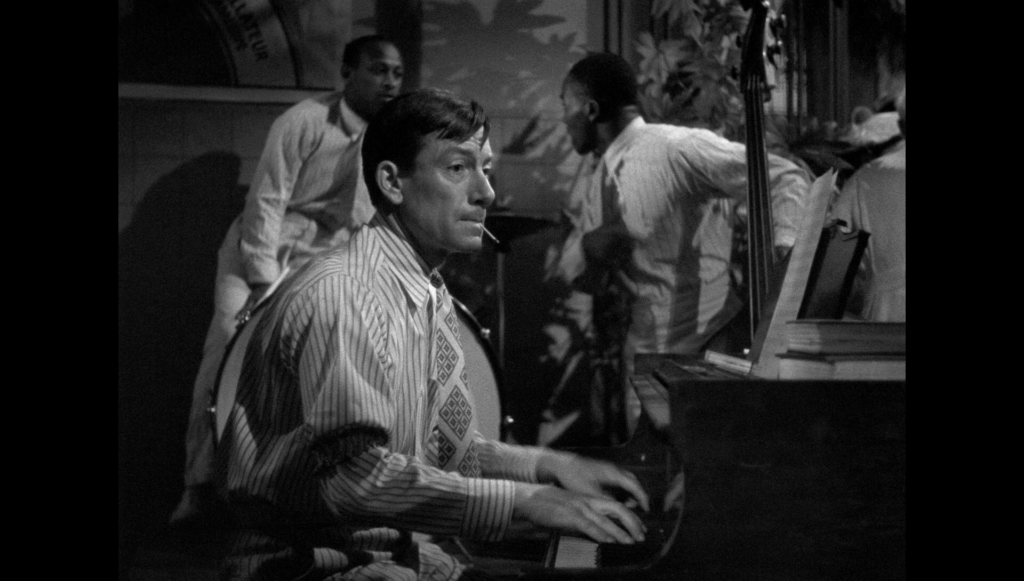 To Have and Have Not, which was loosely adapted from an Ernest Hemmingway novel of the same name, suffers when it moves focus away from our leads’ budding romance. The script never really gives you any sense of urgency or weight to the mission that Morgan takes up in a moment of desperation. Where Casablanca succeeded in drawing you into the plight of the resistance movement, this film sort of just inserts it as an afterthought. There is a subplot dragged out later on concerning Henry and the French agent’s wife that just slows the film to a crawl, feeling unnecessarily and overly dramatic. It’s clear to me that this film saw various rewrites before it made it to the screen, leading to a somewhat fractured set of subplots that never fully get explored, such as Henry’s friend Eddie’s alcoholism throughout the years, and those that were mentioned above. It tries to hit some of the same story beats as Casablanca, but it never really feels fully focused enough to achieve any sort of success. 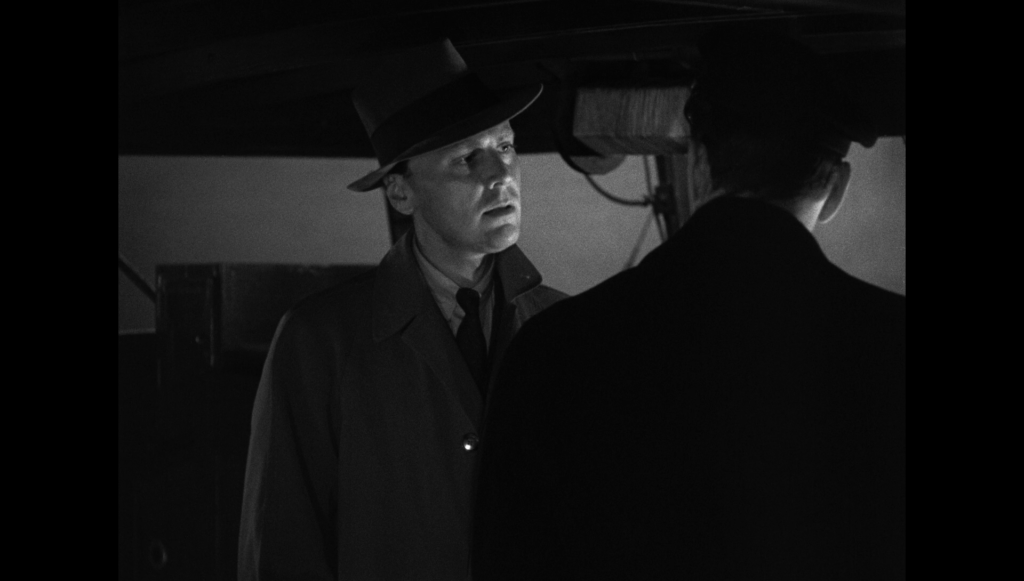 Howard Hawks to me has always been an actor’s director, directing brilliant performances from many of Hollywood’s best actors and actresses throughout the years, and his talent shines through even when the script lags behind. His ability to create chemistry between Bogart and Bacall that nearly drips right off the screen is incredible, and carries this film out of mediocrity into becoming a somewhat enjoyable, if not slow silver screen experience. Coupled with a strong supporting performance by Walter Brennan as Eddie, and competent cinematography by accomplished longtime Warner cinematographer Sidney Hickox, To Have and Have Not is a mostly worthy cinematic endeavor.

To Have and Have Not was shot of 4-perf 35mm film, and presented theatrically using the 1.33:1 aspect ratio. For restoration purposes, due to a missing original camera negative, the film was scanned and reconstructed using a fine grain positive by Warner for this Blu-ray release. It is presented in 1080p, maintaining the film’s 1.33:1 aspect ratio via pillarboxing. 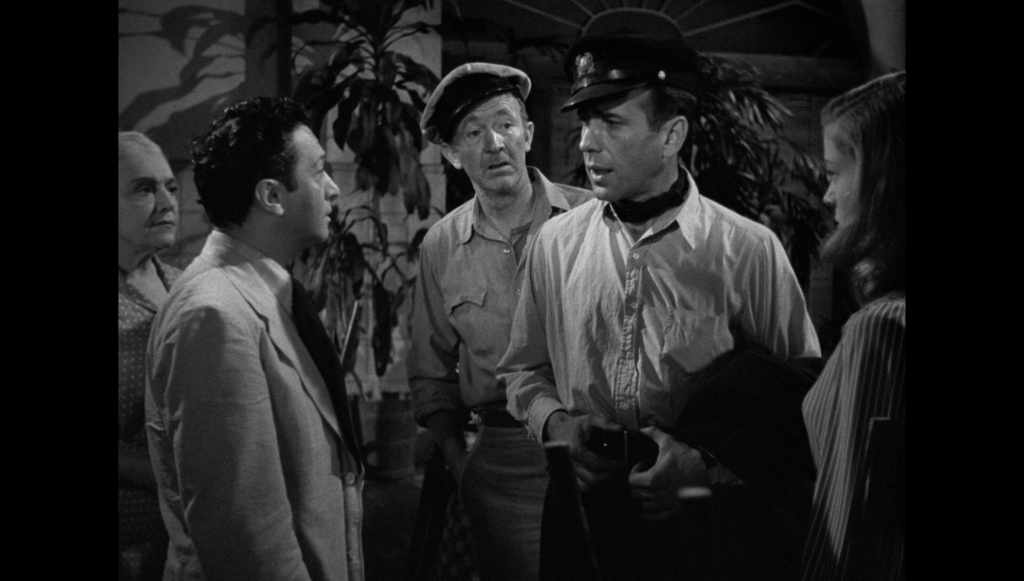 For the most part, Warner’s restoration of To Have and Have Not is phenomenal. Blacks are inky and rich, and contrast throughout the entire film’s presentation is excellent. Details are present in almost every scene, and although there are quite a few softer shots peppered throughout the film, it is mostly sharp, and delightfully covered in a sometimes quite heavy layer of film grain. My only real complaint is that on occasion I noticed some odd artifacting during a shot here or there later on in the film, but I feel that it does not make for an overly distracting viewing experience. Warner always treats their classics with the utmost of respect, and To Have and Have Not is a mostly rock solid visual presentation. 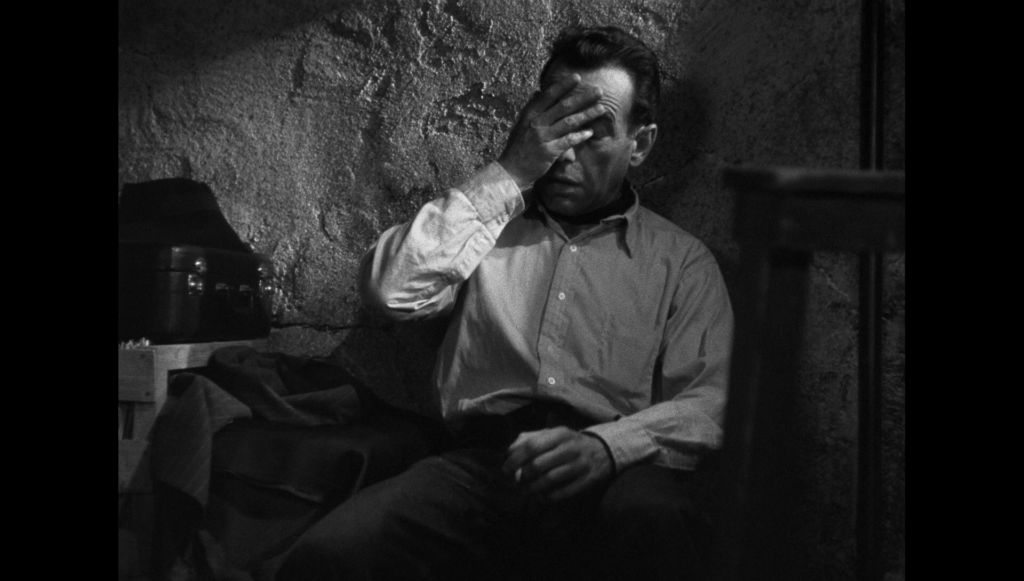 To Have and Have Not is presented in mono using a DTS-Master Audio 2.0 soundtrack. The film, due to its origination as a mono production, is fairly limited in its presentation. There is no trace of distracting audio distortion or damage, and all dialogue and sound effects are presented clearly for all to hear throughout the film.

To Have and Have Not has been released on Blu-ray by Warner Archive in a traditional blue keepcase. The front artwork recycles promotional art used for previous DVD releases of the film, and features Bogart holding Bacall under the film’s title and the Warner Archive collection banner. The back art feature a paragraph about the film, a list of special features, credits, technical information, and a few shots from the film. Nothing too crazy here. 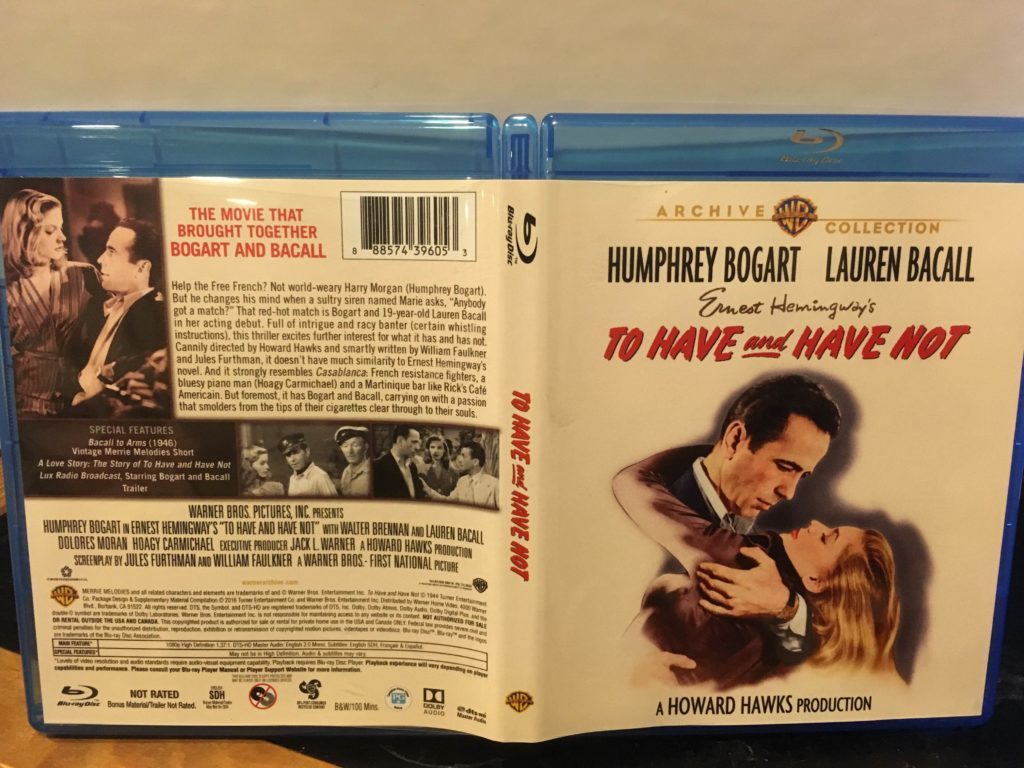 Bacall to Arms – a Merrie Melodies short that was released by Warner, that mocks not only the theater going experience, but the film’s more intensely romantic scenarios in a hilarious manner.  It ends in a fairly racy manner, but hey, that’s 40s cartoons for you.

A Love Story: The Story of To Have and Have Not – this feature, in what may be a defect of some sort, is identical to that of the trailer. I will reach out to Warner Archive for more on this situation. 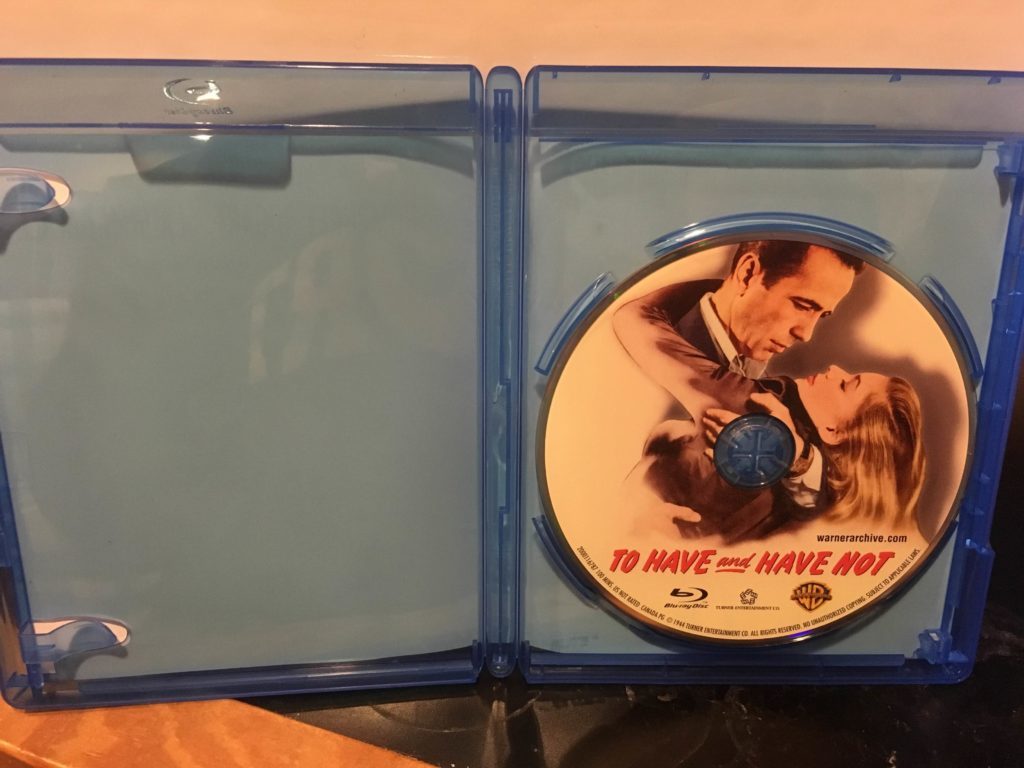 Trailer – a promotional clip that establishes the film’s major plot points and cast over two and a half minutes, presented from a rather rough looking print scan in high definition.

Lux Radio Broadcast – an hour long, feature length radio adaptation of the story of To Have and Have Not, starring both of the film’s leads in their original roles. The adaptation is abbreviated, but entertaining, complete with all of the charms of 40s radio.

With standard packaging, and a small, but entertaining selection of extras, especially for a Warner Archive release, I felt this release is adequate, but not crazy in this department. 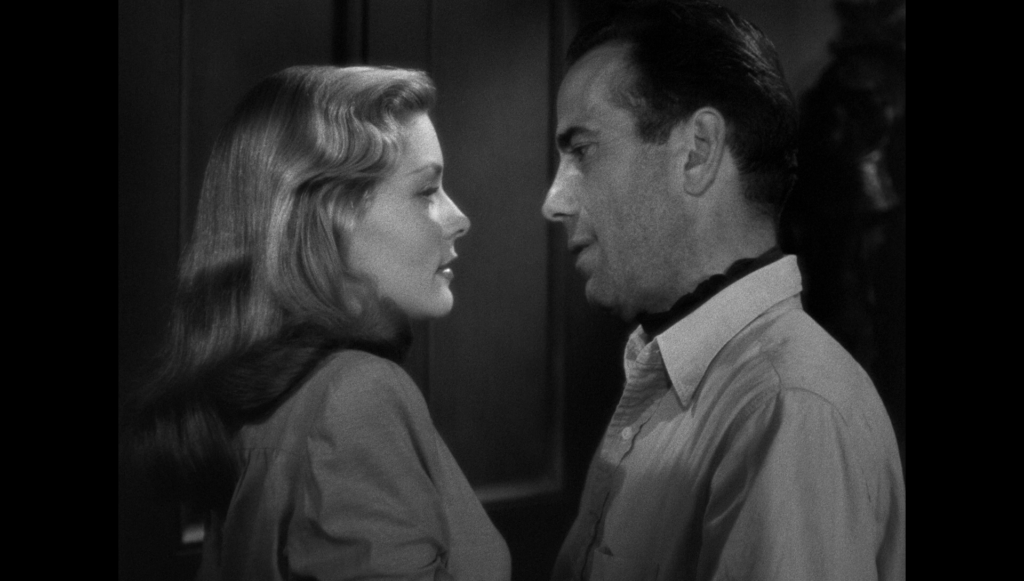 You can’t beat Bogey and Bacall, one of classic Hollywood’s true power couples, especially when a director like Howard Hawks is behind the camera. Their excellent performances and on screen chemistry lift their characters above their formulaic and somewhat uninspired origins to fantastic heights, singlehandedly saving the film from being a merely average experience. Paired with an excellent video and audio transfer to home video by the talented team at Warner Archive, as well as a small selection of relevant and interesting features and fairly standard packaging makes To Have and Have Not an excellent choice. Recommended.