I am not a huge Quentin Tarantino fan. I’ve seen nearly all of his previous films, and while they’re usually pretty entertaining, I generally feel that they’re incredibly violent, almost savage movies. He curses too much, steals shots from other movies without any hesitation, and just all around makes kind of cartoonish versions of classic cinema. Yet, at the same time, I have a tough time calling them bad films. Each of his eight films is overflowing with passion for cinema that is unbelievable, and are all really well made, polished films. The editing is usually interesting, and the films are well paced. I just don’t vibe too well with them. 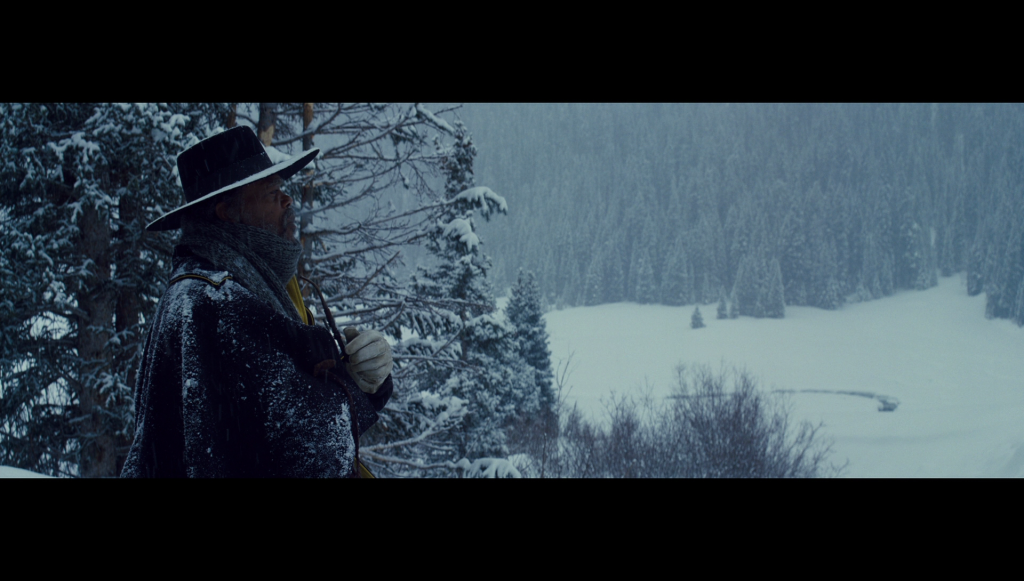 Considering that I’m not a huge Tarantino fan, I absolutely loved The Hateful Eight.

The Hateful Eight is the story of eight people, all cooped up together in a small haberdashery during a ferocious blizzard in the Midwest sometime after the Civil War has wrapped up. The cast of characters includes two bounty hunters, a criminal, a cowboy, a hangman, a Mexican, a sheriff, and an old Confederate general. Stuffed into a small room together they push each other to their limits, reopening old wounds, getting at each other’s throats, and in general, just being angry, paranoid people.  It becomes clear that some in the room is trying to help free the criminal who came in with the bounty hunters, and soon it becomes a classic “whodunit” style movie, where characters drop like flies, and the blood flows as we get to the bottom of the mystery. 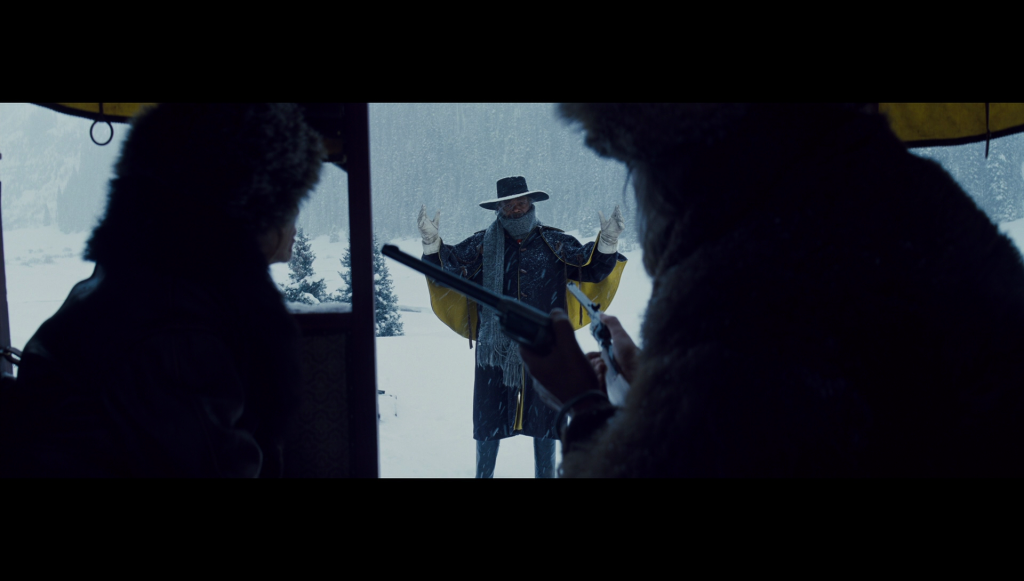 As far as the story goes, it’s not exactly the most inventive plotline. But the beauty behind this beast of a film comes from its brilliant casting and script. Tarantino’s decision to fill the cast with talented players such as Jennifer Jason Leigh, Kurt Russell, Tim Roth, and Samuel L. Jackson pays off in dividends. It’s like he assembled the dream team of character actors, pissed each one of them off and set them against each other in an isolated room. You can tell that each and every one of them truly enjoyed becoming their individual characters. The script, while still full of Tarantino’s signature cursing and racial slurs, is funny, dark, and tackles racism in a typical Tarantino cartoonish manner. The twists and turns of the mystery in the haberdashery are so engaging, that it transcends the traditional Tarantino dialogue issues, and becomes something truly special.

As far as the rest of the film goes, the film, as Samuel L. Jackson’s character says in the movie, slows it way, way down. With a runtime of 168 minutes for the standard theatrical cut, Tarantino and his editing team take everything slow. Characters are even developed in a satisfying way, with conversations running longer and longer as the film goes on. The typical cartoonish violence that Tarantino loves to use is present in moderate amounts, but rather than using the violence to drive the pace of the film, they’ve crafted a film in which the story adequately develops itself and justifies such intense violence. It does become at times a bit self-indulgent, with Mr. Tarantino stepping in as a slightly obnoxious narrator, and the lack of intermission that was featured in the 70mm roadshow release really makes the second half of the film feel slightly stinted in terms of pacing. 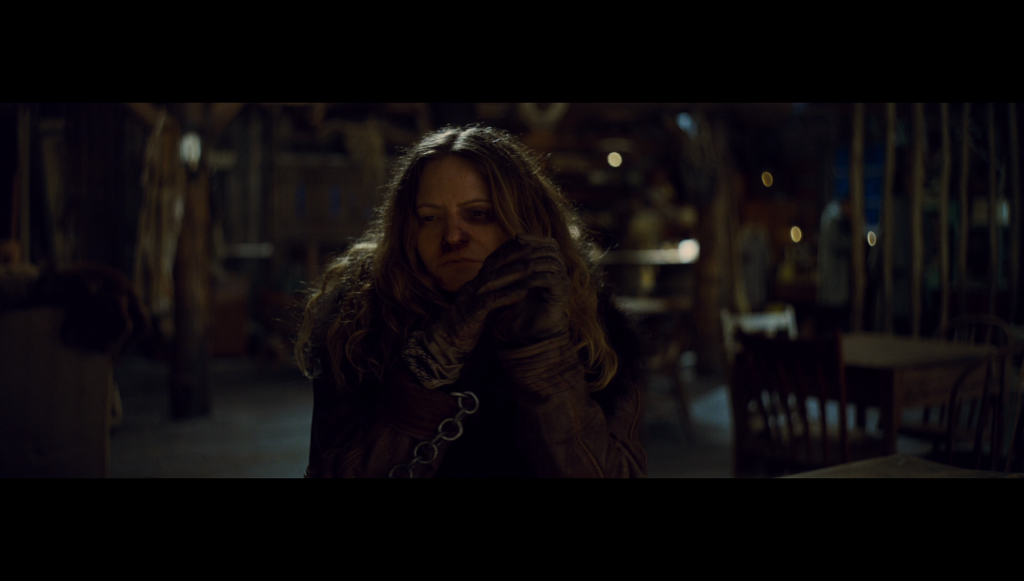 The film’s Academy Award nominated cinematography, shot by Robert Richardson in Ultra Panavision 70, is beautiful. The wide shots, especially the exteriors, are breathtakingly gorgeous. The majority of the film is shot indoors, and while many will cry out against Tarantino’s decision to do this, he uses the 2.76:1 frame brilliantly. Close ups are incredibly tight and intense, and other frames are so busy, with grandiose split focuses and what not, that there is almost always something engaging in the frame. The Academy Award winning soundtrack, composed by legend Ennio Moricone, is brilliant. It’s light, yet intense, amplifying all of the emotion and energy of the film in just the right ways.

Overall, I find The Hateful Eight to be a slower, more mature turn from Quentin Tarantino and his creative team. The picture is well acted, well shot, and extremely satisfying and entertaining. It may not be for everyone, but it sure did win me over, as it was by far my favorite film of 2015.

Shot on 65mm film with Ultra Panavision lenses, and photochemically timed for release on 70mm film for limited release, The Hateful Eight’s roadshow presentation was scanned and prepared in 4K for theatrical presentation in case the 70mm projection equipment failed. Without any additional info to go off of, it is mostly likely that the standard theatrical cut was also sourced from this 4K master. The film is presented in 1080p on Blu-ray, with the full 2.76:1 aspect ratio maintained for home video. 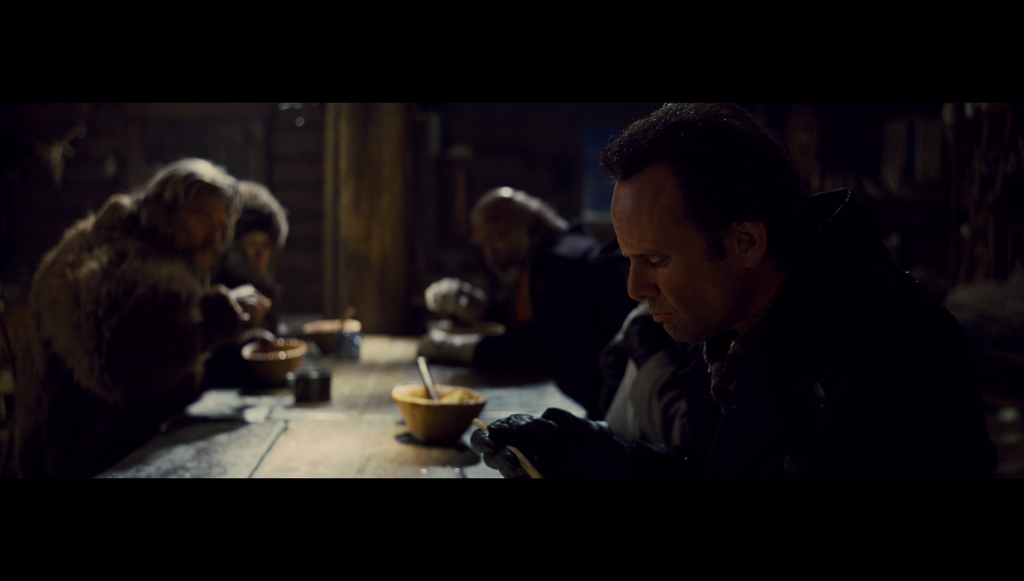 The Hateful Eight is a lovingly crafted film from start to finish, with gorgeously crafted wide shots, and brilliantly tight close ups. Detail is present in spades across the entire 2.76:1 frame. I was lucky enough to see a 70mm presentation of the roadshow version of the film in January, and I can tell you, the color is nearly dead on to what I saw. The blacks are perfect, and contrast is excellent across the entire 168 minute run time. 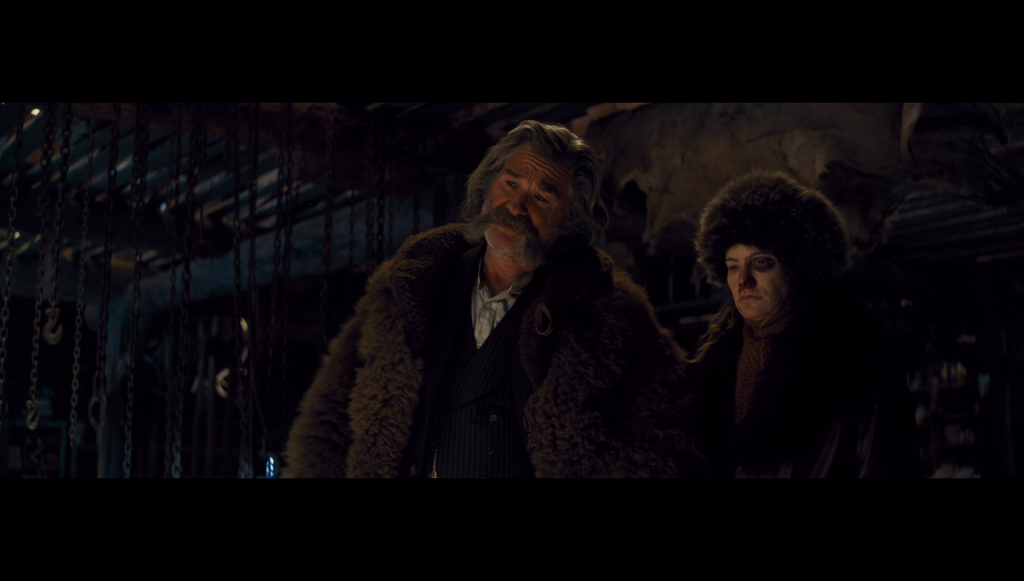 The picture is 100% damage free from start to finish, and although I caught a little bit of gate weave during the early sequences of the picture, its impact is so minimal that I have a hard time counting that against it. The 65mm image is grainy, and slightly soft because of the Ultra Panavision lenses, but it comes off as incredibly authentic in 1080p. This is a beautiful picture, and it is presented as such.

Mixed and prepared for screenings in 5.1 DTS 70mm surround sound, The Hateful Eight is presented on Blu-ray with a 5.1 DTS-Master Audio soundtrack. 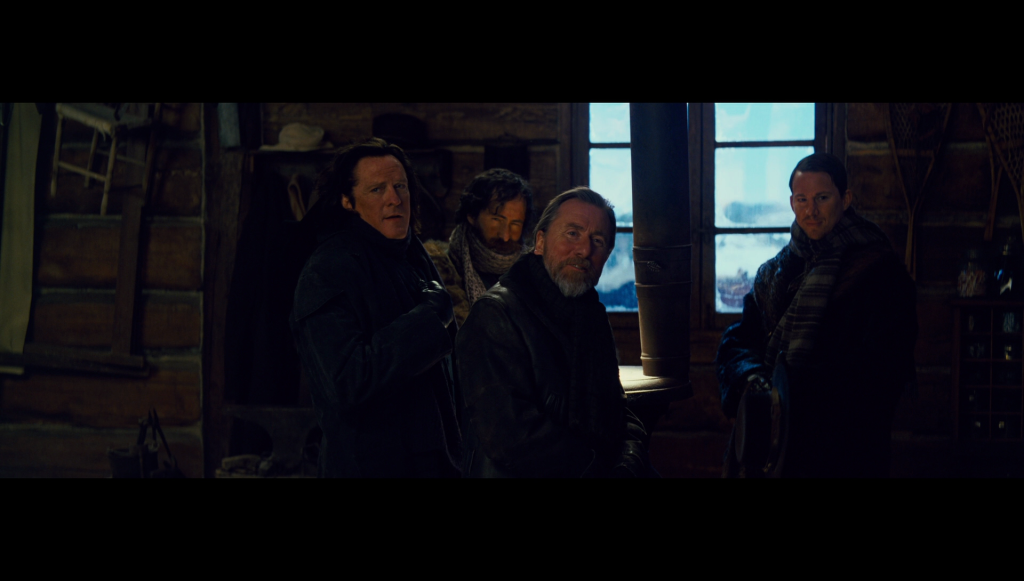 The Hateful Eight will never impress in a way that, say, Star Wars will on Blu-ray. It isn’t loud, or bombastic, but stellar in a completely different way. For this film, Tarantino and his sound mixers expertly use sound panning. Horse carriages move across the soundstage, and even into the surrounds. Morricone’s score drifts brilliantly through the surrounds and fronts in a comfortable way. Dialogue moves with the characters in the frame, in a very natural, very old fashioned sort of way. Gunshots are loud, but incredibly satisfying, with a lovely bit of subwoofer action. Overall, the mix is top tier, but in a mostly subtle way.

The Target exclusive edition of The Hateful Eight is nearly identical to the standard release, except that it has a lenticular slipcover. The film is presented in a tradition keepcase, with a picture of all eight of our main characters composited against the haberdashery in the background. The slipcover features the same exact artwork, except that the lenticular design lends a depth of field effect to the picture, which is pretty nice. The back artwork features your traditional Digital HD info, a paragraph about the film, and some credits and technical info with a couple pictures. Nothing too crazy, but it is a nice set. 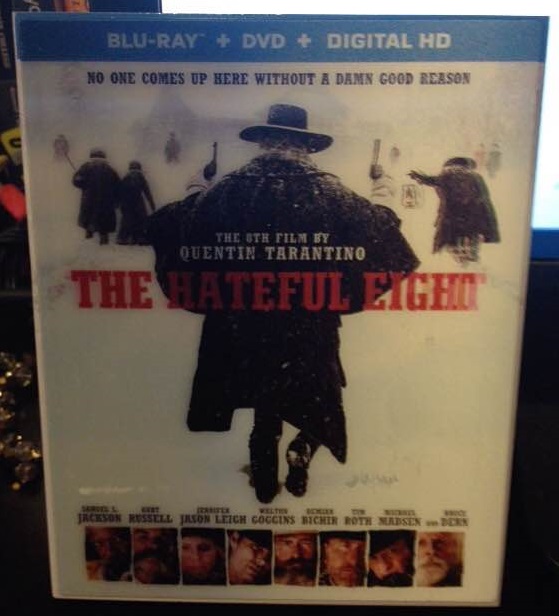 As for special features, the main Blu-ray comes up pretty short with only two features. The Target exclusive edition however, features a bonus DVD titled The Hateful Eight: an Inside Look at Quentin Tarantino’s 8th Film.

Beyond the Eight: A Behind the Scenes Look – a five minute piece, where Tarantino and the actors talk about the plot of film. Your typical pre-release press style of video. Interesting, but nothing really enlightening about the film. 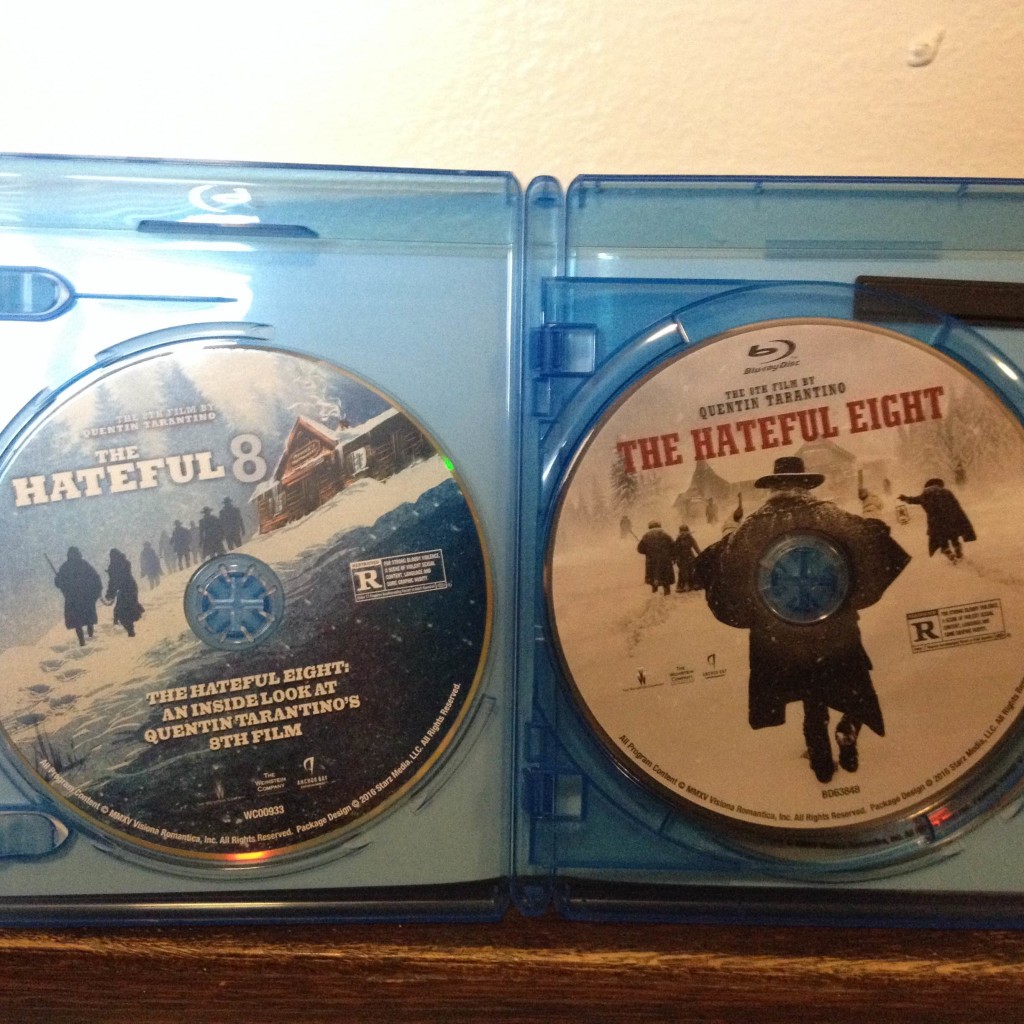 Sam Jackson’s Guide to Glorious 70mm – Samuel L. Jackson gives a bit of history behind the idea of the roadshow release, with various members of the production including Quentin Tarantino and cinematographer Robert Richardson giving their bit on the film’s use of the 70mm. The feature takes a brief look into the process that Panavision went through to revitalize the Ultra Panavision 70 lenses. This was released to Youtube in the months leading up to the film’s roadshow release, but is still worth it just to hear Jackson’s enthusiastic narration. 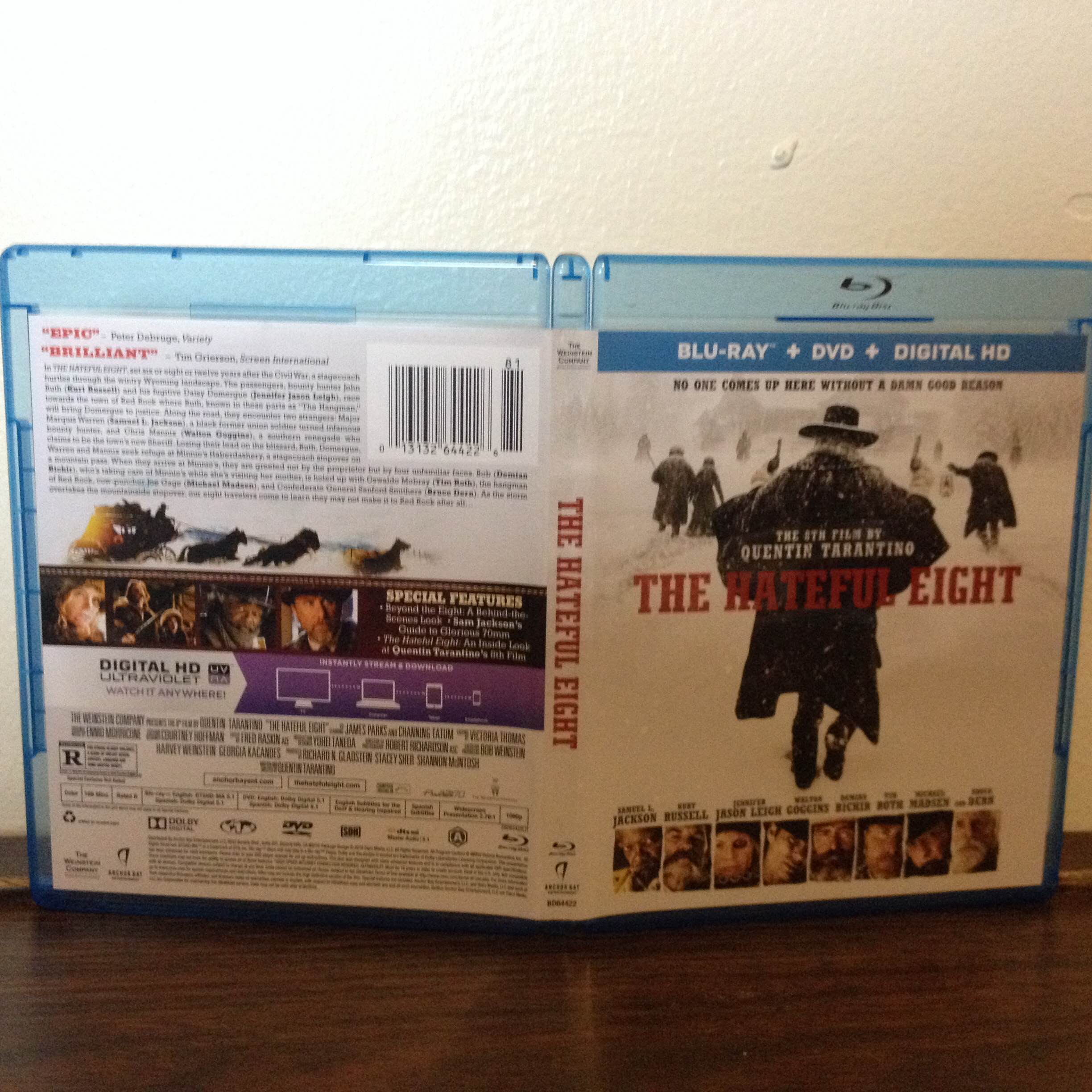 The bonus DVD included is essentially a half hour long version of Beyond the Eight. For half an hour, you get to hear the main actors talk about each other, and their performances, and their favorite parts about playing those roles. They talk in an endearing way about each other, and make the production seem like it was a really good time. It feels like a half hour long press piece, but for what it is, it isn’t boring, or shallow. I just wish that they could have found a way to stuff it into the Blu-ray, rather than include it on a separate disc.

Tarantino has never been one for special features, and it shows. The material included in the standard Blu-ray is sparse, and the extra disc included with the Target Exclusive Edition doesn’t make it much better. The packaging however, is pretty nice. Nice enough to make me glad I’ve got it. 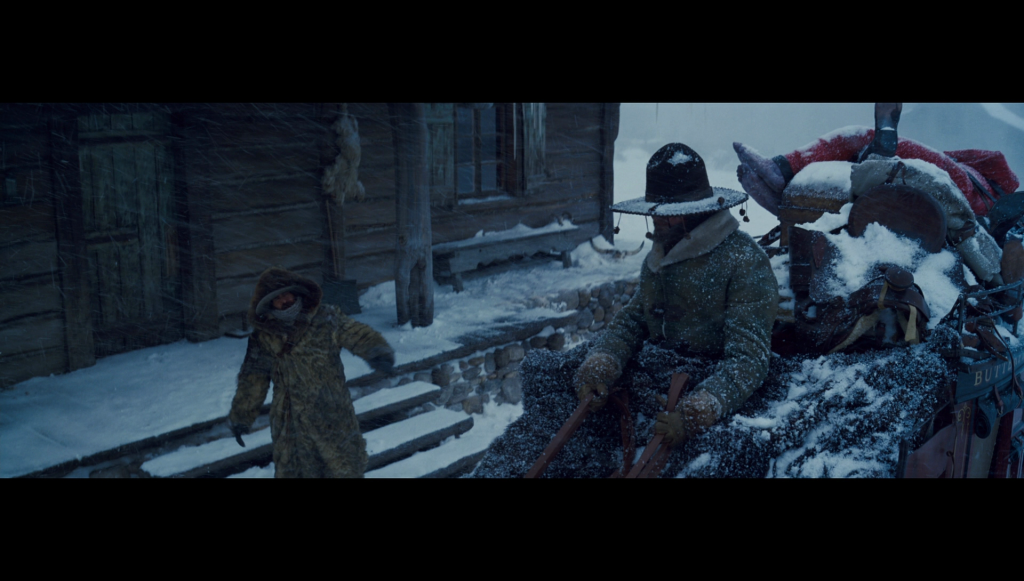 The Hateful Eight is a slow, tense movie. It relies heavily on long conversations, and brutal confrontations between our cast of eight. The film is written in an engaging and entertaining way, proving to us that Tarantino can slow down, and properly develop his characters in a way we’ve never quite seen from him yet. The standard theatrical cut is a little diminished from the 70mm roadshow edition, but since it’s all we have, it’s still a mostly incredible movie. The Ultra Panavision 70 photography shines on Blu-ray, and the soundtrack matches it beat for beat in terms of excellent mixing. The special features, even with the Target Exclusive edition, are pretty weak, but the exclusive lenticular slipcover is very nice. Overall, this one is a must have, especially for fans of 70mm.