It Happened One Night, directed by Hollywood legend Frank Capra, is a film of legend. A low budget affair, shot quickly in 4 weeks with a hasty crew, and a less than pleasant lead actress by the member of then independent film studio Columbia, no one really thought much of it. Its premise, that in which two single,troubled individuals meet per chance on a bus, had been tried a few times before by different studios, and each time was met with disaster. This one, however, was different; this one had the power of Frank Capra, who according to accounts of the production, had a great time making the movie.

He loved working with Clark Gable, and even though star Claudette Colbert stuck up her nose at the picture and made production difficult, the synergy that Capra’s team had with one another made for an exciting production. After all of the trouble they had to go to, their efforts paid off. Thier little bus picture romance became a smash success, and in 1934, became the first ever film to win the big five Academy Awards – Best Picture, Best Director, Best Screenplay, Best Actress, and Best Actor.

It Happened One Night tells the story of troubled news reporter Peter Warne, played by Clark Gable at his most charismatic, and his chance encounter with spoilled wealthy heiress Ellie Andres one night on a bus to New York City. We find our two characters in tough spots; Peter has been fired due to his raging alcoholism, and Ellie has just escaped the overbearing clutches of her father after marrying a man that he didn’t approve of. Her sheltered ways leave her helpless to the ways of the common man’s world, and seeing that, Peter offers to help her reach her destination. Coming from polar opposite ends of the spectrum, they clash, and together they learn to work together in their cross country journey, and in the end, they fall in love, against their better judgments.

If this sounds like a story you’ve heard before, its because it probably is. It Happened One Night revolutionized the concept of the romantic comedies, coming into so much success in its day, that it pretty much inspried a huge genre of pictures that still exists today. Where It Happened One Night succeeds, and its successor doesn’t however, is in plain, raw chemistry. Our two leads, Clark Gable, and Claudette Colbert, are absolutely brilliant on screen, playing off of each other so well, that its hard to feel anything but pure joy when watching the film. The script, written by Robert Riskin, is so funny and heartwarming, that although the story is rather predictable, you simply just don’t care. To sort of quote one of the directors from the the included documentary, “We know they’re going to end up together. Its not about that, its about the dance.” 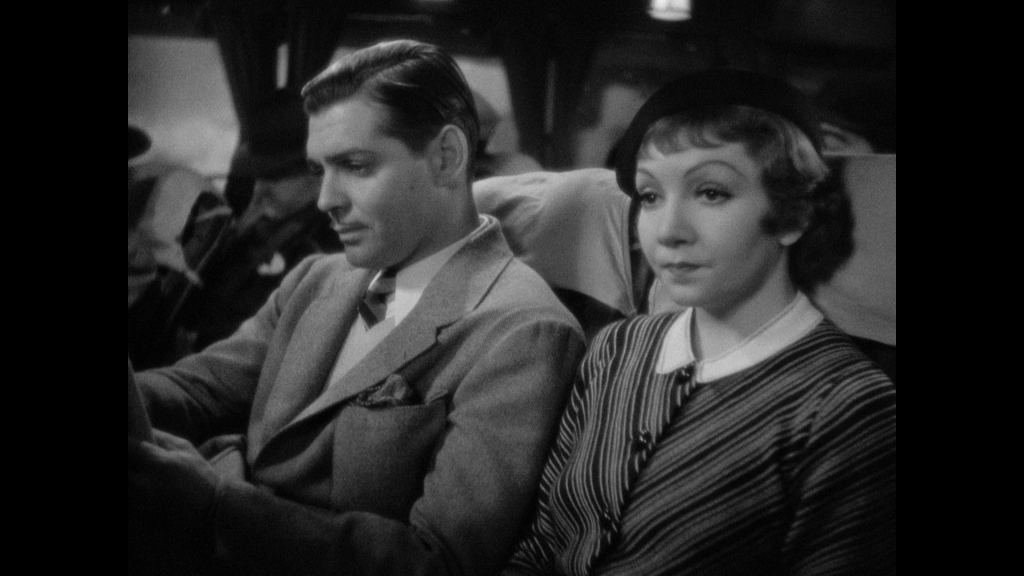 Capra’s movies are always fairly lighthearted, and always focus on a good message, this one is no different. Love or hate his idealism, his movies are technically proficient and usually well made. It Happened One Night is not just one of his best movies, but one of the greatest romantic comedies ever made, one whose influence is so easily identifiable in movies today, that you can’t help but smile. It does everything right, and while it may not seem overly ambitious or technically brilliant on the surface, like most Frank Capra movies, its what’s below the surface that makes this one special. I encourage everyone, not just Capra or classic movie fans, to give this one a shot.

It Happened One Night was shot in Academy Ratio 1.33:1 on 35mm nitrate film negative in 1934. In 1934, films were of course, still shot and released exclusively on film material. The modern process of making a release print requires that if you are to make a photochemical film print, that you do not, by any means, make release prints from the original negative. That process of course, did not exist in 1934, and as a result, film prints were generally struck from the original negative for theatrical exhibition. Because of this, the negative was either too worn out, or too damaged to be used as a source for the 4K restoration of It Happened One Night. That restoration is, of course, presented here in pillarboxed 1.33:1 aspect ratio, in 1080p. 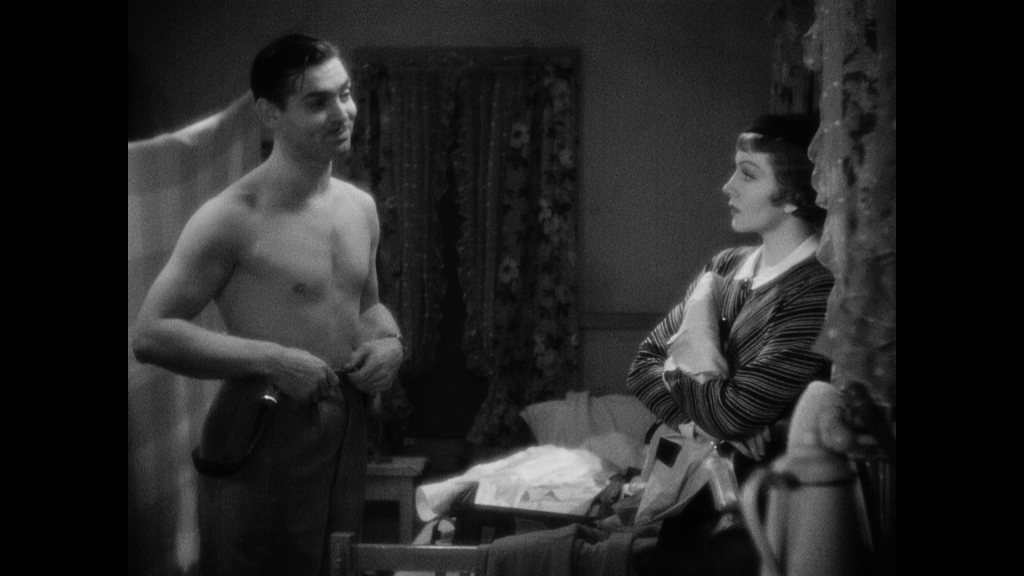 They did, however, use the next best thing available, a fine grain studio master print that was struck from the original camera negative at an earlier date, in conjunction with an original 35mm nitrate print. As a result, most of It Happened One Night looks incredible. Damage and density issues are nowhere to be found, and grain, while thick, resolves naturally and no evidence of tampering is evident. The only exceptions to this statement are, of course during photochemical effects such as optical transitions and fade outs, with which the grain thickens quite a bit. 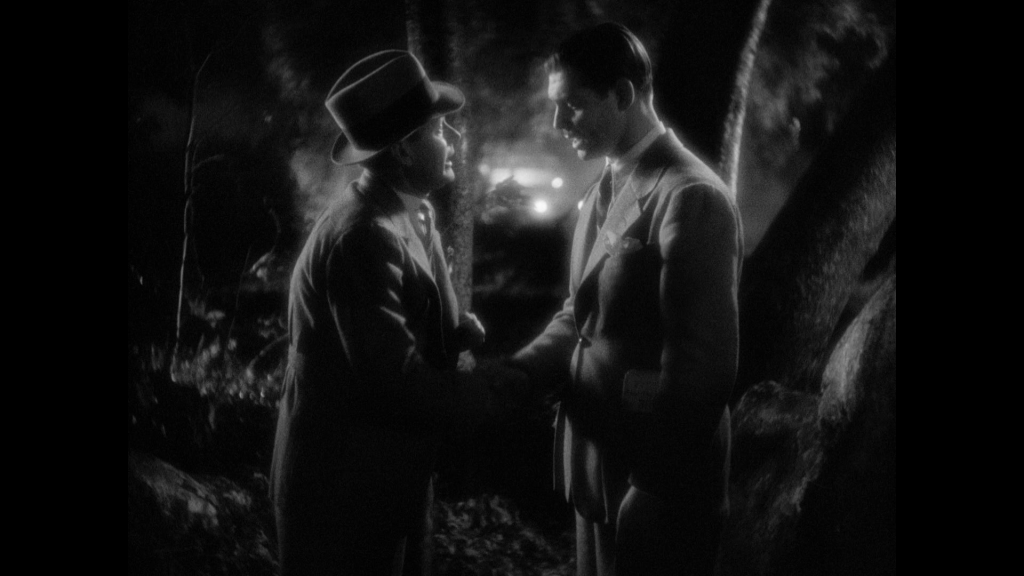 Much of the movie is sharp, and detailed. Close ups of our two leads tend to show amazing amount of facial detail, and wide shots for the most part, look great. Blacks are inky and rich, and the contrast throughout the entire print is fantastic. Many shots, thanks to the quality of the lenses uses, and the negative stocks available at the time tend to land a little bit on the softer side of the spectrum. The select shots that were sourced from a 35mm nitrate print generally look terrible, with thicker grain and drastically lower amounts of detail. Luckily, these shots are far and few between, and the majority of the movie looks great, especially considering that not a single shot in this 4K restoration was sourced from the original camera negative. Overall, Criterion’s visual transfer of It Happened One Night looks clean and for the most part, fairly detailed.

It Happened One Night was recorded during the early days of sound film, and as a result sounds pretty boxy and limited. Criterion’s Blu Ray features a 1.0 LPCM mono soundtrack for the film, and all considering its age, it sounds excellent. There are no pops or clicks to be heard, and the hiss that generally accompanies films from this era is nowhere to be found.

The sound design of the film wonderfull accommodates all of the limitations of the era. No one character overlaps another in a distracting manner, and sound effects come off nicely. The score is balanced perfectly with the dialogue in the mix. If I had anything to complain about, a few lines sounded mildly distorted, and were difficult to understand in their delivery, forcing me to rewind, and listen to it again. Other than that, It Happened One Night sounds fantastic.

It Happened One Night is presented in a standard Criterion Collection clear plastic keepcase, with a spine number of 736. The cover art features a screen cpature from one of the film’s most delightful moments, paired with info about the film, its features, and technical information on the back. The film features reversible cover art, with a lovely capture of our two leads, showing their electric facial expressions. You can almost reach out and touch the chemistry that’s in the artwork, I love it. 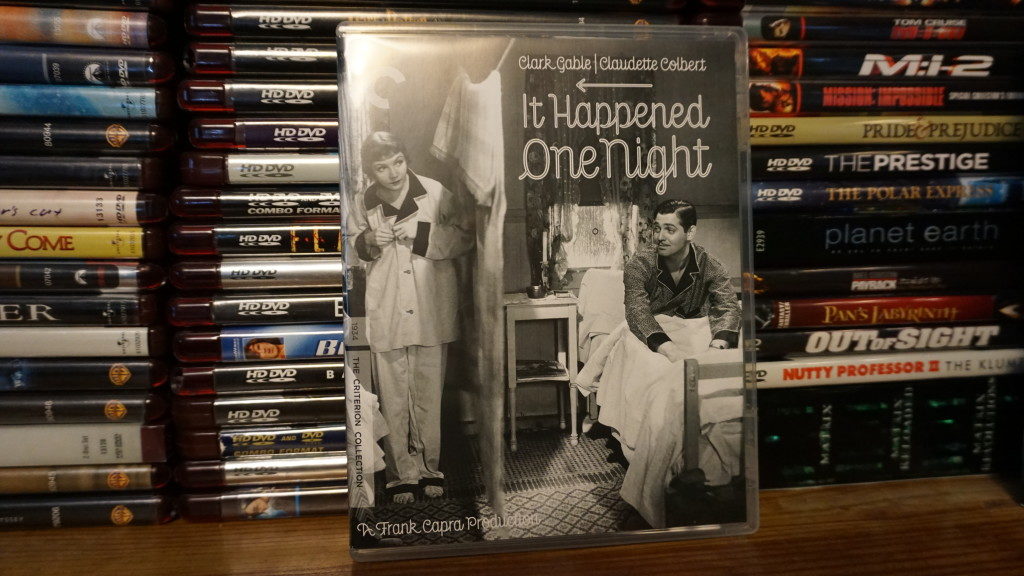 As for special features, in typical Criterion fashion, It Happened One Night is loaded with them.

The first of these features is a piece titled, “Screwball Comedy?” in which critics Molly Haskell and Phillip Lopate discuss the nature of this film, and other films, in relation to the idea of the screwball comedy, and what makes these movies so funny and important. It makes for a pleasant conversational discussion, and is fairly interesting to sit through.

Next up on the chopping block is a short conversation with Frank Capra Jr. on his memories of his dad making the film. He talks briefly about the issues they had making the film, and how much fun his dad had on the production, as well as various other things. Its clear that Frank Capra Jr. had a good time recalling these memories, and as such, the coversation is engaging, and informative. 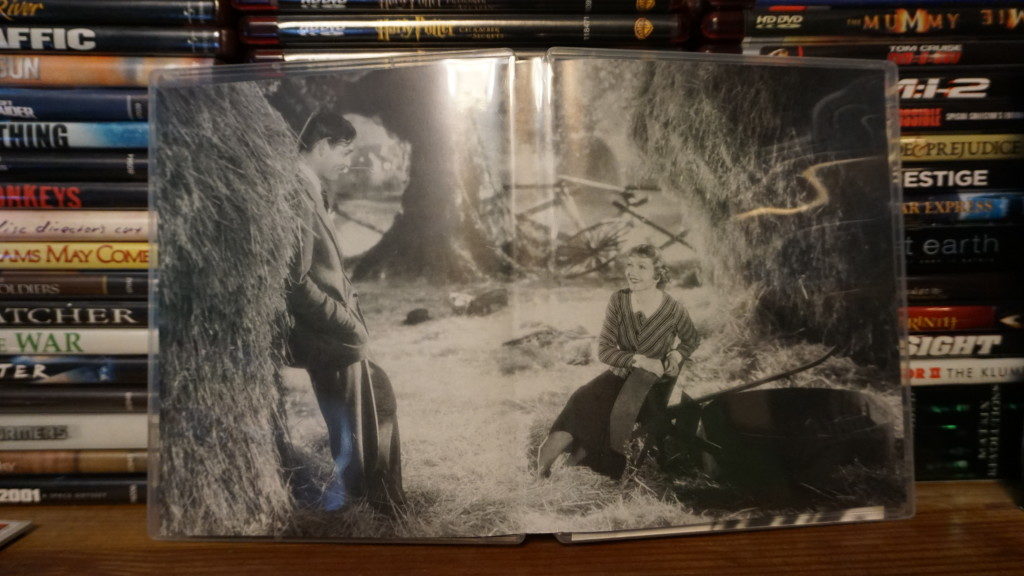 Also included is two television features, in standard definition; a documentary titled, “Frank Capra’s American Dream,” which is narrated by Ron Howard, and goes through each major period of Capra’s career in detail. Tons of great filmmakers and actors and actresses participate, and there is just an overwhelming amount of detail and love for Capra’s body of work. This one is a great retrospective, and well worth the hour and a half runtime if you appreciate Capra’s body of work. The second one is from the early 80s, which is the American Film Institute’s Tribute to Frank Capra. This one, much like any AFI tribute, features many actors and actresses coming up and speaking about Capra’s legacy, and his hosted by one of my all time favorite actors, Jimmy Stewart. This one is pretty standard fare, and a little sentimental, but very entertaining. 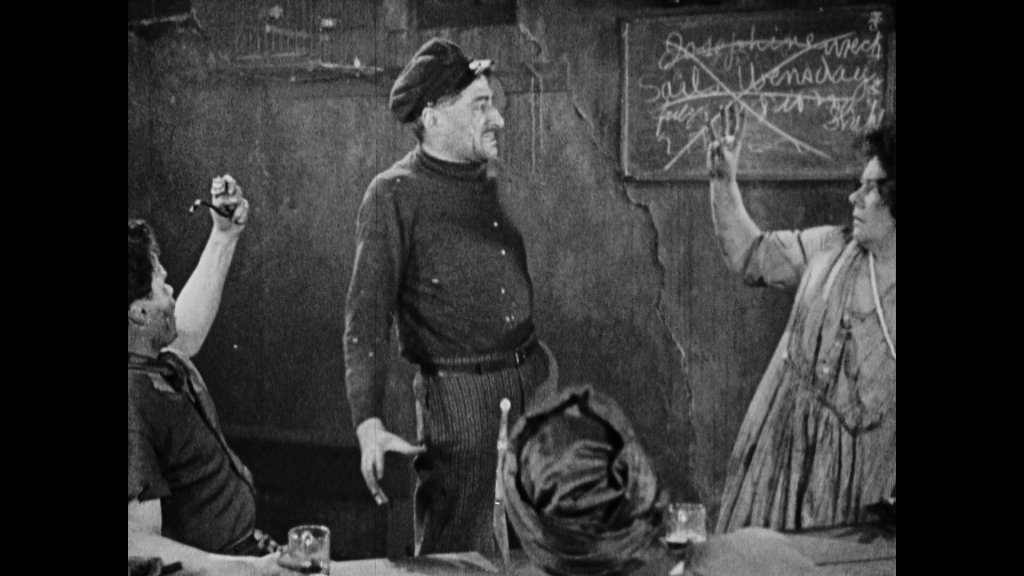 Finally, we get the film’s trailer, and a digital transfer of Capra’s first silent film, “Fultah Fisher’s Boarding House,” which dates back to 1921. The short silent feature is amusing, and runs at a brisk length of 12 minutes. The elements aren’t in great shape, understandably, and there was little effort put into restoring this one, other than a great, newly written score for the feature. For fans of silent film, this one’s alright, but it didn’t necessarily blow me away. 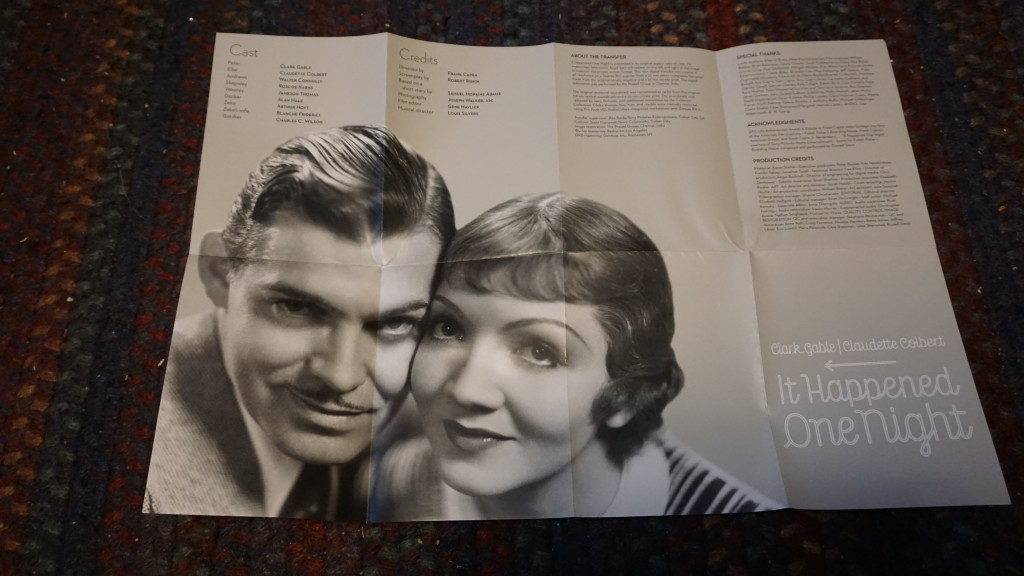 An essay, as well as info about the transfer and production credits are featured on the paper insert included in the keepcase. The essay, written by Farran Smith Nehme, covers the legacy of the film, and why its had such a presence in movie history.

Overall, this one features great special features, and excellent packaging, as is typical of a Criterion collection release. 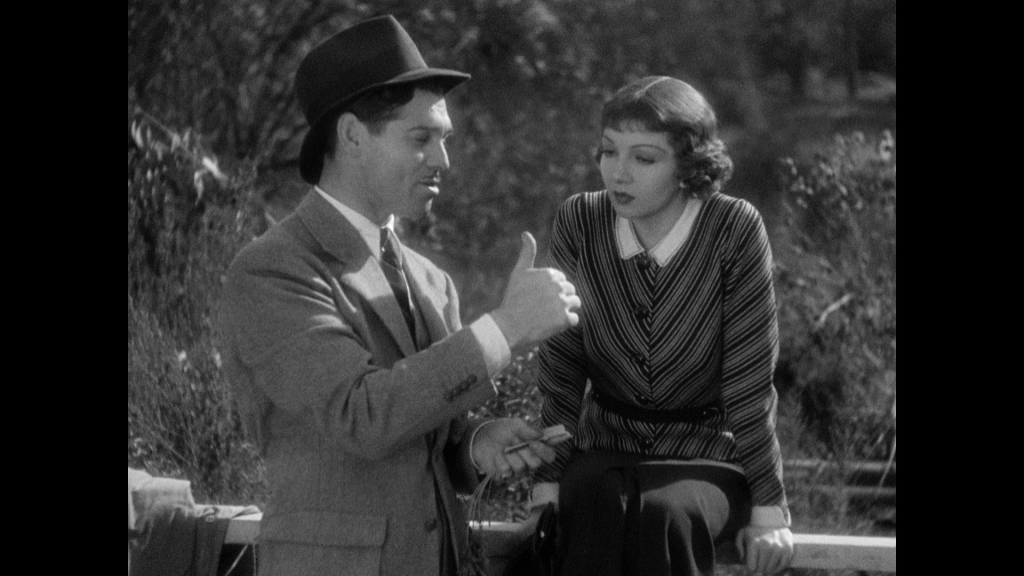 It Happened One Night is charming, funny, and feels as fresh as it did in 1934, in terms of pure romantic chemistry and writing. The movie features Clark Gable, Claudette Colbert, and even Frank Capra and his team at their best. When watching the film, you get the impression that at the end of the day working on this film, and putting it together, was a really entertaining process. The film’s video transfer, while occasionally problematic, is generally fantastic, and the audio’s clarity and mixing is incredible for a film of this vintage 99% of the time. The feature package is fantastic too, and does a great job of endearing you to the legacy of not only this film, but of Frank Capra and his body of incredible work. This one comes with a hearty recommendation.