Full Disclosure Before You Read This Review: I am a massive fan of Halloween. I will not let it affect my judgement…too much.

For years, the Producer’s Cut of Halloween VI: The Curse of Michael Myers has been somewhat of a home media oddity, showing up on bootleg DVDs, torrent sites, and online forums. Finally, with the Complete Halloween Collection being released on Blu Ray last Fall, the Producer’s Cut came to Blu Ray in a studio mastered version with much better picture quality than the previously released bootlegs and fan-cut versions. However, for many collectors with the existing copies of the Halloween movies who do not want to shell out the money for the fairly expensive collection, there was still no way to view this Producer’s Cut at home. However, Lionsgate has bailed those collectors out with a new standalone release of the Producer’s Cut for a mere $7.99 at release day (now at $9.99); well worth it for a film that had previously never seen the light of day.

With over 70 minutes (This has been disputed. Wikipedia says 43, but the official release says 70) of footage not found in the theatrical cut, the Producer’s Cut feels like an entirely different movie at points, and adds a new spin to the Halloween saga which is a treat for fans of the franchise. Starring Paul Rudd in his first major movie role, along with Donald Pleasance reprising his role as Dr. Loomis, the Producer’s Cut of Halloween VI is one not to be missed. If you love Halloween but do not have the collection, I highly recommend going out and spending the money for the full collection, as it has dropped in price since release and will inevitably be on sale in October. Otherwise, I recommend at least shelling out the $8 for the standalone release of the Producer’s Cut. You will not be disappointed.
PICTURE QUALITY
In the past, the Producer’s Cut did not have great picture quality because it was coming from hobbyists who were taking low quality source footage and creating their own personal releases of this film. Now, with the studio involved, the picture quality has increased dramatically, and based on other releases from the series, it is one of the most impressive. That is not saying a lot considering how bad the transfers of H20 and Resurrection were, but outside of the original three films, this is the best looking picture quality on a Halloween home release. However, it is still no Avatar. This is a mid-90s, low budget slasher film, and the picture quality reflects the budget and importance placed on this film when it was released. It is certainly passable and much more enjoyable than a bootleg, but in darker scenes the colors tend to run into a muddy sea of blacks and grays. 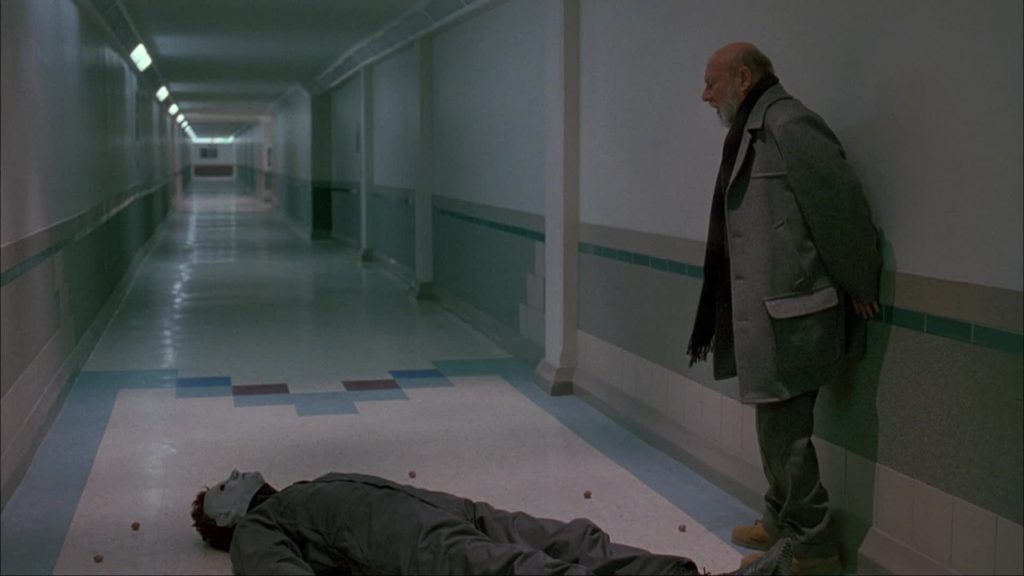 There is a decent amount of grain, which is a good thing for a film in that time period, but at times it becomes too much. Some of this was probably sourced from very low quality materials, and at times it looks as if an official DVD copy would do the film the same justice that the Blu Ray does. However, the better scenes benefit from Blu Ray, and in the end this is a film that was only $8 at release and there is no attempt by the studio to play this off as if it is the latest, greatest visual achievement. For the very low price, the picture quality is just fine, and it is great to finally view an official version of this cut.

PICTURE QUALITY SCORE: 3/5
AUDIO
Halloween VI: Producer’s Cut comes to Blu Ray with a solid 5.1 DTS-HD Master Audio track, a surprise to many who thought that an older, more obscure release like this would not get the full audio treatment that most other releases get. Many collector’s assumed it would get the same 2.0 track that the older Halloween’s all got, like H20 and Resurrection. So, getting this one in the mail on release day and seeing that sweet, sweet “5.1” in the specs on the back was a huge boost for a film for which I had very low expectations. The high pitched theme song sounds excellent on this track, and I honestly do not know if I have ever heard a bloody scream sound so good on a low budget horror release. For under $10, this is a much better option for a Halloween night movie marathon than nearly every other entry in the series outside of the original, II and III, which all received recent remasterings.

The solo bass track, which is non-existent in 2.0 tracks, is so important to horror films to build the tension and get your blood pumping, and The Producer’s Cut nails it. The deep bass sounds truly build a sense of dread and are a great addition to an already outstanding audio track. I had absolutely no problems hearing dialogue over the soundtrack, and the sound mixing was excellent. This is especially impressive considering where this cut could have ended up. For all that the picture quality is a bit lacking, the audio track more than makes up for it.
AUDIO SCORE: 4.5/5
EXTRAS
This is a barebones release. Basically, for under $10 you get the Blu Ray and a digital copy, which is actually pretty cool because most times with a release like this they would skip the digital copy. I can’t complain. For me, getting the Blu Ray of the Producer’s Cut is extra enough. However, if you want more extras, the Complete Collection may better suit your needs.
EXTRAS SCORE: 1/5 (1 point for the digital copy)
OVERALL SCORE: 3.5/5
This is one that is well worth picking up if you are a fan of the series, horror in general, or just a good story. This was a film that was supposed to be one thing, turned into another because of budget cuts and studio interference, and now 20 years later we are getting the first official glimpse at what this film was always supposed to be. Also, it is part of another tidbit of movie history as this was the last film appearance of the great Donald Pleasence. He died shortly after filming concluded, and is certainly a horror icon and great actor in general.
I highly recommend this Blu Ray release, and would pick it up around Halloween when it will probably go on sale.