Halloween is a 2018 American slasher film that was directed by David Gordon Green and written by Green, Jeff Fradley, and Danny McBride.  It is the eleventh installment in the Halloween film series, and a direct sequel to the 1978 film of the same name, thus retconning the continuity of the previous sequels.  The plot follows the post-traumatic Laurie Strode who prepares to face Michael Myers in a final showdown on Halloween night, forty years after she survived his original killing spree.  Jamie Lee Curtis and Nick Castle reprise their respective roles as Strode and Myers, with stuntman James Jude Courtney also portraying Myers.  The film also stars Judy Greer, And Matichak, Will Patton, and Virginia Gardener.

After failing to develop a new Halloween film in time, Dimension Films lost the production rights for a sequel, which reverted to Miramax, which then joined with Blumhouse Productions.  In May 2017, a new installment was officially announced, with original co-creator John Carpenter’s involvement as a composer, executive producer, and creative consultant.

Halloween premiered at the Toronto International Film Festival on September 8, 2018, and was theatrically released in the United States on October 19, 2018, by Universal Pictures, the distributor’s first involvement with the series since Halloween III: Season of the Witch.  The film received generally positive reviews from critic, with many considering it to be both the best Halloween sequel and a return to form for the series; Curtis’ performance was also met with praise.  It has grossed over $253 million worldwide, making it the highest-grossing film in the franchise and the highest grossing slasher film in unadjusted dollars, breaking the record that Scream had previously set, as well as breaking several other box office records.  A sequel is in early development. 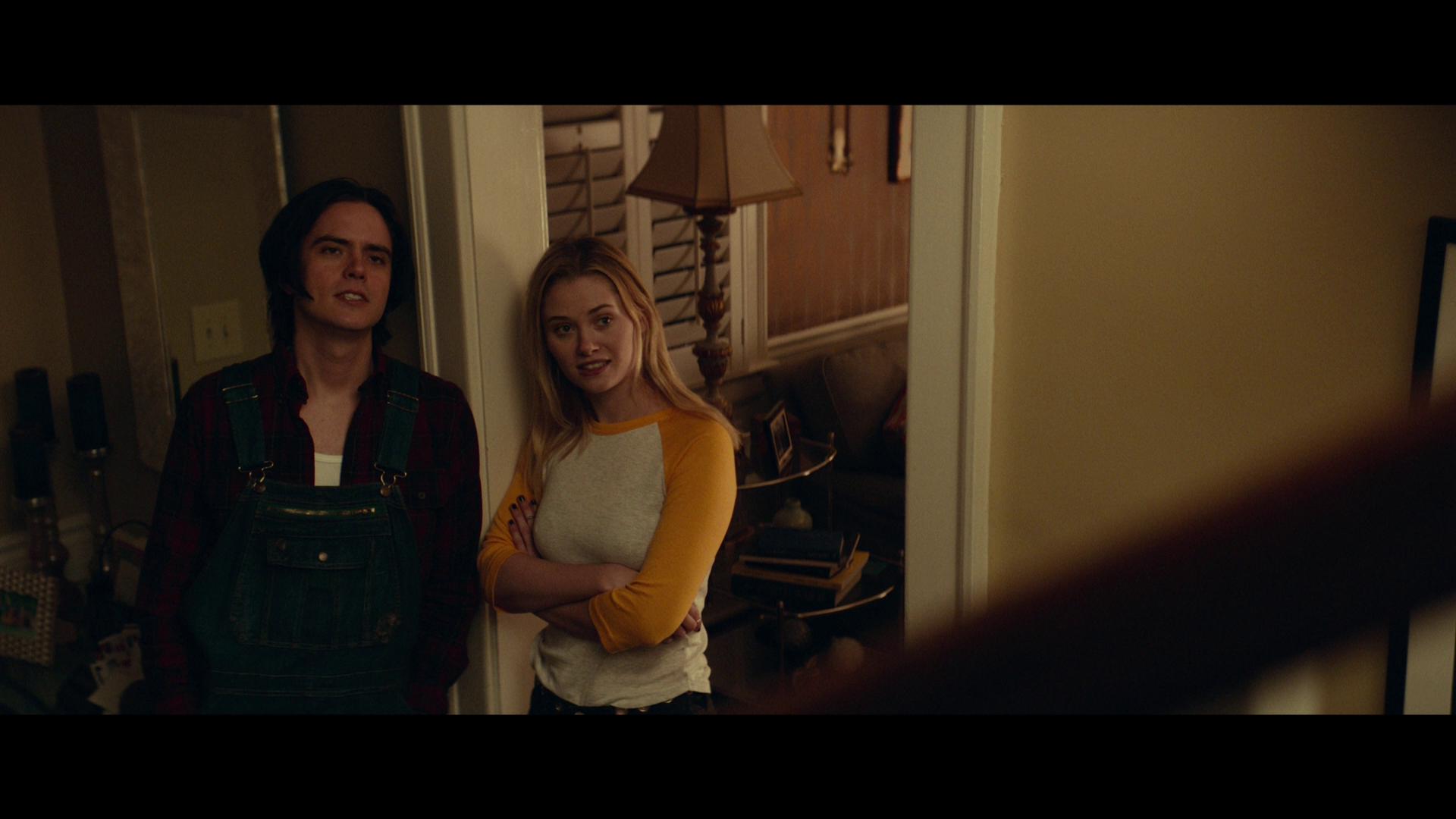 Halloween is a movie, that while it has provided a successful foundation throughout the years with its unique identity, this revisit to the franchise crafts a new film that is all too comfortable, and very familiar and reminiscent of those earlier films within the saga. Providing a structure that’s very comparable, following the mental anguish that’s accompanied Michael for 40 years, the film follows a doctor who has worked and dedicated his life to understanding what caused him to to go crazy and it serves as a considerably key component in this movie. There’s a decent number of nods and references to the original film that Carpenter created all those years ago, and a decent number of left-turned twists that helps this release to not only connect; but, separate itself from that original film. 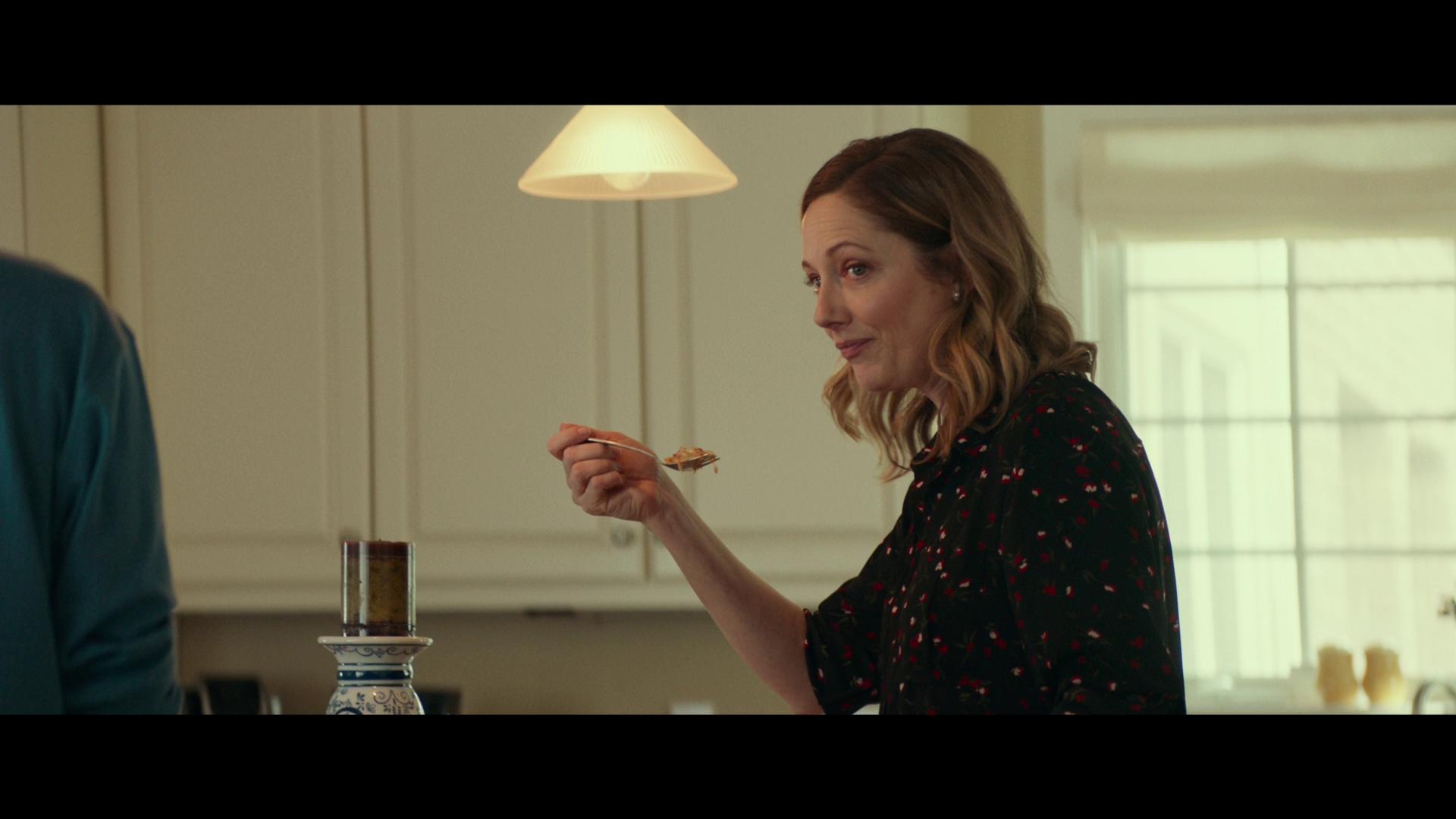 Originally shot on digital, Halloween was reportedly recorded at a resolution of 2.8K, making it an upscaled or “Fake 4K” release. Considering the earlier releases of the franchise have been shot on film, including those that Rob Zombie had produced, I will admit that it is a bit of a disappointment to see that this one didn’t follow suit. However, considering the technological age that we live in, I honestly can’t say that I’m not surprised. The UHD copy offers an honest, clean upgrade from its Blu-ray counterpart with most of the improvements aimed at the sharpness of the presentation, making the finer details of the scenery significantly more distinguishable. Solidifying the color palette a lot more, and the noise management is more improved, there really aren’t any parts that were bothersome or those that offered any kind of visual distortion from what I could have seen. Overall, the visual presentation that’s accompanied with this disc is much better than that of the 4K disc, allowing for it to be another win for the format. 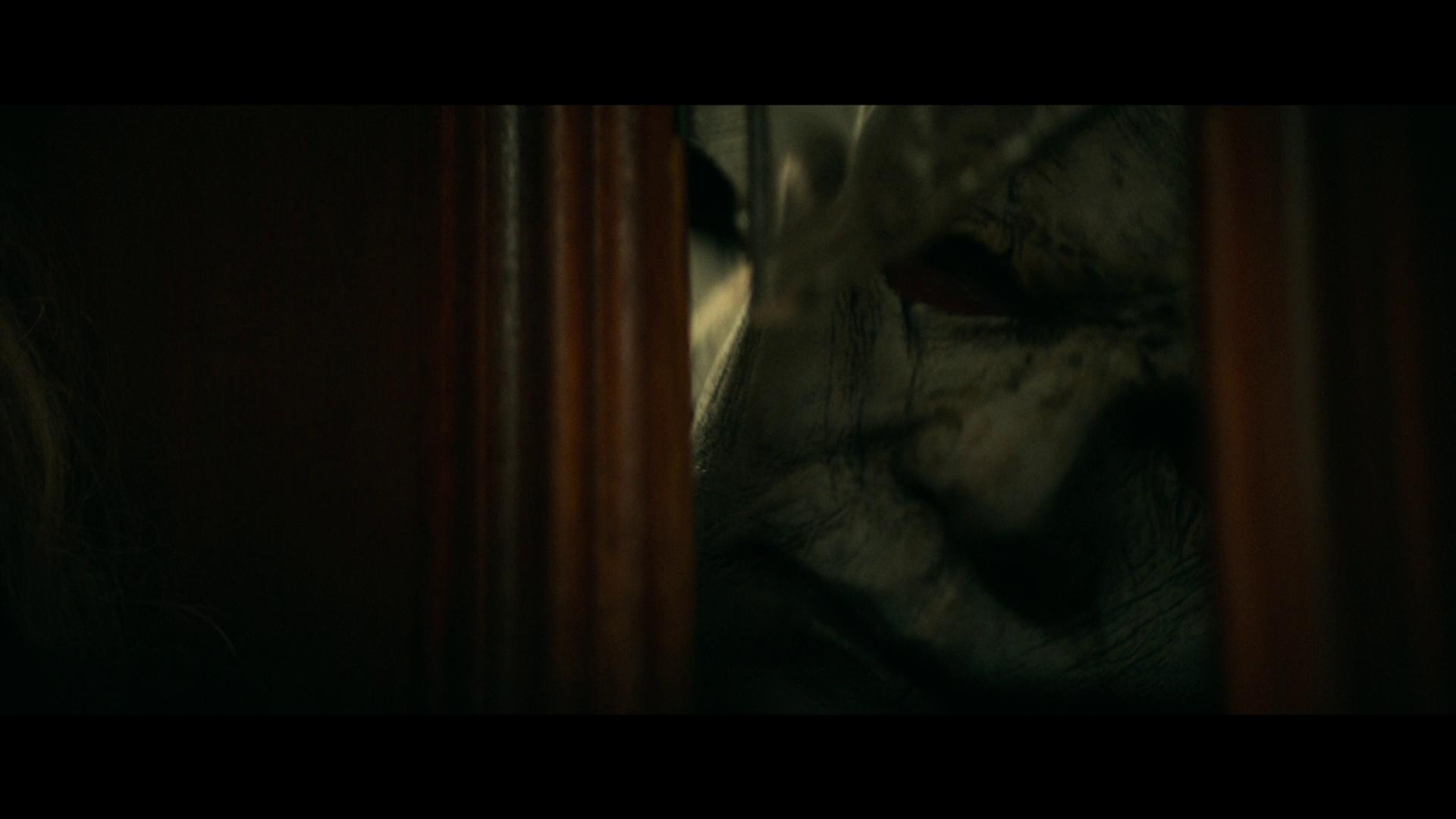 Featuring an English DTS:X encoded audio track, the 4K release of Halloween offers a considerably powerful experience for its viewers that are able to make use of the technology. While it fails to deliver in its use of the overhead or elevation aspects of the audio track, it surely delivers with the other channels that are included. With a full presentation, the audio track is considerably familiar and provides a very well executed reproduction of the audible experiences that accompanied Carpenter’s earlier films. The bass portion of the track is used to compliment the severity of everything that goes on once the film reaches its climax, and the musical score is extremely on point with the general pacing of the movie. Dialogue is spoken cleanly, allowing that everybody be heard and understood without any kind of volume adjustments needed as the spoken parts took precedence over any other aspects of the track. 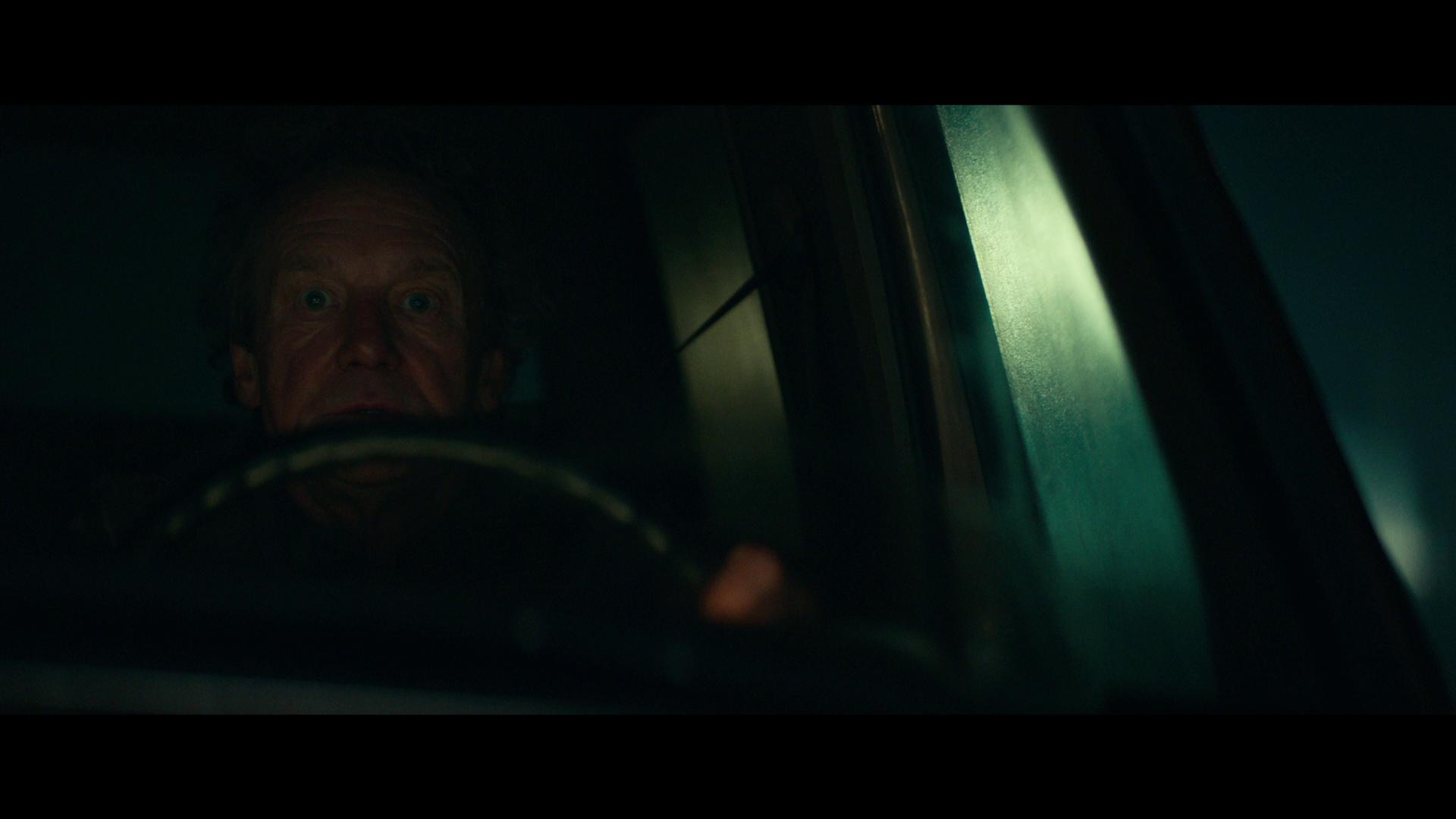 The 4K UHD release of Halloween comes packaged in your standard two-disc 4K UHD amaray case.  Within that case is the standard 4K copy of the movie and the standard Blu-ray copy.  The UHD features Michael in a pose that is different from that of the case art while the Blu-ray only wears the standard release text.  There is a digital copy redemption pamphlet that’s been included, as well as a slipcover that’s been made available in the original pressing of the release that features the same artwork as the case. 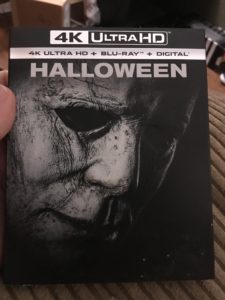 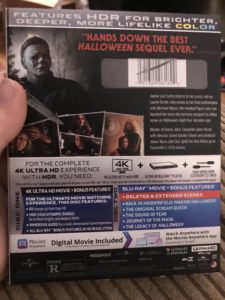 The 4K release of Halloween is another release that includes all of the same features on the UHD that have been included on the Blu-ray disc. There are a variety of features that not only explore the storyline that accompanies the release, but takes a look into the work that went into making the film as well as an homage to the legacy that the franchise has left behind over the past four decades. Included with this release is: 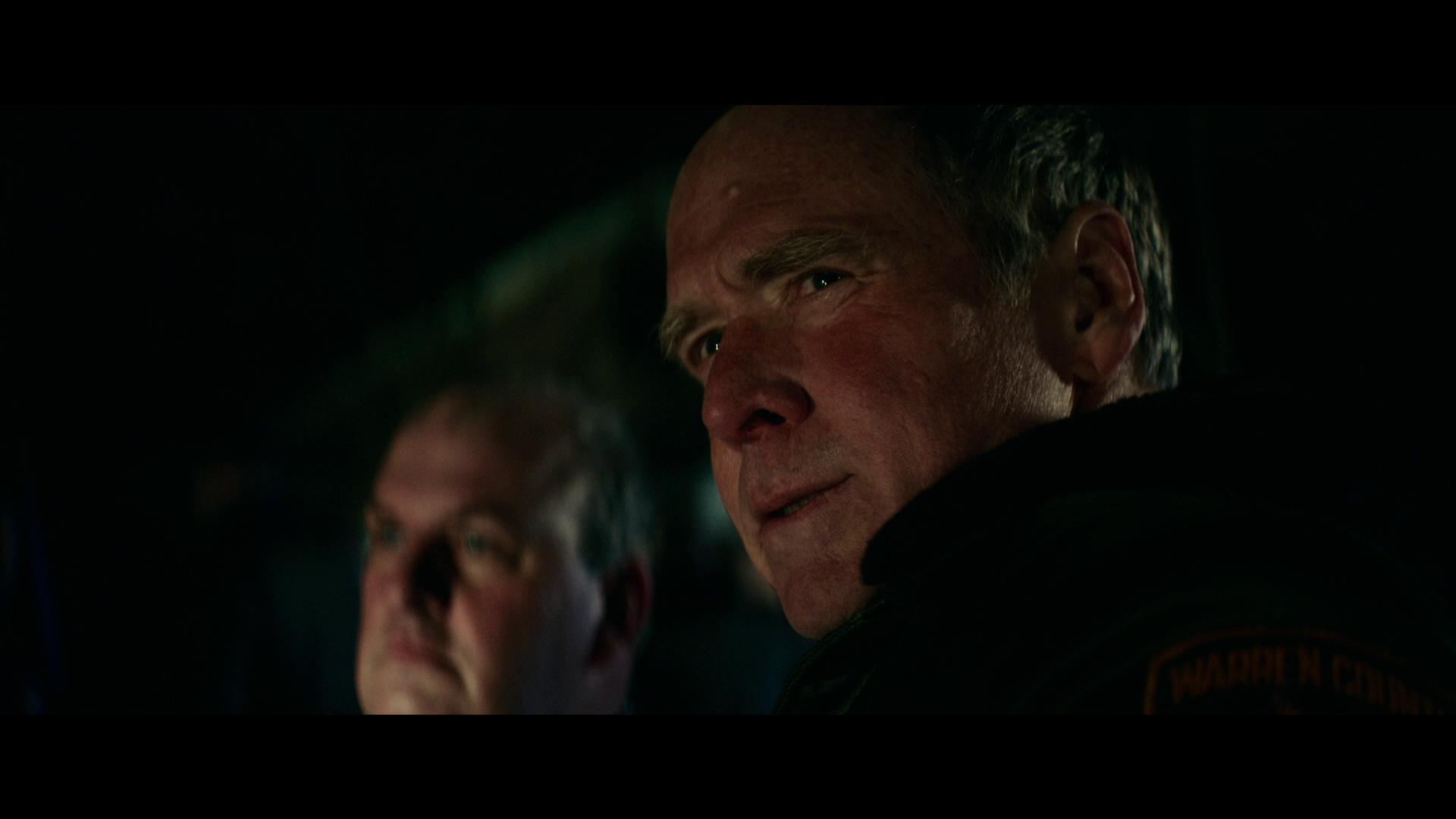 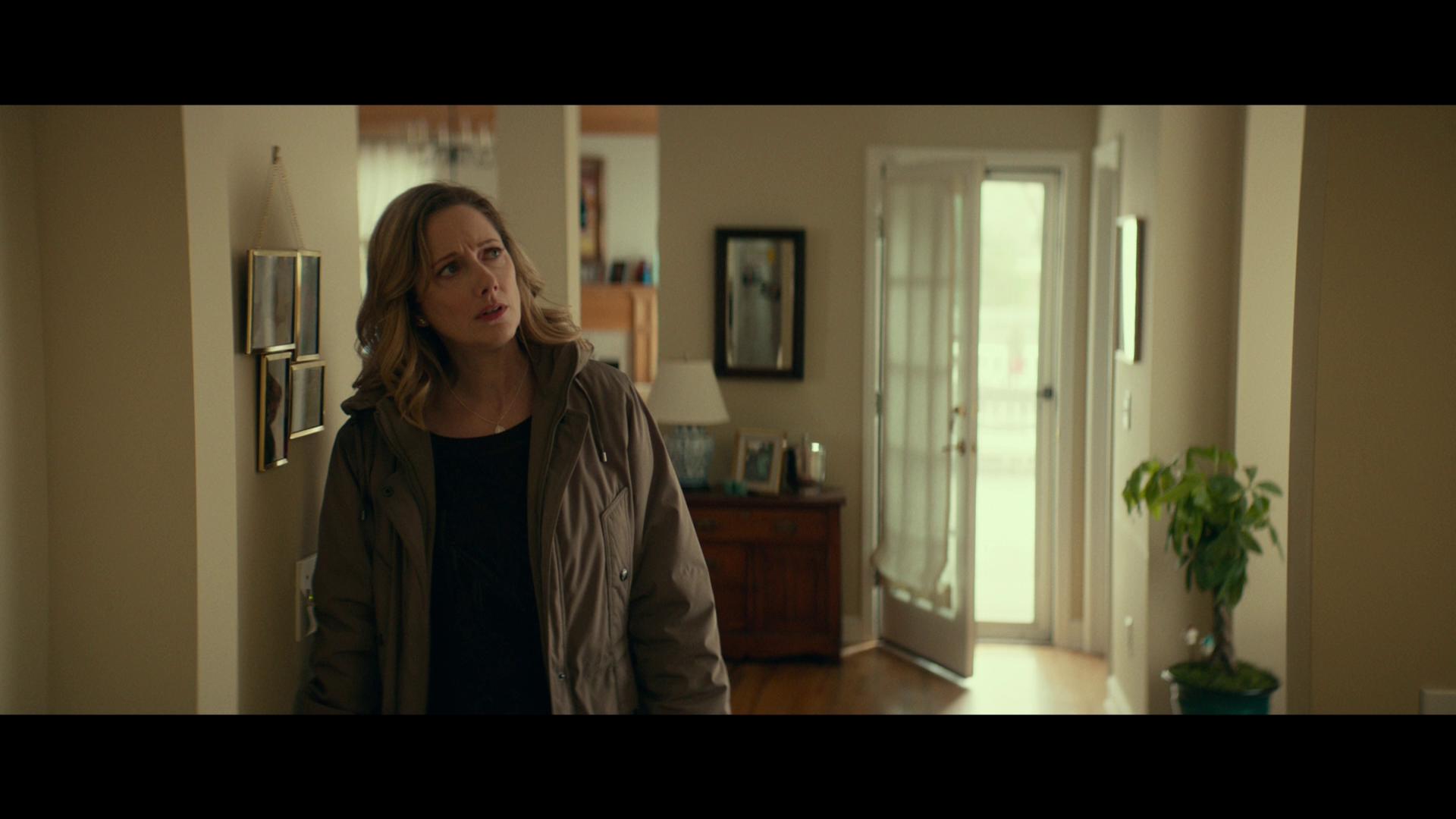 Generally speaking, the movie was a decent enough experience that it offered a fun revisit to the franchise, however it did feel that it was a little too reliant on the structure of the genre and the respects that it paid to the original movie. As this was an ample opportunity for Director David Gordon Green to take a risk and make use of the opportunity to change things up or take the franchise into a new direct, he leaned pretty heavily on the general experiences that were provided. The visual presentation that accompanied this release was really nicely done, and offered a clean look into the horror and scare tactics that Michael uses when chasing after Laurie, and the accompanying audio track was a phenomenal experience despite its shortcomings and lack of use of the elevation aspect. If you’re considering this release for your collection, I would absolutely recommend picking up the UHD over the Blu-ray. Halloween will be available on 4K UHD, Blu-ray and DVD beginning on Tuesday, January 15, 2019. 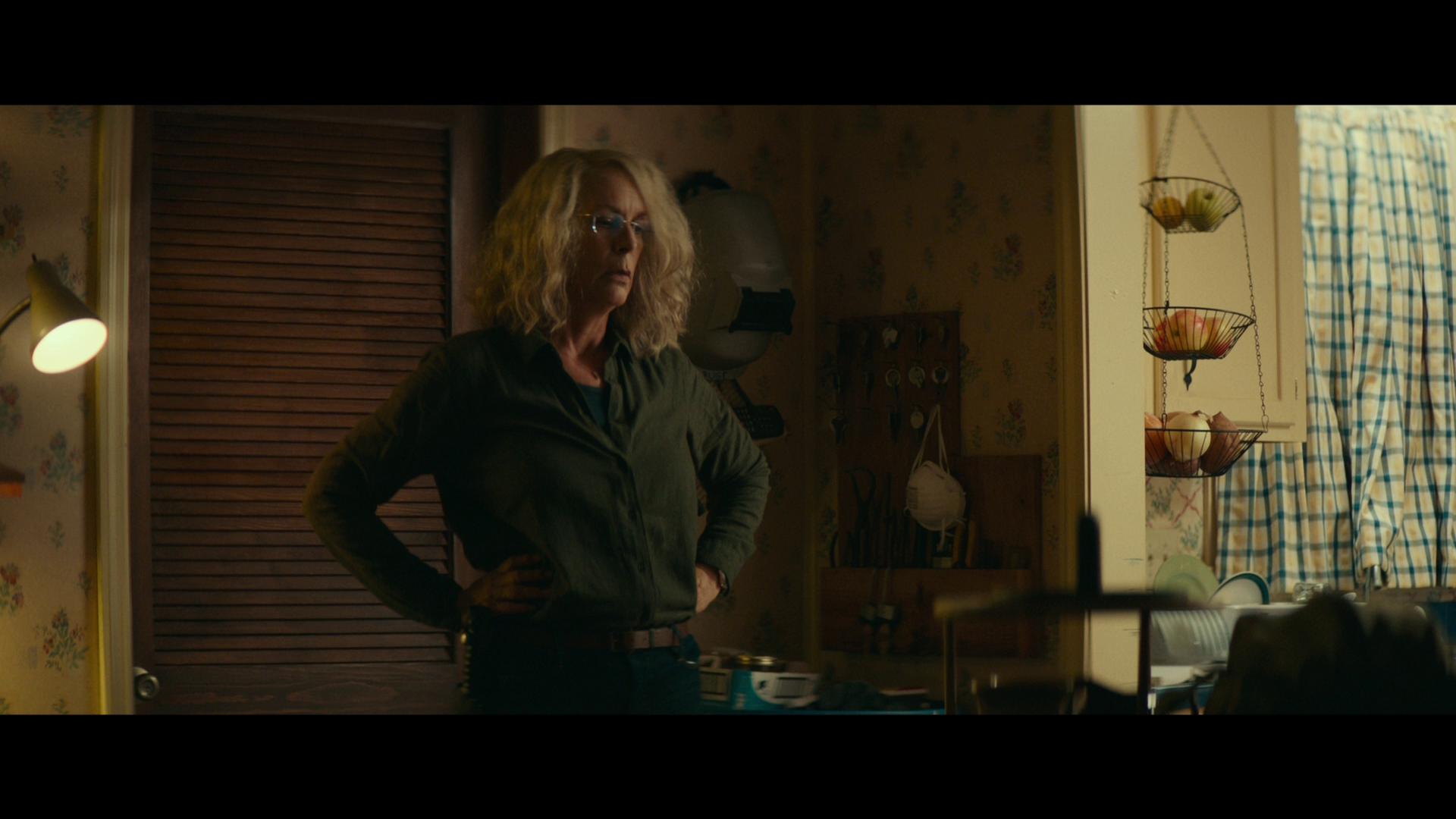