Hail Caesar!, the Coen Brother’s most recent filmmaking effort, to me, can be most easily likened to a pot of soup with a touch too many ingredients. The flavors you want are in there somewhere, but there’s so much competing to become the dominant flavor that it all gets lost in a big shuffle. The overall product is still tasty in many ways, but it isn’t quite the soup you wanted, and you can’t quite describe what you just ate. That’s Hail Caesar! 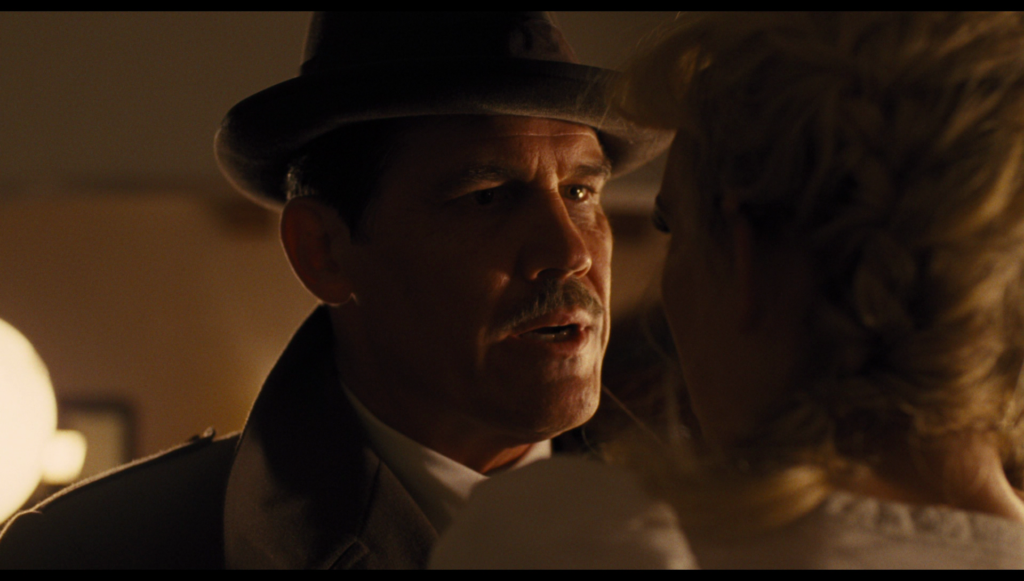 Now, take that idea, and approach it from the context of Hollywood in the early 1950s.

Hail Caesar! is, at its core, the story of Hollywood studio “fixer” Eddie Mannax. His job is to deal with the various scandals created by the many actors and actresses that currently work for his studio, Capitol Pictures. In his travels, he must deal with a troubling actress who refuses to settle down but loves to sleep around, an actor who has gone missing, and an accompanying kidnapping conspiracy. On top of that, he has to deal with a pair of notoriously obnoxious reporter twins, a forced re-imaging of another actor that isn’t going very well, and a pestering recruiter who is trying his best to coax him away from Hollywood to work for a famous military contractor. All in an hour and forty five minutes.

The movie suffers, as I said above, from a lack of focus at its core. Instead of coming off as a coherent story, it feels much more like a series of intricate sketches that are incredibly disconnected, that Mannix happens to walk through during various points of the film. Had the film picked one of these stories, or maybe even two of them, it could have been an incredibly amusing romp through classic Hollywood. Instead, we get a series of small, mostly unsatisfying stories about a group of mostly independent characters who all break off to do their own thing. The movie is clearly about Eddie Mannax, and yet he doesn’t seem to play a major role in the story that was heavily paraded about as the central story line of the film – the kidnapping of Baird Whitlock, star of the prestige picture, and the film’s namesake, Hail Caesar!

Focus issues aside, each individual piece of the film plays off as another one of the Cohen Brother’s love for nostalgia, this time for the Hollywood movies of the late 40s and 50s. There is an elaborate Gene Kelly-esque dance sequence in which we get an intimate look into how movie musicals of the era were made, and a large scale synchronized swimming sequence in which Scarlett Johanssson pops out of a large water spout in spectacular fashion. There’s a lengthy sequence dedicated to the creation of classic Hollywood westerns, and large, flashy costume dramas. The film’s name sake production is a loving reference to the large format blockbuster epic Ben-Hur, which I previous swooned over as a part of my 70mm Classics series. For those who truly love the films of the 40s and 50s, many of the film’s sequences are structured around these painstakingly created homages to the Golden Age of Hollywood, which is phenomenal. 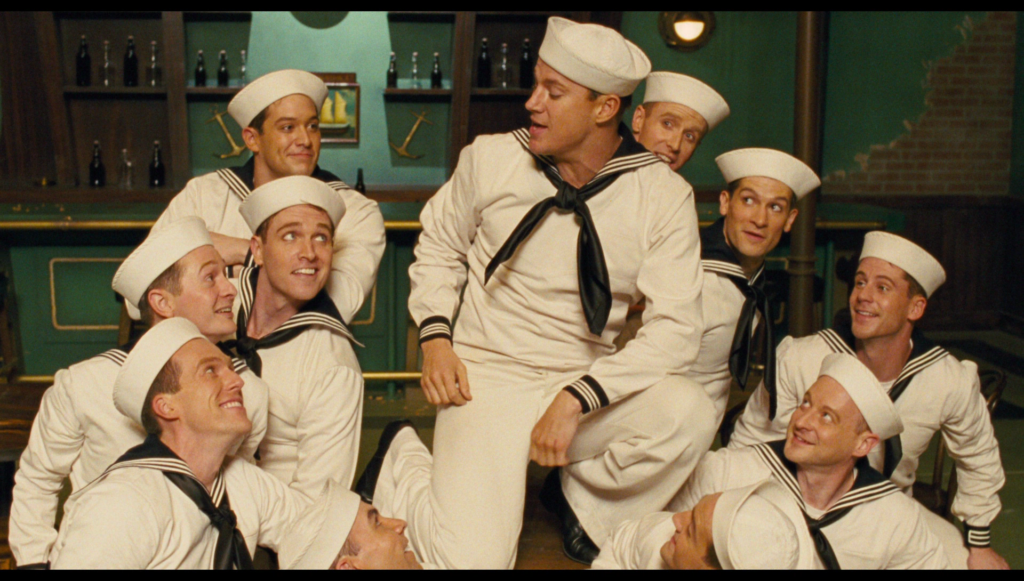 If the film wasn’t already overstuffed with competing stories, it certainly is with modern Hollywood stars. Josh Brolin, now a Coen regular, leads the cast of all stars alongside one of the greatest ensemble casts ever assembled – George Clooney, Ralph Fiennes, Jonah, Hill, Scarlett Johansson, Frances McDormand, Tilda Swinton, Channing Tatum, and even a brief cameo by Newman himself, Wayne Night. Each one of them, no matter how brief their roles are in the film, add their mark on the film with full gusto. The Coens are the type of filmmakers who command such respect, that even if they ask you to cameo as a doorman, you drop everything to get that kind of chance, and it shows. They got half of Hollywood to play their hearts out for a little over twenty million dollars, something that is essentially unheard of in this day and age. Not a single one of the A-listers who show up, or even the smaller character actors, such as Christopher Lambert or Robert Picardo look like they aren’t having the time of their life inhabiting the characters of the world that the Coens created. 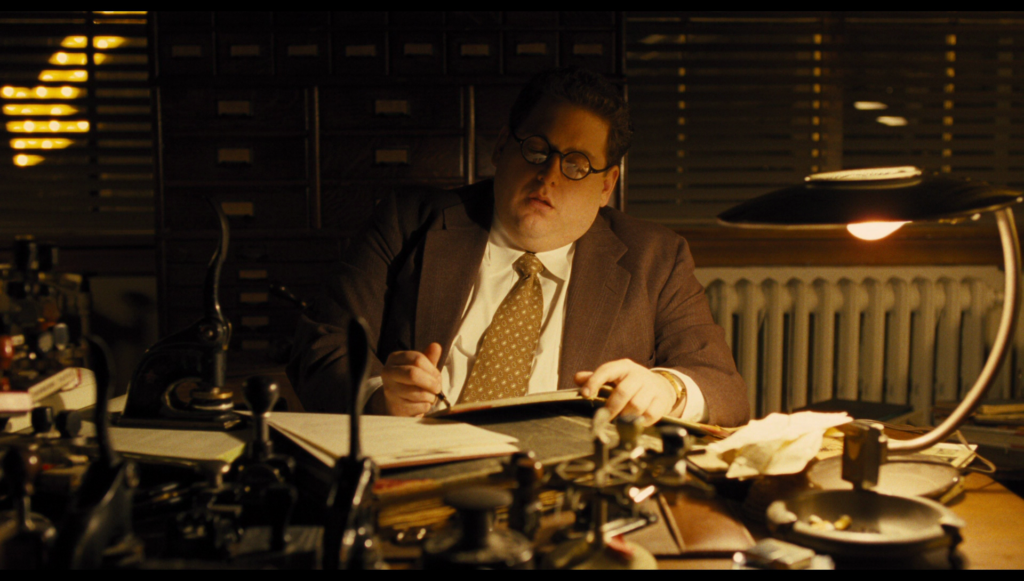 Hail Caesar! has been filled to the brim with authenticity and love for a long gone era, but it ultimately tries to do way too much in too little of time. The script is full of incredible ideas, and many of them resolve in entertaining, but ultimately unsatisfying ways that left me hungering for a bit more. The cast is incredible, and the movie brings so much to the table in terms of visuals, and writing that you can tell the Coen Brothers truly hold this era of Hollywood near and dear to their hearts. I just wish that they had shown a bit more restraint, instead of stuffing every single idea they had into a single film.

Shot on 4-perf 35mm motion picture film, Hail Caesar! was scanned at 4K resolution, and cropped in post to achieve a 1.85:1 flat aspect ratio. The film is presented on Blu-ray in 1080p resolution, maintaining the 1.85:1 theatrical aspect ratio.

Hail Caesar!, lensed by cinematography legend Roger Deakins, is truly a sight to behold on Blu-ray. Hail Caesar! is a film that is full of colorful costumes, huge constructed sets, and various location shoot sequences, each frame could be picked out and held up as a painting. The Blu-ray’s 1080p transfer is truly incredible, with rich colors, incredible detail, and a layer of grain that is so fine that you can hardly tell that this film originated on film. Deakins’ use of light and color is held up with the utmost of care, especially with the benefits of a 4K scan. 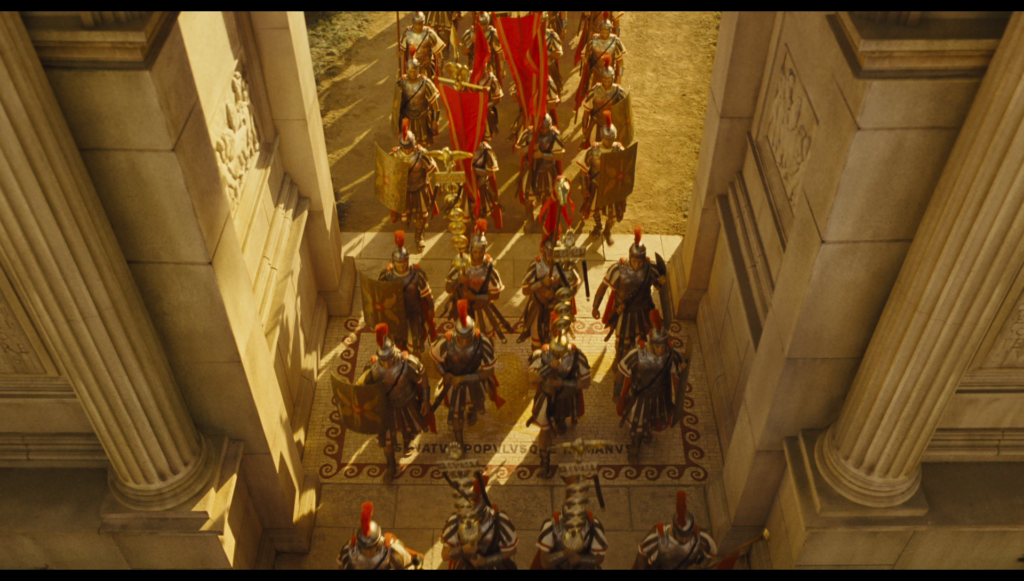 Hail Caesar! is presented in 5.1 DTS-Master Audio on Blu-ray, replicating the original theatrical sound design. That being said, for such a large scale film, with huge casts and a vast number of sets and locations, Caesar never really pushes itself into the spotlight in terms of sound design. Dialogue is clear and well centered, while surrounds see very little action outside of the occasional piece of Carter Burwell’s light score, or sound effect that gets tossed into the rear speakers. Subwoofer activity is minimal, seeing nearly zero use, outside of a singular instance. Hail Caesar! is a busy film, full of activity, but the sound design seems moderately subdued – perhaps another attempt to replicate the sound design of the films it references, which were presented in mono in their day.

Hail Caesar!, released by Universal Home Video on Blu-ray, is packaged in a standard blue keepcase, with a lovely matte slipcover. The slipcover and front artwork of the keepcase are identical, featuring a drawing of Josh Brolin as Mannix, carrying an incapacitated George Clooney as Baird Whitlock, with the film’s title, and a collection of headshots from the film’s biggest stars. As for back artwork, the Blu-ray case features a series of credits, a paragraph about the movie, technical features, a list of bonus features, and a few shots from important moments in the film. This design is mirrored partially on the back of the slipcover, featuring much larger screencaps from the film and a paragraph about the film, without credits. The packaging is fairly standard, with a decent slipcover. 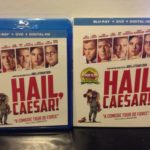 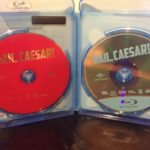 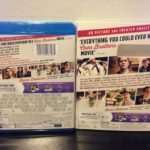 Onto the features, of which there are four:

Directing Hollywood – a short feature on how the Coen Brothers assembled the massive cast to work on the film. A good display of how much respect they have in the industry.

Magic of a Bygone Era – another brief look at the film’s set design, and how the Coen Brothers tried their best to recreate the classic effects of old Hollywood

With a weak set of features which can be finished in around a half an hour, and just decent packaging, Hail Caesar! comes up a little short on the packaging side of things for the Blu-ray release. 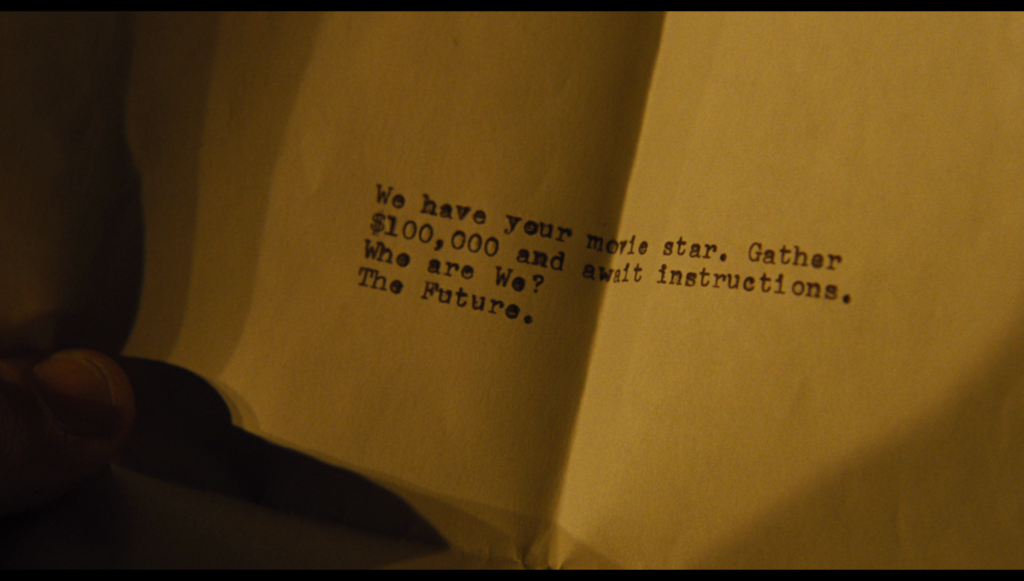 Hail Caesar! was a critical and commercial success, and yet it received middling reviews from movie-going audiences on websites like Rotten Tomatoes, and I can see why. The film is a love letter to the Golden Age of Hollywood first, and a story second, stuffing every single thing it possibly can into a film that runs less than two hours at the expense of a truly compelling story. The acting is great, as is the film’s cinematography and production design, but it didn’t leave me feeling very fulfilled at all. Paired with an incredible video transfer, merely adequate audio transfer, and a less than exciting package of extras, Hail Caesar! falls short of typical Coen Brothers’ releases, both as a Blu-ray and a film itself. This one comes with a hearty recommendation for those who share their passion for old Hollywood, but I wouldn’t sniff around looking for much more.