How The Grinch Stole Christmas!, or as it was originally promoted as, The Grinch is a 2000 American made comedy film that was directed by Ron Howard and written by Jeffrey Price and Peter S. Seaman.  This film was based off of the 1957 story that operates under the same by Dr. Seuss and was the first Dr. Seuss book to be adapted into a full length feature film.

Because the story was based on a children’s picture book, there were many additions that needed to be made to the storyline to bring it up to feature-length, including some information about the backstory and the title of the character.  The majority of the rhymes that were used in the book were also used in the film, though some of the lines were changed to some degree, and several new rhymes were put in.  The film also borrowed some music and character elements that originated in the 1966 animated television special that operated under the same name.  This film was produced by Howard and Brian Grazer and features Jim Carrey, Jeffrey Tambor, Christine Baranski, Bill Irwin, Molly Shannon, Josh Ryan Evans and introduces Taylor Momsen as Cindy Lou Who.

This movie spent four weeks at the top of the box office charges in the United states and becoming the second highest-grossing holiday film of all time after it brought home $345 million worldwide.  It won the Academy Award for Best Makeup and was nominated for Best Art Direction and Best Costume Design.

There is a CGI-animated re-imagining feature film being produced by Illumination Entertainment and features the voice of Benedict Cumberbatch as the Grinch that is due for release on November 9, 2018. 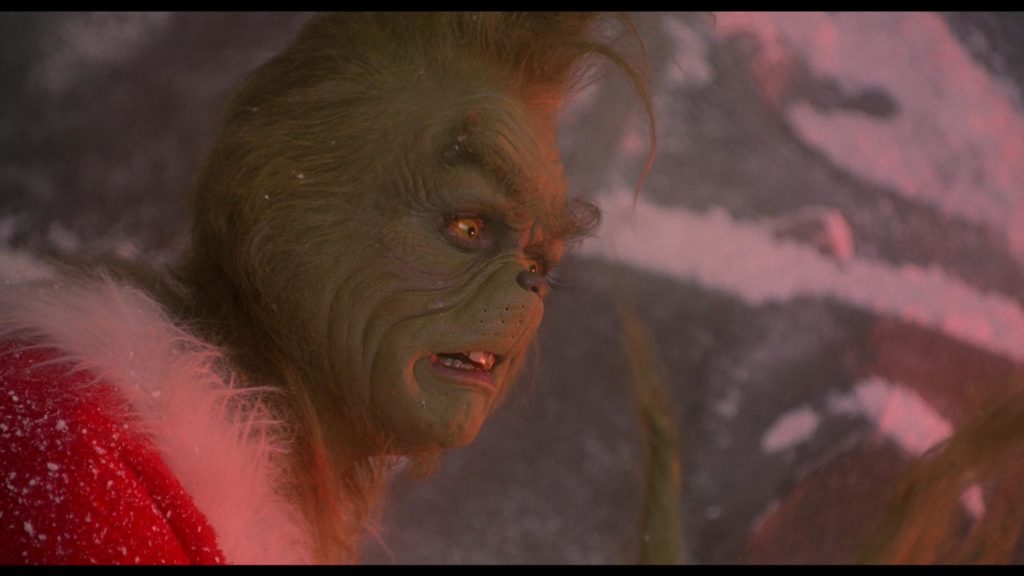 The original animated feature of How The Grinch Stole Christmas! is a long time childhood favorite of mine, so after reading that there were some modifications to the story to make this film to make it more of a feature length film, I had my reservations.  However, after watching through this tonight, I will admit that it wasn’t all that bad after all.  The inclusion of his backstory really helped in developing an understanding as to why he acted the way he did throughout most of the story; and it also allows audiences to feel as if they were right there and feel rather empathetic for him.  Also, the fact that they got Jim Carrey to be the Grinch was absolutely fantastic.  Jim Carrey being one of the funniest, and goofiest actors who can have some good old fashioned fun really helped in the portrayal of the character.

Overall, the visual presentation that the Blu-ray release of How The Grinch Stole Christmas! wasn’t horrible.  Most films, when viewed in 1080p, are worthy of your jaw dropping to the floor.  However, I felt a little underwhelmed with the video quality of this release.  There were some parts that looked absolutely fantastic, however I felt as if the majority of the film sequences really lacked the advantage that Blu-ray gives over DVD.  I also found that there were issues with the darker scenes and found it difficult to see and understand what was happening despite them having some low-level ambient lighting. 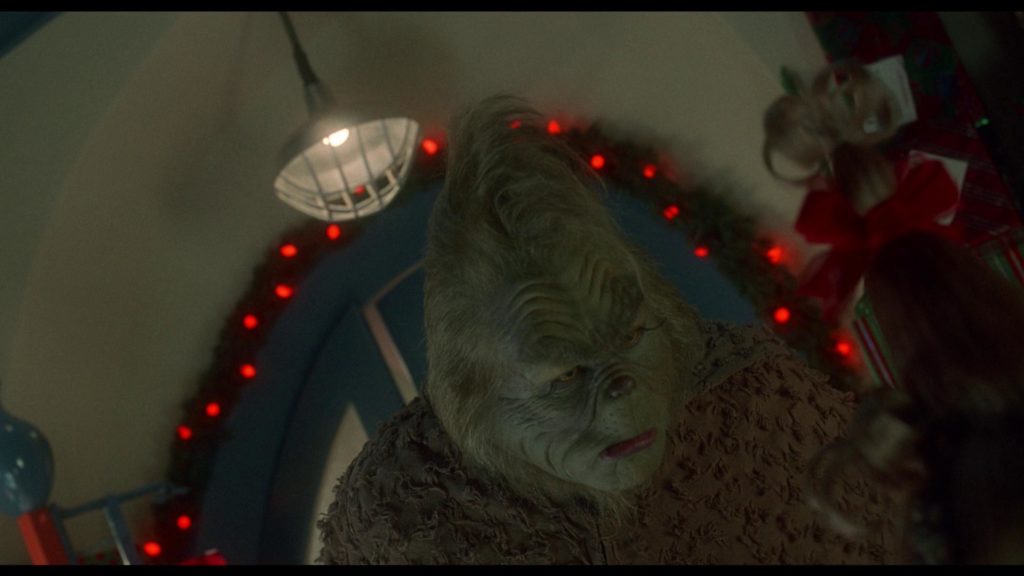 Sporting a DTS-HD Master Audio 5.1 audio track, How The Grinch Stole Christmas! really sounded great as the films audible elements bellowed through my home theater system.  Everything was absolutely crisp, clean and understandable without having to perform any manual adjustments to the volume levels.  One particularly notable part was the scene where the residents of Who’ville are decorating for Christmas and hearing the surround sounds really come through; it really felt as if my wife and I were right there and part of the action in downtown Who’ville. 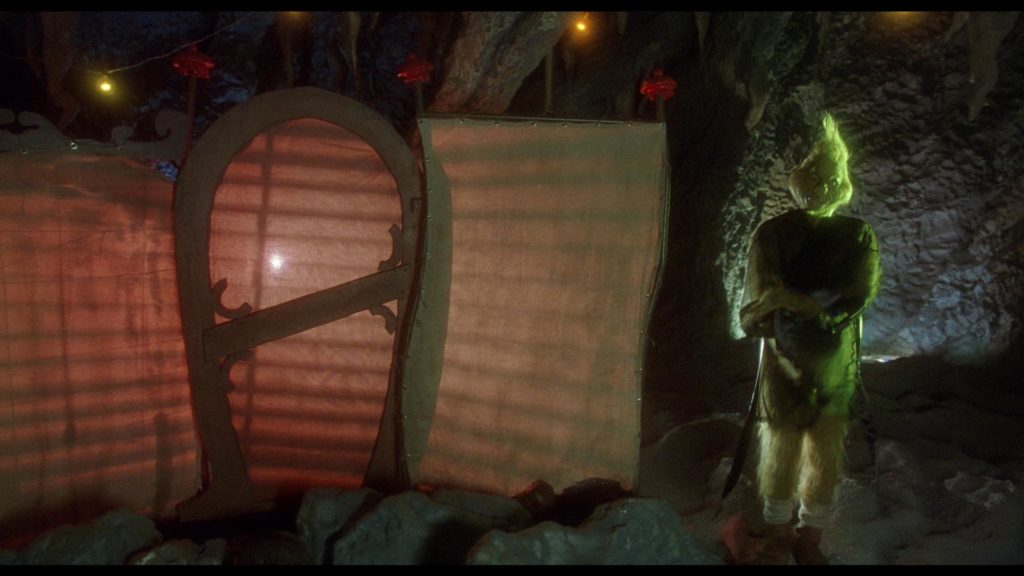 How The Grinch Stole Christmas! comes bundled in a standard Blu-ray amaray case.  Included within that case is the standard Blu-ray disc of the film as well as an UltraViolet digital copy redemption pamphlet to allow consumers to add this film to their digital libraries.  There is no DVD copy included with this release.  This release also sports a slipcover with its first pressing.

The Blu-ray release of How The Grinch Stole Christmas! comes packed full of additional content to allow consumers to dive right in and gain more of an understanding and appreciation for the film and how it was made.  Included with the “Grinchmas Edition” of this film is the following items: 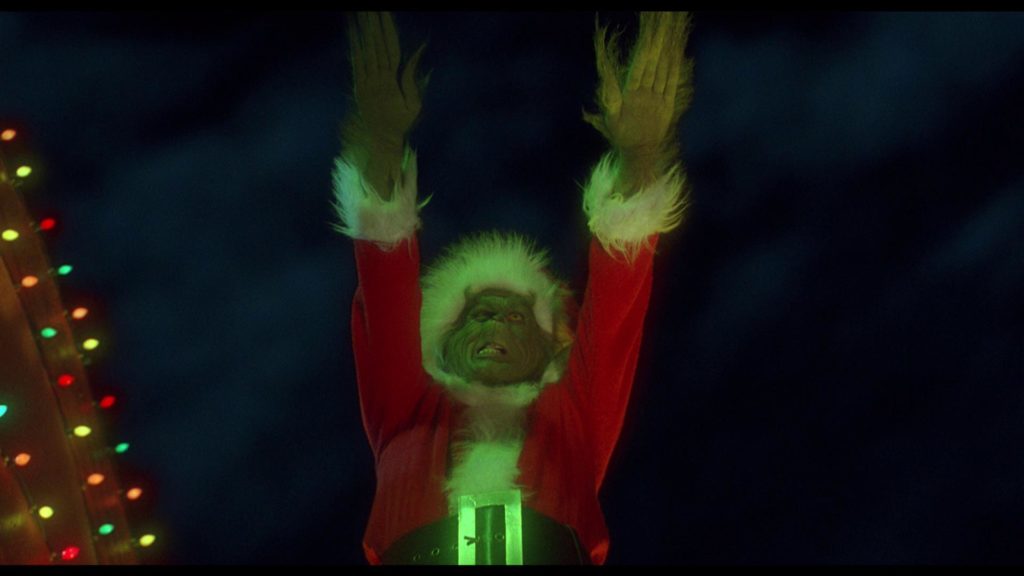 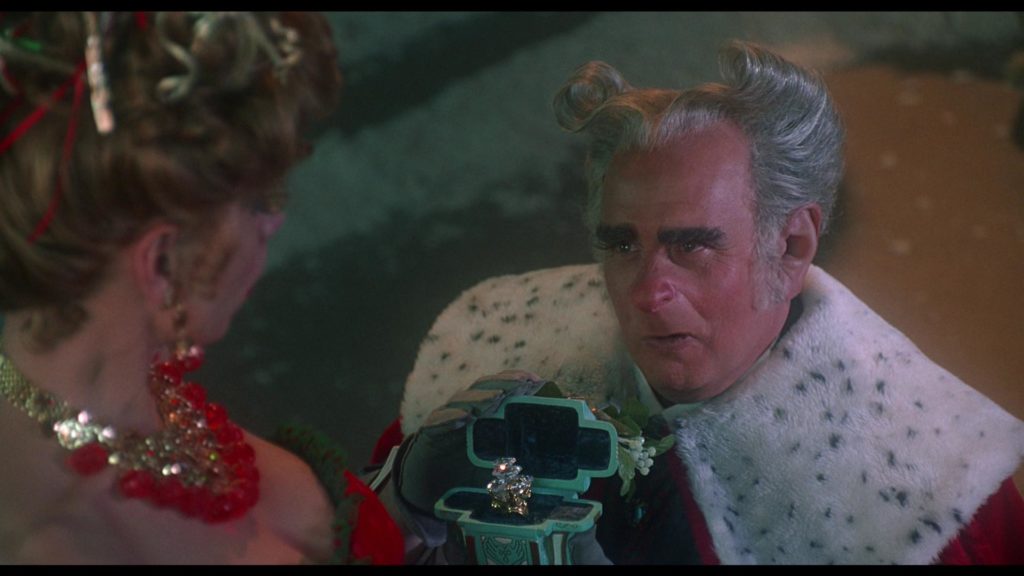 I decided to pick this film up on Blu-ray because it had been years since I had watched Jim Carrey as The Grinch in How The Grinch Stole Christmas!Amazon And honestly, I feel that I could’ve done without this purchase.  While I’m glad that it wasn’t too terribly expensive to pick up, it really doesn’t live up to the name that the original animated television feature had created.  Sure, they did a pretty solid job at creating the backstory for the Grinch and why he hates the Christmas season, but a lot of it felt unnecessary in my opinion.  The visual presentation that’s offered in the Blu-ray release left a little to be asked for in terms of quality, however the use of the DTS-HD Master Audio 5.1 track was really great.  As you can see above, there are more than enough items in the Special Features for this disc.  So, if you’re looking to add this film to your personal collection, you can grab it on Amazon today! 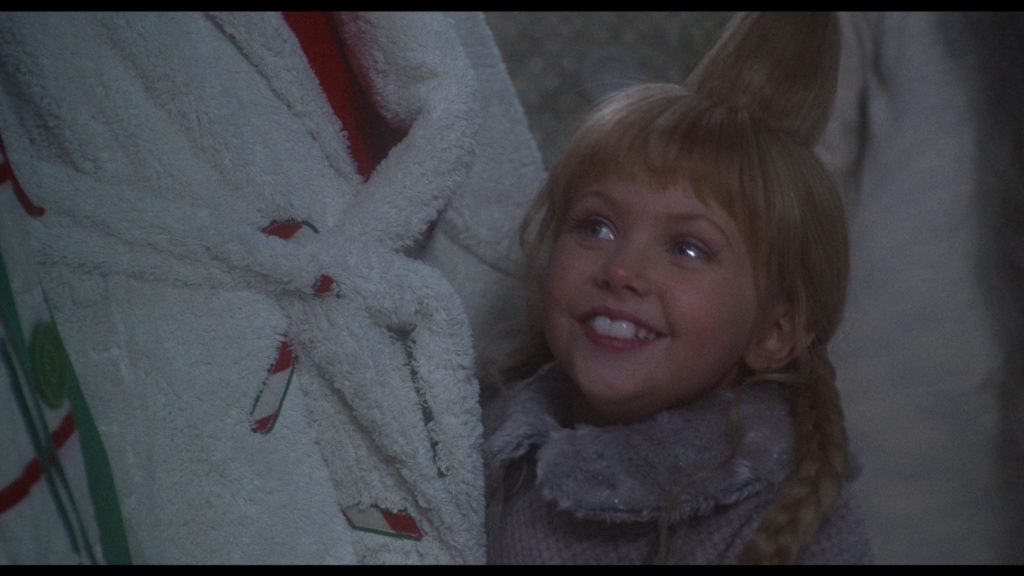