Going into this review, I had heard a lot of buzz on the Internet about the Indie-horror/thriller Green Room. I did not get a chance to catch it in theaters, so this was my first viewing. Starring Patrick Stewart as Darcy, a Neo-Nazi club owner and cult leader, and the late Anton Yelchin as Pat, leader of a small-time indie punk band looking for any gig they can scrum up, I was heading in with high hopes. When Pat’s band stumbles upon a grisly attack in the Nazi club after their set, he and his bandmates are trapped in the “Green Room” in the back of the club, held captive by the Nazi henchman outside the locked door.

Green Room is another success in a long line of Indie horror films, following on the heels of movies like The Witch, It Follows, and others. Although it was an above average film, I had a hard time putting it on a pedestal, as my expectations were extremely high heading into this viewing. All I had heard was how great Stewart was in this film as an evil, conniving, and brutal Nazi leader; a far cry from Captain Picard. However, I was completely underwhelmed by his evil character. Stewart did a fine job in the role, but there was more to be done in order to truly get him on a list of all-time evil characters, even though many in the media were ready to place him there in the early reviews.

The best part of Green Room was the low-budget feel, with a high production value. The grisly attacks from dogs, knives, and guns were handled beautifully by the practical effects department. In one scene, after one character’s arm has been sliced repeatedly by Nazi thugs, the realism in the aftermath of the attack is some of the most beautiful gore I have ever seen on film. In later scenes, stomachs are sliced open, necks are thrashed by attack dogs, and heads are blown away by heavy guns. Green Room is a visceral and brutal siege movie, but the effects alone are worth a viewing. Be warned; this one is not for the faint of heart.

Green Room was filmed in Northern Oregon, and it shows. The visuals are gritty, dreary, gray, and drab, and now my thesaurus is all out of words for “Oregon”. Shot digitally on an Arri Alexa, the visuals are smooth, but it does not take away from the gritty feel that the cinematographer was clearly shooting for.

Being a dark film, the contrast and brightness are extremely important, but this Blu-ray presentation delivers. The use of lighting in odd areas of the club is used to perfection. Whether it be exit signs, bar lights, or ambient light from the outside windows, there is always a visual aid to the dark club, which makes for an easy and clear viewing experience.

The audio on this release was mostly great, with a powerful DTS-HD Master Audio 5.1 track pushing the punk soundtrack through my SVS Prime Tower speakers. The audio was not very wide in scope, as much of the film takes place within a single room, but when the sets expand, the ambient noise filled the back speakers with appropriate volume. My new subwoofer, the PB-2000, was especially prevalent and powerful in the early club scenes, and with each bang, shot, and reverb from the microphones. Bass heads will enjoy the subtle action, even though it will not blow you away.

My major complaint with the audio, and the reason for only a 3.5 score, comes from the dialogue towards the end of the first half of the film. When Darcy is speaking to the band through the door of the Green Room, you can clearly hear what everyone is saying within the room, but on the other side of the door, muffled by the barrier, it is nearly impossible to hear Darcy’s dialogue without blowing your speakers out when it returns to the band members. I thought that this was an unfortunate limitation in these crucial “Set-up” scenes early on, and constant volume adjustment was necessary.

Green Room comes packaged with a nice slipcover which prominently features the major players. I would have preferred artwork more along the lines of the creepy theatrical poster (as seen on the back cover of the case) but with smaller titles like this, the cast is often the biggest selling point to consumers, so I understand the decision. Woe is us collectors. Green Room includes a single Blu-ray disc in an eco-case, with a Digital HD code that can be redeemed on your favorite UV service. There is no DVD included with this Blu-ray release. 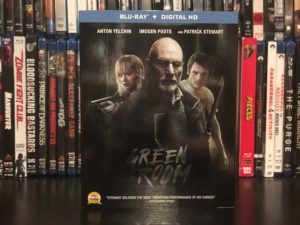 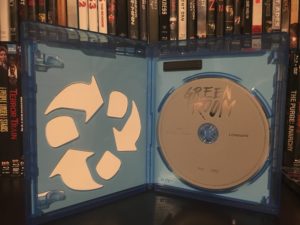 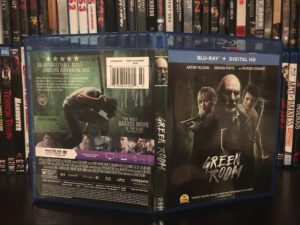 As far as features go, fans will be disappointed. We do get a commentary track from Director and Writer Jeremy Saulnier, but other than that, there is just a 9 minute featurette with some of the cast and crew on set in Northern Oregon.

Green Room is a fun movie, even if it is a bit gritty and extremely violent at times. It reminds me a lot of typical 80s horror films, much like many of the other recent Indie horror movies in this “Renaissance” period of independent films. Distributors A24 and Lionsgate have once again found themselves a low-budget winner, and although there are certain limitations to the audio, the video presentation is excellent and the film offers up an enjoyable 95 minutes of entertainment. Go into this one with no expectations, and I guarantee that you will enjoy your experience. Green Room can be had on Amazon HERE.