I’d like you to imagine a fire – nothing huge, maybe just a small brush fire. Now, imagine the fire truck pulling up to put out the fire, with their little firehouse dalmatian on board. Now imagine the dalmatian walking up to the brush fire and taking a dump. Gods of Egypt is that flaming dump.

Gods of Egypt is what could possibly be the last straw in a long line of declining success from director Alex Proyas. A younger Proyas had a promising career in Hollywood with the visually stunning The Crow being his first film, followed by Dark City. However, after Dark City, he directed I, Robot, Knowing, and now the massive box office failure Gods of Egypt. Alex Proyas’s days in Hollywood may now be numbered, as Gods of Egypt carried a $140 million budget and only made $31 million in US theatres. Even with worldwide ticket sales, the film came in $10 million short of budget, and budgets do not typically include marketing costs, which can be tens of millions of dollars more.

Gods of Egypt follows the conflict between the Egyptian Gods and brothers Horus, played by Nikolaj Coster-Waldau (Jaime Lannister on Game of Thrones) and Set, played by a shockingly Scottish Gerard Butler (300). Horus is overthrown at his inauguration as King of Egypt by Set, and the movie follows Horus’s fight, with the help of the mortal boy Bek, played by Brenton Thwaites (The Giver, Oculus) to get back the throne which was rightfully his and overthrow his maniacal brother. Along the way, various CGI battles with colossal creatures, mythical monsters, and metallic Gods (the quasi-steampunk beasts that Horus and Set turn into when they fight are very cool) create a fun viewing experience, but the scenes in between are simply a waste of time.

One of my major gripes with Gods of Egypt is the fact that everyone has a British accent. This is not a new phenomenon in Hollywood, and I am certainly not one to scream outrage at each casting announcement. That being said, in film so centered around the literal Egyptian mythologies and Gods, it would have been nice to have seen some talented actors who have a bit more of the proper background get these roles. Instead, we are treated to a Danish Horus, a Scottish Set, and an Australian who plays an Egyptian mortal. It is utter nonsense, just like the rest of the film, but it is a shame to see what could have been a decent idea go down the drain because of the casting. I’m not calling for an entirely Egyptian cast; that is not a reality. However, a cast that more closely resembles the people from the region and doesn’t blatantly use heavy European accents like Butler’s would make a lot more sense for this storyline.

I can see the vision here, and the Egyptian mythology combined with the CGI and visual effects could have been a lot of fun to watch, but Director Proyas has taken a good idea and done such a poor job with the cast and developing a story that it feels like a bad episode of Game of Thrones more than the epic Egyptian Mythology that it should have been. I do not score any film a zero, as no film is truly worth nothing in my mind, but this one is damn close. The visual effects and technical merits are excellent, as I will cover in the next few sections, but this film deserves every low score imaginable. An extra half-point for the mighty-morphin’ mechanical Gods, but that is it. Gods of Egypt is a complete critical failure, but that is not the reason to avoid picking this one up for your collection, as the technical merits are outstanding.

As poor as Gods of Egypt is from a critical standpoint, it is an absolute marvel from a visual standpoint. I knew going into this review that there were going to be plenty of cringe-worthy moments on screen, but at the same time, I knew that my 55″ Sony TV was going to get one hell of a workout, and Gods of Egypt did not disappoint. This is probably the most colorful release in my expansive Blu-ray collection, and I firmly believe that it is visually superior to the Transformers franchise, which was the comparison point I had in mind heading into this review. Gods of Egypt is closer to a film like Tim Burton’s Alice in Wonderland than other famous CGI franchises like Transformers or Clash of the Titans based on the incredible color palette that the filmmakers created.

My only gripe with the visual presentation of Gods of Egypt is the way that the CGI was rendered. Honestly, there are too many scenes like look much more like Sharknado or another cheesy release from The Asylum rather than a $140 million Hollywood blockbuster. The visual presentation could have been perfect if the visual effects team had just put a little more effort into the CGI. Surely not all $140 million went to Gerard Butler (or at least I hope not, he doesn’t deserve it for this performance), and so with a budget so massive I would have expected a more finely-tuned final product than what was presented to the audience. In many ways Gods of Egypt looked more like a current-gen video game than a feature film, with a lot of the softness associated with the graphics in video games seen here in this film.

If you have a new 4K UHD TV with HDR capabilities, I would imagine that Gods of Egypt may make the best use of the new HDR technology from any of the current UHD lineup based on the extreme colors that the standard Blu-ray offered. So, pick your preferred format (the film is available in 3D and UHD) and enjoy the visual feast which is Gods of Egypt.

Gods of Egypt continues to impress with its technical merits on the audio side of things, with Lionsgate providing a DTS:X mix for this Blu-ray release. If you have not yet upgraded to a DTS:X capable system, fear not, because this release also features a DTS-HD Master Audio 7.1 track as the source audio for the DTS:X, and even listening on my current 5.1 system, the audio on Gods of Egypt is incredible. The room fills with sound during each sequence, and I never caught myself adjusting the volume. The dialogue is crisp and clear, even during the loudest action sequences, and none of the European accents are overpowered by the CGI monsters. This is simply as good as it gets on home media, and Gods of Egypt could easily be used as a reference quality audio track.

For a movie that was a box-office failure and widely panned by critics, Gods of Egypt actually has some above average special features. With over an hour of bonus content, it was nice to see Lionsgate put some work into this release to make it more worthwhile for the buyer. Special Features are as follows:

Gods of Egypt comes to Blu-ray in both a standard Blu-ray package and also a Best Buy exclusive Steelbook, which was surprising for a movie of this caliber and success, but is good news for Steelbook collectors. The standard edition is just “meh”, but the Steelbook definitely raises the packaging score for the effort put into that particular version.

The standard Blu-ray release of Gods of Egypt is fairly average new release. It contains one Blu-ray disc, a digital copy which can be redeemed on your favorite UV service or on iTunes, and a holographic slipcover. There is no DVD included in this release. 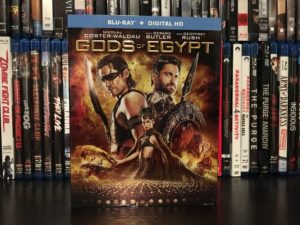 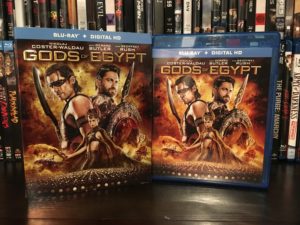 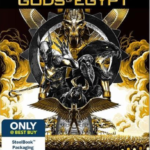 The Best Buy exclusive Steelbook of Gods of Egypt is a very nice release, and is easily the best available version of this film. The Steelbook includes both a 2D and 3D Blu-ray disc, as well as the same digital copy from the standard Blu-ray. Exclusive to this release is the included DVD, so this is a 3 disc set. The artwork on the Steelbook is much nicer than the standard Blu-ray and is also much more representative of the movie’s colorful and eccentric expression. If I had to choose between versions, the Best Buy Steelbook is clearly the superior version, especially if you want to get the most bang for your buck with the inclusion of the 3D disc and DVD. I do not have original images of the Steelbook, but you can check out the artwork courtesy of Best Buy to the right.

Gods of Egypt has a certain appeal to many collectors and lovers of high-paced, CGI-laden movies, especially with how great this one looks and sounds in your home theater, but I cannot recommend it at release day pricing. Steelbook collectors should absolutely grab this one from Best Buy, as the artwork is excellent and the inclusion of the 3D Blu-ray is an added plus for adopters of the format. For the casual viewer, this one is probably worth a rental or borrowing from a friend, but this is a Blu-ray release that should hit the $5-$10 price point quite soon, which is where I would recommend grabbing it.

Note: This Blu-ray release was sent to us for review. This has not affected the review process or the writer’s opinions in any way. Please feel free to contact us with any questions about this process.