After 5 seasons, HBO’s Girls feels slightly formulaic, in that each season feels like a ticking time bomb. It feels like we’re going through the motions, as our four leads slowly break each other, and themselves down in a desperate attempt to find happiness all over again, only to find once more that reality doesn’t always provide happy endings. And yet, even though Girls: Season Five feels like we’re going through the motions, and should feel stale and repetitive, I found it to be the most compelling season of Lena Dunham’s drama about the plight of the millennials in the big city yet. 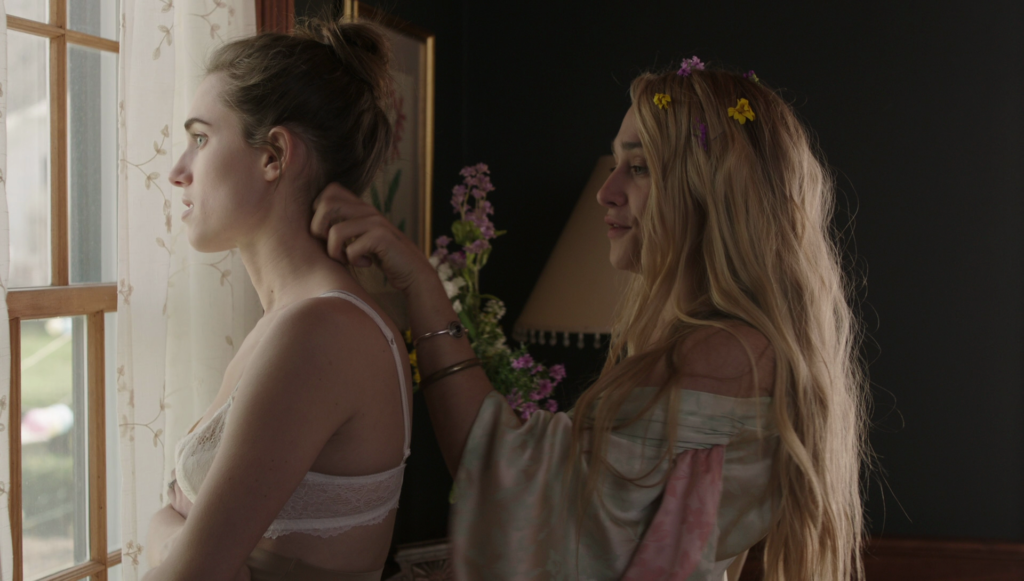 Season 5 picks up directly where season 4 left off, with Marnie and Desi’s wedding which sets up the major plot points for the season; Hannah’s conflicted relationship with fellow teacher Fran, Jessa’s attraction to and later relationship with Hannah’s ex-boyfriend Adam, Shoshanna’s relocation to Japan, and of course Marnie’s difficulties in facing up to married life. In parallel, we also witness the aftermath of Hannah’s father coming out as gay, and Elijah’s passionate romance with a famous newscaster. These character arcs drive the season, as our main cast drive forward over the course of ten episodes towards an explosive finale that sets things in motion for Girls’ sixth and final season.

Girls: Season 5 is a continued exercise in building tension, straight from episode one. We are immediately subjected to Marnie’s frustrations and anger over the state of her wedding, and Desi’s very blatant skepticism regarding getting married and settling down, while at the same time Jessa wanders off, running into Adam while Hannah awkwardly tries to figure out what to do with her boyfriend Fran, who is clearly the outsider at this event. Their character arcs for season five pretty much follow the same beats as previous seasons, with Hannah’s narcissism and self interest causing disaster in both her personal and professional lives, Jessa struggling to keep things together as she enters a dangerous relationship that will strain her friendship with the rest of the group, and Marnie realizes that she may have made a mistake pushing for marriage with Desi, as it self-destructs and causes issues with their professional relationship. 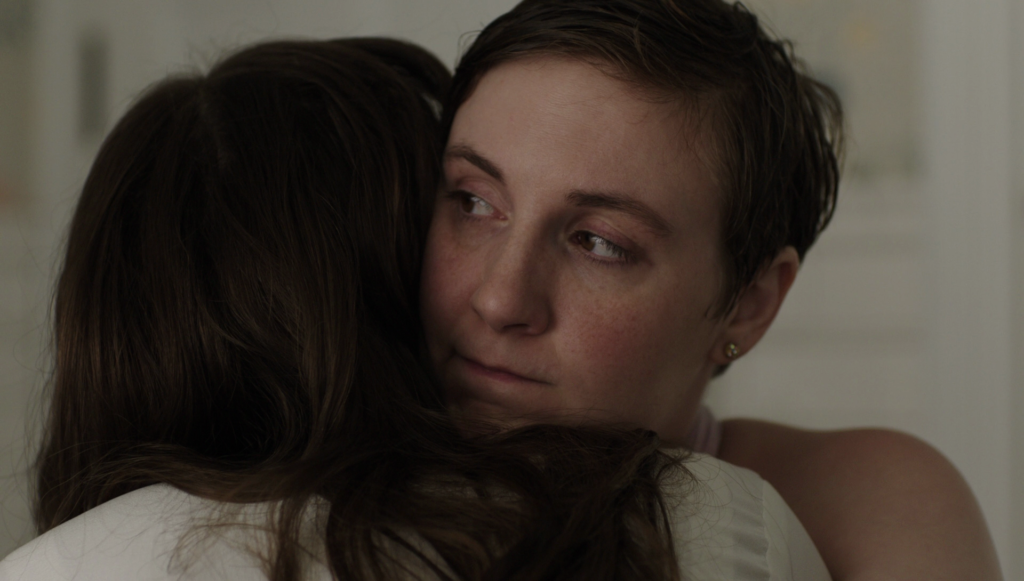 These stories are both engaging and consistently interesting, carried by excellent writing, directing, and acting by leads Lena Dunham, Allison Williams, and Jemmina Kirke, but it feels like more of the same – good same, but still the same as the previous few seasons. Season five’s strength lies with Shoshanna’s arc this season, as we follow her to Japan as she attempts to start a new life, doing marketing for a Japanese branch of a western company, when all of a sudden she is downsized and laid off, and forced to reassess her life up that point. While the other three face character arcs that are baked in relationship drama, and drenched in frustration derived from said relationships, hers feels more grounded and relatable, especially in the current economic climate we exist in. It’s amusing to watch as the character who started off as the most naive and inexperienced of them all is the only one that’s forced to overcome the greatest of obstacles in season 5, as she’s stranded in Japan and forced to put her life back together by circumstances beyond her control. 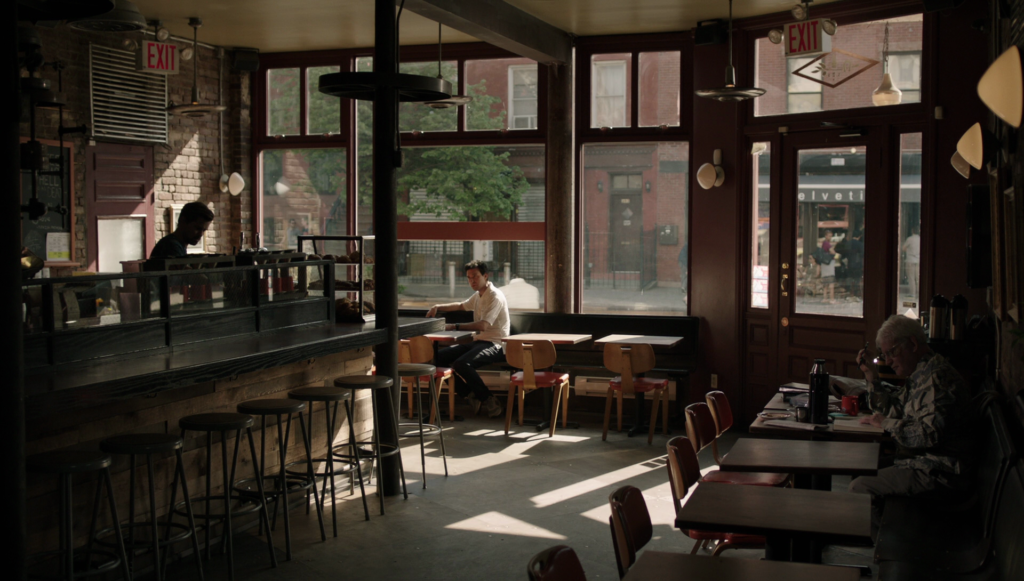 Aside from our four lead girls, we get some fantastic stories involving Girls’ most dependable side characters, Ray and Elijah, who are forced to deal with heavy competition from a fresh, exciting new coffee cafe that’s opened across the street, and their awkward attempts to engage them and try and stay relevant as Ray’s business starts to dissipate, which adds such much needed comedy to an otherwise frustration filled season of drama. Other memorable highlights include Hannah’s father stumbling through his first homosexual interactions with a man in New York City, who is played by Ethan Phillips of Star Trek Voyager fame, and an amusing cameo by Jenny Slate, who returns as Hannah’s nemesis from college, Tally. 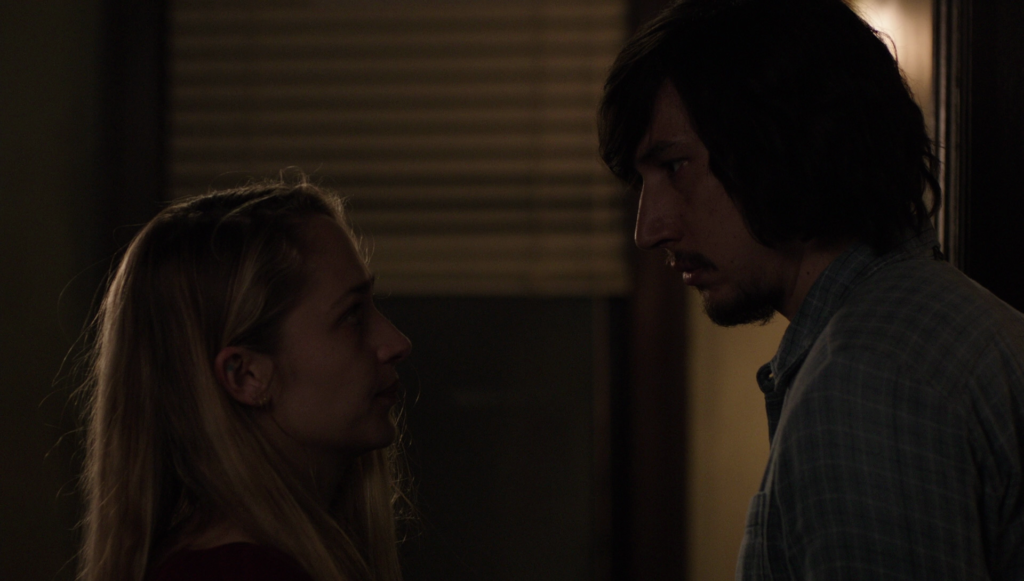 For someone who couldn’t do more than two Fred and Ginger features due to their repetitive nature, I sure had fun with season 5 of Girls, which at times just felt like it was going through the motions with 3 of the 4 main characters. There’s little character development to be found, and pretty much everyone runs into total disaster over the course of the season’s ten episodes, but I’ll be damned if I was wasn’t drawn back for more after each episode’s credits rolled; I’m definitely ready for the next season. Girls: Season 5 is a fun, but comfortable addition to the series, stretching its legs just enough to keep the wheels turning for what I can only hope is going to be a bombastic sixth and final season for the program.

Girls, according to imdb, was shot using the Arri Alexa digital camera, and mastered for HDTV presentation, most likely in 2K or 1080p resolution for HD broadcast by HBO. The show is presented in its original 1.78:1 widescreen aspect ratio in 1080p on home video.

Girls as a show has always had sort of a pale aesthetic to it, in which colors are muted and skin tones have a cool complexion. Season 5 is no different, presenting the life and times of these women and their associates with a rather grounded presentation, one that doesn’t necessarily blow the lid off of your television set. Where it lacks in exaggerated colors however, it makes up for 10 episodes that are sharp, and detailed in all the right places, revealing excellent facial textures, and allowing us to bask in the busy and varied set pieces that the show takes us to over the course of the season. Occasionally some video noise crops up during some of the nighttime exposures, but other than that, Girls: Season 5 makes for a pleasing visual experience in 1080p. 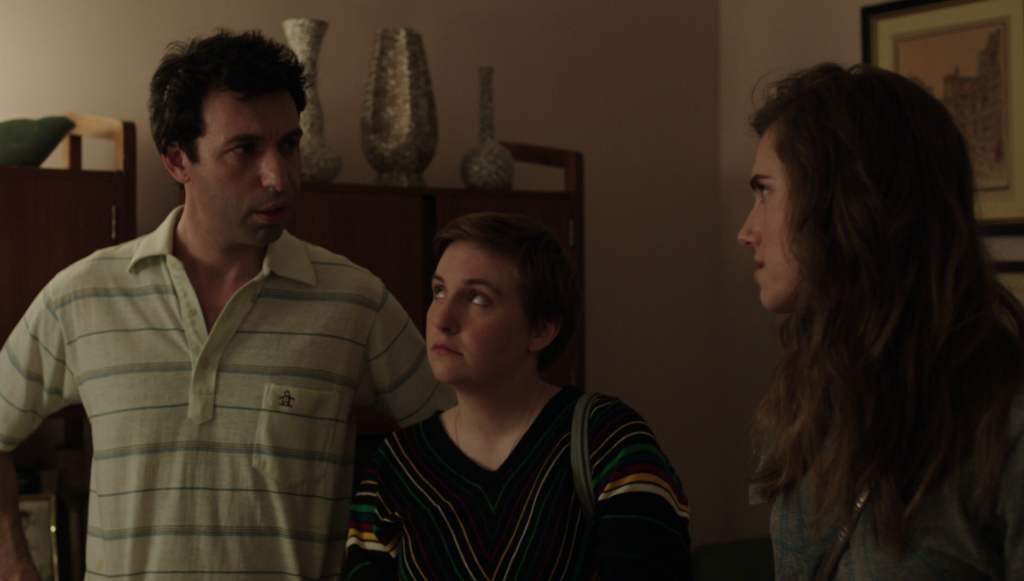 Girls is mostly a show about conversations – loud ones, soft ones, ones taking place in public spaces, ones taking place in close quarters. As a result, it doesn’t make for much of an impact in the sound department, with dialogue locked to the center channel, and the rest of the 5 channel soundspace utilized only for the occasional sound effect or the show’s many licensed songs. There are a few instances of greatness however, such as when Shoshanna attends a crowded concert in Japan, in which the sound is enveloping, loud, and effective. Unfortunately, these instances are few and far between. Girls features a serviceable soundtrack, but nothing more.

Girls: Season Five has been released to home video by HBO Home Entertainment in a standard Blu-ray keepcase with accompanying slipcover. Both the case and slipcover feature the same artwork, with the front artwork featuring a shot of the four lead girls together in wedding garb, colored only in black and white with the Girls logo composited on top in a contrasting deep pink color. The girls are all pieced together using subtle lines to make it seem slightly off kilter, and it makes for a beautiful first impression. The back artwork features the girls in full wedding garb, and headshots of all the major male characters below a lengthy set or paragraphs that provide context and describe the events of season 5. Also on the back are a few review quotes, credits, a list of features, and the technical specs for the release. The inside artwork features the Girls logo, and an episode guide. Girls: Season Five features a striking packaging job from HBO.

Deleted Scenes – disc 1 of the release features 13 deleted scenes, which mostly just add quirky character moments, and outbursts that would have seemed out of place or too goofy, hence why they were cut from the final cuts. 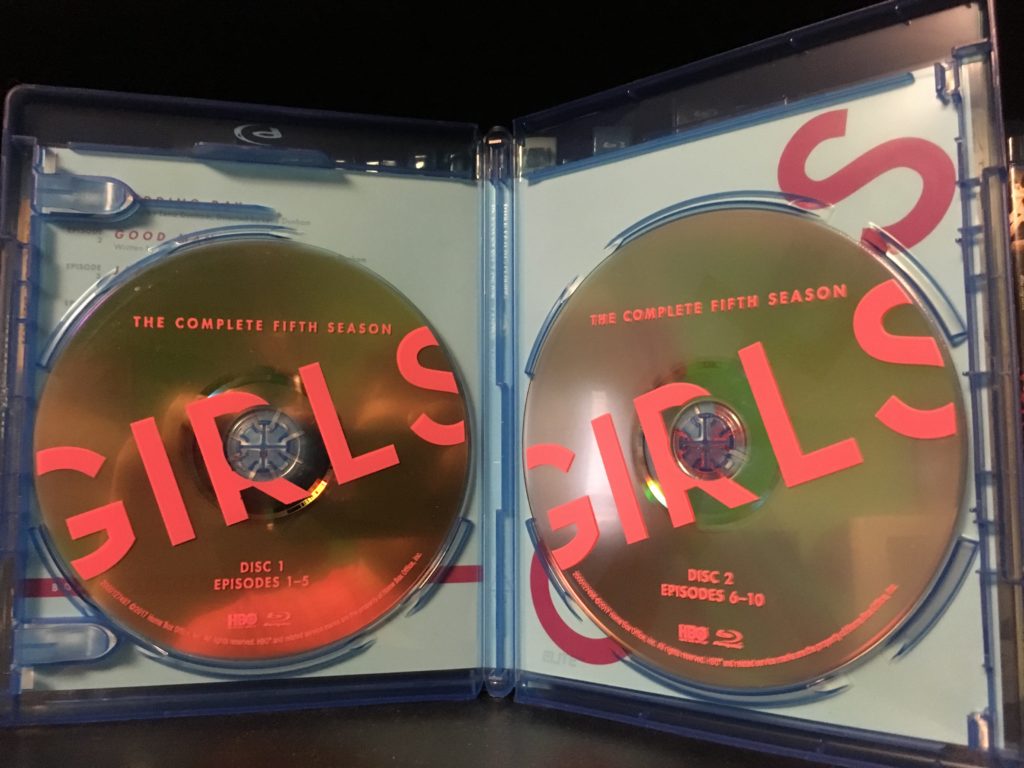 Inside the Episodes – small, 3 minute or so clips in which members of the cast talk about the major themes and moments presented in each episode, exploring them with a decent amount of depth and in a way that makes them interesting. 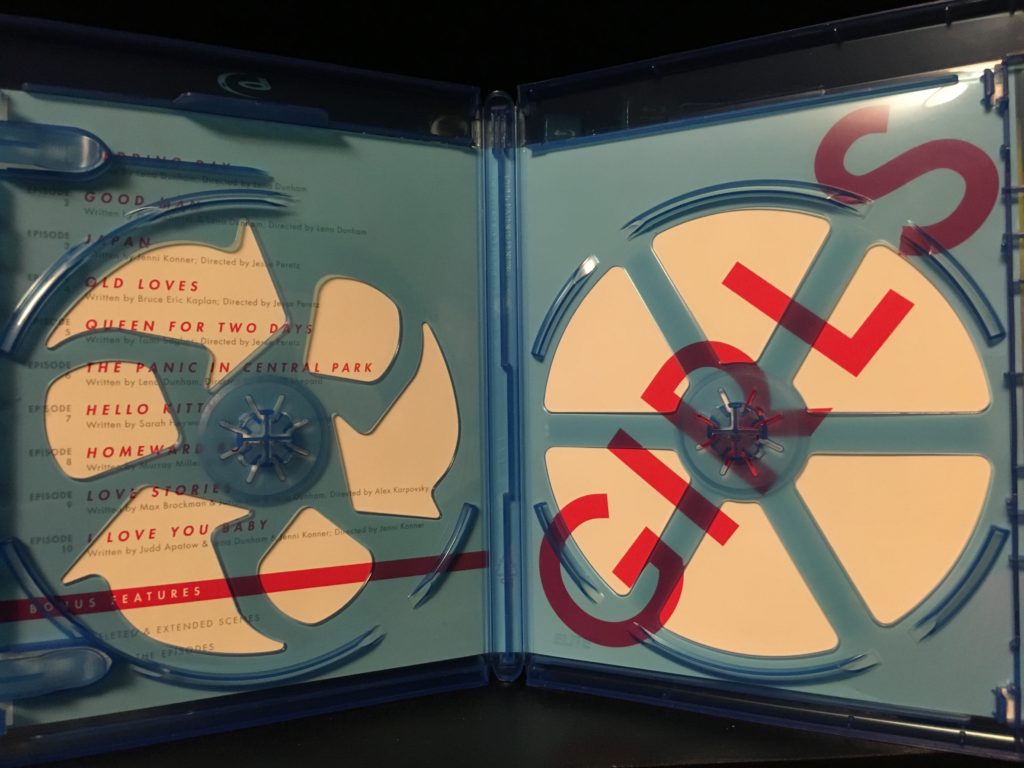 Deleted Scenes – disc 2 features 5 deleted scenes, 3 for episode 8 and 2 for episode 10. Same deal as the first disc, pretty clear why these were cut.

Inside the Episodes – same deal as above, but for the episodes featured on disc 2.

Girls: Season Five features some beautiful packaging, but a pretty mild selection of extras. A commentary or two would have been nice, especially with the big names that work behind the scenes.

Girls: Season Five is a fairly strong entry into the series, one that plays by the rules the show has set for itself for the most part, but opens the characters up to just enough fresh material so that things don’t get stale. It’s a 10 episode ticking time bomb that explodes as the credits roll on episode 10, with an explosion to satisfying that I am absolutely jazzed for the final season to begin its broadcast in February. HBO Home Entertainment has done an excellent job bringing the season to home video, with a strong visual presentation, an adequate audio soundtrack, and a meager set of extras that really only scratch the surface. On the plus side however, it features some absolutely beautiful packaging, one of the best I’ve seen from HBO yet. Overall, I was pleased with this release. Recommended.