Note: While my review of the season below will be spoiler-free and with spoiler-free screenshots, there will be screenshots that contain spoilers throughout the rest of the review. Be warned if you are not up to date on the show…

While Season Four still remains my favorite season to date, Season Six of HBO’s Game of Thrones stepped up in a huge way after a sort of slow and meandering Fifth Season. Where Season Five felt like a lot of filler and necessary details to further the story, the show’s Sixth Season finally hit on some major plot points, and was the first season to actually advance past the writing of creator George R.R Martin. This meant that, even though Martin has outlined his vision to the showrunners, this was their first chance to truly go out on their own outside the confines of the written series, and man, did they deliver. 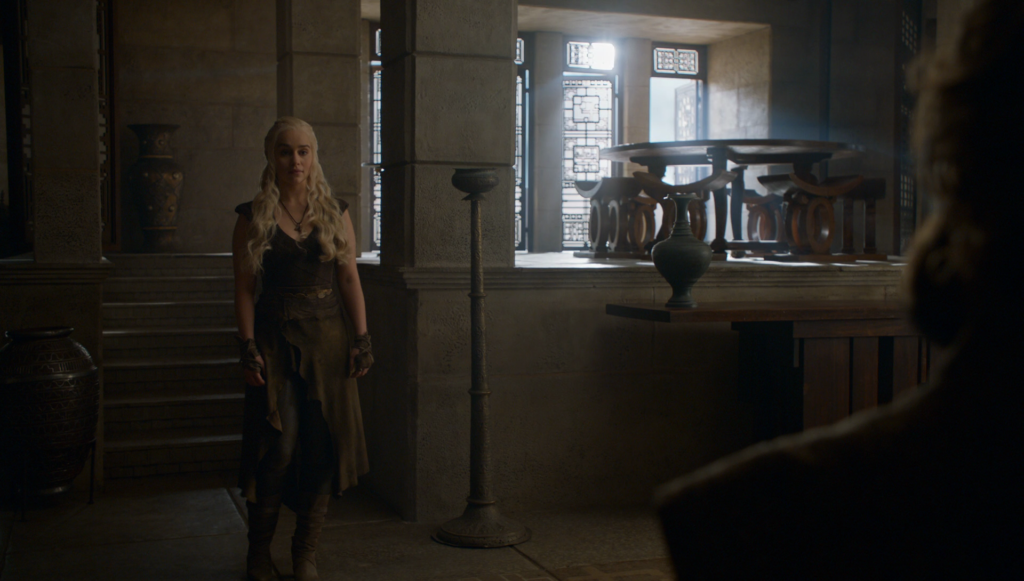 I like to keep my reviews spoiler-free, so I will not go into much detail, but Season Six finally ties up some loose ends and either re-unites or introduces characters to one another, something that we have been waiting for since Game of Thrones began. The story is finally beginning to build the relationships and fight the battles that are necessary to reach the conclusion, and with just two abbreviated seasons remaining in the main show (spinoff shows beside), the wheels are in motion and it is clear to see how the final few stages of the “Game” will fall into place. 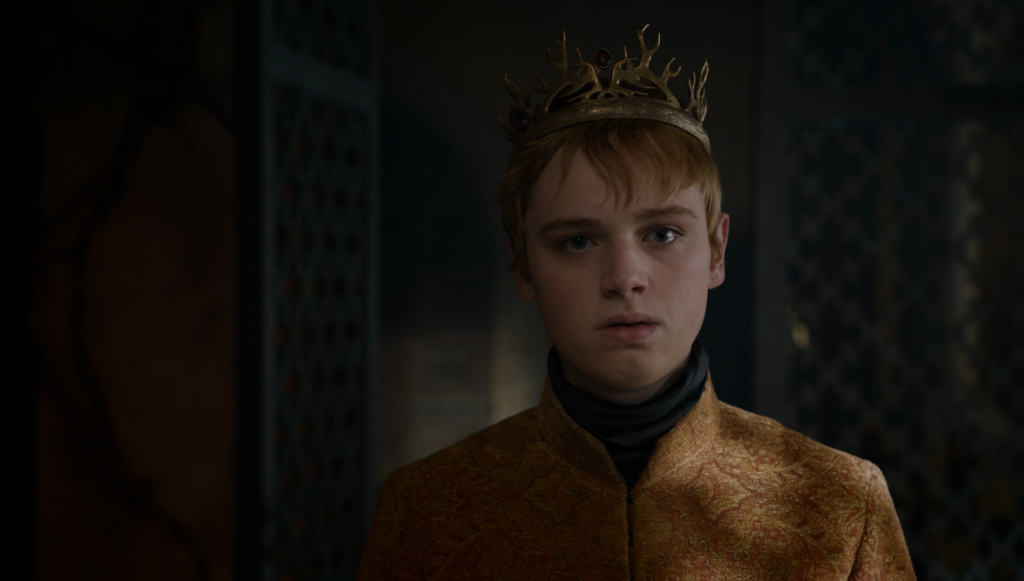 Season Five left viewers with a stunning cliffhanger, and Season Six does take its time to address that situation, which can be frustrating, but loyal viewers will appreciate the motives for this slow start. Do not expect to jump into Season Six of Game of Thrones and get immediate payoff for the cliffhanger, a la Season Seven of The Walking Dead, but do know that is addressed soon enough. The final two episodes of Game of Thrones Season Six are two of the most well written and directed pieces of television that I have ever seen, with a production value that would rival most major Hollywood movies. The drama that unfolds over these final episodes leaves viewers absolutely stunned, and I remember thinking about them for weeks after they originally aired in the Spring of 2016. There is simply no finer show on TV right now, and Game of Thrones Season Six is the pinnacle of what has been an already amazing ride. Here’s to two more seasons like this, and a wonderful conclusion in two years when the show comes to an end.

I watched every episode of Game of Thrones on HBO as they aired, but this is actually my first experience with a Blu-ray release of the show, as I had been holding out for the Complete Series set. My only experience outside of the television presentation was an IMAX showing of the Season Four finale, which was excellent, but the Blu-ray release of Season Six trumps that. I actually went back and watched the TV presentation and those which were available on HBO GO, and the Blu-ray presentation is infinitely clearer, more consistent with coloring, and a prime example of the visual limitations of streaming platforms and cable television.

I honestly cannot find a single flaw with the visual presentation, and although many of the scenes (those set in the North) are full of a gray, dreary color scheme, the scenery is still incredible. As a hardcore fan of the series, I am disappointed in myself for not watching every season again on Blu-ray; this is what this format is all about, and why physical media will deliver superior performance to streaming and television until the infrastructure is upgraded. You simply cannot beat a Blu-ray presentation like this, and if you have not yet seen the show, I suggest picking up the Blu-ray sets over the streaming options, as it is like viewing an entirely new show.

For the television presentation, Game of Thrones is presented with a simple 5,1 Dolby Audio track, which is pretty standard for anything on cable at the moment. However, with the Blu-ray release not only do we get upgraded visuals, but we also get a much improved audio experience as well. The Blu-ray for Season Six features a Dolby Atmos track, with a Dolby TrueHD 7.1 source. The upgraded audio is an excellent addition, and it really helps to build environments and provide for an even more immersive experience. 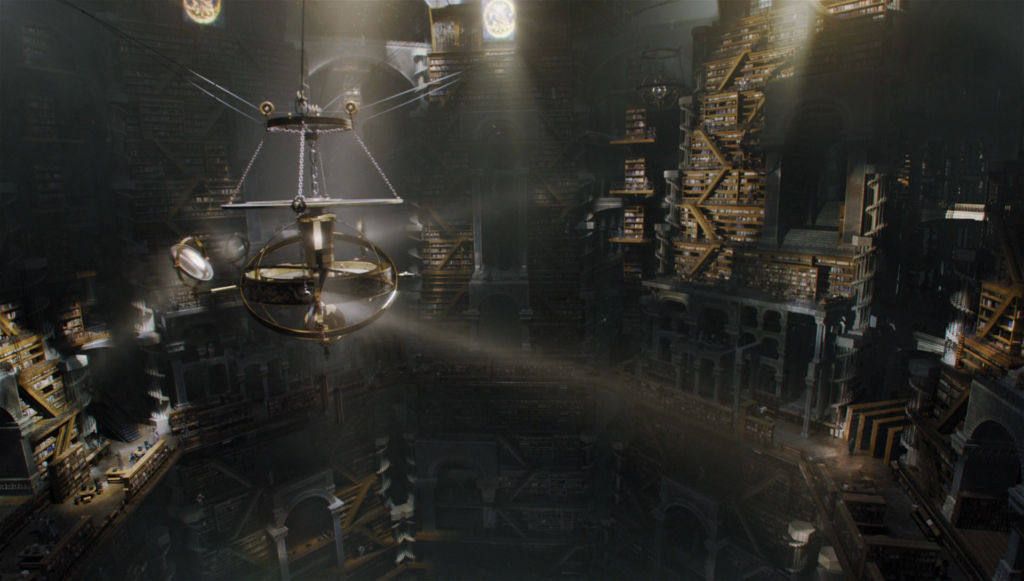 I personally have not heard the Dolby Atmos track for Season Six, but I did experience it during the IMAX showings for Season Four, and let me tell you, it is incredible. There are no glaring audio issues with this release, as dialogue was crystal clear and volume adjustments were minimal. The Atmos track is extremely loud, which is awesome for those with a great home theater system, and my SVS Prime system got a great workout. Audiophiles will be very pleased with this release.

Game of Thrones Season Six comes packaged in a lenticular slipbox, with a folding cardboard interior that houses the four Blu-ray discs. The slipbox features an image from the Many Faced God’s wall of faces, with some of the show’s main characters. The lenticular action is a simple back and forth motion with the character’s faces. There is a cardboard slip that goes around the slipbox, and on the inside there is a digital copy that can be redeemed on both iTunes and UV services, as well as a 20% off coupon for Game of Thrones swag at the HBO Online Store. Overall, the packaging on the inside of the slipbox could have been better, but the outer image is very nice and has a lot of shelf appeal. 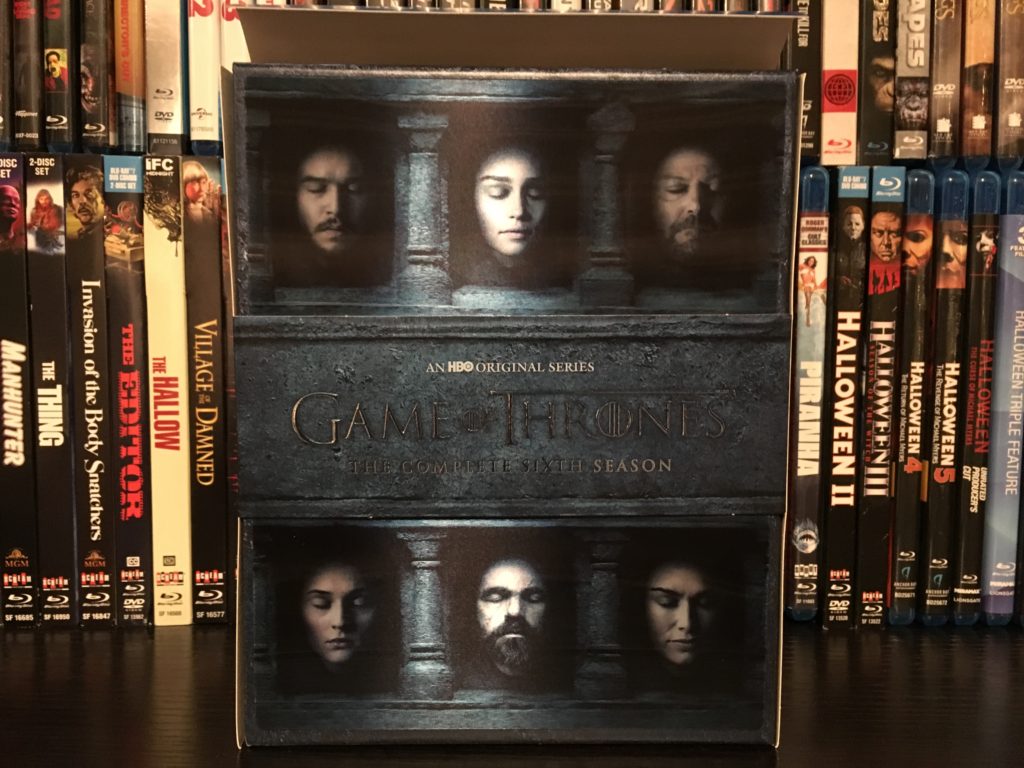 This is the best work yet from HBO when it comes to special features, as the list goes on and on with this release. Game of Thrones has so much going on, that if the special features were any less it would be a disappointment, and HBO has done an amazing job with their best season yet. The features are as follows: 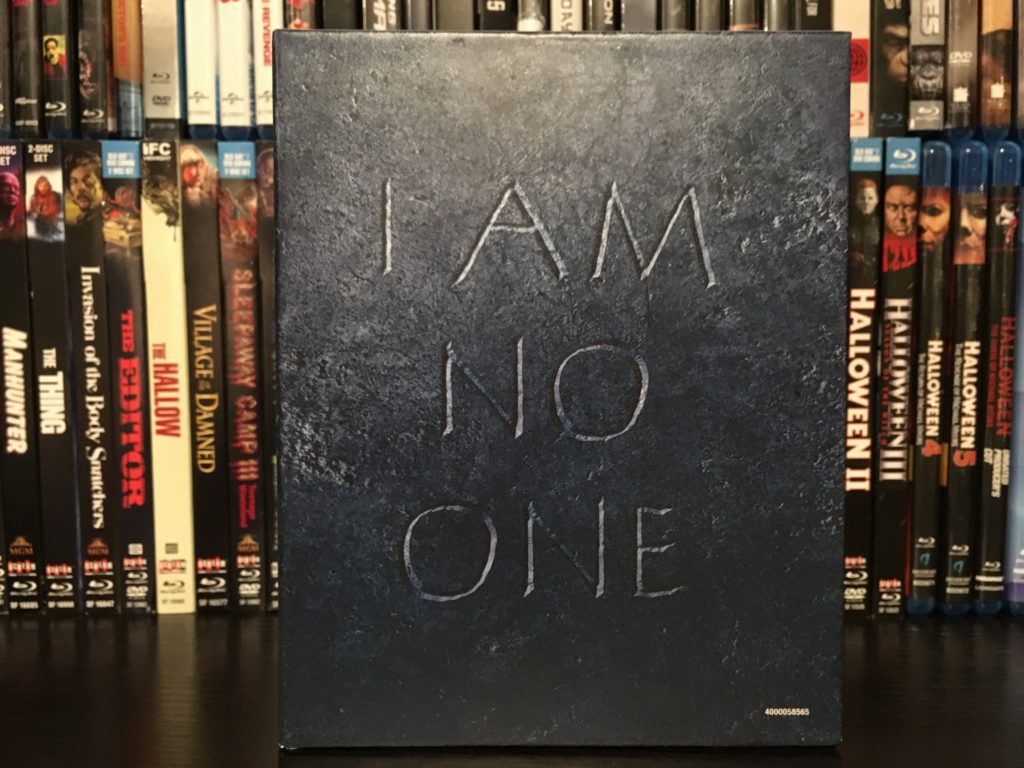 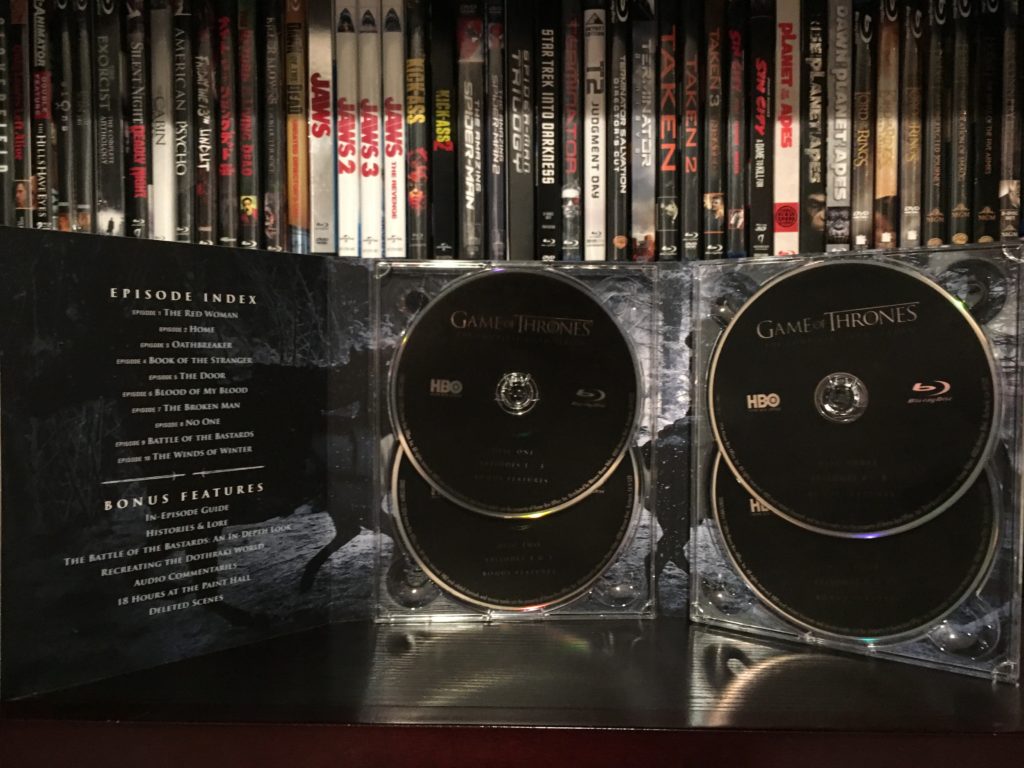 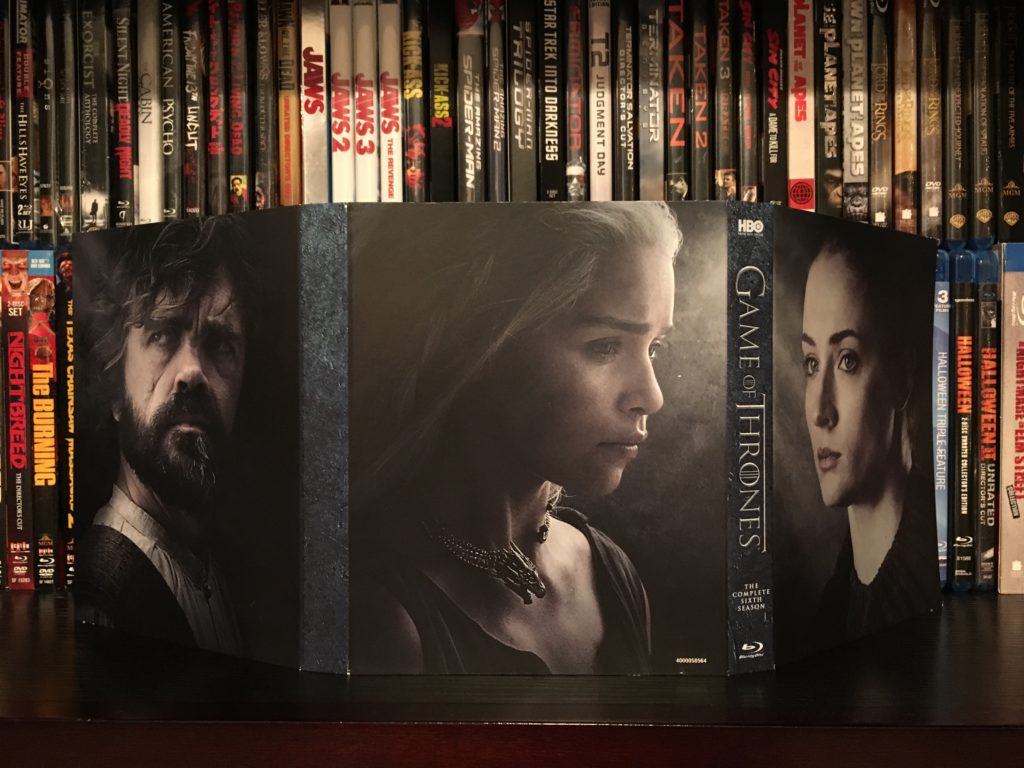 Outside of the eventual Complete Series set, this set of features is the high point of any release for 2016, on any format. From the extensive commentaries to the informative Westeros history lessons narrated by major players of the cast, HBO has gone above and beyond for this release. There is simply so much for fans to go through, and while still at a reasonable price point, the Season Six Blu-ray release for Game of Thrones is a can’t-miss.

If you are interested in buying Season Six of Game of Thrones, chances are you have either caught up with the show via physical media purchases and you are waiting for this release to start Season Six, or you are a hardcore fan who has seen every episode as it aired. Either way, this is a no-brainer recommendation for purchase. The packaging is excellent, the visual and audio quality is top notch, and the special features are probably the most extensive of any 2016 release. Fans of the show will drool over the bonus content included here, especially with the long wait we have before Season Seven airs in the Fall of 2017. I highly recommend grabbing Game of Thrones: The Complete Sixth Season, and you can find it on Amazon or at retailers everywhere. 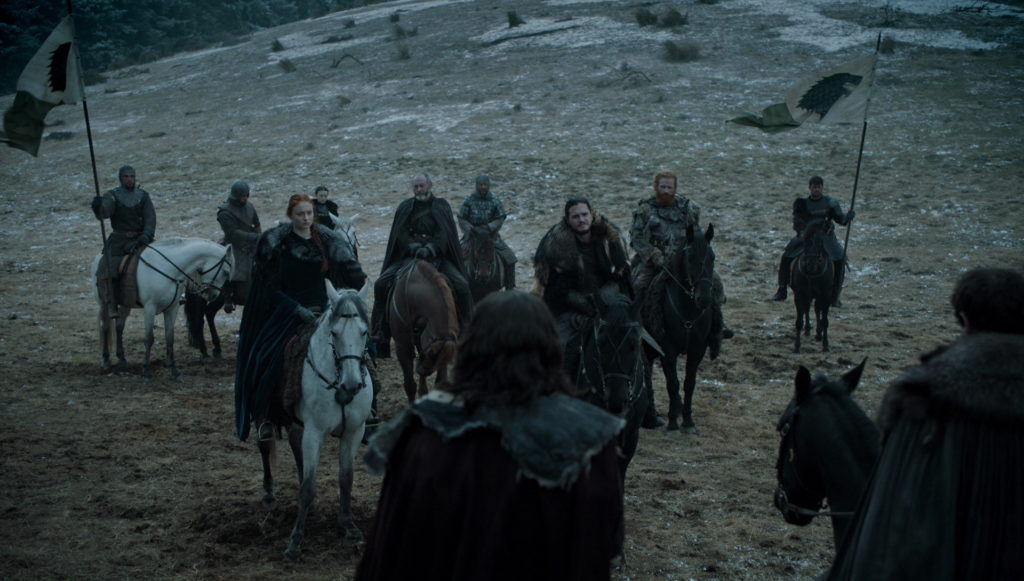