It seems like most science fiction fans have a core fandom to rally around. You have the franchises Star Trek, Star Wars, Babylon 5, etc. I’m personally a fan of all three. But when you have a fandom that is large enough, there is a lot of comic material to use for parody and referential comedy. Spaceballs serves as the definitive parody for Star Wars. Galaxy Quest hopes to be the same for Star Trek and the fan culture surrounding it. But does it pull it off?

Galaxy Quest centers around a group of actors from an old science fiction series much in the vein of Star Trek. We have the space ship with a command bridge just like the Enterprise, a commander with the strong presence leading the team, an alien friend and foil to the commander, a woman on board for her beauty, and even a kid (Obvious nod to Wil Wheaton). We even meet an actor that played a red shirt on the show. All bases are covered in character homage and parody, but the real strength of these characters is in the cast. This film boasts Tim Allen, Sigourney Weaver, Alan Rickman, Tony Shalhoub, Daryl Mitchell and Sam Rockwell playing the cast of the crew. Thrown in for good measure, we have Justin Long in is first role as a convention fan and familiar TV actors Enrico Colantoni and Rainn Wilson as Thermian aliens.

As we start the movie, we are brought into a typical sci-fi convention. We have hordes of fans waiting for a panel and autograph signing for the cast of the “Galaxy Quest” TV series. In the dressing room, we see the cast members waiting to go out on stage contemplating their careers and their status as has-beens. Alan Rickman’s character laments how he was once a serious stage actor with a promising future that is now only known for playing an alien and relegated to making the rounds on the convention circuit and low-level sponsorships. Sigourney Weaver’s character reflects on how she never had any importance on the show. Tony Shalhoub is mostly just checked out and going along for the ride. The only one who truly enjoys their situation is Tim Allen’s character that happens to be living in equal parts former glory and the adulation of his fans.

Their funk of the touring the convention scene is interrupted this day by a group of aliens known as Thermians who need help from the crew. These aliens have been watching the broadcasts of this series and believe them to be historical documents. The Thermians, in addition to being incredibly awkward in movement and speech (you’ll learn why), need help in defeating a tyrannical alien conqueror. They can think of no one better than the great crew that they have watched defeat countless enemies. Next thing we know, this group of washed-up actors find themselves over their heads on a real spaceship, adventuring to other planets and engaging in spaceship battles. 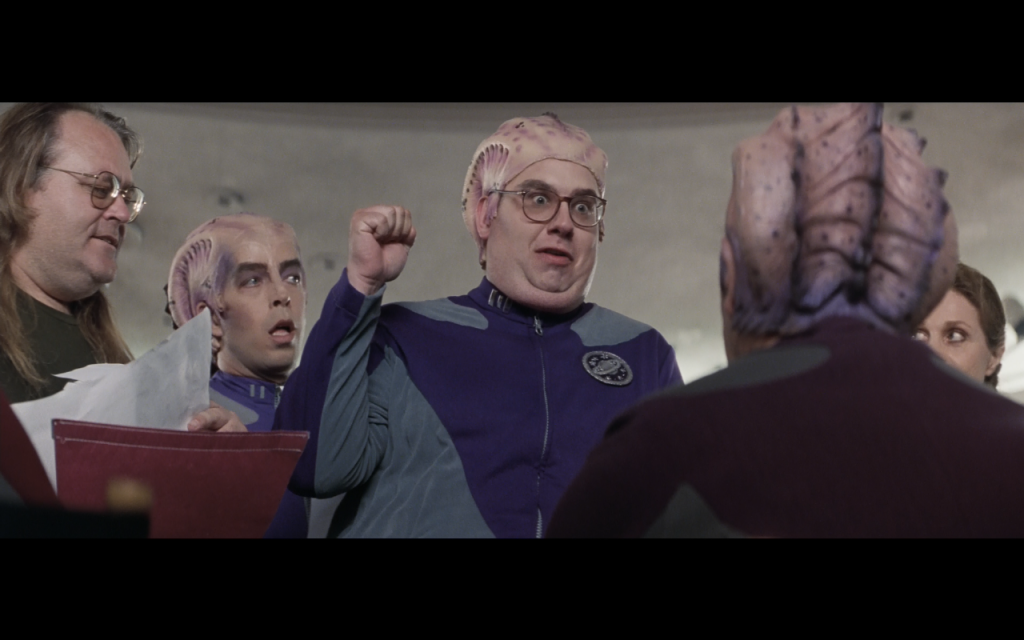 During their adventures, each one learns that they have more to offer than just being a washed-up TV actor known for just one part. They each manage to utilize their archetype for a part of this adventure, but also learn that they don’t have to be constrained to only that. One of them even finds a little romance. A handful of supernerds we meet also get to play a role, helping the stars of the show that they have idolized and invested way too much of their life in.

The result is a film that works both for people who are fans of Star Trek and similar styled science fiction and those who have no sentimental attachment to such entertainment, such as my wife. Galaxy Quest parodies frequently, but not disrespectfully. While making fun of some of the weaknesses of typical sci-fi characters, it also extols the strengths of the characters and shows how the characters could be stronger than their archetype. It does this while also successfully poking fun at the convention world and fans that are far too lost in the fiction. It wants to point out that this is all supposed to be fun and not taken too seriously, but acknowledges how good it can be to indulge in the fantasy.

The special effects are pretty solid and often practical. The visuals are quite pleasing and take you into the film effectively. Likewise, with such a strong group of actors, they all seem to shine in different ways. This enhances repeat viewings of the movie as each time you can notice more of what each actor brings to various scenes. There have been times where I am sold that Alan Rickman is the best part of the movie, but the next time I watch it, I am convinced that Tony Shalhoub steals the show. Really there is no shortage of great performances in there.

Honestly, I don’t see how anyone who likes sci-fi comedy wouldn’t be able to enjoy this. A Trekkie should be able to enjoy this just as much as someone who can’t stand to be around them. The humor hits solidly and the homage is generally spot-on. Galaxy Quest is solid and gets better upon revisit.

This disc has a pretty strong image that is up to the task and showcases the action quite well. When not inside the cool metallic and gray spaceship, the image does shine. The blacks look true to black, skin tones look natural, aside from the Thermians, who look like they haven’t been outside in a decade. The picture quality only suffers from a few weaknesses here and there.

An equally strong, but imperfect audio mix is included on this disc in the form of a lossless Dolby True-HD 5.1 track. Also included is a 2.0 track for the Thermian language audio track. Appropriately powerful and enveloping when called for, but also quite effective on the delivering the small details. Balance shows no glaring weaknesses, and this is a solid overall surround mixing.

Galactopedia – Displays information during playback of the movie.

Historical Documents: The Story of ‘Galaxy Quest’ – Interviews with the cast and crew about the film’s influences.

Never Give Up, Never Surrender: The Intrepid Crew of the NSEA ‘Protector’ – More interviews with the cast and crew. This time focusing on how the characters were developed into what we see on the screen.

By Grabthar’s Hammer, What Amazing Effects – Short look on the makeup and special effects of the movie.

Alien School: Creating the Thermian Race – Focuses on how the Thermians were developed by the actors and how they met daily to further develop how they would behave.

Actors in Space – A look at the cast performances to parody the archetypes for their roles.

This is an extensive set of extras. I always enjoy the behind the scenes interviews and these ones are great. They are a good replacement in lieu of a commentary track. It was fun learning how they came about making the alien behavior, and the Thermian audio track is a pretty cool inclusion, though I doubt anyone would actually go through the whole movie listening to it. 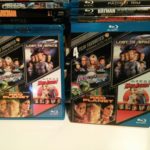 Galaxy Quest is available in a single disc Blu-ray release, but when I bought it, I picked it up in a bargain four pack shown below.  Effective, but basic packaging that I don’t really mind aside from two discs stacked on each hub.  I would personally much prefer to have a double-sided inner tray to have a third and fourth hub, even if it made the case a little thicker.  As it is, I have to encourage you to pick up the individual release instead. This bargain packaging really brings down the overall score, but the individual release would be a better option.

I have no reservations in marking this an outright buy. I bought this in a bargain pack primarily because I wanted two of the movies and neither were AAA titles. Getting those two movies with a couple coasters for $12 seemed pretty solid deal to me, but the stacked discs really do suck. If you only want Galaxy Quest, it is certainly worth the sub-$10 price it tends to go for and the packaging is better than my bargain four pack. The premise is fun, the comedy is solid, the performances are all around on-point, and the action is pretty decent. If you like sci-fi and comedy, its hard to go wrong with Galaxy Quest.