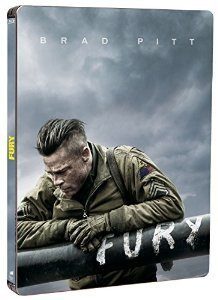 World War II is one of Hollywood’s favorite subjects, and it clearly interests star Brad Pitt as he appears in his second film on the subject in just five years. Fury, directed by David Ayer and starring Pitt, Jon Bernthal (Shane from The Walking Dead), Shia LaBeouf, Michael Peña, and Logan Lerman (The Perks of Being a Wallflower), is the most realistic WWI combat film I have seen since Saving Private Ryan (one of my “must-have Blu Rays). It brings the grittiness of the war to the screen and does not shy away from any of the horrors of the terrible conflict.

The version I own is the Target steelbook (pictured right), found here. It has some excellent artwork on the front, back, and inside, but only comes with the Blu Ray and a Digital Copy. If you are looking for the standard Blu Ray/DVD combo pack, you can find that version here. It is currently priced at around $15 on sale, and is well worth picking up for that price as I can not see such a quality film dropping much lower than that price anytime soon.

As mentioned above, Fury’s picture quality delivers the gritty, gray. and dreary look that is required of any World War II film in order to accurately portray the mood during the conflict. With this film taking place in some of the War’s darkest days towards the end of the conflict deep in German territory, it was necessary to get this feeling across with a darker video presentation. However, at times the video seemed so dark, especially within the confines of the tank and during the climatic scene at night, that it was very hard to follow what was happening. I watched in a very dimly light room with no windows, and so there was no outside light interference which can make the darker scenes of certain films nearly impossible to see. Be prepared to watch this one in a dark environment if you want to enjoy the aforementioned scenes.

This being said, the rest of the film looks fantastic. If you have seen Saving Private Ryan, the picture quality is equally comparable to that in terms of the graininess, color, and dreary tone. The fight scenes are fantastic and the visual appeal of two or three tanks fighting on an open landscape is worth watching for alone. The color, although typically gray, also has some exciting moments during the fight scenes. When the tracer rounds are fired from the two opposing tanks and heavy machine guns, the vibrant green and red coloring that the tracers carry makes for an extremely realistic viewing experience.

Presented on a DTS-HD 5.1 Master Audio track, the audio is Fury’s best asset. With the film being focused on tank warfare, the sound needed to be exceptional in order to give an accurate representation of the intensity of the fighting. The whizzing of anti-tank rounds, heavy machine gun fire, grenade explosions, and fly-over bombing runs were all extremely satisfying. As planes flew overhead, you could hear the engines travel from your rear speakers to your front and center speakers, creating the immersive home viewing experience that should be expected of all HD media. Dialogue was clear, even over all of the fighting and whizzing bullets, which means that the center speaker was appropriately used as the driver for the dialogue, while all other action was directed through the side and rear speakers. This is especially important in films like Fury, as the outside noise should never drown out the dialogue. There is nothing more annoying than adjusting your volume to reflect the change in scene. The ideal home viewing experience offers a smooth transition in volume from a dialogue driven scene to an action driven scene, and Fury is certainly ideal in this respect.

Fury has an impressive amount of extras for a standard release, with almost an hour’s worth of deleted scenes, and several short features ranging from 11-20 minutes in length, as follows: 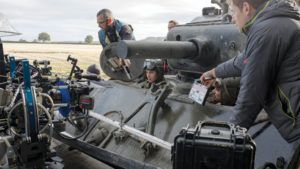 Director’s Combat Journal – 17 minute piece detailing director David Avery’s creative process, editing of the film, and technical details involving the tanks and how to film in such a complex arena.

Taming the Beasts – 13 minute feature on the process of securing real WWII tanks for the film, and learning how to operate and maintain these massive, 70+ year old monsters.

FINAL VERDICT: Fury is a must-own Blu Ray. With a top-notch audio track and a substantial amount of extras, this one is worth buying for your collection immediately!