When it comes to horror, there are a lot of concepts that seem like they should be an easy slam dunk. At the same time, some of these concepts seems like they are missed time and time again. One of the easiest concepts is “the funhouse,” a story setup where every one of the actors is actually a real psychopath; yet I can’t recall one time where this has been done effectively. Even Tobe Hooper’s The Funhouse, which was worthy of the Scream Factory Collectors Edition treatment, is honestly kind of a drag. Now Scream Factory is giving us the most recent attempt at putting the FUN back in funhouse horror, with it’s release of The Funhouse Massacre. Does it live up to the two most important parts of it’s title, “fun” and “massacre”? You’ll have to head on through the turnstile to find out!

Alright, let me check your expectations right at the ticket gate; if you’re not already a fan of the genre, The Funhouse Massacre most likely won’t change your mind. I’ll be completely honest; my expectations going into this film were quite low. I’m a fan of pretty much any film or TV show that takes place in a carnival, funhouse, fair, amusement park, or anything that can add a bit of whimsy to the story, so The Funhouse Massacre was a no brainer pick up for me based solely on that aspect. I’m ecstatic to say that on top of the obvious expectation of having people murdered in a funhouse, it actually ended up being one of the best horror comedies we’ve been served up in a long time. For what it is, The Funhouse Massacre is a fantastic movie, and an extremely fun one at that.

The concept here is straightforward enough to get the ball rolling on the movie. A group of psychopaths from a mental institution (operated by Robert Englund) escape to a funhouse on Halloween. Interestingly enough this asylum is filled with patients so dangerous and deadly they did not even get fair trials. As a bonus, the funhouse they escape to also happens to be themed after their specific murder sprees. Yup. There’s also some throwaway plot exposition about how the owner was manipulated to craft it this way and that this was all the part of some elaborate plan all along. It’s a bit of an eye rolling plot to wrap your head around, and early on in the movie I allowed myself to get a bit too wrapped up in the logistics of the whole thing, but this is a splatter filled horror movie filled with laughs, so who cares? Our cast of maniacs features an underground wrestling clown (Mars Crain), a lethal dentist (Sebastian Siegel), a taxidermist specializing in humans (Clint Howard), a cannibal chef with exquisite taste (E.E Bell), their Charles Manson-esque leader (Jere Burns), and his serial killer daughter, Dollface (Candice De Visser).

It’s an extremely fun bunch of villains, all played very effectively by their respective actors. Once they take their positions in the funhouse and the gates are opened to the public, the movie immediately kicks into high gear and never quits. One thing I always find unsettling is when real violence and murder is cheered on by witnesses who think it’s all a big gag. The Funhouse Massacre has this in spades, and it leads to some genuinely creepy moments as people bear witness, doing nothing as actual murder is being committed in front of them. It’s a brutal film that will satisfy the gorehounds as the colorful walls of the funhouse are drenched with blood and all sorts of different body parts go flying. Heads are squished, brains are drilled, throats are cut, guts are disemboweled, backs are broken, necks are impaled, faces are ripped, and all sorts of brutal instruments are used in cringe-inducing ways. All of this carnage looks absolutely marvelous thanks to special effects produced by the legendary Robert Kurtzman!

The Funhouse Massacre does the always difficult job of walking the tightrope of terror and comedy splendidly. The movie is actually incredibly funny, and well written to boot. Most of the characters are rather enjoyable, and you’re given a bunch of different people to root for as the film reaches its climax. The Funhouse Massacre also manages to subvert some expectations of the genre in certain parts, which I’m always happy to see. I’d say the story kind of falls apart and becomes an even bigger mess by the end, but honestly, it doesn’t really matter all that much anyway. All the other pieces add up to a very fun ride that I think all but the most jaded fans will enjoy. There was some genuine effort put in to making The Funhouse Massacre a better movie than it’s concept should ever allow; its definitely one I’ll be revisiting at Halloween.

The Funhouse Massacre actually looks quite good for a movie of it’s ilk; shot digitally on an Arri Alexa, its no surprise that certain aspects of the picture do come off a bit flat. For the most part, though, we have a crisp looking picture complimented by instances of fun cinematography, and one of the most gloriously full color palettes you’ll see in a horror movie. I had no complaints on the image quality while watching The Funhouse Massacre, and I was actually more impressed than I ever expected to be at certain uses of lighting and camera movement. Even if its one that’s not going to blow away home theater enthusiasts, it’s overall a very fun movie to look at.

Presented in Dolby DTS-HD 5.1, The Funhouse Massacre has a very solid sound mix, with no issues between volume of music or sound effects and dialogue. I’m no audiophile, but this is a horror movie that takes place in a funhouse, and it effectively sounded like that. The most disappointing aspect regarding the sound of this film is that any particularly great sound effects in the film are most likely drowned out by the mediocre and generic horror rock that accompanies everything. This music is honestly just downright boring, and my least favorite type of score for horror movies. The Funhouse Massacre is a much more enjoyable visual affair than it is an audio one, but it still sounds completely serviceable.

Unfortunately, for a release from Scream Factory, this a fairly bare bones package. The most exciting aspect to me is the reversible artwork on the sleeve; personally, I think the reverse art is much better than what is showing on shelves, and its definitely a wasted opportunity for a nice slipcover. Jumping into the bonus features, you’ll find an audio commentary with Director Andy Palmer, Clint Howard, and Sandy Gains, the theatrical trailer, less than 10 minutes of productions diaries (which pretty much amount to selfie videos with the cast from set), and a “Popcorn Talk Watchalong”, basically an additional commentary with video of the film with the director and two writers/co-stars. The movie has wonderful production design and special effects, so it’s sad that we didn’t get some better or more informative featurettes detailing these aspects. Definitely a missed opportunity to show off the work they put in. 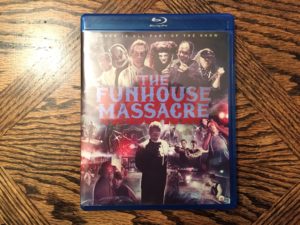 While this Blu-ray release certainly isn’t spectacular (or even above average) by any means, I still give The Funhouse Massacre a full recommendation to genre fans based on the merits of the film alone. This is the type of low-budget horror filmmaking we need to support, despite a few flaws and some wonky writing. It’s easily one of the better horror comedies in a long time, and dare I say, Tobe Hooper should take some notes, because I’d go as far as to call it the best funhouse horror movie ever. It’s really everything you could ask for when presented with the concept. It’s funny, bloody, fast paced, and fun to look at, with a cast of enjoyable characters on both sides. As far as I’m concerned, you can’t ask for much more in this type of genre piece. If you’re looking for a horror movie that won’t ask more of you than to kick back, laugh, and cover your eyes from time to time, you won’t get much better than The Funhouse Massacre. Grab your ticket and hold on to your head! Everyone else is welcome to wait by the exit sign.