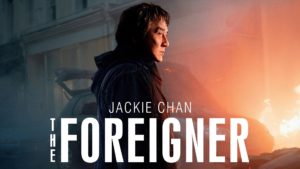 The Foreigner is a 2017 Netflix original film starring Jackie Chan and Pierce Brosnan, based on the book The Chinaman by Stephen Leather and directed by Martin Campbell.

The film centers around Chan, playing the titular character – Ngoc Minh Quan, vying for revenge after a bombing by a group calling themselves “The Authentic IRA” kills his daughter. Quan originally tries to bribe the police to tell him the names of the suspects, before turning his attention to ex-IRA-turned-politician Liam Hennessy (Brosnan). When he refuses, Quan uses his special forces past to try and get the information he wants.

The Foreigner is Campbell’s first feature since 2011’s widely panned The Green Lantern. It marks the first collaboration between Campbell and Brosnan since GoldenEye (1995).

The film is one that plays heavily on its strengths. The character work is really good and expertly crafted throughout the film by the actors. The negative with the film, however, stems from this positive. The care taken over the characterisation and building of the characters lives means that it overlooks other aspects of  the filmmaking process, namely the cinematography.

The performances of Chan and Brosnan are magnificent and elevate the film greatly. Chan really shows his acting chops in this, going against the comedic roles he is now synonymous with in Hollywood, and beautifully portraying a father wounded by his past and grieving heavily. Chan had stopped being a draw to films for me personally, but after watching him in this, I may have been swayed otherwise, especially if he takes on more dramatic roles.

As for Brosnan, this is his best performance since Polanski’s The Ghost Writer (2010). He expertly plays Hennessy, a professional politician, who remains cool throughout most of the film, occasionally showing streaks of anger, as his life and career begin to spiral out of control. Parts of his chequered past start to haunt him and his character transforms accordingly.

The story is good. It’s well-paced, with plot points and set-pieces placed well within the story. The plot depth increases gradually in a relatively nuanced way, which I feel is important with The Foreigner, because the story is layered enough to have had the potential to get confusing. The action sequences are great, which you should expect from Jackie Chan as par for the course by now, but the supporting cast hold their own in that sense too. 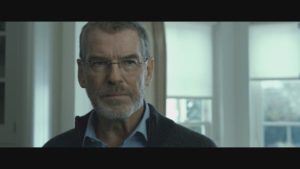 The Foreigner is a very character and plot driven film, and this sadly makes the cinematography and visuals take a back seat. The backdrops and scenery are not particularly interesting, though the picture quality on Netflix is very crisp, clear and of a high standard which makes the lack of interesting visuals a bit more of a drawback, it did mean however, that the explosions from the bombs looked great.

The audio is fine. It’s nothing to write home about, but it does the job well. The dialogue is clear, and the action scenes sound good. My main gripe with the audio is surprisingly from Cliff Martinez’s score. I expected great things from Martinez, given his musical past and track record, particularly from his work on Nicolas Winding Refn’s The Neon Demon (2016) and Only God Forgives (2013). But in The Foreigner the score felt out of place for me. It was bland and began grating on me at points in the film due to it simply not making sense with the scenes. 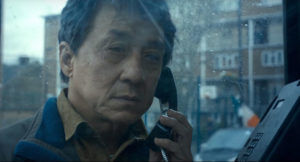 The Foreigner is out now on Netflix in both the UK and the US, and was released on DVD and Blu-ray on January 9th in the USA, with a UK physical release date yet to be confirmed. 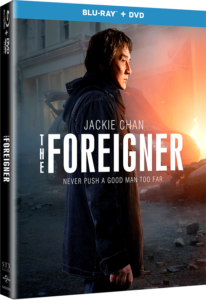 All in all I was surprised by The Foreigner. It was a well-executed revenge film, with truly amazing performances from the cast. I recommend watching it even if you don’t think it’s for you; you might be surprised. 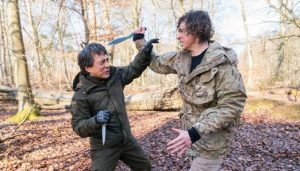