Flash Gordon is a 1980 space opera film that is based on the King Features comic strip of the same name that was created by Alex Raymond.
Directed by Mike Hodges and produced by Dino De Laurentiis, the film was originally shot in Technicolor and Todd-AO-35 and stars Sam J. Jones, Melody Anderson, Topol, Max von Sydow, Timothy Dalton, Brian Blessed and Omella Muti.  The film was co-written by Michael Allin (known for Enter the Dragon) and Lorenzo Semple Jr. (who had previously scripted De Laurentiis’ remake of King Kong) and uses a camp style that is similar to the 1960s TV series Batman (which Semple developed) in an attempt to appeal to fans of the original comics and serial films.
Although a box office success in the United Kingdom, it performed poorly in other markets.  The film is notable for its soundtrack, which was composed, performed, and produced by the rock band Queen, with the orchestral sections by Howard Blake.  The film has since gained a significant cult following.

The Film Itself (4/5):
Flash Gordon is a movie that I’ve never seen until sitting down with this release. Mostly because it only had just grabbed my attention and really a lack of pursuit into that curiosity; but I am happy to say that now I’ve watched it, I had a lot of fun with this movie. Technically speaking, this movie takes itself WAY to seriously for something that is executed so hilariously. The movie as a whole is chock full of schlock that were definitely recognized by the cast during filming that they did a really good job at refraining from simply laughing. The story bears no significant cinematic merit; but it does fall right in line with the silliness of those earlier science fiction films that were made on a tight budget. I know that I’ll definitely be recommending this among my friends that haven’t seen it.

The UHD release of Flash Gordon is brought to us courtesy of Arrow Films. Within the release, there is a booklet that offers some additional information on what measures went into the restoration efforts:

Flash Gordon has been exclusively restored by Studio Canal and is presented in its original aspect ratio of 2.35:1 with 5.1 and stereo 2.0 sound.

The colour grading including HDR Dolby Vision, REC709, and XYZ for DCP. The grading was approved by Director Mike Hodges.

Because work was carried out at such a high resolution, the original “wire work” was clearly visible in some scenes. Mike Hodges made the decision to digitally remove or reduce these instances, given that they did not appear as prominently in the original theatrical prints or home video releases.

The audio was remastered from the original stereo tracks. The 5.1 was remixed and an issue with the LFE channel on the original 5.1 mix was corrected.

This restoration of Flash Gordon has been approved by Mike Hodges

Let’s just say, this release is and will very likely be the release to use when showcasing your 4K setup. Everything from the color palette to the saturation and depth of the visuals just really popped. The colors were much more refined and robust, the finer details of the scene went unblemished, it was simply beautiful.

Bundled with an English DTS-HD Master Audio 5.1 mix, the UHD release of Flash Gordon wasn’t all that bad. Sure, I had to bump my volume levels up a notch to hear things better, but the overall presence of the audio mix fell right in place with the experience that I had expected with this release. Offering viewers a more distinct experience than what you could get back when this film originally premiered, but also not really using the full technological benefit of the format. Dialogue was spoken cleanly and clearly and everybody was able to be heard and understood without any issues.

Arrow’s 4K release of Flash Gordon is packaged unlike your standard release. First, you have the two-disc amaray case. In that case is the 4K copy of the film, as well as a Blu-ray disc. While you would think that there would be a Blu-ray copy of the movie included with this release, that isn’t the fact. Buy, the Blu-ray disc that is included features a copy of the documentary Life After Flash as well as a pretty sizable set of special features. There is also an art book that’s included that features photos from different areas of the production processes, coupled with some writings about the work that went into the remastering process. There is also a folded poster included that features the same artwork that’s shared throughout the release. Lastly, there is a solid, thicker box that everything goes into to keep it together while on the shelf. 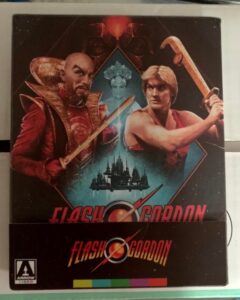 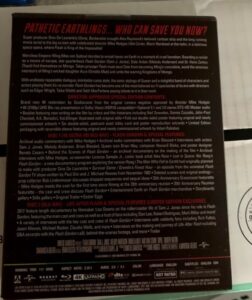 Man, Arrow Films did NOT disappoint with the supplemental material for this release. Both the UHD and Blu-ray come packed to the top with features that are worth checking out in every right. Included with this release is:

As you can see, this release is one hell of an introduction into the 4K UHD format from our friends at Arrow Video. With Flash Gordon they absolutely knocked it out of the park in terms of audio and video presentation, special features, and overall packaging; this release is the must have release for your UHD setup. If you’re looking to grab it, I would definitely recommend it. Flash Gordon is available on 4K UHD today.