First Blood is a 1982 American action thriller film that was directed by Ted Kotcheff. It was co-written by and starred Sylvester Stallone as John Rambo, a troubled and misunderstood Vietnam War veteran who must rely on his combat and survival senses against the abusive law enforcement of a small town. It is based on David Morrell’s 1972 novel of the same name, and is the first installment of the Rambo film franchise. Brian Dennehy and Richard Crenna also appear in supporting roles.

The film was released in the United States on October 22, 1982. Despite receiving mixed reviews in the beginning, the film was a box office success, grossing $125.2 million at the box office. Since its release, First Blood has received reappraisal from critics, with many praising the roles of Stallone, Dennehy, and Crenna, and recognizing it as an influential film in the action genre. The film’s success spawned a franchise, consisting of three sequels (all of which were co-written by and starred Stallone), an animated series, comic books, novels, and a Bollywood remake. A fifth film, tentatively titled Rambo: Last Stand, was cancelled in January 2016 when Stallone stated that he was retiring the character. In May 2018, a revised fifth film titled Rambo V was announced, and is scheduled for a fall 2019 release. 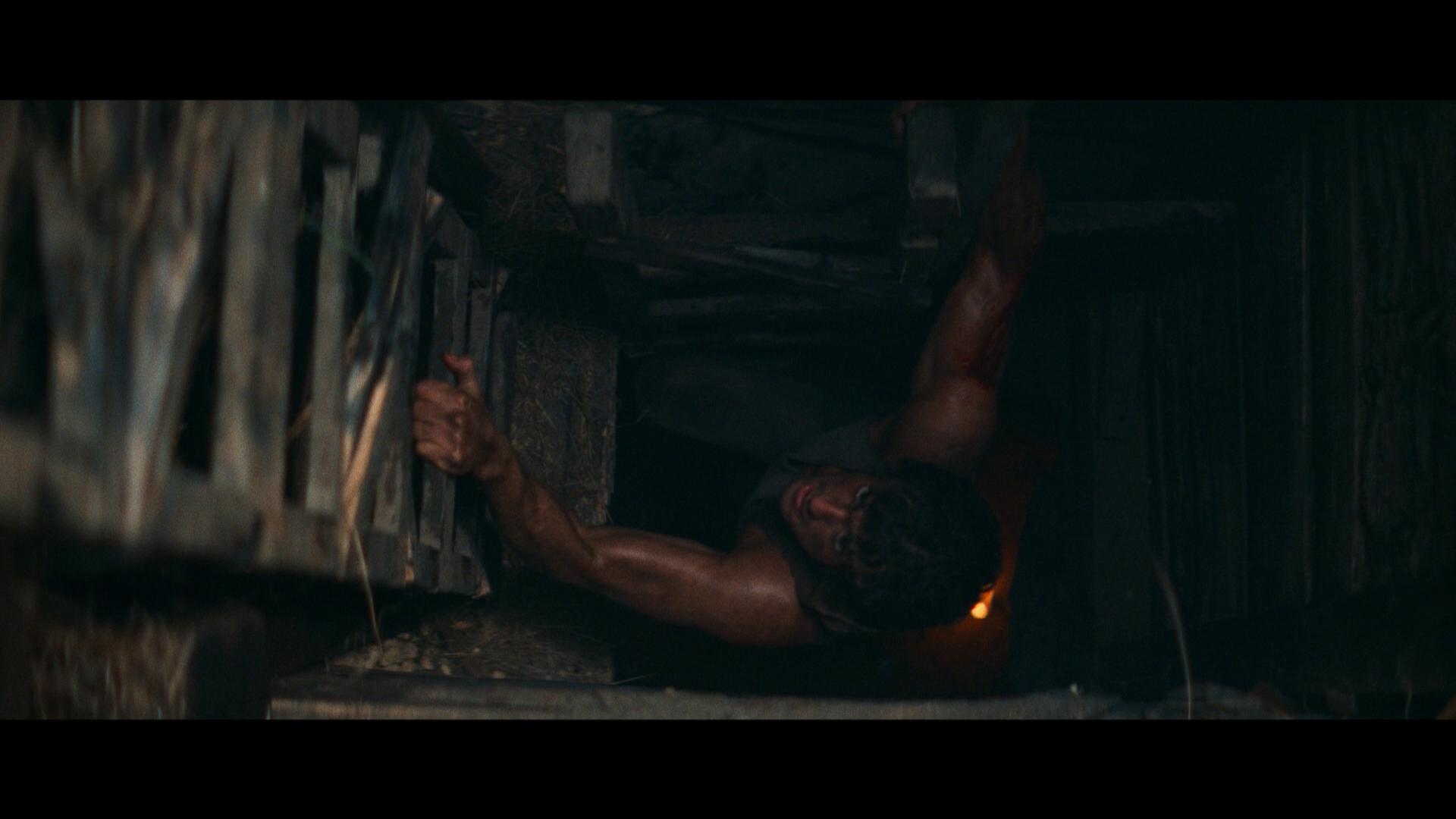 First Blood is a movie that, while it created the foundation of the action thrillers that have ultimately become classics to many, gives audiences a much darker series of events than the latter films of the series.  Absolutely taking full advantage of Sylvester Stallone’s skills, this thrilling adventure is loaded with a good amount of non-exploitative violence and simplicity that it really creates a rough start for the character.  Watching along with this release, I can completely understand why there has been some negative feedback on this movie; however, it has always been one that I can sit down to and experience a care free experience.  Not to mention, if we didn’t have this movie, it ultimately would have resulted in us not having the latter films of the series. 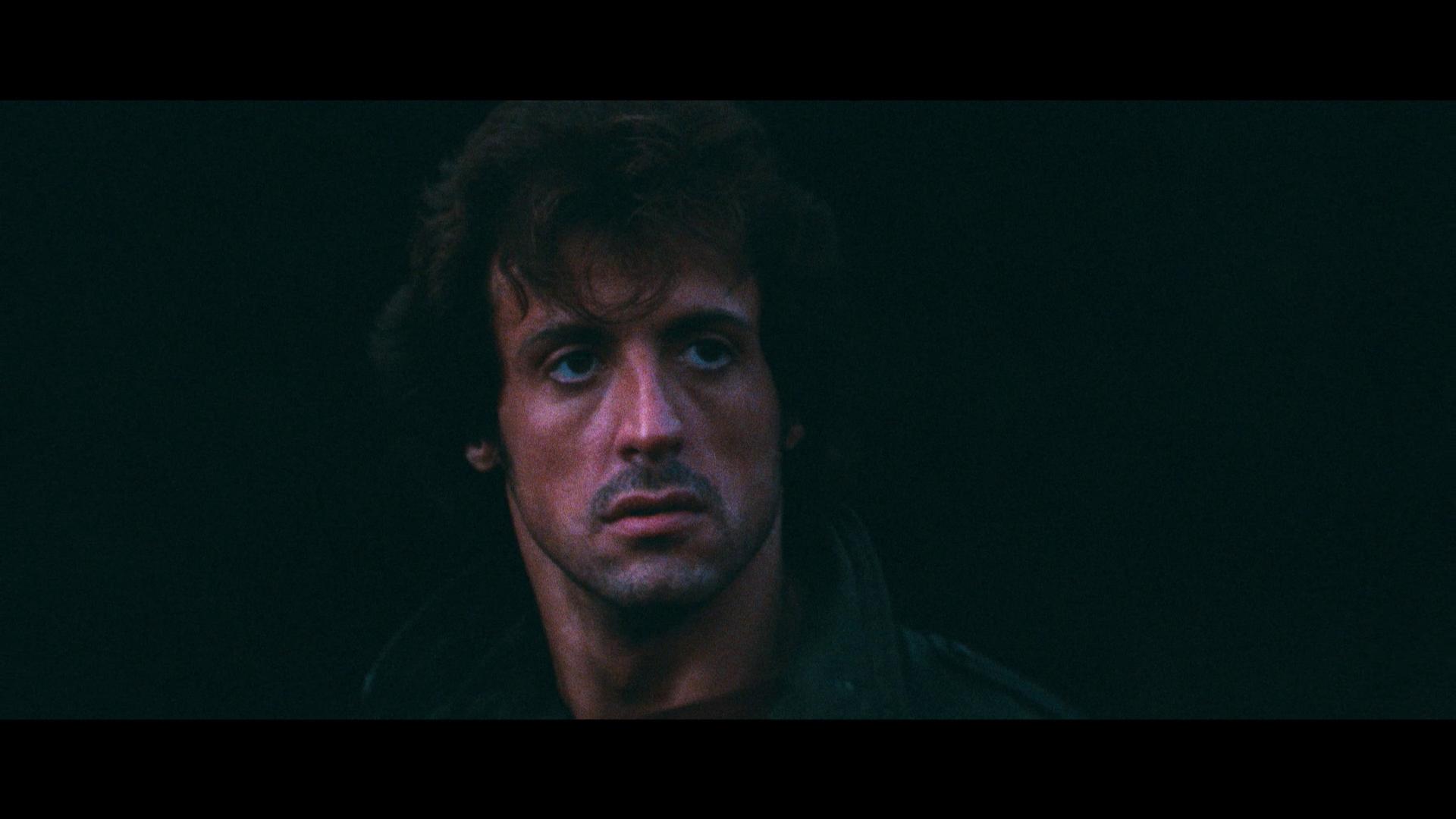 The 4K UHD release of First Blood offers a considerably better visual presentation than its previously released counterparts.  With its 4K native transfer, there has been some obvious tender love and care taken with the restoration of the film.  The quality of the details and overall sharpness of the image have seen a significant jump with the colorization being much more improved, making the overall presentation look like it has never before.  The black levels are most impressive with this release as they feel more natural and help to create a better picture with impressive saturation levels.  Facial details are very strong in this release, as the various marks of stubble, wrinkles, and seat beads stand out more than they ever have with this movie. 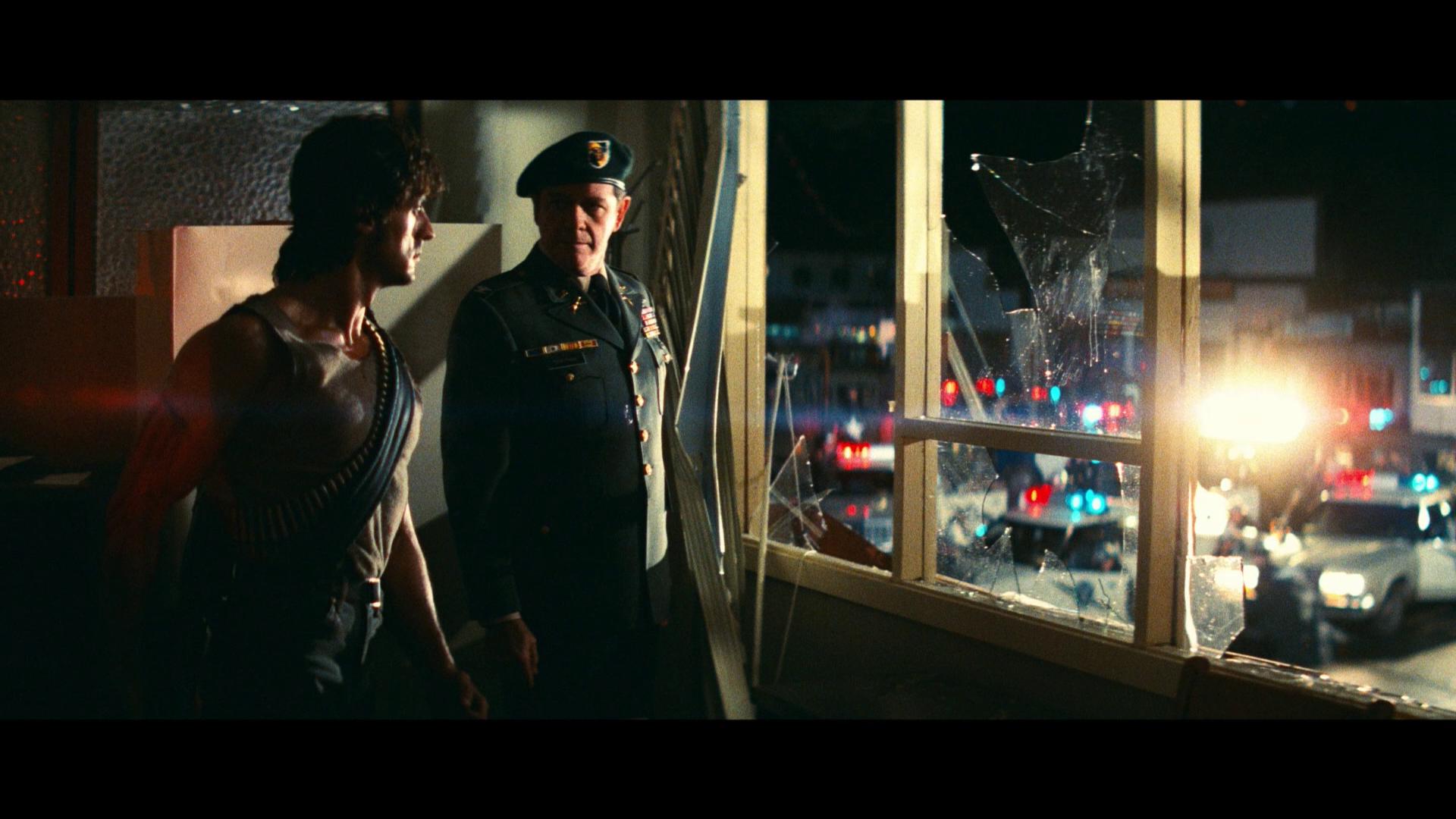 Packaged with an English DTS-HD Master Audio 5.1 mix, the 4K UHD release of First Blood offers nothing more than the previously released Blu-ray copies.  While it’s a shock to see that this didn’t get the Atmos or DTS:X treatment, the overall quality of the audio seemed to rip right through my home theater system.  With its lower frequencies really pushing the limits of my house’s foundation, the flows from channel to channel were effortless and helped with the overall immersion factor despite the lack of use of the surround or elevation channels.  The dialogue is spoken cleanly, and everybody was able to be heard and understood without the need to adjust the volume levels as it progressed. 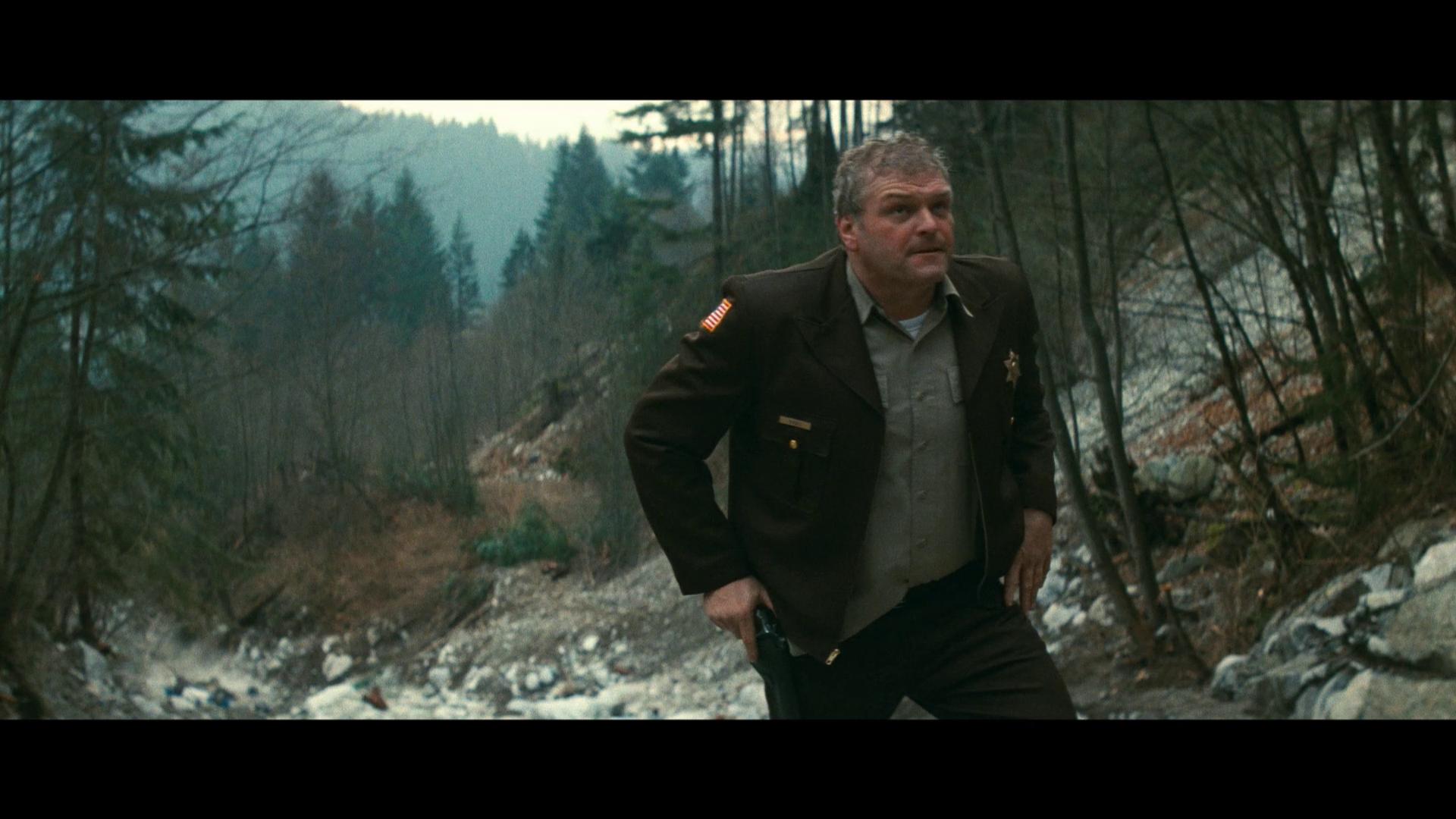 The 4K UHD release of First Blood comes packaged in your standard two-disc 4K UHD amaray case.  Within that case is the standard 4K copy of the movie as well as the standard Blu-ray.  Both discs do feature the same piece of artwork between the two, featuring Sylvester Stallone’s pose from the cover art.  There is also a digital copy redemption pamphlet that’s been included for the various streaming platforms as well as a slipcover that’s been made available during the original pressing of the release that includes the same artwork that’s been included on the case. 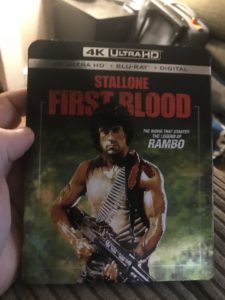 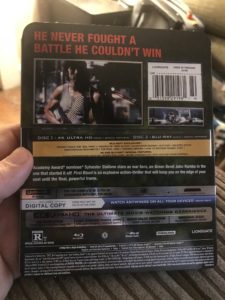 There are a ton of special features that have been included with this release of First Blood.  While the UHD only includes the two optional audio commentaries, all available content has been really made available on the included Blu-ray disc.  There’s a variety of content that’s been included that not only includes a look at some of the work that went into making the movie, but some also offers a small expansion upon the storyline.  Included with this release is: 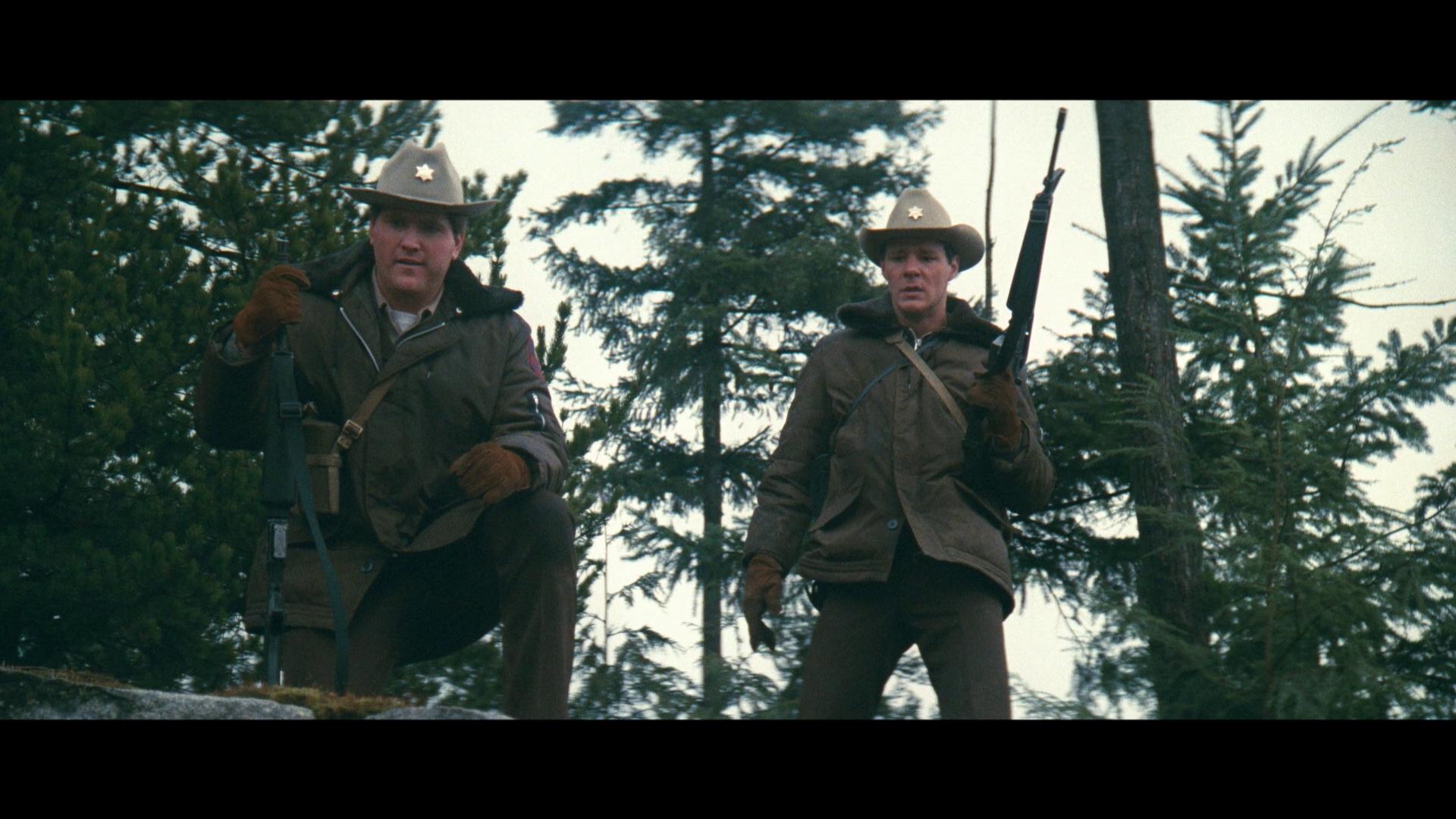 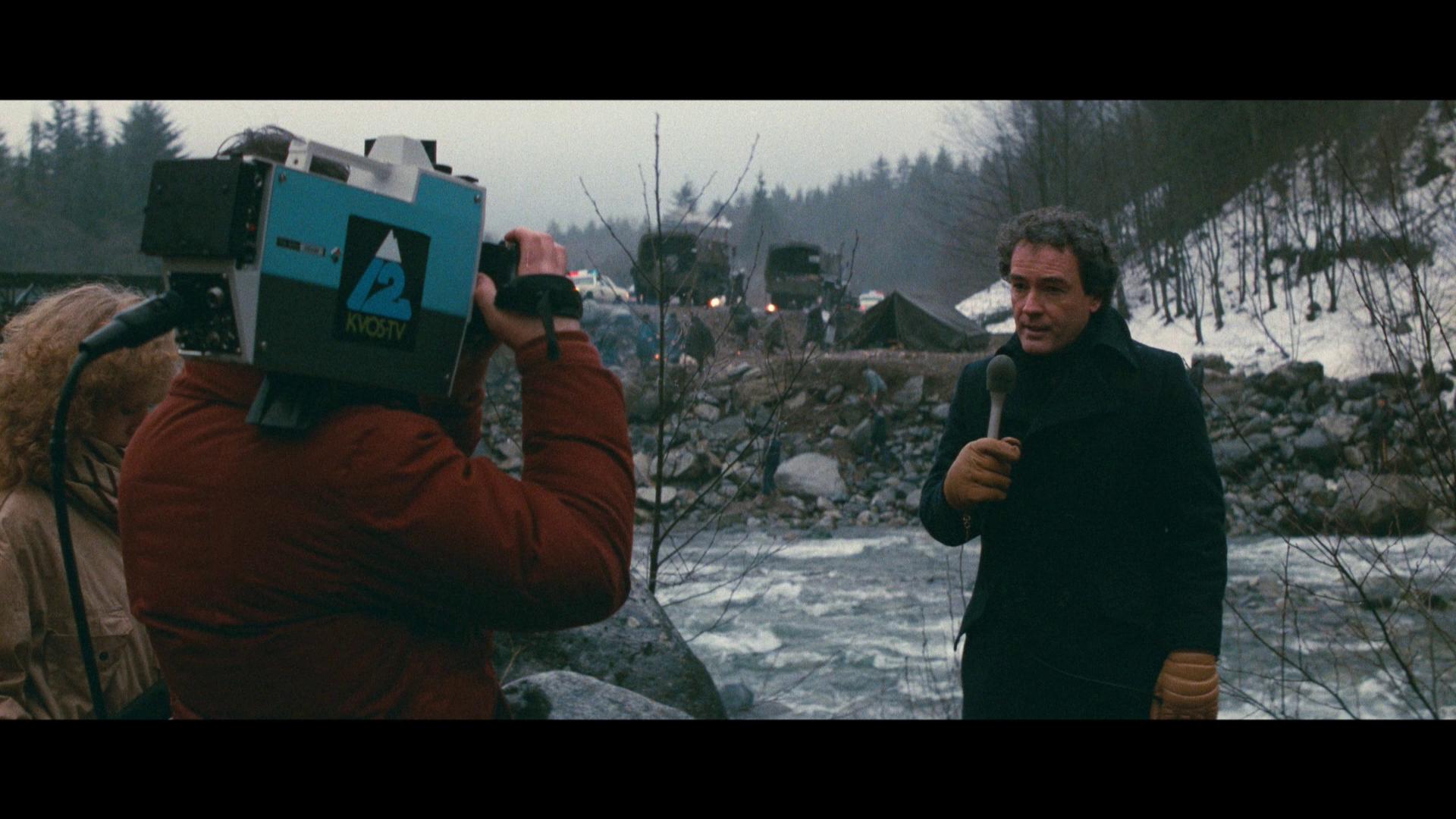 Overall, I was genuinely pleased with this release of First Blood.  While it has been quite a long time since I’d last watched this movie, I can certainly say that I was moreso impressed with the attention to detail that was given to the visual restoration of this release.  I do wish that they had not only opted to include the original audio track with this release, but that there was some attention to detail given with the remastered track to help separate the audible experience from its previously released counterparts.  There’s quite a few special features that have been included and spread out across both discs that’ll let you explore this release and film quite a bit.  If you’re considering grabbing this release for your collection, I can definitely recommend it if you either don’t have it yet or are upgrading your DVD copy.  Hell, even if you already have the Blu-ray copy, the price is more than reasonable to justify the upgrade, especially with the visual enhancements that are offered with this upgrade.  First Blood will be available on 4K UHD beginning on Tuesday, November 13. 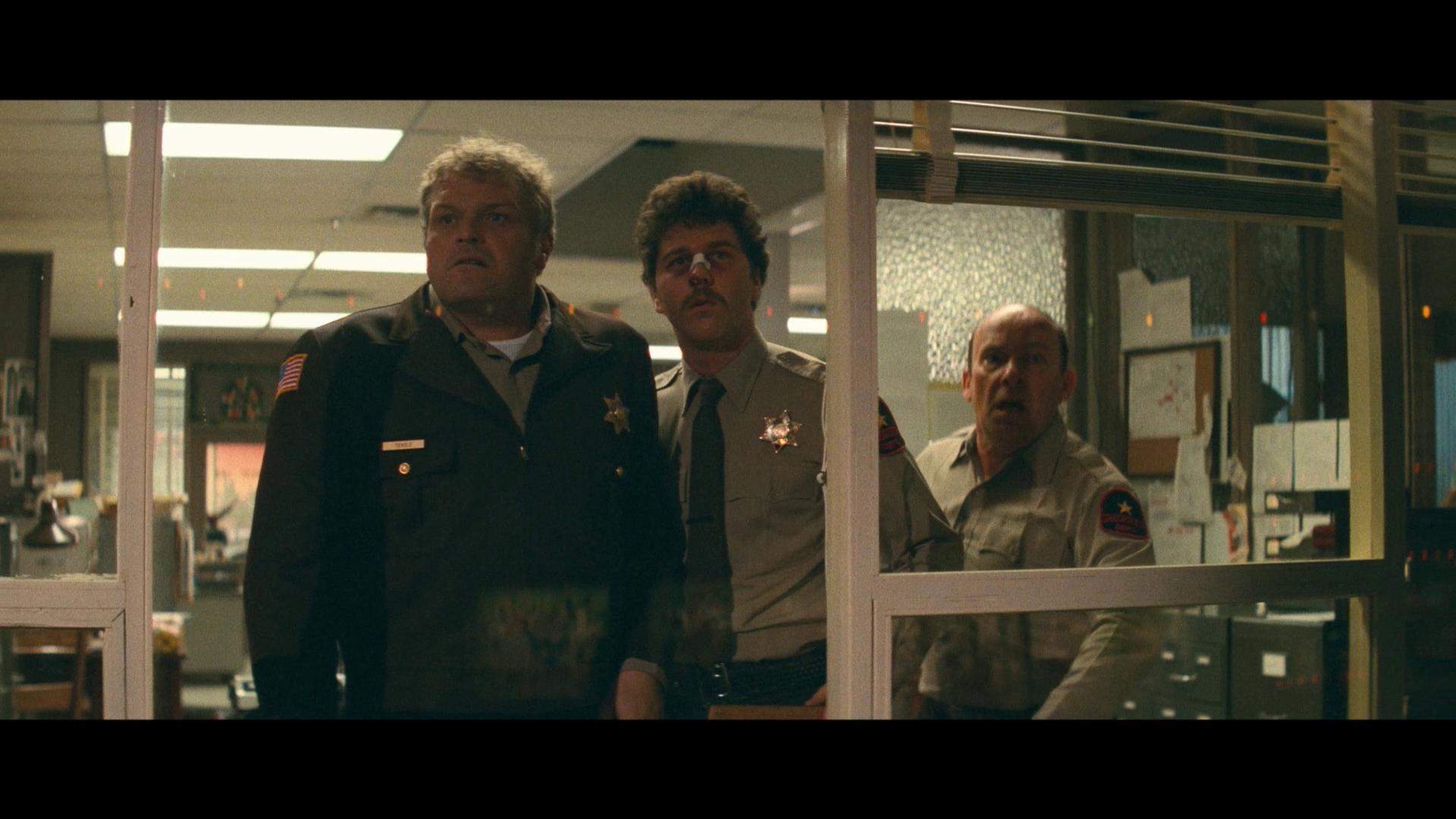