The first generation film school graduates, who led the Hollywood Renaissance of the 1970s, never really understood musicals. Peter Bogdonovich fumbled with his musical At Long Last Love, which was released to scathing reviews and terrible box office returns, and Martin Scorcese dropped the ball hard with his New York, New York. Both had all the potential in the world, with big stars and tons of talent behind them, but neither had the luxurious style or sense of fun that the musicals they attempted to pay respects to had in their hay day. The same case, unfortunately, could be made with Francis Ford Coppola, director of such legends as The Godfather and Apocalypse Now, who was, of all people, tapped to direct Warner Bros. long gestating adaptation of the 40s Broadway hit, Finian’s Rainbow. 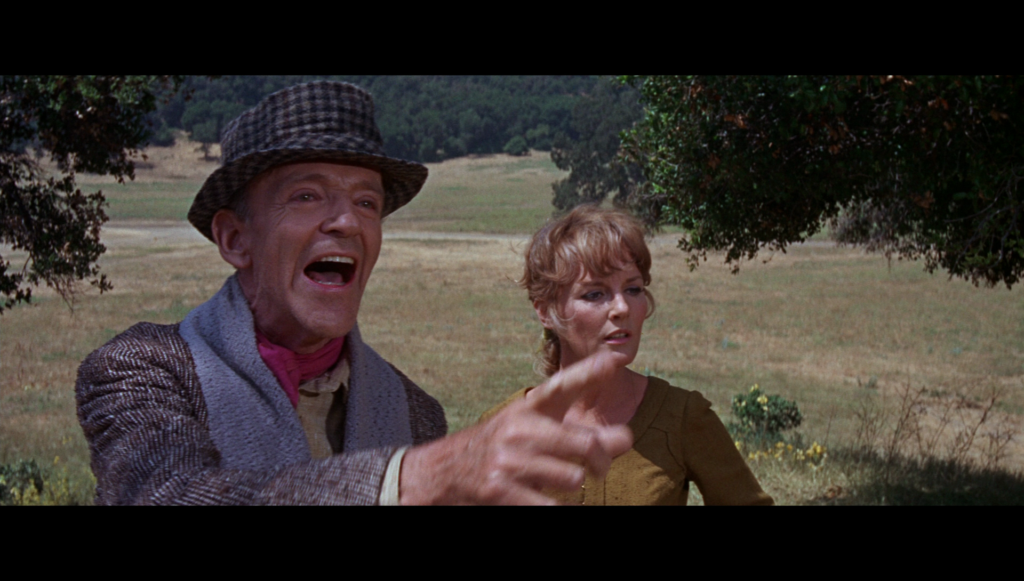 Finian’s Rainbow is the story of Finnian McLonnergan and his daughter Sharon, recent immigrants to the United States in search of the Rainbow Valley of fictitious state Missitucky, but Finnian has a secret: he’s stolen a leprechaun’s gold, and hopes that by burying it somewhere in the valley that it will multiply and make him and his daughter infinitely rich. Their journey brings them to the valley in a time of distress; an evil senator is planning to buyout the last untapped piece of land in the area from its rightful owner by abusing tax laws to mine it for gold. Together the Finnians, while also being hunted by the goofy leprechaun Og who wants his gold back, must join forces with the townspeople to take back the valley, and find love and happiness for all in a grand musical adventure. 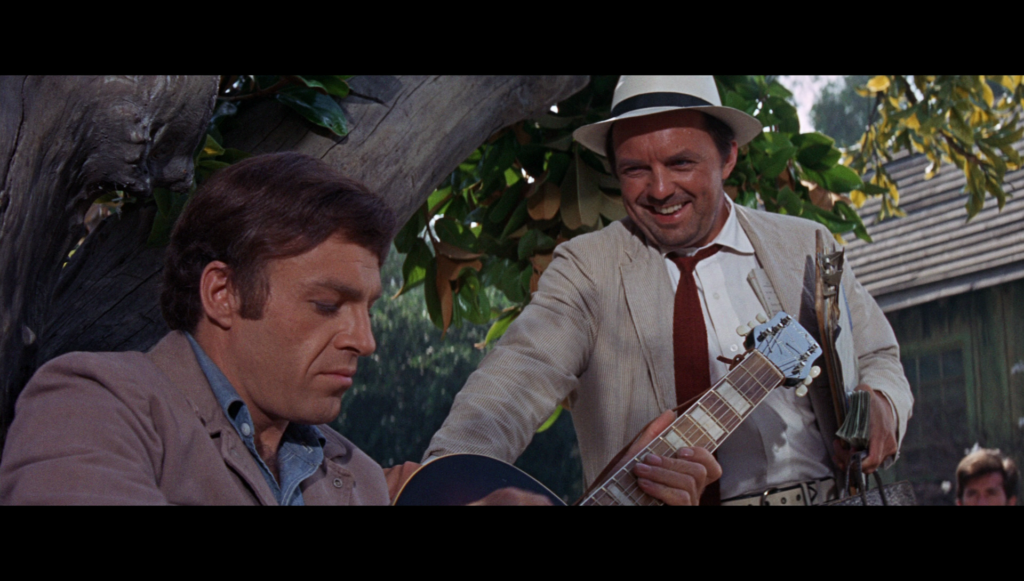 Finian’s Rainbow starts out big, with these huge, sweeping shots of the McLonnergans walking through the vast landscapes of our nation. It promises something big, something with the pomp and circumstance of those early helicopter shots in The Sound of Music. Unfortunately, once our travelers finally arrive in the valley and begin to make their case to the people of the area, Finian’s Rainbow becomes an exercise in convolution, as Coppola and editor Melvin Shapiro juggle far too many eggs, and in the process fail to make an engaging narrative out of the feature. Over 145 minutes, we’re presented with a lot of really interesting ideas, wonderful song and dance numbers, and the promise of a good ol’ fashioned technicolor era inspired musical, but instead we get a couple of disconnected stories, a lot of padding, and a plot beat in particular involving a white man who magically becomes black which has aged really, really poorly. 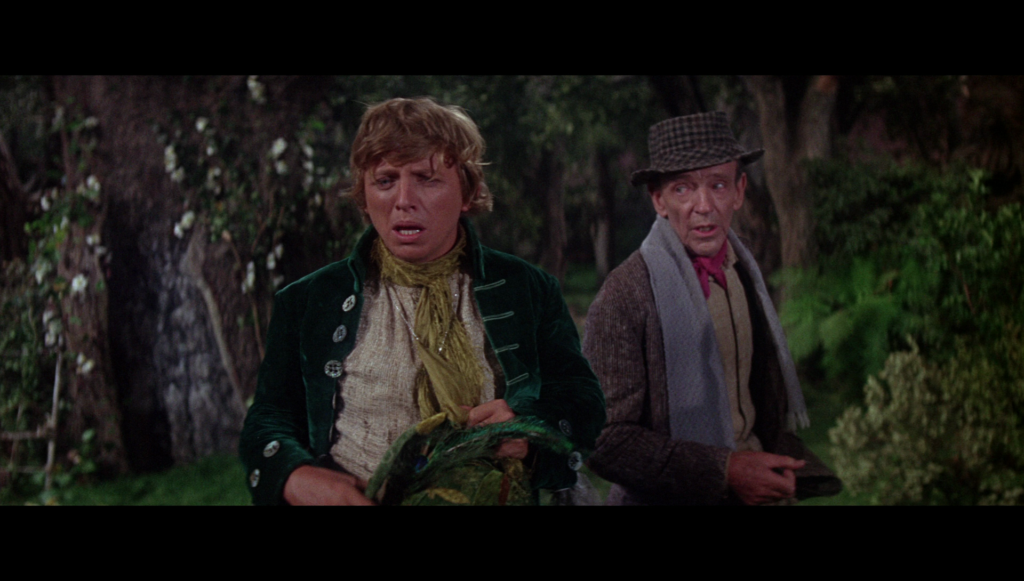 I mean it when I say there are some fascinating ideas on display here; one particularly interesting aspect of the story that never really gets fully explored focuses on the increasingly fragile leprechaun Og, played with cheer and enthusiasm by teen idol Tommy Steele, must deal with the fact that having his pot of gold stolen is turning him human and stripping his people of all of their magical qualities. Instead of making something compelling out of this, he just starts chasing around attractive valley girls, determined to find love instead of salvation. It feels contrived, just like the forced romance between Sharon, played with surprising delight by British musician Petula Clark, and Woody, the defacto leader of the people of the valley played by Don Francks, which just seems to happen after they sing a single song together on screen early on in the film – I’m all for love at first sight, but this one is definitely a stretch, especially as their marriage is used as an incredibly weak catalyst for the film’s finale. There’s also this idea that the pot of gold buried in the valley grants the people three wishes, and somehow they all get used in the least interesting or useful ways possible – one of them gets used to turn the evil white senator black, which cues one of the most groan inducing applications of black face I’ve seen from this era of film making. 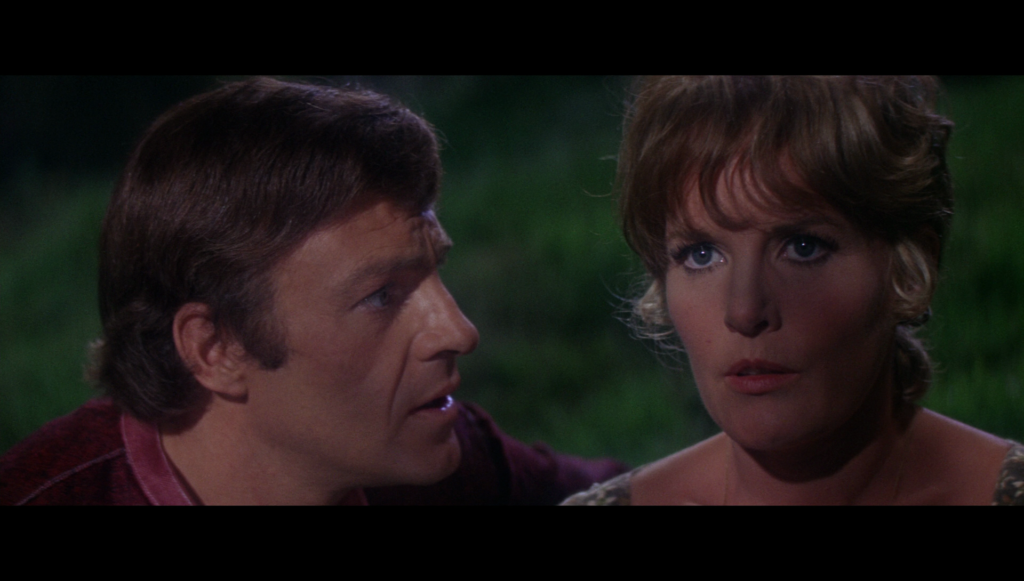 Finian’s Rainbow is at worst a frustrating experience, as you can see how a little more focus might have produced some entertainment value, and at best it serves mainly as a vehicle to show us that even in the late 60s, Fred Astaire still had his chops – this film was his last major feature film musical appearance, and without him and all the historical weight he brings with him to the role of Finian, I’m not sure this movie would still be relevant today. There are some catchy tunes and fine dancing to be found within, but for the most part it’s just another piece of evidence to prove that the Hollywood Renaissance boy’s club simply couldn’t put together decent musicals. Such is life.

Shot on 4-perf 35mm film with Panavision anamorphic lenses, Finian’s Rainbow was released on both standard 35mm and deluxe 70mm film prints during its theatrical release in 1968 with a 2.35:1 aspect ratio. Transferred from a brand new HD master by Warner Archive, this film is presented in 1080p, keeping the original 2.35:1 aspect ratio intact. 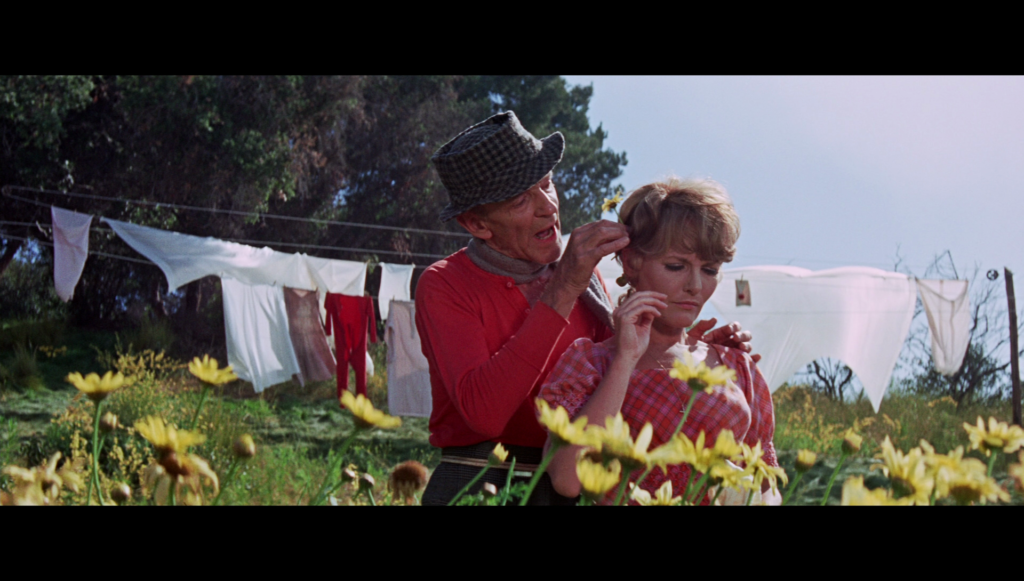 It may not have very long narrative legs, but Finian’s Rainbow sure does shine in this brand new 1080p presentation of the film. It comes out swinging with these beautifully detailed and finely grained wide shots of the various locations the McLonnergan’s traveled to on their quest to find Rainbow Valley, and continues to hold the bar high for the rest of the feature. Colors are healthy, with wonderfully saturated greens and yellows. The image is finely textured, and detail in closeups reveals wonderful skin textures and other details of the film’s excellent production quality. Without a doubt, this 1080p presentation is the pot of gold found at the end of the rainbow for sure. 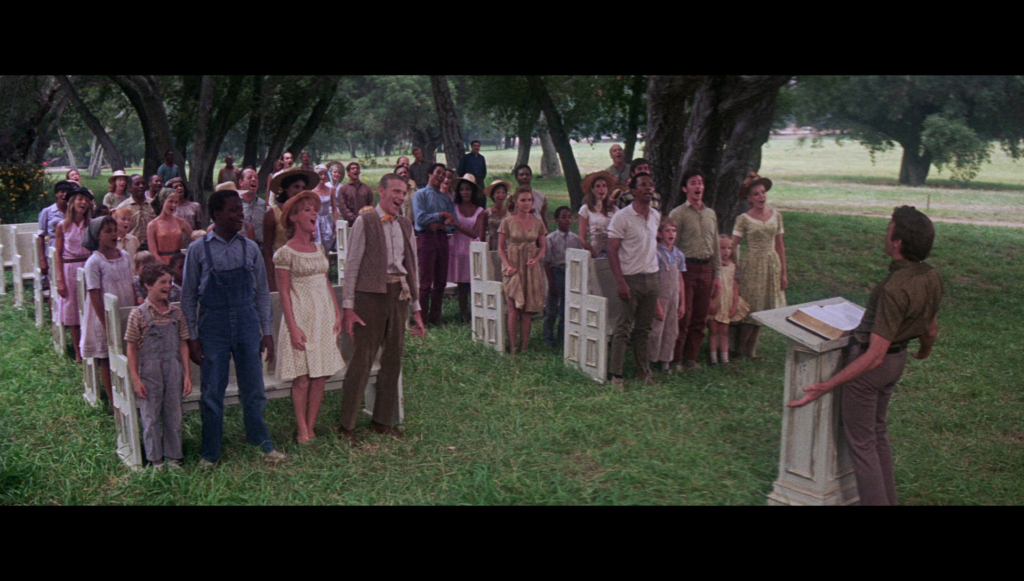 Finian’s Rainbow sound quite good presented in 5.1 surround sound. Dialogue is mostly front and center, but occasionally creeps into the front left and right channels to excellent effect. During the more intense musical numbers, sound swells into the surrounds to help fill the room with the Burton Lane/E.Y. Harbug score appropriately, and sound effects register with excellent clarity. The track features no distracting pops, clicks, or hiss – it isn’t Star Wars, but it certainly gets the job done with style.

Released to home video by the folks at Warner Archive, Finian’s Rainbow is presented in a standard Blu-ray keepcase. The front artwork features Fred Astaire as Finian, dancing at the forefront of a field setting, with Sharon and a woman from the village looking up at him from behind. The title is laid over his torso in bright yellow outlined block lettering. The back artwork features Finian looking into a glowing pot of gold in a green field, next to a review quote, two paragraphs about the film, a list of extras, credits for the release, and technical specs. Fitting packaging for such a release, but nothing grandiose.

Onto the features, of which there are 4:

Watch Finian’s Rainbow with Francis Ford Coppola: DVD Introduction – Coppola talks about the context under which this film was made, and how he felt directing it straight out of film school before digging into the feature film through the included commentary.

The World Premiere of Finian’s Rainbow – what looks to be a 25 minute made for TV production all about the grandiose premiere of the film on Broadway during the 1968. Covers the arrival of the stars, and the actual event itself, in typical Hollywood fashion.

Trailer – the film’s original theatrical trailer, as seen preceding its release in 1968. 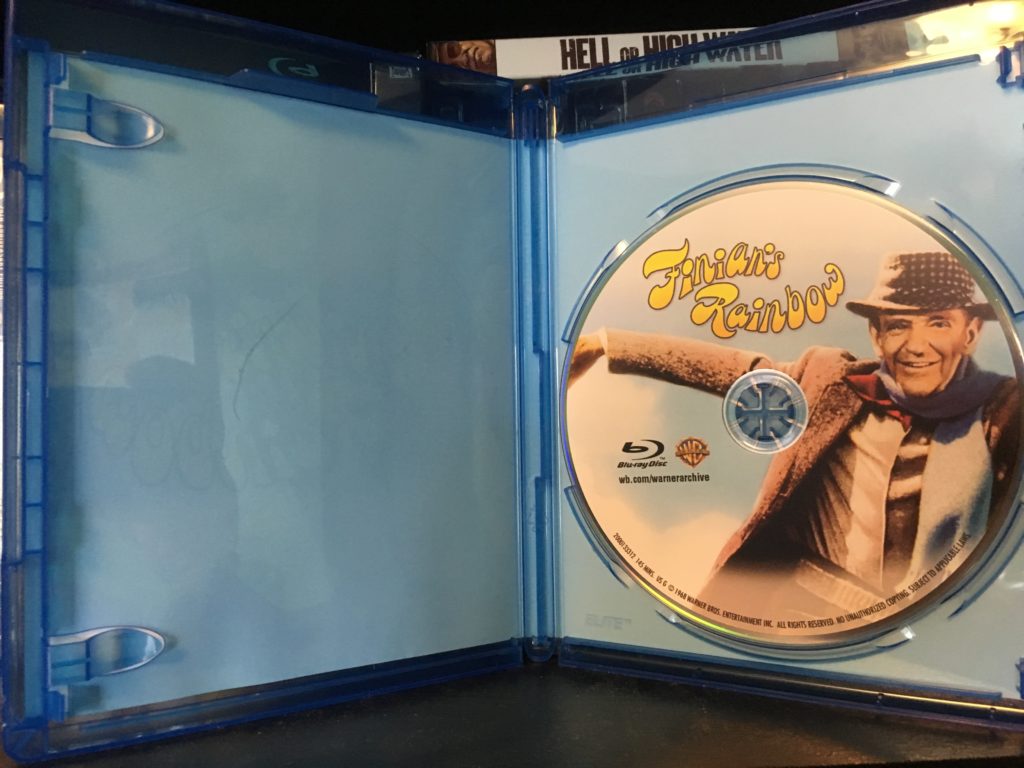 Overall, the packaging is decent, and the collection of extras is surprisingly decent for a Warner Archive release. 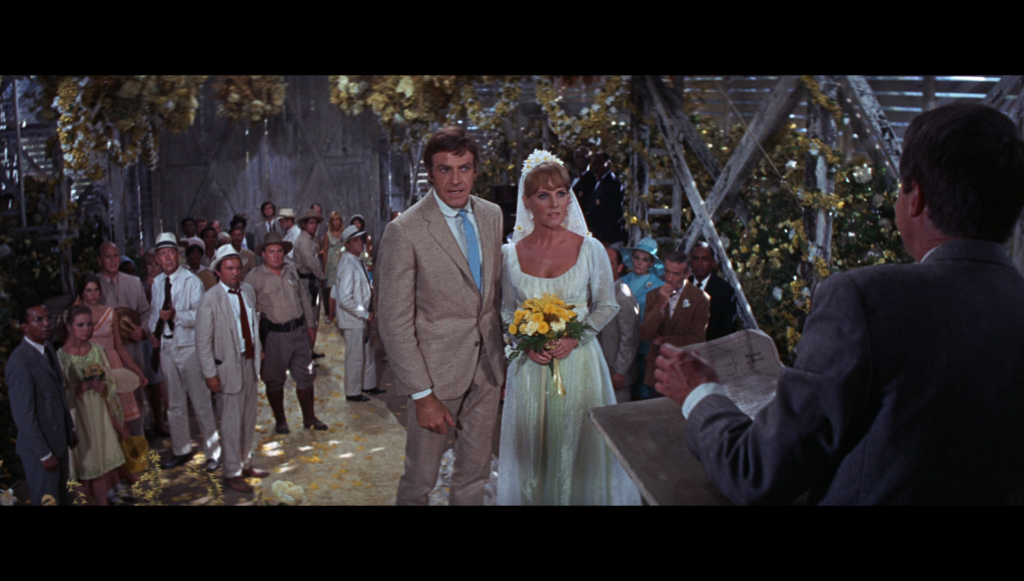 I love musicals; they’re one of my specialties, and I absolutely adore Fred Astaire, who shines as one of the brighter parts of this misguided and incredibly busy musical. That being said, Finian’s Rainbow did muster up 2 Academy Award nominations, made plenty of money at the box office, and my mom sure does like it, so I’m glad Warner Archive has seen it fit to give it the prestige treatment in terms of audio and video. Coupled with some decent packaging, and a solid set of features, this release certainly the film justice, and is sure to please fans of the film looking to see it in all of its HD glory.