Plagued with controversy even when only a novel, Fear and Loathing in Las Vegas has seen its fair share of negative reviews and critic dismissals. Initially published in 1971, author Hunter S. Thompson was recognized for his competent literary technique, but the story itself was considered loose and overly explicit. However, over time, more and more reviewers began to see the book for it truly was; a rather brilliant surrealist commentary on post 1960s America. Like its source material, the film adaptation was met with similar negative critique upon its release in 1998, but has since gained a strong cult following. Fear and Loathing is a dazzlingly eccentric narrative with unique, engaging characters, one-of-a-kind cinematography, and still manages to offer a thoughtful political commentary.

I’ll begin by saying that this film is absolutely polarizing, and I don’t think less of anyone that fails to really enjoy viewing it. I believe one of the most wonderful things about art, and specifically film, is it’s tendency for subjectivity. With its near-constant in-your-face attitude of presentation, numerous explicit drug scenes, and an overall rambunctious tone, it is bound to repel a fair amount of audiences. That being said, it’s these elements of the film that vastly differentiate it from other feature productions, and for me personally I found a great deal of appeal in Fear and Loathing. 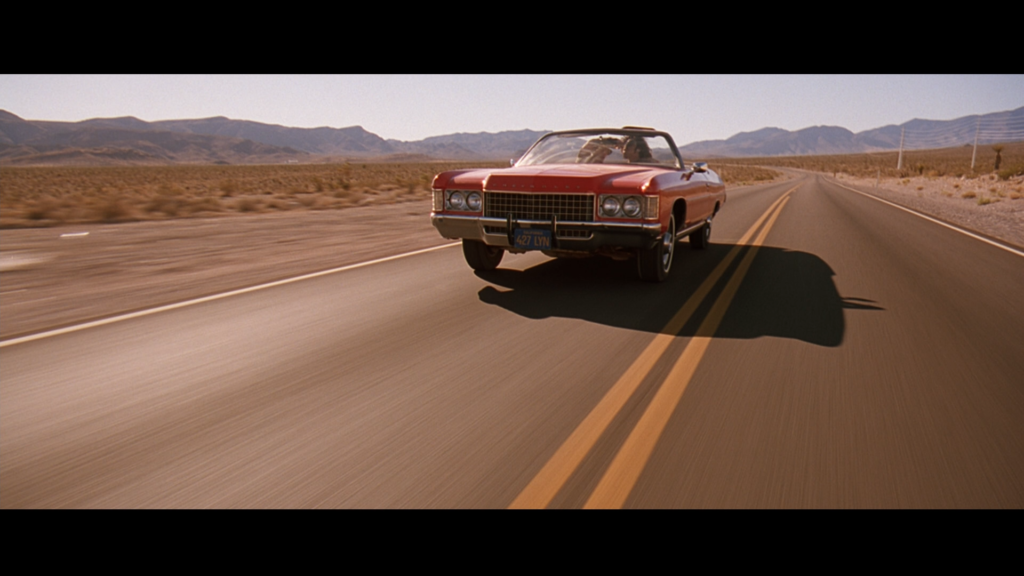 The plot of the film is quite simple; a journalist, Raoul Duke, and his attorney, Dr. Gonzo, set off to Las Vegas to cover a motorcycle race, and use the trip as an opportunity to experiment with a diverse array of recreational drugs. The film quickly orients itself away from the race Duke is to cover, and mainly focuses on the experiences of the two men in Vegas, and the ridiculous situations their drug-induced antics land them in. Their irresponsible exploits are done in the name of “the American Dream,” though that fantasy soon becomes more of a delusion.

Duke and Gonzo are some of the most horrendous yet lovable characters to possible ever grace the cinema screen. Duke is constantly narrating the events of the film, and provides a personal touch to the chaotic events taking place. With quotes such as “Ignore this terrible drug. Pretend it’s not happening. HI THERE. Uhhh, my name… uh… RAOUL DUKE. On the list,” we get a glimpse into the character’s deceptively collected thoughts, and then immediately we get his unfortunately struggled attempts to interact with a hotel clerk with a head full of LSD. His insightful, recalling narrative gives the film a constant element of charm, and that is beautifully juxtaposed with his partner, Gonzo, who clearly has much more of a brutish and irresponsible attitude towards the matters at hand. He consistently mutters his words, seemingly in control as he takes Duke on feverish nights out on the town that typically result in drug-induced paranoia and terror. The chemistry between actors Johnny Depp and Benicio del Toro is a joy to listen to and watch. 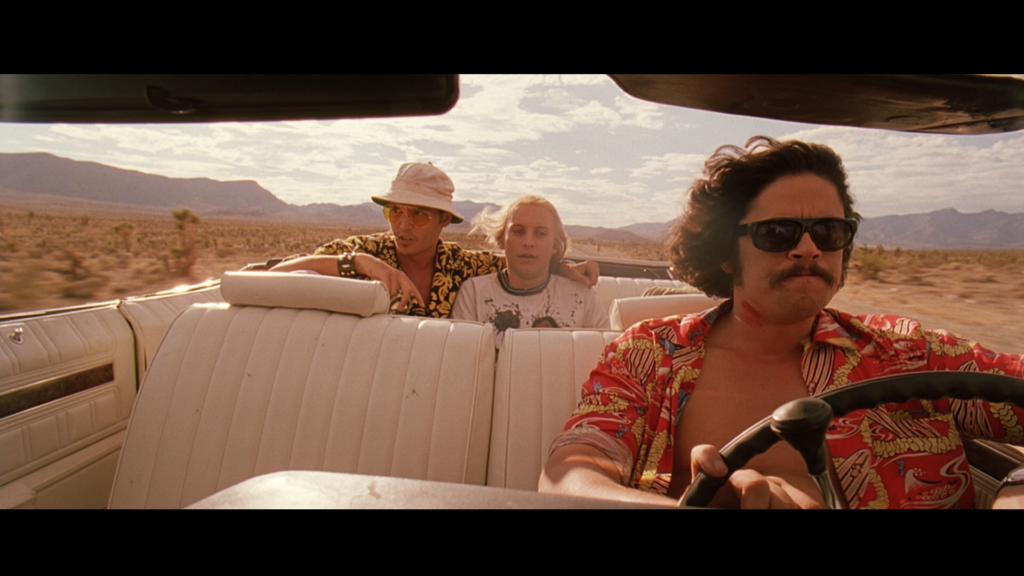 Certainly one of the most notable aspects of Fear and Loathing is its unique style of cinematography that brilliantly synergizes with the drug themes present in the film. With countless jarring camera angles, unusually intimate close-ups, and a color palette that compliments the vivid neon lights of Las Vegas, there is definitely a suggestion of putting the viewer on their own little drug trip while watching the film.

Fear and Loathing is undeniably more of an experience (and a wild one at that) than a film to just watch. It entertains, violates, depresses, and confuses the viewer in a multitude of ways, and simply should not be seen through the lens we may be used to using when watching films. I tried to avoid getting too deep into an analysis of the political themes present in this film, but I’d recommend for those interested to do some research on the film’s opinions regarding the destruction of “the American Dream.” There’s some very interesting stuff out there!

The Criterion release of Fear and Loathing features a mostly crisp picture and fine detail. Close-ups, of which there are many, reveal plenty of sharp facial features without much, if at all, lack of focus. Although much of the film takes place within Vegas buildings and the Strip in general, the desert scenes are actually quite beautiful, and this transfer emphasizes the brilliant tans, yellows, and sun-scorched landscapes of Nevada. The neon lights of Vegas are appropriately vivid, with suitable saturation, and this gives the city scenes quite a dazzling tone that matches the accents of the film. I would say that nothing seemed overdone, and despite the flashy nature of many scenes in the film, there is an overall sense of balance when it comes to color palette, and for me it was genuinely satisfying to view. 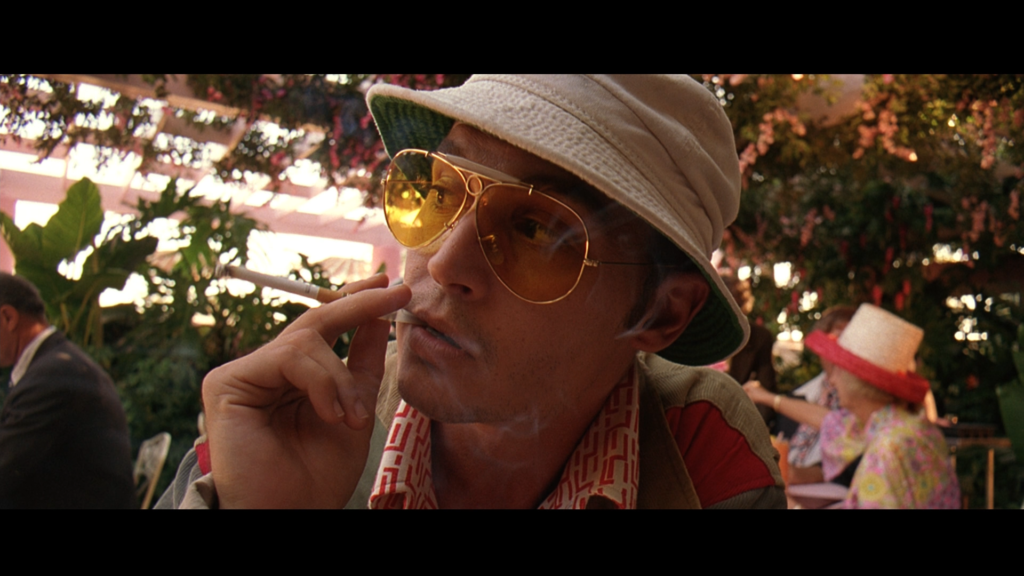 As you can see, the Criterion release has a slightly warmer color temperature to it, and overall more natural tone. Sharpness and clarity is similar between them, but I would say Criterion’s transfer has a slight edge over Universal’s. 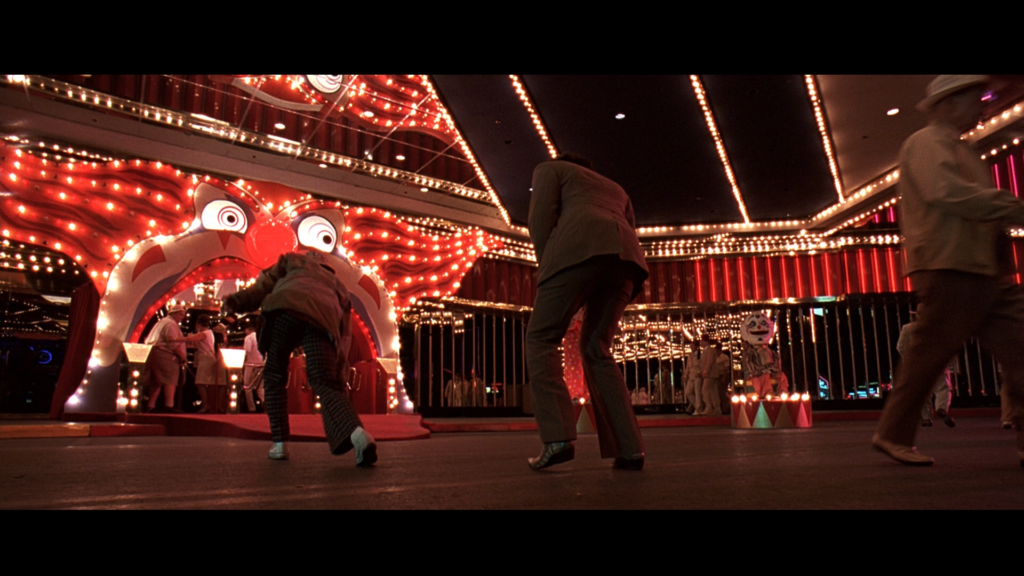 The Criterion release also shows a bit more color-pop in some of the flashier Vegas strip scenes. By no means is Universal’s transfer “bad,” but for those looking for the best possible release available in terms of video quality for this film, Criterion is the winner. Shout-out to our Head Editor Jeff Rauseo for the Universal release screencaps!

Many of the what I consider “reference-quality” movies, in terms of their audio presentation, have come out in the past decade or so, and I believe that just says something about our constantly improving recording and mastering techniques and technology. Being released in 1998, this film lacks that extra auditory zest, but for all intents and purposes, it is of excellent quality. There are actually two audio tracks in the Criterion release; DTS-HD Master Audio 2.0 and 5.1, and while both provide terrific dynamics and clear sound, I feel the 2.0 track has a slightly better mix, specifically when listening to Johnny Depp’s narrations. There is plenty of dialogue present in this film, and it all sounds clear and balanced. The Vegas atmospheric noises are also well-mixed into the audio track, and overall there is little to gripe about with Fear and Loathing’s audio. 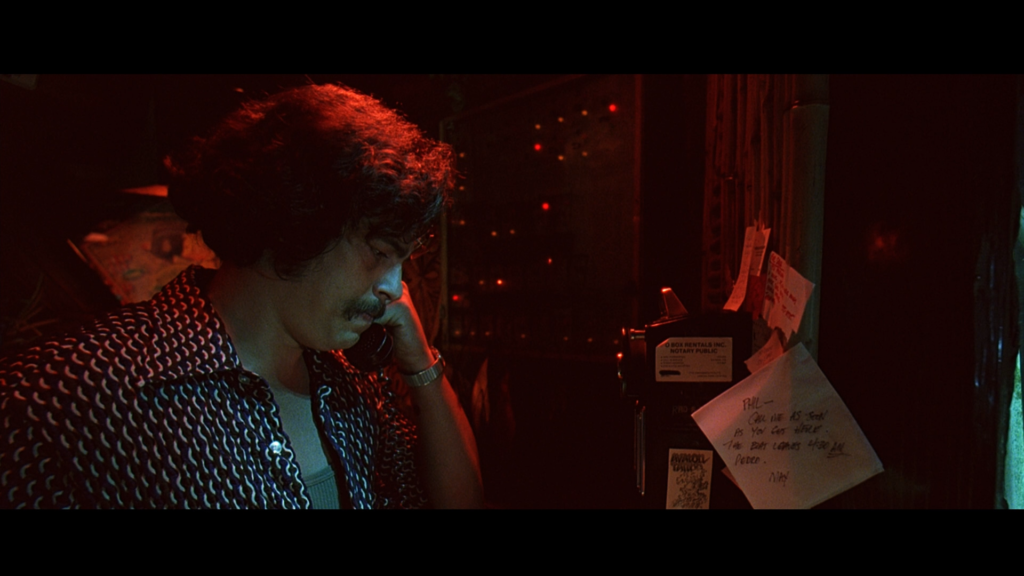 I’m relatively new to Criterion release collecting, having only two in my collection, but I’m always impressed by their choices in packaging. The cover features a wonderful piece of art by Ralph Steadman depicting Duke and Gonzo on their ride to Las Vegas, with the infamous hallucinatory bats gracing the sky. The back of the case includes a plethora of information regarding the release; always a welcome feature by Criterion. Contained within we have a nicely printed booklet that includes some interesting written extras in the form of A Pint of Raw Ether and Three Reels of Film by J. Hoberman (an analysis of the film), Jacket Copy for Fear & Loathing in Las Vegas: A Savage Journey to the Heart of the American Dream by Hunter S. Thompson (a writing by Thompson detailing his inspiration for the novel), Instructions for Reading Gonzo Journalism by Hunter S. Thompson (a brief note on how to “experience” the form of journalism he invented), and a note by Criterion detailing the work done to obtain the transfer used for the Blu-ray. 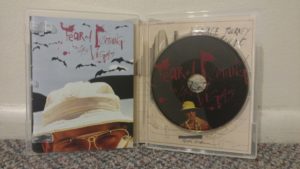 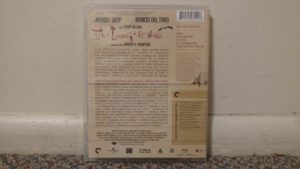 Diving into the special features of this release, we understand Criterion’s relatively steep asking price for the product. There is an absolute abundance of extras to explore including:

-seven selected storyboards sequences of scenes from the film

-a selection of production design illustrations

-a selection of production photos

–Hunter Goes to Hollywood: a short documentary about a visit by Thompson to the set of the film

–Not the Screenplay: an audio-only featurette about conversations between the director, screenwriter, and producer of the film

–A Dress Pattern: short film by Gilliam as the conversations, or rather arguments, mentioned above continued

-eight various trailers and TV spots for the film

–Fear and Loathing on the Road to Hollywood: full-length documentary created by the BBC about Thompson, Steadman, and their work and inspirations for the film

-three separate commentaries for the film: one with Gilliam, one with Depp, del Toro, and producer Laila Nabulsi, and one with Thompson and Anita Baymont, his assistant.

There is plenty of information to delve into here, and fans of the film will definitely be satisfied with the amount of behind-the-scenes features and extras. 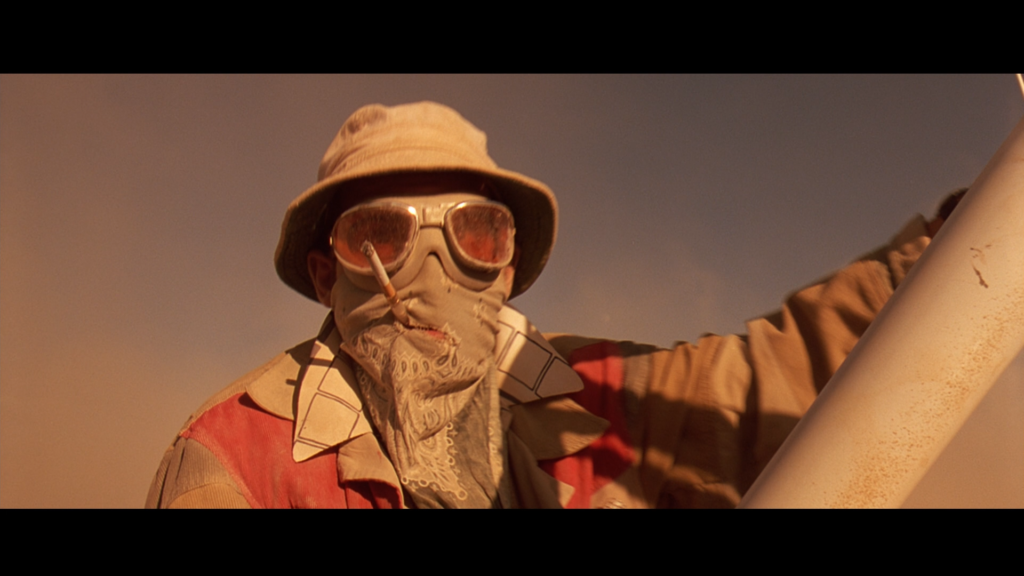 With the amount of special features and the obvious amount of effort put into this release, it is without a doubt deserving of a perfect score in terms of a home release. Aside from the already-culturally relevant nature of the film, and it’s delightful personality and enjoyable bizarre tone, there’s just so much packed into this release that it’s honestly worth having as just an artistic piece in your collection, even if you don’t necessarily prefer the film.