The Fate of the Furious (alternatively known as F8 and Fast & Furious 8) is a 2017 American action film that was directed by F. Gary Gray and written by Chris Morgan. A sequel to 2015’s Furious 7, it is the eighth installment in the Fast & Furious film franchise and stars Vin Diesel, Dwayne Johnson, Jason Statham, Michelle Rodriguez, Tyrese Gibson, Chris “Ludacris” Bridges, Scott Eastwood, Nathalie Emmanuel, Elsa Pataky, Kurt Russell, and Charlize Theron. The Fate of the Furious follows Dominic Toretto, who has settled down with his wife Letty Ortiz, until cyberterrorist Cipher coerces him into working for her and turns him against the team, forcing them to find Dom and take down Cipher.

Plans for an eighth installment were first announced in March 2015 when Diesel appeared on Jimmy Kimmel Live! and announced that the film would be set in New York City. Preparations for the film began immediately after the release of Furious 7, with Diesel, Morgan, and producer Neal H. Moritz re-signing. After setting an initial release date in the same month, casting took place between April and June 2015. In October 2015, Gray was announced to direct the film in the place of James Wan, who had directed the previous installment. Principal photography began in March 2016 in locations such as Myvatn, Havana, Atlanta, Cleveland, and New York City, continuing the franchise’s tradition of filming in exotic locations around the world.

The Fate of the Furious premiered in Berlin on April 4, 2017 and was theatrically released in conventional and IMAX theaters across the United States on April 14, 2017 while also playing in 3D, IMAX 3D, and 4DX internationally. The film received generally positive reviews from critics, many of whom praised the performances and action sequences, but criticized the storyline and the long running time. The film grossed over $1.2 billion worldwide, making it the thirtieth film (and the second in the franchise, after Furious 7) to gross over $1 billion, the third-highest-grossing film of 2017, and the eleventh highest-grossing film of all time. It also grossed $541.9 million worldwide during its opening weekend, which made it the highest-grossing worldwide opening of all time until the release of Avengers: Infinity War the following year.

The Fate of the Furious takes an all to familiar series of events, and capitalizes on the edge of your seat gripping action and somehow still manages to present it in an entertaining way. There’s fast cars, there’s fast action, and we see the next step in the life of the “family” that Toretto has created over the years. While there isn’t anything that really stands out with this movie, it’s still something that I found to be fun and entertaining and certainly should be viewed by anyone and everyone that’s had any kind of interest in the franchise.

Reportedly being finished with a 2K Digital Intermediate, the UHD release of The Fate and the Furious offers a pretty solid HDR enhanced image that only slightly boosts the color palette. While I say “only slightly”, I believe that we just ran into a scenario with this movie that made it difficult for the technology at hand to really make a significant change of experience. That doesn’t stray away from the fact that everything in the movie is still presented cleanly, and the characters and events that do unfold are able to be seen and understood without any problems whatsoever.

The 4K UHD release of The Fate of the Furious comes packaged with an English DTS:X Master Audio soundtrack that boasts an incredibly well done and full-bodied experience for anyone running a home audio setup. The clarity and range of the dialogue are top notch and offers an extremely a viewing that will be unlike any other. Dialogue is spoken cleanly and the characters are able to be heard and understood without any problems.

The 4K UHD release of The Fate of the Furious comes packaged in the standard two-disc amaray case.  In that case is the standard 4K UHD copy of the movie, the standard Blu-ray copy as well as a digital copy redemption pamphlet.  There is a slipcover that was made available during the first pressing of the release that features the same artwork that’s made available on the case. 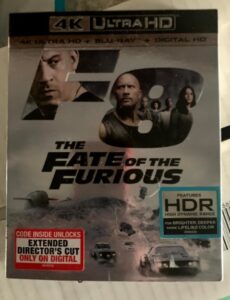 The 4K UHD release of The Fate of the Furious unfortunately does not come with any kind of special features on the 4K disc. All supplemental content is made available on the included Blu-ray release of the film. Included with this release is:

Despite the continuing theme of the films within the saga, The Fate of the Furious gives us the proverbial “What’s Next?” after the death of Paul Walker. The story is a little repetitive but it wasn’t awful. The video and audio presentation of the 4K UHD release was really well done, and overall this release made for an enjoyable time. If you’re looking to add this to your collection, I’d definitely recommend picking it up. The Fate of the Furious is available on 4K UHD today.