Fast & Furious 6 (stylized onscreen as Furious 6) is a 2013 Action film that was directed by Justin Lin and written by Chris Morgan. A sequel to 2011’s Fast Five, it is the sixth installment in the Fast & Furious franchise and stars Vin Diesel, Paul Walker, Dwayne Johnson, Michelle Rodriguez, Jordana Brewster, Tyrese Gibson, Chris “Ludacris” Bridges, Sung Kang, Luke Evans, Gina Carano, and John Ortiz. Fast & Furious 6 follows a professional criminal gang that is led by Dominic Toretto, who are offered amnesty for their crimes by the U.S. Diplomatic Security Service agent Luke Hobbs, in exchange for helping him take down a skilled mercenary organization that is being led by Owen Shaw, one member of which is Toretto’s former lover Letty Ortiz.

After departing from the street racing theme of the previous films in Fast Five to great commercial and critical success, developers approached Fast & Furious 6 with the aim to transform the franchise further, incorporating elements of spy and adventure film, in the hopes of increasing the audience members further.

Pre-production began in April 2011, and principal photography began in London in July 2012, and featured several international filming locations, including the Canary Islands, Glasgow, and Los Angeles.

Fast & Furious 6 first opened in the United Kingdom on May 17, 2013, and was released internationally on May 24, 2013. It achieved financial success, setting box office records as the sixth-highest-grossing film released in 2013, the second-highest-grossing film in Universal Studios history, and it surpassed Fast Five to become the highest-grossing film in the franchise. It grossed $788.7 million worldwide and received mostly positive reviews from critics, with praise for the performances of the cast, the action sequences, and Lin’s direction, but also received criticism for its running time and screenplay. A sequel, Furious 7, was released in April 2015.

Fast & Furious 6 is a film that, while it’s completely re-imagined the world and universe we once had that centered around illegal street racing, we’re starting to see more of the “family” approach in the relationships between the characters. The story does a solid job at building up from where the previous one had left off, the emotion from the cast is there, and all-in-all, makes this movie one that I will personally continue to enjoy with every re-watch.

While it was reported that Fast & Furious 6 was shot on film, the movie was ultimately finished at 2K, therefore making this release an upscale from that 2K source. While there really aren’t any moments that stand out more than others throughout the movie, everything looked considerably clean and easily understandable without the need to have my glasses on. My wife and I were easily able to see and understand everything as it happened.

I find it rather weird that the Extended Cut of Fast & Furious 6 only contained a DTS 5.1 mix; while leaving the Theatrical version with a DTS:X mix. Was it an investment thing and the folks that worked on this release not want to put in the additional work to re-master the audio of the extended version? Regardless of the discrepancy there, even at the DTS 5.1 track, we were able to hear and understand everything; after we bumped the volume up on the receiver a little bit to compensate for the lack of “oomph” in the underlying track. The dialogue was spoken cleanly, and characters were able to be heard.

The 4K UHD release of Fast & Furious 6 comes packaged in the standard two-disc amaray case.  In that case is the standard 4K UHD copy of the movie, the standard Blu-ray copy as well as a digital copy redemption pamphlet.  There is a slipcover that was made available during the first pressing of the release that features the same artwork that’s made available on the case.  My copy unfortunately did not come with a slipcover. 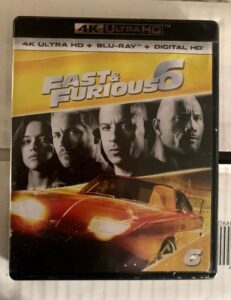 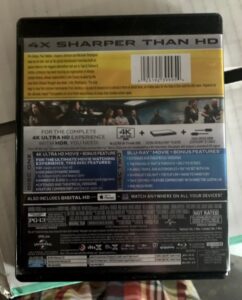 There’s a number of supplemental materials that are included on the UHD release of Fast & Furious 6.  The material that’s included is made available on the included Blu-ray disc.  Included with this release is:

Overall, Fast & Furious 6 on 4K UHD was necessary to complete my desire to upgrade my Blu-ray copies. Unfortunately, I don’t think that this particular UHD release provides more over its previously released Blu-ray counter part; but I honestly couldn’t complain about this release much either. I would’ve preferred that the Extended Cut include the DTS:X audio too for more immersion; but, I digress. Overall, this release is solid and gives viewers a stunning presentation. If you already don’t have this on Blu-ray, then definitely grab the UHD release. Otherwise, keep your Blu-ray copy.