Fast & Furious (alternatively known as Fast & Furious 4) is a 2009 action film that was directed by Justin Lin and written by Chris Morgan. It is the fourth installment in the Fast & Furious film franchise, and is a direct sequel to The Fast and the Furious, and stars Vin Diesel, Paul Walker, Michelle Rodriguez, Jordana Brewster, and John Ortiz. Fast & Furious follows Federal Bureau of Investigation (FBI) agent Brian O’Conner and Dominic Toretto who are forced to work together to avenge the murder of Toretto’s lover Letty Ortiz and apprehend the drug lord Arturo Braga.

Fast & Furious marked the first film in the series since the original installment, The Fast and the Furious, to feature the main cast. As a result, this has spawned a shift within the series’ chronological order, with developers setting Fast & Furious between the second and third installments, to account for their absences. Casting began in July 2007, after Universal Studios confirmed the returns of Walker and Diesel, while principal photography began in Los Angeles in February 2008, with the film being shot in California.

Fast & Furious was released in the United States on April 3, 2009. The film set a number of box office records for its opening-weekend gross. It quickly became the highest-grossing film in the franchise and eventually went on to gross over $363 million worldwide. The film was also the 17th-highest-grossing film of 2009.

Despite its commercial success, Fast & Furious received negative reviews, with some critics singling out the performances of Diesel and Walker and the film’s soundtrack for praise, while criticizing the screenplay and dialogue. A sequel, Fast Five, was released in April 2011 to box office success, surpassing Fast & Furious as the highest-grossing film in the franchise.

Ultimately being my least favorite film of the franchise, Fast & Furious packs a significant amount of action; but ends up lacking in the emotional bond that the characters have built later on in the series. The story was decent enough to re-establish that foundation that was lost when Diesel and Walker opted to not be in the other earlier films respectively, but that lack of emotion and dedication to their characters and the story arc really pulls out a lot of the experience we want with movies.

With this release, we have another absolutely stunning visual presentation. The 4K UHD release of Fast & Furious boasts robust textures, and a lighting palette that just felt right as I watched along. Keeping that clear picture really gives viewers an accurate presentation of the stunts that are carried out, allowing for them to feel as real as you could really imagine. HDR does run with a high contract, and gives the characters flesh tones somewhat of a warmer appearance. The details of the cars absolutely shine in this release, making the racing sequences the absolute best part of this release.

Bundled with an insane DTS:X audio track, the UHD release of Fast & Furious gives its viewers a completely immersive audio experience, assuming they’re set up to make use of the technology within. Packing a punch right from the beginning truck chase scene, the audio track instantly grabs the attention of the audience and pulls them right in. The action sequences are without a doubt the best part of this audio track, and the movement from channel to channel is effortless and does a phenomenal job at putting you right into the middle of everything. The dialogue is spoken cleanly, and all of the characters were able to be heard and understood without issue.

The 4K UHD release of Fast & Furious comes packaged in the standard two-disc amaray case.  In that case is the standard 4K UHD copy of the movie, the standard Blu-ray copy as well as a digital copy redemption pamphlet.  There is a slipcover that was made available during the first pressing of the release that features the same artwork that’s made available on the case. 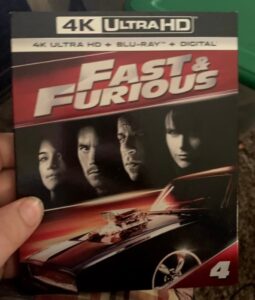 There’s a number of additional features that’s been included with the UHD release of Fast & Furious. Included with this release is:

Finally bringing things back together after the events of Tokyo Drift, Fast & Furious gives audiences what they’ve been asking for and brought the main characters back together, even though there is an issue with their levels of commitment to the characters at this point. The overall presentation is phenomenal and really makes this release a staple to anyone’s UHD collection, and really should be used at every opportunity to showcase the benefits of having a 4K setup. If you’re looking to add this to your collection, I would definitely recommend grabbing it! Fast & Furious is available on 4K UHD today.