Everest is a 2015 British-American biographical adventure film that was directed and co-produced by Baltasar Kormakur, Tim Bevan, Eric Fellner, Nicky Kentish Barnes, Tyler Thompson, and Brian Over. The film was written by William Nicholson and Simon Beauty, and adapted from the memoir by Beck Weathers titled Left For Dead: My Journey Home From Everest. Featuring an ensemble cast that include Jason Clarke, Josh Brolin, John Hawkes, Robin Wright, Michael Kelly, Sam Worthington, Keira Knightley, Emily Watson, and Jake Gyllenhaal and is based on the real events of the 1996 Mount Everest disaster and focuses primarily on the survival attempts of two expedition groups.

Opening at the 72nd Venice International Film Festival on September 2, 2015, Everest made its theatrical debut on September 18, 2015 in limited theaters in the US, it ultimately began a wide release in the United States on September 25, 2015. The film was considered to be a commercial blockbuster as it ended up grossing $203 million worldwide against its $55 million operating budget.

Internationally, the film was released in a total of 65 countries and quickly became the eighth Universal Pictures film of 205 to cross the £10 million mark in the UK. The only other studios to achieve this feat are 20th Century Fox in 2014 and Paramount Pictures in 2011. Author Jon Krakauer of Into Thin Air has denounced the movie, stating that some of its details were fabricated and defamatory. He also expressed regret regarding Sony’s rapid acquisition of the rights to the book; with Director Baltasar Kormakur responding and claiming that Krakauer’s first person account was not used as source material for the film and alleging that Krakauer’s version conflicted with the actual events. 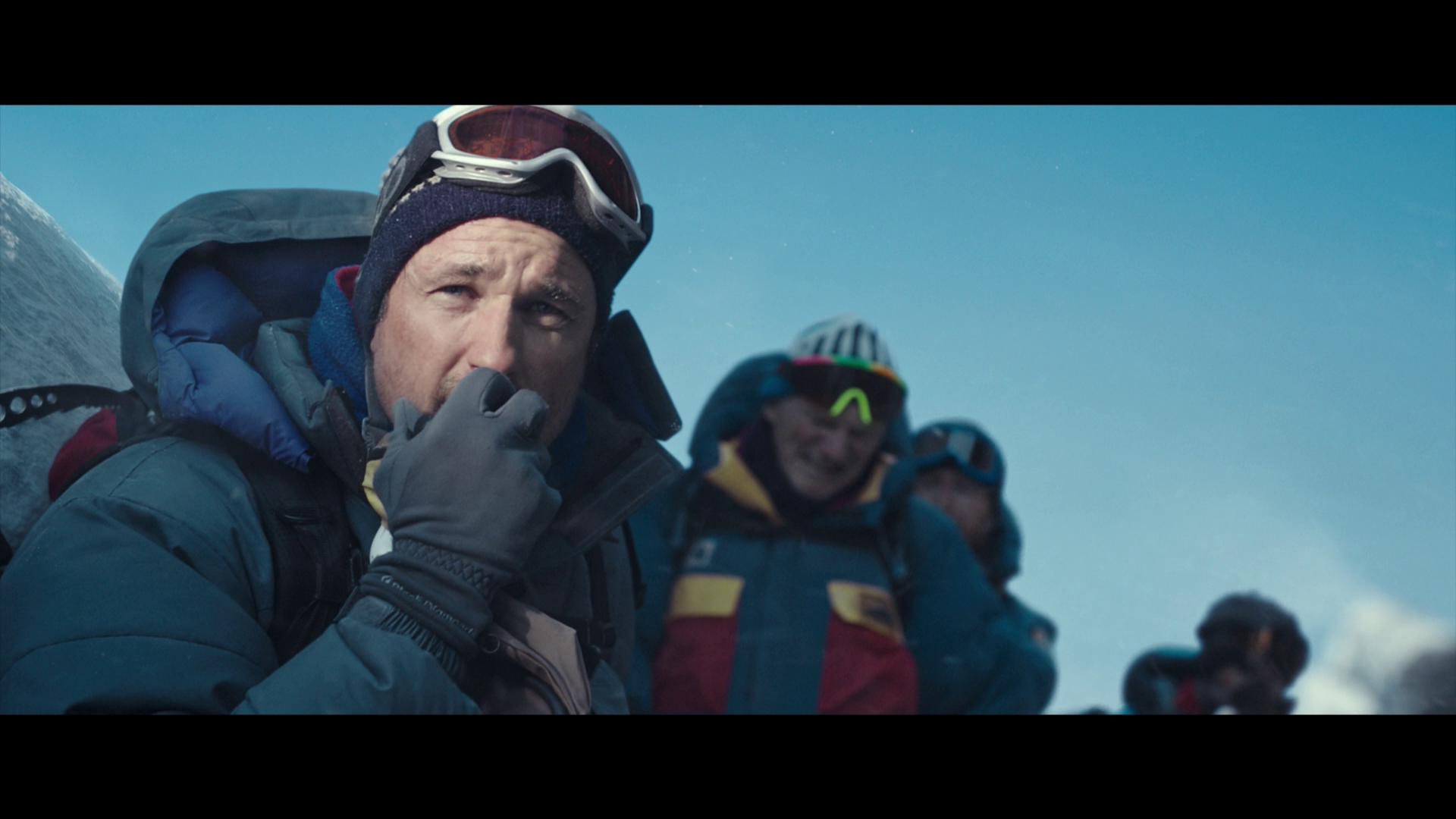 Everest was a film that I was pretty excited to check out, especially after grabbing during this most recent UHD sale that Best Buy had as they offered it for $15.  Whether or not the details of this story line are fabricated as claimed by Jon Krakauer, the story that we were given was executed considerably well.  There was one piece of information that was stated by one of the characters in the story that I still found to be unbelievable, mostly because of how insane the number was.  During a brief spiff between two of the climbers, one noted that he had paid $65,000 for this adventure, and all I could do was think to myself about how crazy they would have to be to spend that much money considering the amount of risk they were putting themselves in.  Other than that, the film does a fantastic job at portraying the significant danger that climbers put themselves in as they attempt to reach the summit, along with the overall amount of physical and mental exhaustion this will put climbers through, and causes arguments between team mates as people say things that they really don’t mean. 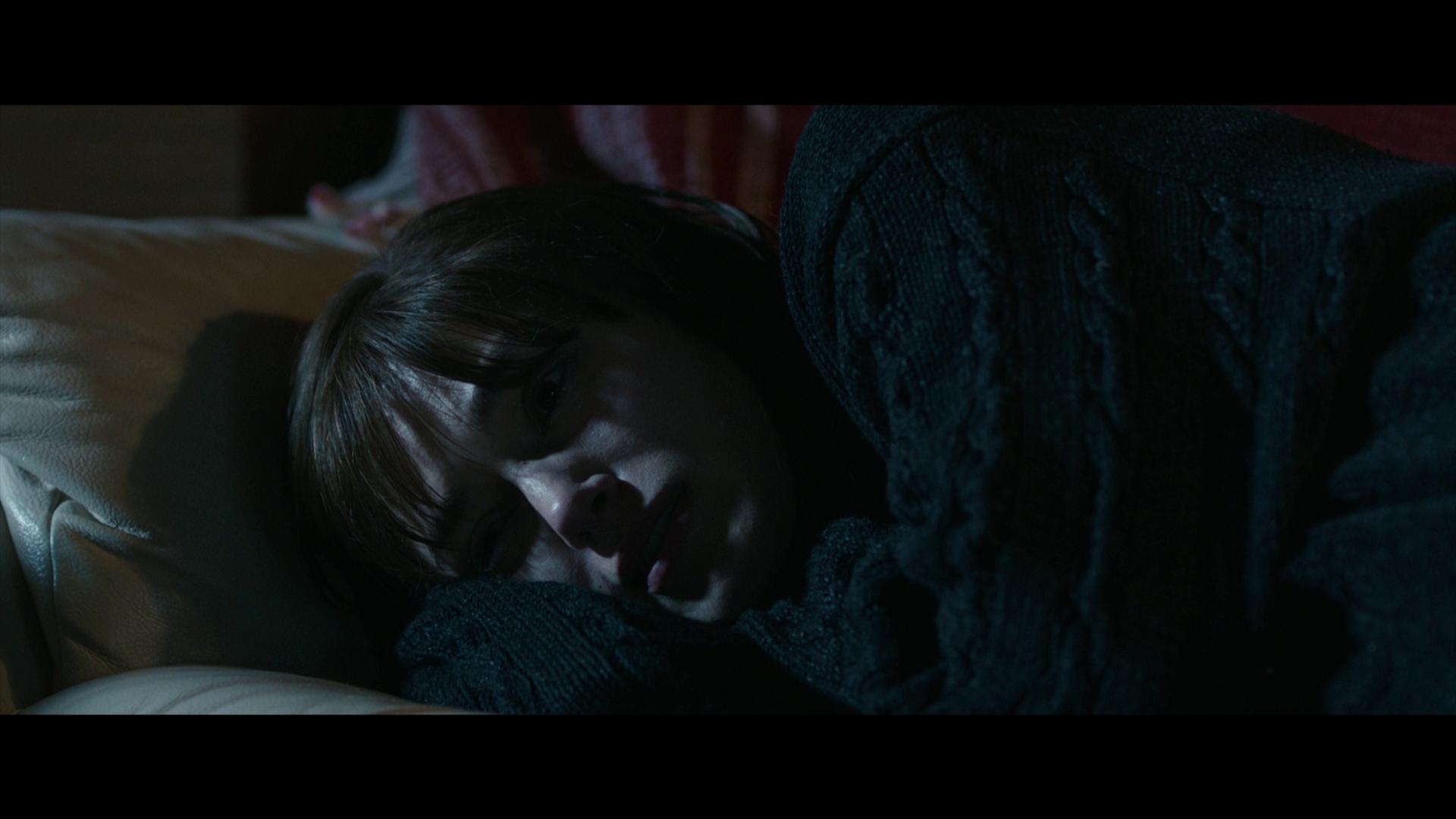 I was kind of let down with the overall visual presentation that Everest offered on 4K UHD.  This release was one that I thought would look absolutely fantastic, however there was an noticeable issue with the darker colors throughout the film.  Sure, the mountain looked astonishingly real, and there were a few moments where I looked at my wife and hinted a couple of “Fuck That!” comments to her.  The overall use of HDR with this film didn’t really add too much to the overall experience.  Maybe it was because Everest was an early release in the 4K UHD game and studios were starting to get their hands wrapped around working with the format, I’m not too entirely sure.  But, I’m glad that I only paid $15 for this release. 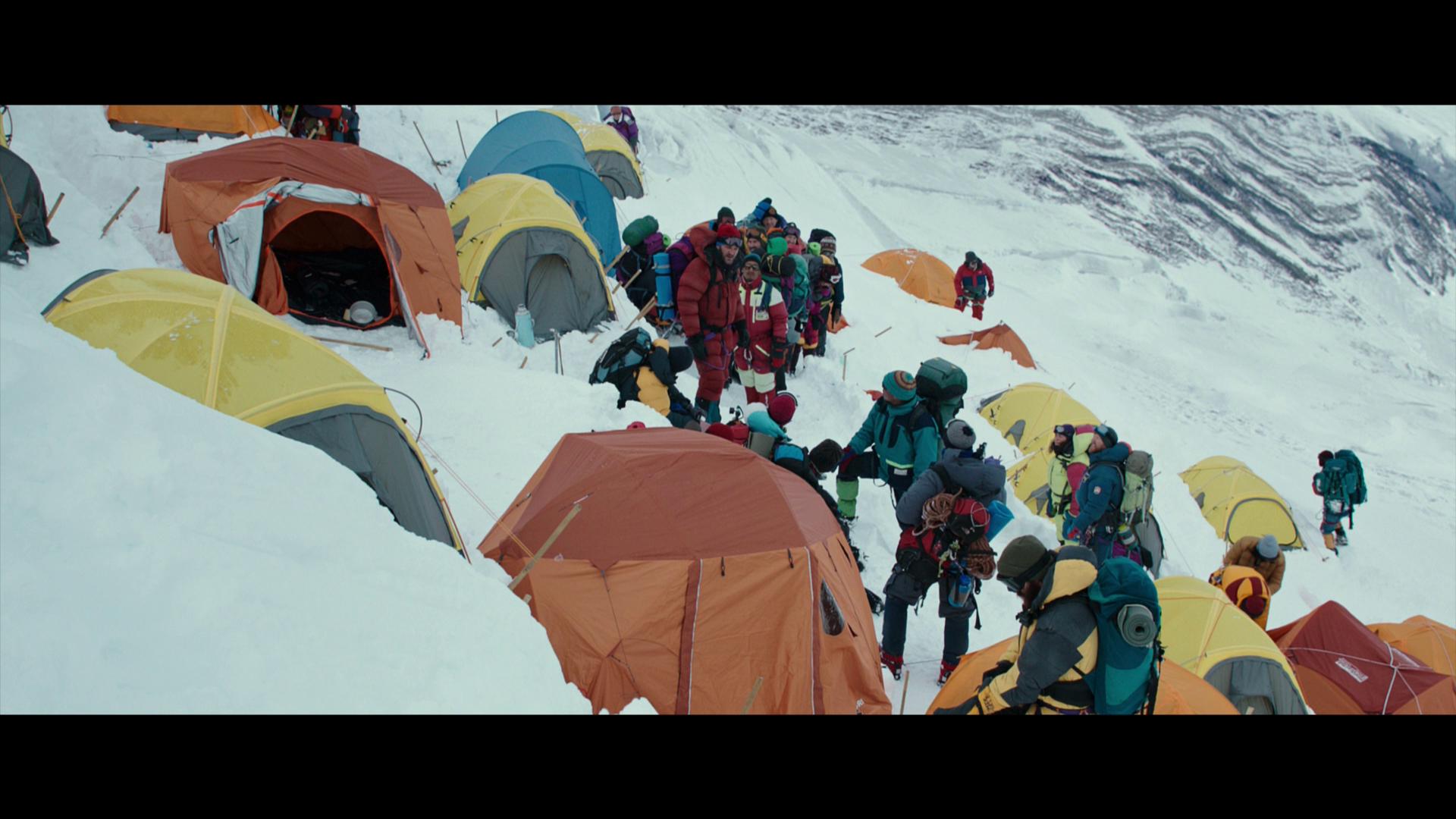 Packaged with a Dolby Atmos audio track, Everest sounded absolutely phenomenal as it played out through my home theater system.  Making use of every channel possible, offering a significantly immersive experience as we follow along with the climbers as they work together to reach their goal; it really felt as if we were right there climbing the mountainside with them.  The overall silence outside of the struggles the crew went through was bone-chilling, and I could fathom what it would be like to be up there with the elements like that.

Everest comes packaged in your typical 4K UHD amaray case.  Within that case is the standard 4K UHD copy of the film, a standard Blu-ray copy of the film, as well as a digital copy redemption pamphlet that allows consumers to add the film to their digital library.  The discs do not feature any artwork whatsoever, any only contain the necessary text for the film itself.  There is also a slipcover that’s been made available during the initial print run of the film; however the initial print run is still widely available for this format. 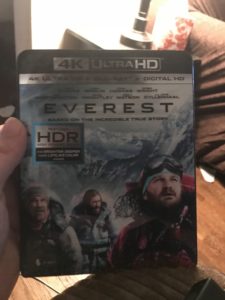 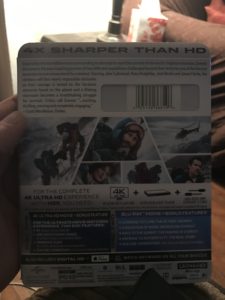 I was pleasantly surprised to see that Everest did include an audio commentary track with Director Baltasar Kormakur on the 4K UHD disc.  Unfortunately, that is the only feature that’s available on this disc, and all other special features are made available on the included Blu-ray disc.  Included with this release, is: 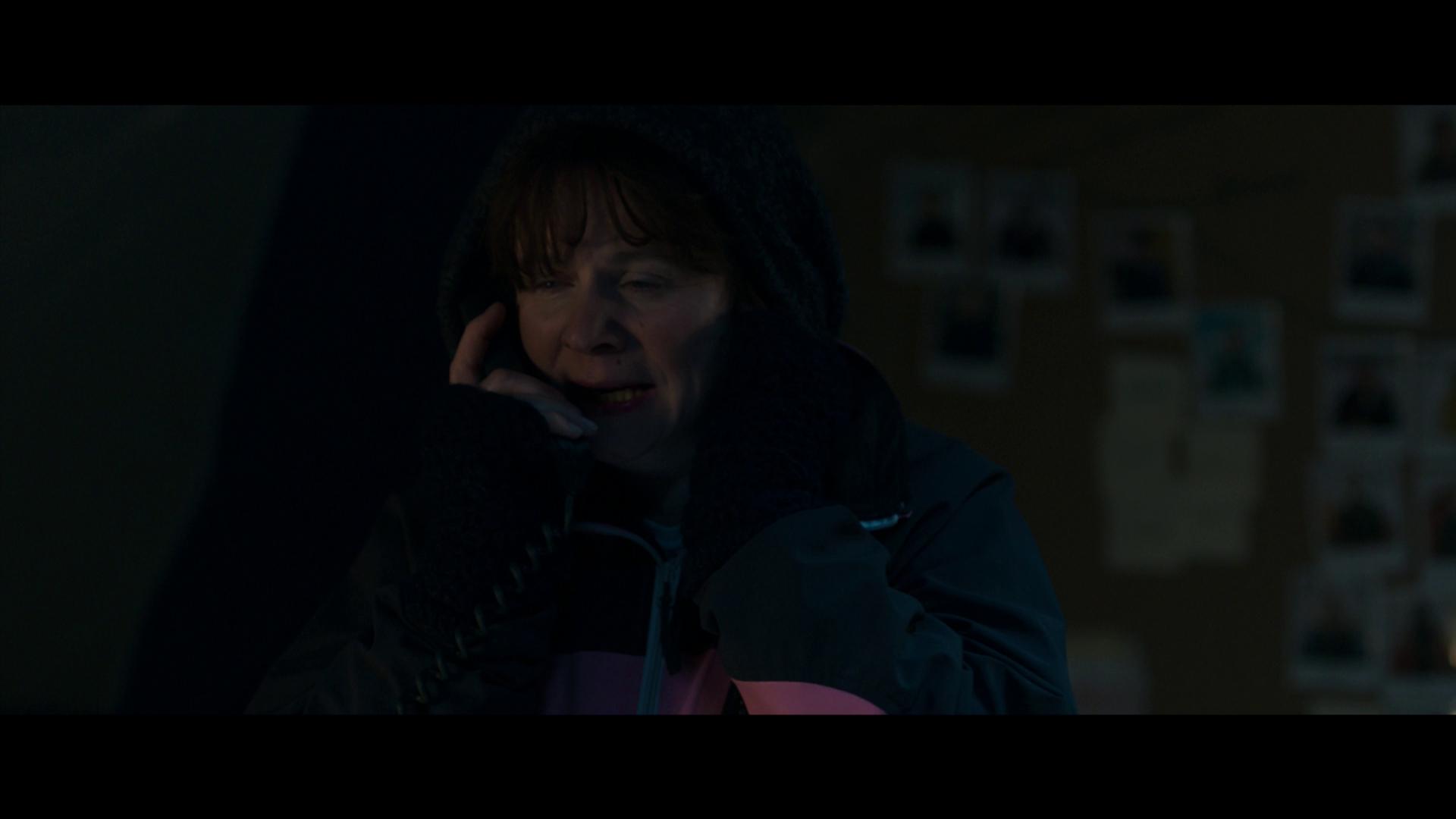 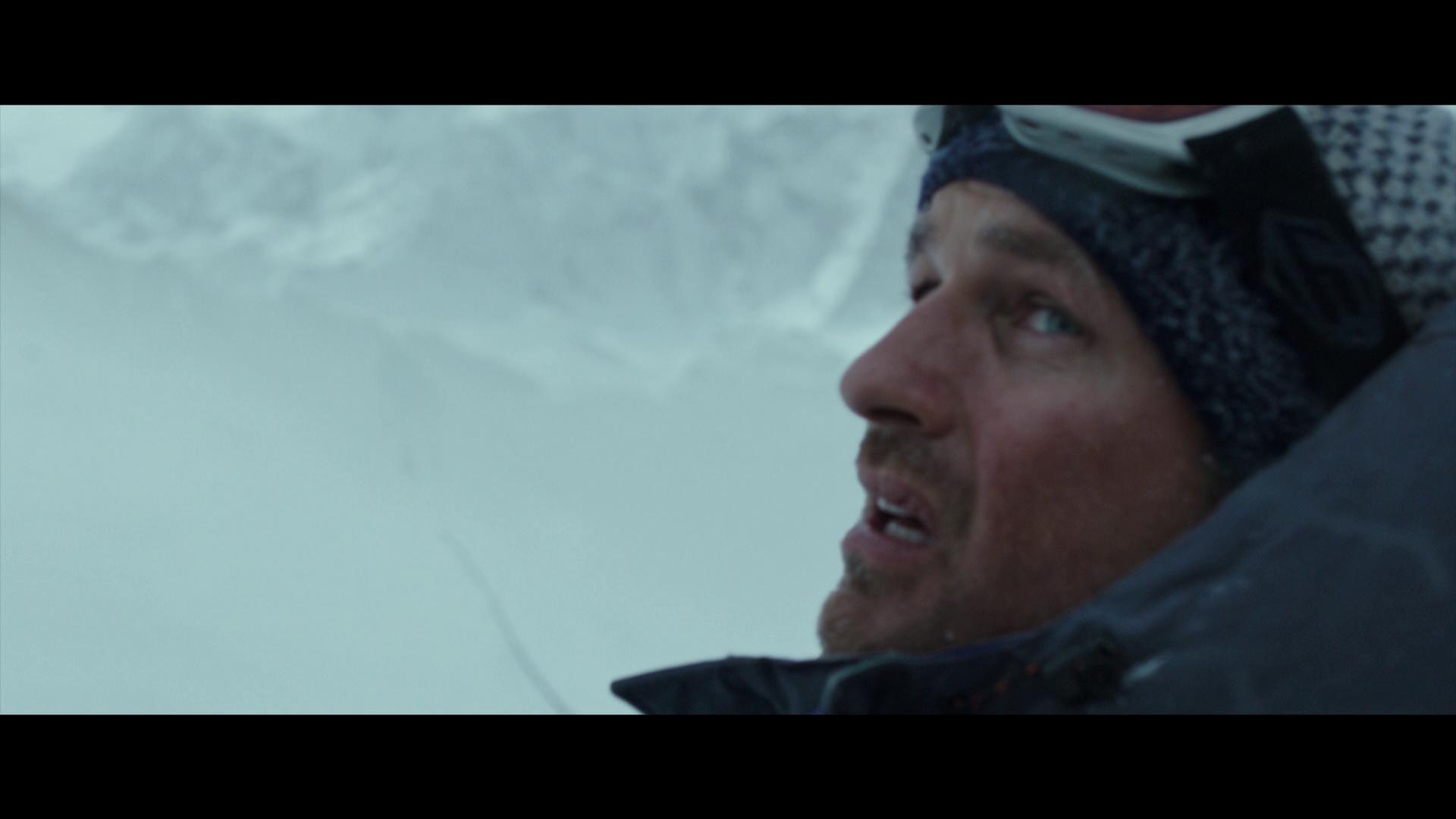 Overall, Everest was a great experience.  As my wife and I watched through this film, we were able to visually see and audibly hear and experience the overall strain that goes into achieving that goal of reaching the summit of Mount Everest.  Seeing all of the work that goes into doing something like this, not only by the climbers, but those who stay behind and man the radio in case of an emergency, it truly is quite the achievement to successfully make it to the top.  The overall picture quality of the release was okay as it was definitely a clearer picture than the standard Blu-ray copy of the film, however the use of HDR in this release really wasn’t the best.  The audio presentation was definitely top notch.  There’s a decent amount of additional content to allow people to explore the story and the work that went into creating this film further.  If you’re on the fence about picking up Everest on 4K UHD, I’d only recommend grabbing it while it’s on sale for less than $20.