Empire Records is one of those films that came out at just the right time, and encapsulated just the right kind of vibe and energy, that I feel conflicted. On one hand, the film’s plot is an absolute mess, with some really weird tonal shifts and implausible events that really drove me nuts. On the other hand, it captures this time period at the end of the 90s where record stores almost had this mythical aura around them, as well as many other coming of age style conflicts that are so easy to relate to and understand. I’m torn. 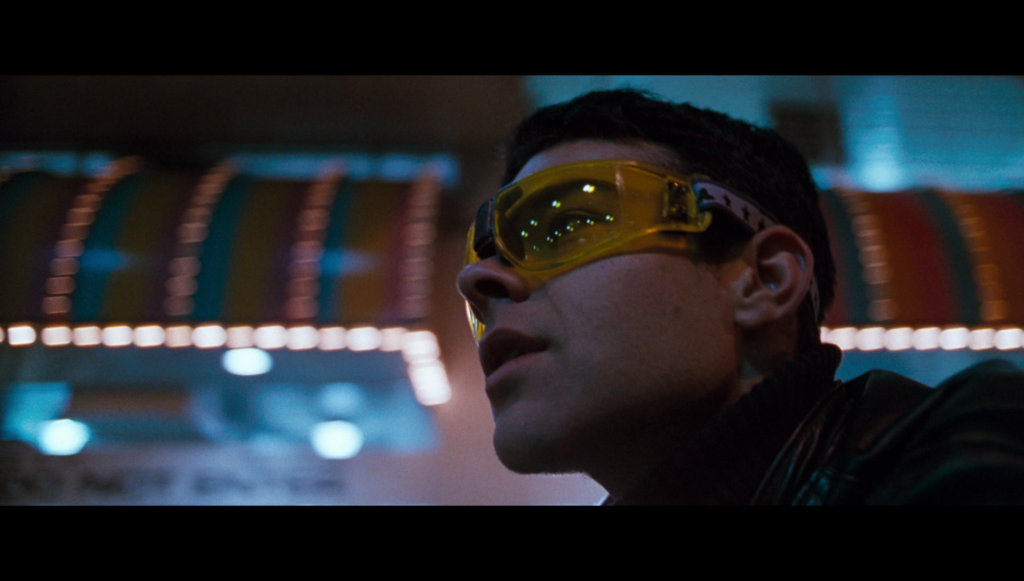 Empire Records is the story of a group of friends who all work together at a local record store, with their manager, Joe. After the quiet, mysterious kid of the group, Lucas, runs off to Atlantic City, and loses nine grand trying to save their store from a corporate takeover, the group of employees must find a way to make the money back or risk losing their favorite hideout. At the same time, a washed up musician is making a surprise appearance, and the store must facilitate his appearance. Parallel to that, one member of the group, A.J. is struggling to express his feelings for fellow coworker Corey. Somehow, in ninety minutes, we also cover topics like shoplifting, teen suicide, drug abuse, and various disastrous ways of trying to fit in and feel comfortable in our own skin.

Empire Records tries to do way, way, waaaaaay too much in its brisk 90 minute runtime. It covers topics such as depression and suicide, and drug abuse in a few minutes, and tries to inject too much comedy to fill in the gaps between these sorts of sketches, which could have been better spent attempting to flesh out and discuss these relevant teen issues in a satisfying way. The movie just keeps on chugging along, throwing issue after issue at us, and then moving on, into a fun, yet sort of unjustified finale. The script is fairly cheesy, and it feels trapped in the 90s, in the best/worst way.

For all of its flaws, and everything that works against it to make it a memorable movie, I couldn’t help but feel like I wanted to live in this world. Having been born in 1995, I missed out on the era of large brick and mortar record stores, and being an avid record and movie collector, this is exactly the kind of place where I feel that I could have totally thrived. The characters are goofy and hollow, and don’t make for exactly incredible cinematic characters, but they feel like people that I know, and people that could actually exist. Empire Records does an incredible job of encapsulating a long lost era, one that I will never get to know.

On top of that, the film features an incredible use of licensed music. The 90s alternative, and 80s tunes that are peppered throughout the entire film are of the highest quality, and as a movie about a record store, it brings out the guns, reminding me of the music styles that I heard in record stores when I was a little kid. If anything, this film is worth your time just to hear the forgotten artists that modern music has moved on without, another testament to Empire Records’ quality as more of a time capsule than a cinematic classic. 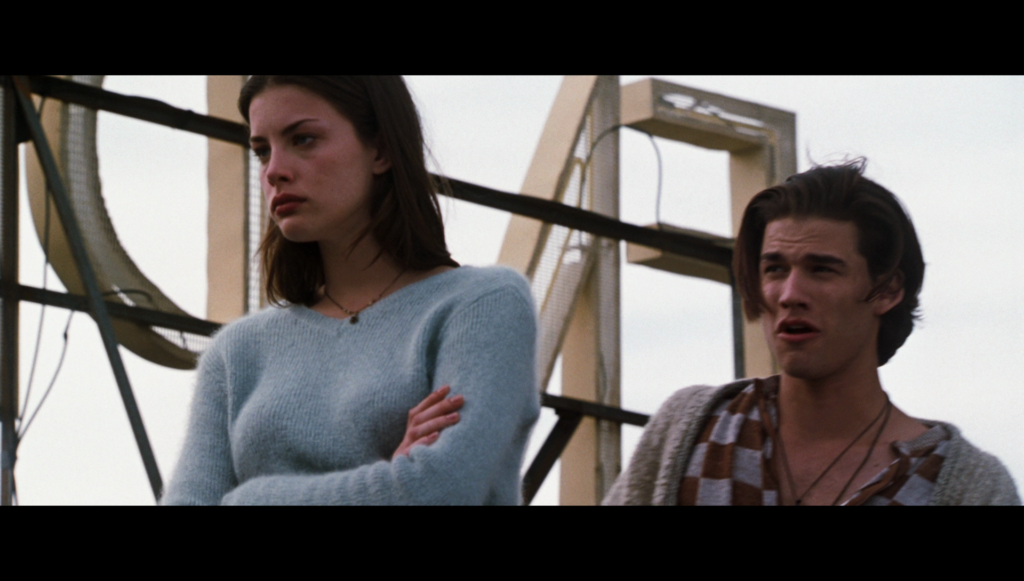 Empire Records was allegedly edited heavily by the studio in post-production, removing up to 40 minutes of footage, and 3 characters in their entirety. I only wish we could get to see that extra footage, some of which was integrated into an earlier DVD release, but the Blu-ray only has the 90 minute theatrical cut, which is nothing but a disappointing movie. The film stands better as a time capsule, and soars based on its nostalgic qualities rather than its narrative chops. I’m rating this one as a solid 2.5/5, but it could easily be a 3.5/5 for those who grew up with the film. As an outside who never lived in the era, the narrative issues drag it down significantly, but I still found myself enjoying the film for the most part. Tread lightly with this one.

Empire Records was shot on 35mm using the Super 35 format, which records using the entire rectangle 4-perf 35mm frame in spherical format, and crops to 2.35:1 in post. The film was processed photochemically, and released to theaters using a 2.35:1 aspect ratio. This Blu-ray, which is a Fox Home Video release of a Warner Brothers’ film, is presented in 1080p, maintaining the 2.35:1 theatrical aspect ratio. 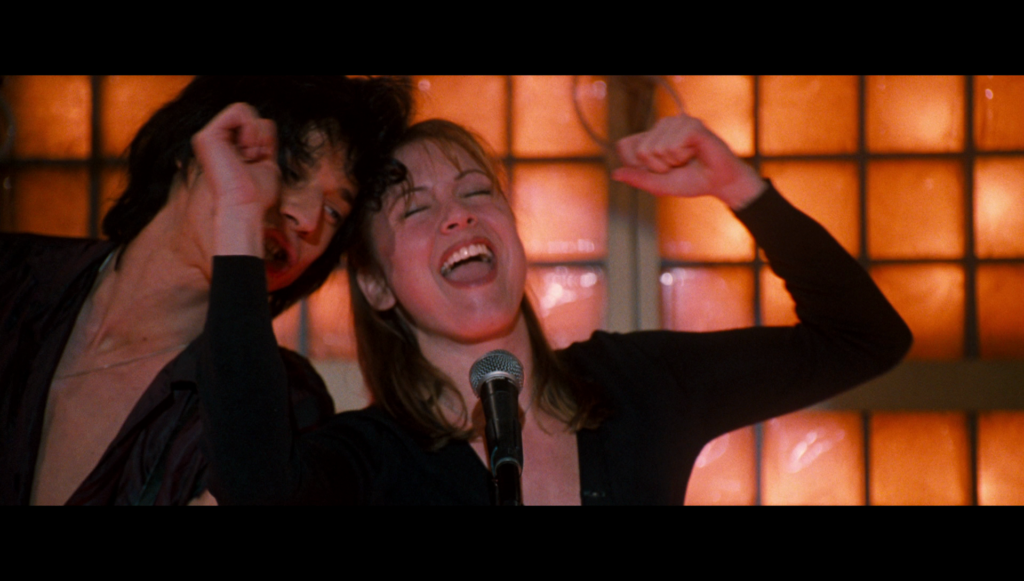 Empire Records was a fairly low budget effort for the time period, and because of the way the film was processed, the image never really comes off as sharp or detailed, but never looks aggressively soft. It sits in that weird middle ground that many films in the 90s shared. The film rarely cuts to close ups, but when it does, there’s a moderate amount of detail to be had. The color is excellent, with a nice level of saturation. Grain is maintained throughout the transfer, looking rather natural. Empire Records will never impress or be treated in the same way that other 90s catalog films will, but what we have here is decent for such a budget release.

Empire Records is presented in 5.1 DTS-Master Audio on this Blu-ray. The film was released to theaters with a 5.1 Dolby Digital mix, so it is safe to assume that this transfer is based off of that source. 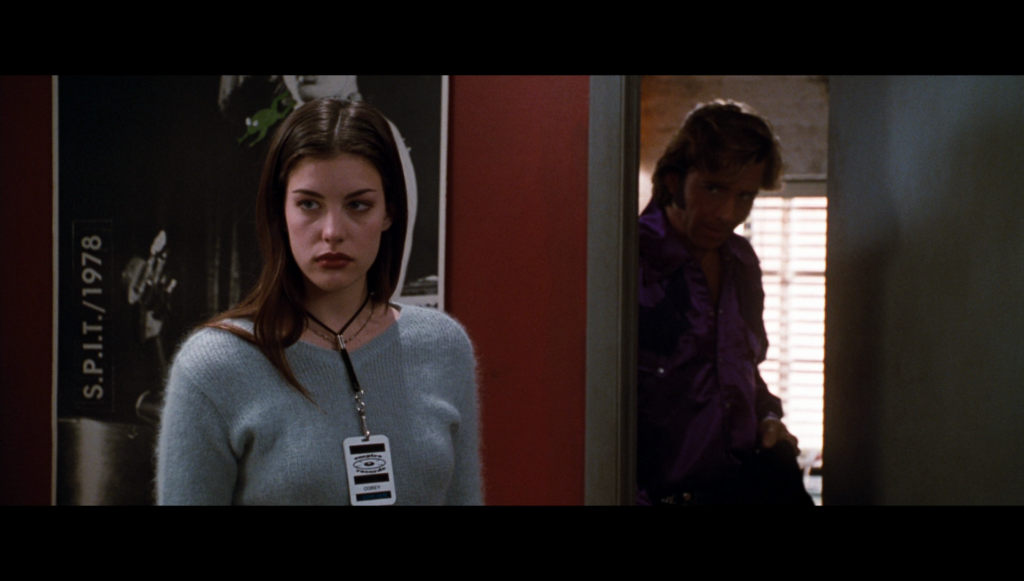 For a movie about crowds and music, Empire Records feels awfully restrained in terms of exploring the surround sound space. Most of the action is restricted to the front speakers, with minimal surround action. The licensed music comes across loud and clear, sounding crisp as it propels the film onwards. The film on occasion uses excellent dialogue panning, a technique that is a personal favorite of mine. There is little subwoofer activity to speak of, and the sound design never really opens up, even when large crowds amass. It feels like a bit of a missed opportunity.

Empire Records, released on Blu-ray by Fox Home Video, is presented in a standard blue keepcase. The front artwork features a version of the film’s theatrical poster set against a blue circle pattern. The back case art features some pictures of the film’s two leading ladies, a couple of paragraphs about the film, info about the special features and technical info on the release. This one appropriately looks and feels like a budget release. Nothing special here. 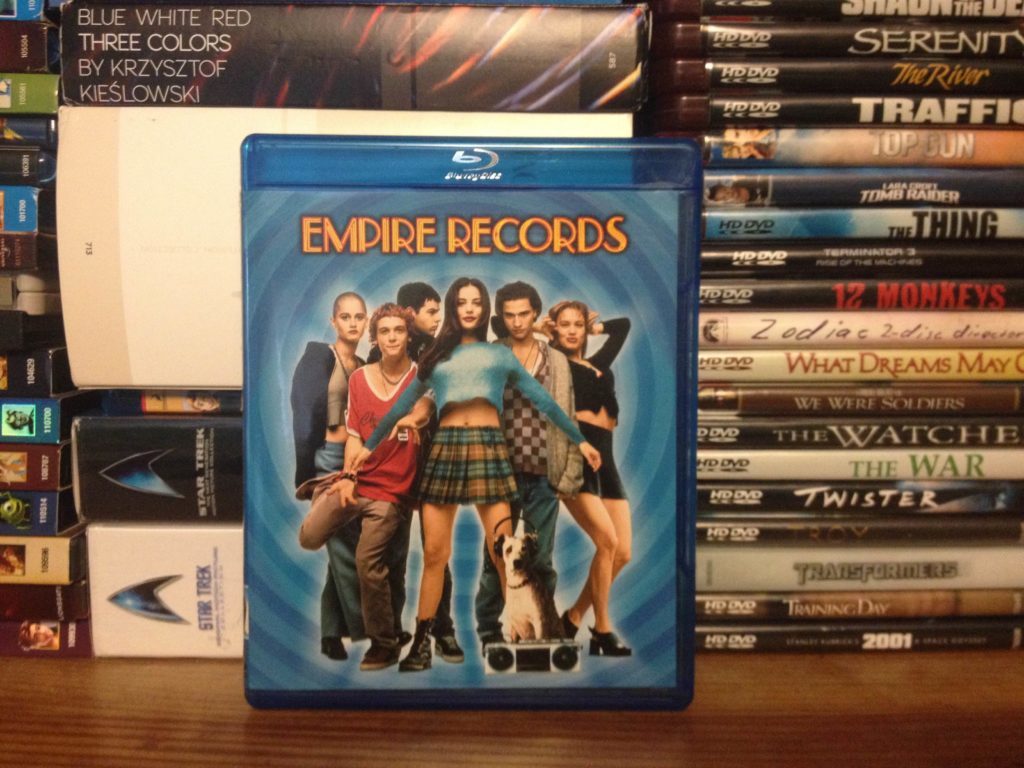 The Special Features are almost worse than the packaging. They are as follows:

Deleted Scenes – a handful of deleted scenes that give a glimpse into the style of character development and plot that the director originally wanted the film to have. Unfortunately, it looks like they’ve been sourced from a VHS tape that’s been run over by a steamroller. It makes my Laserdiscs look……good. 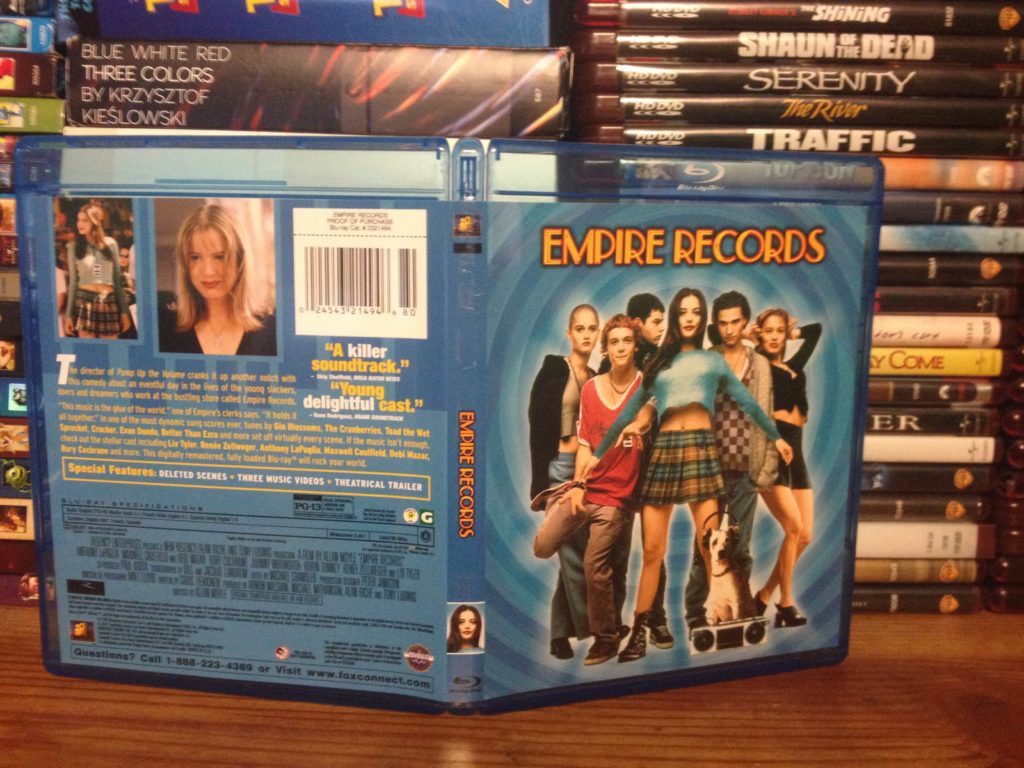 Three Music Videos – 3 music videos, 1 by the film’s character Max Manning, and two sourced from live character performance by the band Gwar, one which was featured in a short sequence in the film. Again, the standard definitions look disastrous, and make the videos rather difficult to enjoy using an HDTV.

Theatrical Trailer – the standard 90s issued trailer. Sourced from a fairly good looking master, with little damage. Looks to be an HD video transfer, but it’s nothing special. 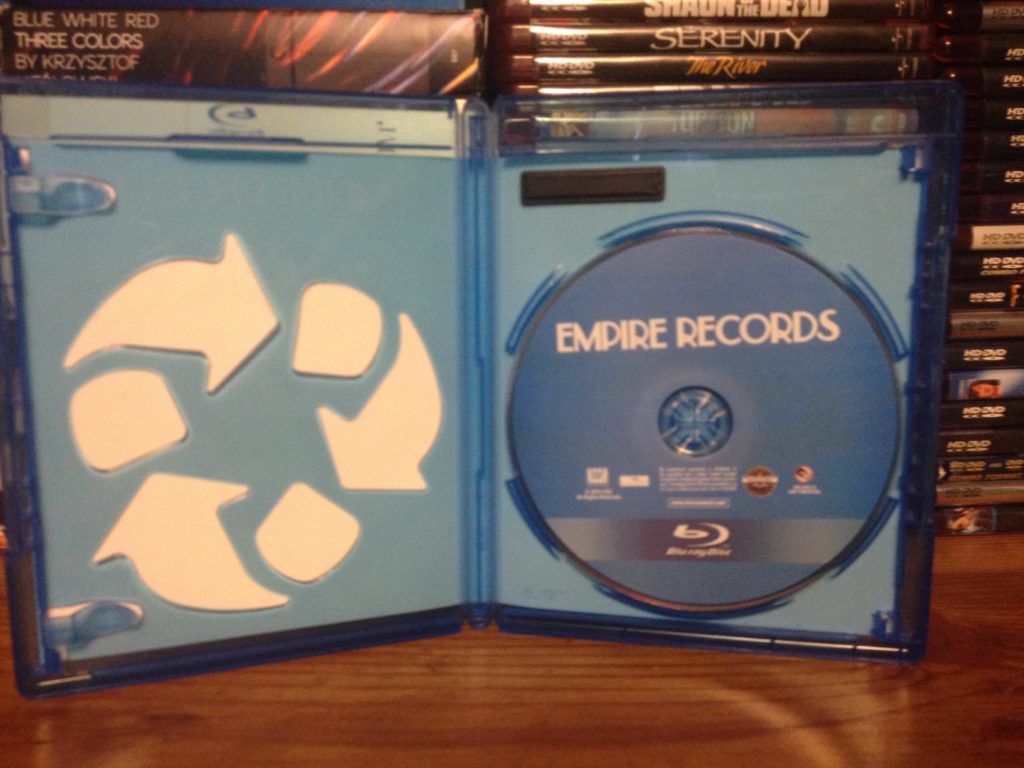 Overall, the packaging is pretty weak, and the special features are short, and unfulfilling. They couldn’t have done more to make it look like a low priority release for the studio, short of putting, “Budget Release,” on the packaging.

Empire Records will come off as pure nostalgic joy to some, and to others as a train wreck of a movie, and yet, I don’t feel as if I’ve wasted my time. The movie has some very entertaining moments, and does a good job of encapsulating and era and scene that no longer really exists anymore. The acting, while nothing crazy, is adequate, and the movie’s use of licensed music is excellent. The film, which features merely average video and audio, is dragged down by dismal packaging and special features.  This one is really for fans only, but at its current price point, might be worth it, to satisfy any curiosities you might have concerning the film.